From the
Design of 1876
Lord Kelvin & James
White 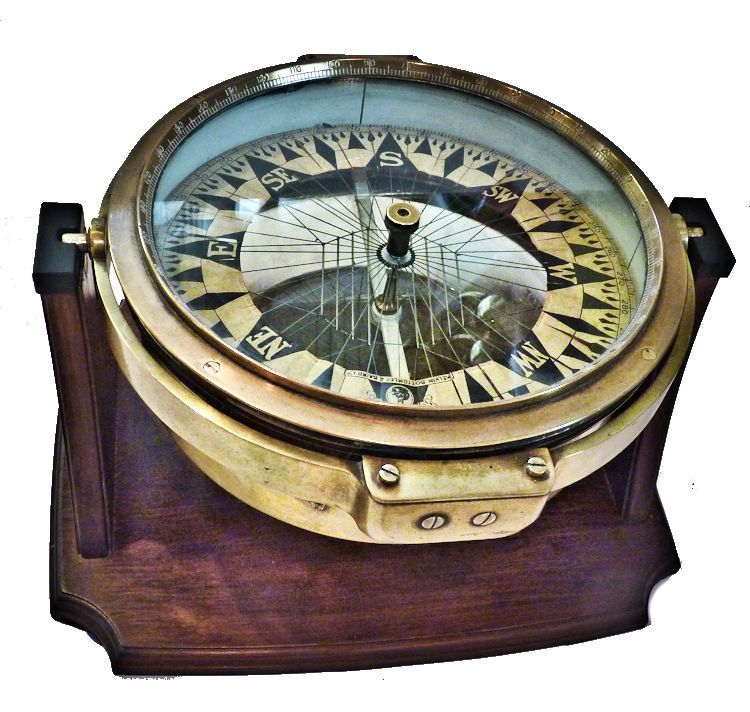 Guaranteed
Museum Quality This
is a very rare piece of maritime history with a
pedigreed heritageof historic men and companies. Suitable for a
Prestige Gift

made bySir William Thomson and James White, his long time partner, whose laboratory executed many of his designs and inventions. Thomson later became Lord Kelvin of Largs. This rare compass is an example of the design which was introduced in 1876, and is in remarkable original condition, complete in all respects. James White was Kelvin’s original
partner from the time he began his first experiments with the magnetic compass which made him famous.  In 1913, Kelvin &
James White Ltd became Kelvin Bottomley & Baird Ltd, a name under which they operated until 1947.See the history
below. This example is mounted in a contemporary custom made Cherry display stand. The huge compass is housed
in a large bronze bowl with bronze bezel, brass banded upper structure and crystal glass lower section which is
inscribed with the name Kelvin & James White Patent over Registered.  The patent referred to was issued in
1876 and updated in 1889. We were privileged to sell the patent application of that year and the accompanying model in
2010. Ref. https://landandseacollection.com/id591.html 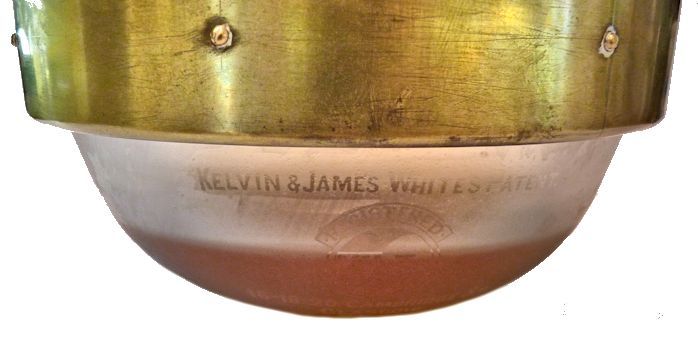 Few of these threaded compasses have survived, and the later versions with the mechanical
bellows are the ones most seen. They where quickly made obsolete when World War One loomed on the horizon. The design of this compass of Kelvin, Bottomley & Bard dates back to about 1903, and was likely made prior to theamalgamation and well before Kelvin- Hughes was formally merged into Henry Hughes & Sons in 1947, and much later into Smith Industries. (See company’s history below)

This compass is a larger
version of the one that was from the Clipper Ship Flying Cloud
that was offered at auction by Bonham’s Nautical Auction in
2004 for $8000.00

THE CARD: The card is made from paper, beautifully
engraved with an elaborate Fleur des Lis at the North
point with the number 958 on its side. The paper is cut,
approximately every 20 degrees to allow for it to be suspended
from the center pivot point by silk threads which are attached
to six magnetized needles.

The compass rose
shows the eight cardinal points and is further divided to 1/16
points and then to 32. On the outer perimeter are degrees that
are graduated from 0 to 90 degrees for each quadrant. It
measures 10 inches in diameter and has a finely made brass
center cap This complex arrangement was supposed to
reduce drag and make the compass less sensitive to the
pitching, rolling and course variations of a ship.

There is a lubber’s line with arrow that
marks the course to which the ship’s head is pointing.
There is a
bronze bezel with two holders that accept the pinions of the
compass bowl and serve as the means of attaching it to the
display stand. There is no box with this compass.
CONDITION: The compass card,
bowl, and bezel are in superb working condition and
all of the threads are intact. All the paper is
in place and the imprints are sharp and distinct. The frosted glass bowl is partially full of oil which acts as
balast to keep the compass level.
Overall it is in extra fine condition and of museum quality.
It is suitable for a prestige gift.

View
showing gimbals and the side of the
stand This important compass should appeal to a collector
seeking only the most unusual and best for a world class
collection.

BRIEF HISTORY OF
INVENTOR: William Thomson (1824-1907), Lord Kelvin of Largs
William
Thomson was a mathematical physicist, engineer in the physical sciences
of the 19th century. He did work in the mathematical analysis of
electricity and thermodynamics, and did much to unify the emerging
discipline of physics in its modern form. He is widely known for
developing the Kelvin scale of absolute temperature measurement. In
1892, the title Baron Kelvin was given in honour of his achievements,
and named after the River Kelvin, which flowed past his university in
Glasgow, Scotland. He also
enjoyed a second career as a telegraph engineer and inventor, a career
that propelled him into the public eye and ensured his wealth, and, fame
and is widely known in the marine industry for his work on the magnetic
compass. MARINE ACCOMPLISHMENTS
& COMPANY HISTORY:Thomson was an enthusiastic yachtsman,
his interest in all things relating to the sea.
Thomson
introduced a method of deep-sea sounding, in which a steel piano wire
replaces the ordinary land line. The wire glides so easily to the bottom
that “flying soundings” can be taken while the ship is going at full
speed. A pressure gauge to register the depth of the sinker was added by
Thomson. About the
same time he revived the Sumner method of finding a ship’s place at sea,
and calculated a set of tables for its ready application. He also
developed a tide predicting machine. During
the late 1870’s, Thomson worked to perfect the adjustable compass in
order to correct errors arising from magnetic deviation owing to the
increasing use of iron in naval architecture. Thomson’s design was a
great improvement on the older instruments, being steadier and less
hampered by friction, the deviation due to the ship’s own magnetism
being corrected by movable masses of iron at the binnacle. Thomson’s
innovations involved much detailed work to develop principles already
identified by George Biddell Airy and others but contributed little in
terms of novel physical thinking. His energetic lobbying and networking
proved effective in gaining acceptance of his instrument by The
Admiralty. The origins of this compass lie in the highly
successful, but informal, relationship between William Thomson
(1824-1907), Professor of Natural Philosophy at Glasgow University from
1846-1899 and James White, a Glasgow optical maker. James White
(1824-1884) founded the firm of his name, in Glasgow in 1850. White was
involved in supplying and repairing apparatus for Thomson’s university
laboratory and working with him on experimental models. Thompson had a
long association with James White. From 1876, White was producing compasses for metal
ships to Thomson’s design. White was also involved in the production of
Thomson’s other designs for laying cables at sea. White’s association
with Thomson continued until he died, and their company continued as
Kelvin-White.

In 1884 Kelvin raised most
of the capital needed to construct and equip new workshops in Cambridge Street, Glasgow. At the Cambridge Street premises, the company continued to make the compass Thomson had designed during the 1870s and to supply it in some quantity, especially to the Admiralty. At the same time, the firm became increasingly involved in the design, production and sale of
electrical apparatus.  In 1899, Lord Kelvin resigned from his University chair and became, in 1900, a director in the newly formed company,
Kelvin & James White Ltd which incorporated the business of James White. At the same time, Kelvin’s nephew, James Thomson Bottomley
(1845-1926), joined the firm.  Kelvin & James White Ltd underwent a further change of name in 1913, becoming Kelvin
Bottomley & Baird Ltd. Following the formal amalgamation of In 1947, Kelvin, Bottomley & Baird Ltd and Henry Hughes & Sons Ltd
combined to form Kelvin & Hughes Ltd., and in 1964 became a part of Smith’s Industries Ltd. Some marine historians portray Thomson as a man of undoubted talent and enthusiasm, with some genuine knowledge of the sea,
who managed to parlay a handful of modest ideas in compass design into a commercial monopoly for his own manufacturing concern, using his exulted personal reputation to repel even small claims of originality from others, and persuading the Admiralty and the law to overlook both the deficiencies of his own design and the virtues of his competitors.  Edited and corrected from Wkiipedia and other sources.