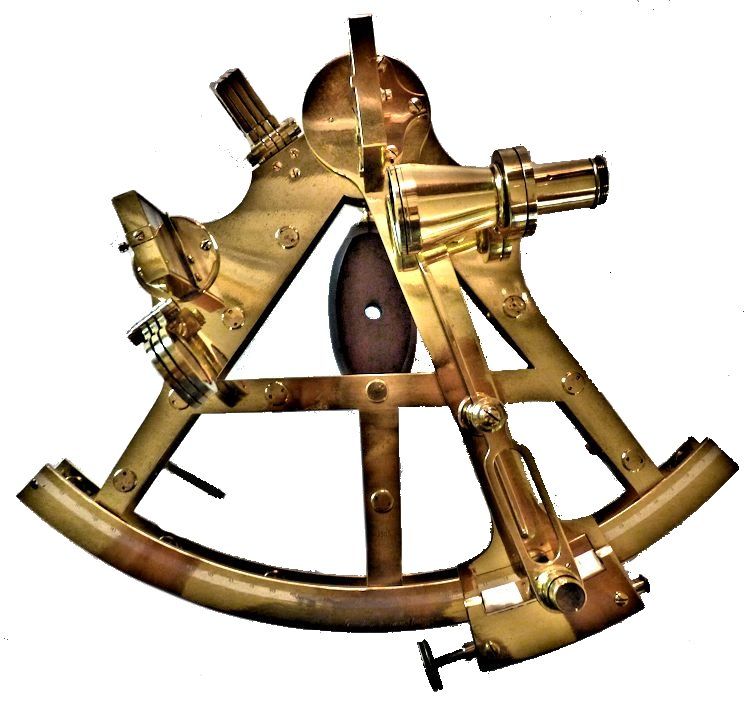 TROUGHTON & SIMMS
were the best of the English instrument makers. This is perfect for a collection of only the finest nautical antiques
or as an important gift

Copyright 2014 by Land And Sea Collection™
All Rights Reserved

PRESENTED is an
instrument that is so rare and special that it can be considered a remarkable vestige  of the last quarter of the
19th Century. This is only the third time we have had the pleasure of offering a double frame instrument which is resplendent
in its polished appearance.  It is made to the highest British standards and is numbered 35XX on its index arm.
It has an an arc that subtends 160 degrees which classifies it as a quintant. Brass, being much stronger and more rigid than
wood, became the material of choice for sighting instruments.  Edward
Troughton patented the design in 1788.The double frame sextants were expensive to make and never gained the popularity
of the more common single, cast-framed instruments, and consequently are rarely available. For example, this is the third
instrument of this type that we have offered in eleven years. See https://landandseacollection.com/id780.html for the previous one we sold in 2011. 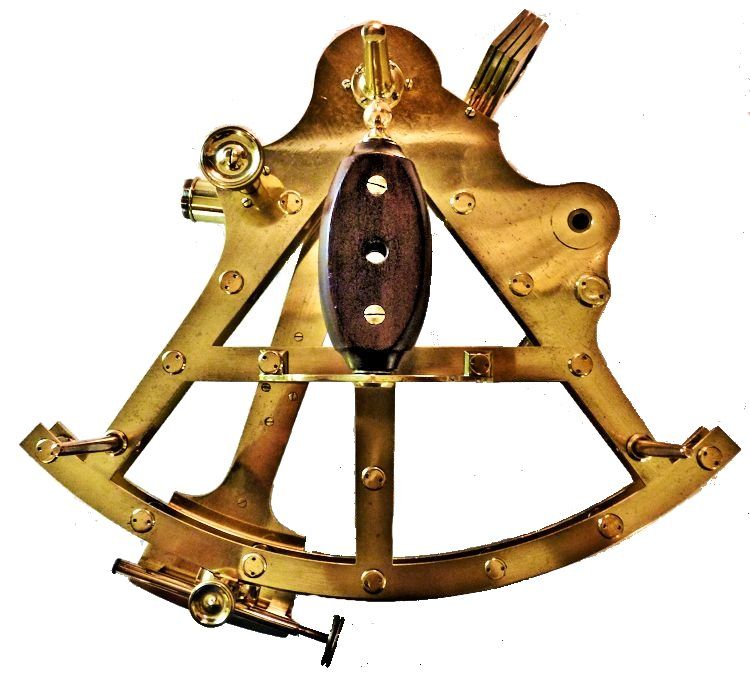 The sextant has a
polished brass straight-bar pattern pillar frame, mounted with twenty one pillars over a second frame with various
fittings and mounts, and a wooden handle. The tangent screw and clamping screw are positioned on the back of the index arm.
The device has four index shades, and three horizon shades. The telescopes are threaded and attached to a perpendicular rising-piece
which is adjusted in and out by a milled knob. There is also a magnifier traveling over the vernier. The star telescope is
2.42 inches in length when closed with an erect image. A second telescope is 3.19 inches in length with an erect image. The
polished brass limb is inlaid with a platinum scale from -5° to 160° by 5 arc minutes. The platinum vernier measures
from left to right by 10 arc seconds. Edward Troughton patented the pillar and plate frame instrument No. 1644 in
1788.

THE CASE: The instrument and
its accessories are housed in a high quality Mahogany box with a hand rubbed finish.  It has a  two hooks and is
missing a segment of its lock and key. The interior of the case has a wood holder for the second telescope. The interior is finished
in high gloss varnish.  The box is missing a two inch by 3/8 inch piece of wood at the back right outside along
the hinge. The key pate on the front of the box has the famous C. Plath “Sunshooter” logo and its hardware is also
by C. Plath. 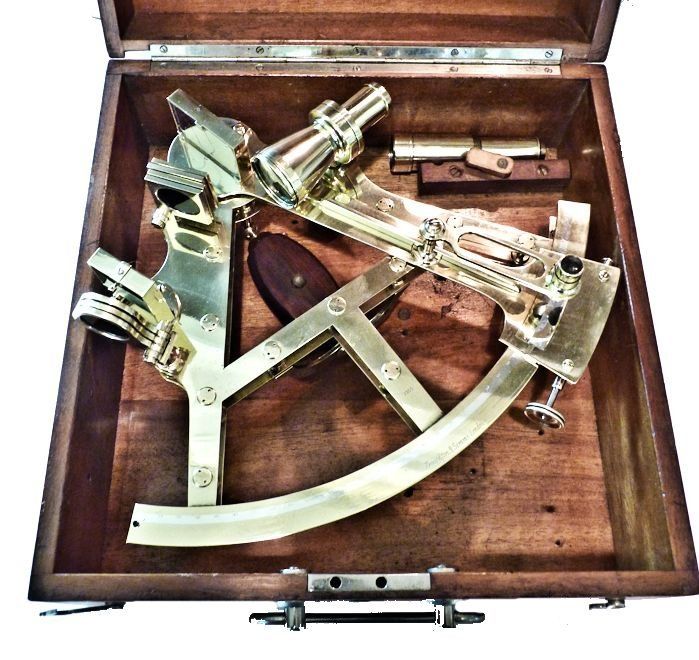 INSTRUMENT CONDITION: The instrument has been polished and lacquered
to a high luster and presents a dramatic appearance. It is ideally suited to be given as an important gift. Both
mirrors, considering their age, are in very good condition. There is a small  washer that is missing from the back of
the horizon mirror, but it does not affect the mirrors use or position. The
swing arm magnifier is complete and in good working order. Both sets of shades, i.e., filters are without imperfections.
TROUGHTON & SIMMS,
THE MAKER: Troughton & Simms
was a British instrument-making firm, formed when Edward Troughton in his old age took on William Simms as a partner in 1826.
It became a limited company in 1915, and in 1922, it merged with
T. Cooke & Sons to form Cooke, Troughton & Simms. The
firm produced hundreds of astronomical instruments such as mural circles, transit circles, sextants, and other astronomical
instruments for observatories around the world. Previously, Troughton
had been a sole proprietor, and before that he was in partnership with his brother John. John died and Edward took on Simms
in 1826. Edward Troughton died in 1835.
Ref. This maker
is is listed in Sextants at Greenwich”, “Sextants at Greenwich” by W.E.J. Mozer Bruyns, which
catalogs the collection of the British National Maritime Museum at Greenwich, England.
Edward Troughton FRS (October 1753 –
12 June 1835) was a British instrument maker who was notable for making telescopes and other astronomical instruments.
Troughton was born at Corney, Cumberland. In 1779, after serving
an apprenticeship with his elder brother John, he became his partner and soon established himself as the top maker of navigational,
surveying and astronomical instruments in Britain.
In 1795 he delivered the Troughton Equatorial Telescope
to the Armagh Observatory, a 2 inch aperture refractor telescope mounted equatorially, and its first major instrument since
its founding in 1790 (It survived into the 21st century also). [2] He created the Groombridge Transit Circle in 1806, which
Stephen Groombridge used to compile his star cataloger.[3] He did not merely build instruments, but designed and invented
new ones.
Troughton was awarded the Copley Medal of the Royal
Society in 1809. He was elected a Fellow of the Royal Society in March 1810. In
1826, after John’s death and in failing health himself, he took on William Simms as a partner and the firm became known
as Troughton & Simms. Troughton was color blind. On his death in
1835, he was buried in Kensal Green Cemetery.
William Simms (7 December 1793 –
21 June 1860) was a British scientific instrument maker.

He was born in Birmingham, the second of nine children of William
Simms (1763-1828), an instrument maker. Soon after William Simm’s birth the family moved to London so that William Simms
Sr. could his ailing father, James Simms, who had a jewelery business in Whitecross Street. This business was soon converted
to the manufacture of optical instruments. William Sr. prospered and in 1804 he was elected a Freeman of the City.

Career
a Freeman of the Worshipful Company of Goldsmiths in 1815 and set up in business for himself, working until 1818 at his father’s
Blackfriars premises. His elder brother James was already establishing his own reputation for navigational instruments. William Simms’ chief interest was the division of the circle, the accuracy
of which was essential to the manufacture of accurate scientific instruments. He became a correspondent of Thomas Jones, who
brought him into contact with the instrument maker Edward Troughton and also persuaded him to join the Royal Society for the
encouragement of Arts, Manufactures & Commerce. Here he met the engineer Bryan Donkin, and also Colonel Colley of the
Ordnance Survey. Simms became Troughton’s partner in 1826 and on his retirement took over his business, which had a very
good reputation in the manufacture of scientific instruments.

Simms specialized in surveying instruments and from 1817 supplied
theodolites to the Ordnance Survey and then to the East India Company, including those used by George Everest. On a larger
scale he supplied telescopes, mural circles and other astronomical instruments to observatories at Krakow, Madras, Cambridge,
Lucknow, Calcutta, Edinburgh, Brussels, Greenwich and other places. By the close of his career he had supplied most of the
world’s leading observatories with equipment. Simms’
work formed the basis of the treatise on mathematical instruments written by his younger brother Frederick Walter Simms, who
went on to become an important writer on civil engineering.

His reputation was enhanced by the improvements he made to graduating
instruments and his self-acting circular dividing engine reduced the work involved in manufacture from weeks to hours. He
also helped standardize the measures of length the yard and chain for the Admiralty.

Simms was elected an Associate of the Institution of Civil Engineers
in 1828. He was a Fellow of the Royal Astronomical Society, which he joined in 1831, and elected a Fellow of the Royal Society
in 1852. Simms died at the family home in Carshalton on 21 June
1860 and was buried at West Norwood Cemetery. His family, most especially his son James Simms carried on his instrument making
work.