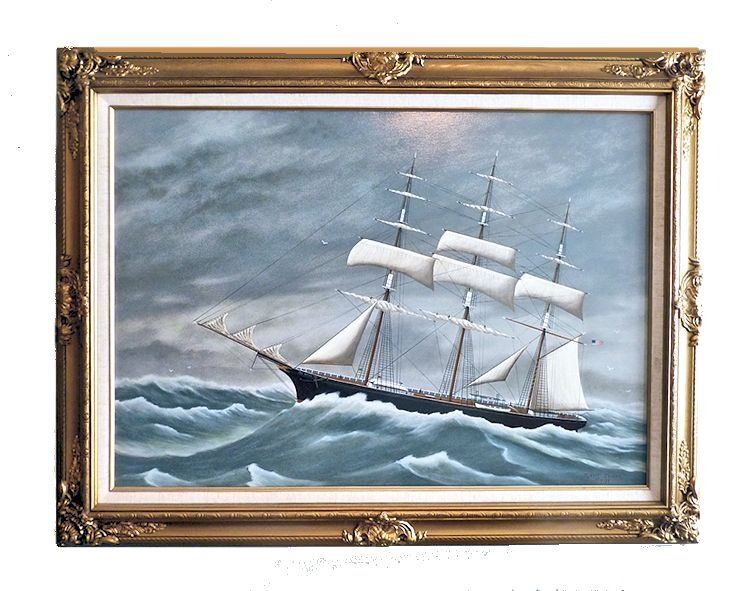 Louis Dianni, respected art expert and auctioneer, took
this to be a period work of an American sailing ship when viewed from a distance.The Sea Witch was an American clipper ship that was designed by naval architect John W. Griffiths for the China trading firm of Howland & Aspinwall. The artist has captured this genre in his painting.

Presented is an oil on canvas by the contemporary artist Robert Jordan of the famous American Clipper Ship Sea Witch, as she looked look in the 1860’s. The ship portrait is in the simplenon-dimensional style, of the China Trade School, in appearance. The grey, blue treatment of the sea and overcast sky lends to this moody scene of storm tossed seas. Sea Witch is under
shortened sail with her uppers furled, her outer jibs down and secured with only a few working sails and the mizzen course
to catch the wind. Her black hull has gold scroll work on the trailboard and on the rubbing
strake, with a black sheer line which is a typical scheme of this period. The figurehead was a Chinese dragon with an open mouth and a
partly coiled tail.  She is sailing close to the wind, gracefully cutting through fairly heavy seas with a “bone in her teeth”. There
is a rocky coast line off her starboard bow. The American ensign has 48 Stars,and the ship is shown hard over on the
starboard tack with the tiny ensign flying from her mizzen. The vessel’s name is on her bow. Only the
figures of three men remain on deck.< 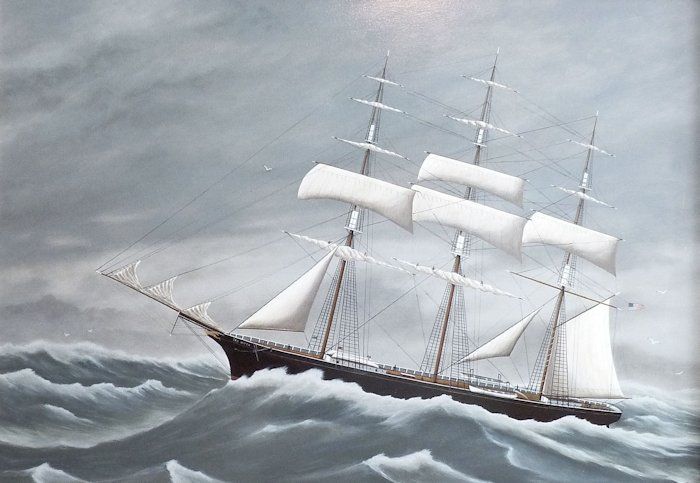 The sky is a hazy grey blue with a turbulent sea which sets the mood of this windswept
ship painting.  A heavy custom frame is included. The condition of the painting is without
blemish, front and back. It was purchased at auction in New England. 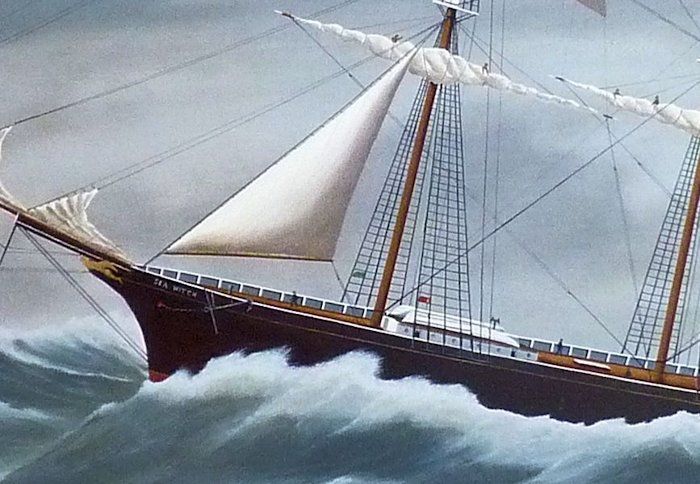 Close-up of Clipper Bow Section  shown over the stern section

Howland & Aspinwall gave the command of the Sea Witch to Captain Robert Waterman, known
in the trade as “Bully Bob” Waterman. In 1847, under Waterman, she made a record-setting run from Hong Kong to New York in
77 days. She lowered this record to 74 days under the same captain in 1849. This March 1849 mark is one of the longest-lived
human speed records, bettered only in May 2003 by the trimaran “Great American II” in 72 days and 21 hour. Sea Witch continues
to hold the Hong Kong-New York record for a mono hulled sailing vessel. Voyages. After gold was discovered in California, the Sea Witch’s owners, Howland & Aspinwall, transferred her from the China trade to the new Cape Horn run from the East Coast to San Francisco. In early 1850 the Sea Witch completed this passage in 97 days, the first vessel ever to do so in less than 100 days. Later in the 1850s the Sea Witch physically deteriorated and her place in the fast-freighttrade was taken over by newer vessels. The aging clipper ship was reassigned to serve as a steerage vessel carrying immigrantsto the Western Hemisphere. In 1856, with approximately 500 immigrants from China on board, she ran aground 12 miles (19 km) west of Havana.

Name:Sea WitchOwner:Howland & Aspinwall New YorkBuilder:Smith & Dimon, New YorkLaunched:Dec. 8, 1846       Sunk 1856 Fate:Wrecked on a reef 12 miles off Havana Cuba.  General characteristics Class & type:Extreme clipper  Tons burthen:908 tons  Length:170 ft. 3 in.Beam:33 ft. 11 in.Draft:19 ft.
ARTIST”S BIOGRAPHY:
There is no official published biography of this artist. Our research has determined the following: Robert Jordan showed at the Far Gallery in New York which is long gone. After his death some of his work
were sold by his sister at auction in 2008. Robert Jordan was said to be a gentle, creative artist by a number of those
that knew him in St. Louis. There he worked at the architectural studio of David Davis where he developed the field sketches brought back from locations near Taos, NM and S.
Conway, NH. Davis says Jordan donated a
large painting of his WWII bomber crew to the National Aerospace Museum soon after its opening. He seemed most proud when I returned from a visit to Washington DC, and recounted how his painting
had dominated the NAM gallery wall.  Davis says that years
later,he was told that.  Bob had died, and his sister
was caretaker of his inventory of unsold paintings. Upon departing the Davis studio, he had
moved from St. Louis, to North Carolina,