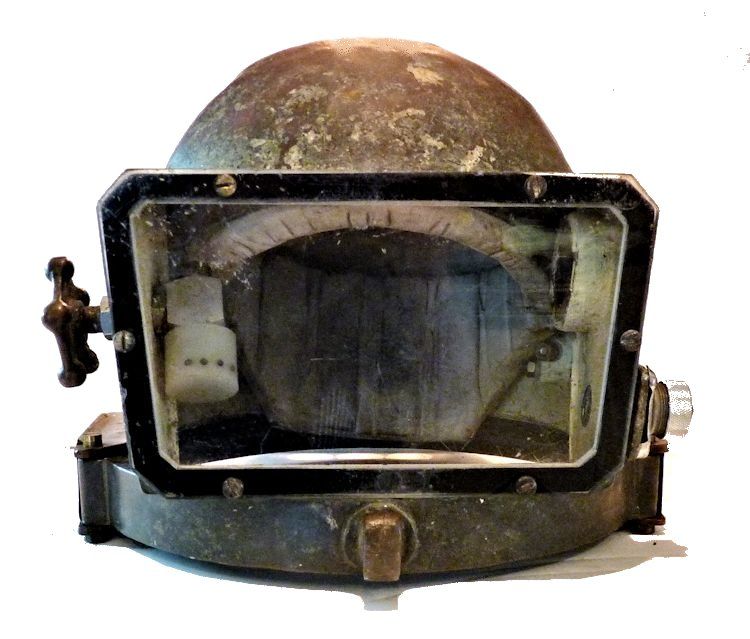 With Neck Ring and Near New Dam! 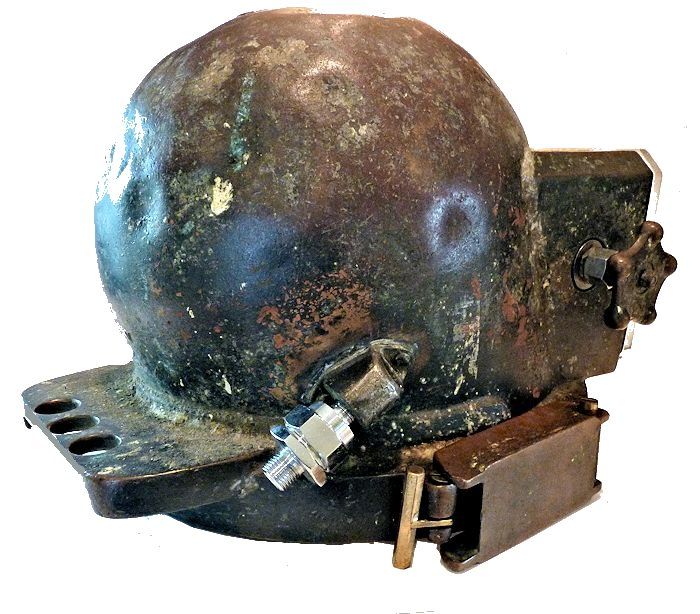 The DESCO Air Hat was designed in 1968, and has been continually upgraded to
meet the requirements of the Commercial Diving Industry. This is an older helmet which can be retrofitted to current
standards. The DESCO Air Hat design is said to maximize safety, durability, and reliability, while requiring only simple routine
maintenance and care.

DIMENSIONS:
11″H x 13″ W x  13″ D         Weight 28 pounds
Serial Number316
Presentedis
an old and well used DESCO New Generation style helmet called the POT by some and the Air Hat by the maker. It seems to be well taken care of by its last owner with what seems to be
a new face plate and new airflow accessories such as the check valve behind the exhaust valve on the right side. The neck
ring has its round rubber sealing gasket and also what looks like a new neck dam in its original factory packaging. The system uses a free air flow or excess pressure to provide a constant
positive pressure gradiant which offers protection in hazardous and contaminated environments . DESCO says
it is a rugged simple design which can be disassembled and
reassembled using only a screwdriver and wrench. The diver can put it on or remove it without assistance from the tender.
Serial
number 316 was sold to South Shore Marine on May 11, 1973. These hat’s have a 1/4 inch high serial number on the right side
of the three hole flange. The pictures were taken without the neck ring installed.

Back of helmet CONDITION:  We
have not pressure tested the helmet or valves, but our inspection indicates that beyond the signs of years of use, the helmet
and the neck dam look to be in very good condition. The face
plate and airflow accessories such as the check valve behind the exhaust valve on the right side appear to be new replacements.
The neck ring has its round rubber sealing gasket and also the neck dam is in its original factory packaging. The air
train, a tube inside the hat, is missing.  No speaker is fitted. The inside sponge rubber neck ring shows wear,
but should be usable. The helmet liner is well worn. Like all used diving gear,
this is being sold for DISPLAY ONLY. It should not be dived without having passed inspection by a certified dive shop
Left side showing the secondary exhaust valve and two unused communication plugs
PROVENANCE: From the estate of a hardscrabble character and second generation
hard hat diver, and the son of a member of the salvage team of the 17 month project to refloat the French ocean liner
Normandie on the Hudson River that completed in 1947. Not only did the deceased have an incredible hard helmet and diving
equipment collection, he also, in his lifetime, managed to assemble an amazing collection of anything related to diving. We
believe that this was one  of his personal helmets in its last dived condition.<The rightside of the helmet showing
the check valve,air supply and gate type exhaust valve
THE DESCO STORY:

DESCO was first organized in
1937 in Wisconsin under the name Diving Equipment and Salvage Co.  Its founders included a professional
deep water diver, a Hollywood producer specializing in underwater photography and a medical doctor who was a research scientist
at Marquette University. This team successfully worked together in developing a deep water diving suit combined with
a helium oxygen breathing mixture which resulted in DESCO divers setting two successive deep water records of 420 and 550
feet.  World War II brought
large Navy contracts for diving equipment to DESCO. They included not only conventional  hard-hat gear for the navy,
but also the design, development and manufacture of an oxygen rebreather, known as the “B Lung. By V-J Day, DESCO was
producing more diving equipment than any other company in the world. In 1946 the company
as sold to another group of Milwaukee businessmen and changed its name to Diving Equipment and Supply Co., Inc.
After the Korean War, which again brought an increase in U.S. Navy contracts and orders, the ownership changed hands several
times and has since concentrated on the design and manufacture of commercial and U.S. Navy diving equipment. In 1968 it moved to
its present address at 240 North Milwaukee Street in Milwaukee. Today, DESCO continues providing quality diving
equipment. For the past twenty years, it has been under the leadership
of Ric Kholner who has done a fine job in building on the company’s diving heritage.

Inside of the helmet showing
the condition of the liner and interior neck ring. The neck ring and neck
dam