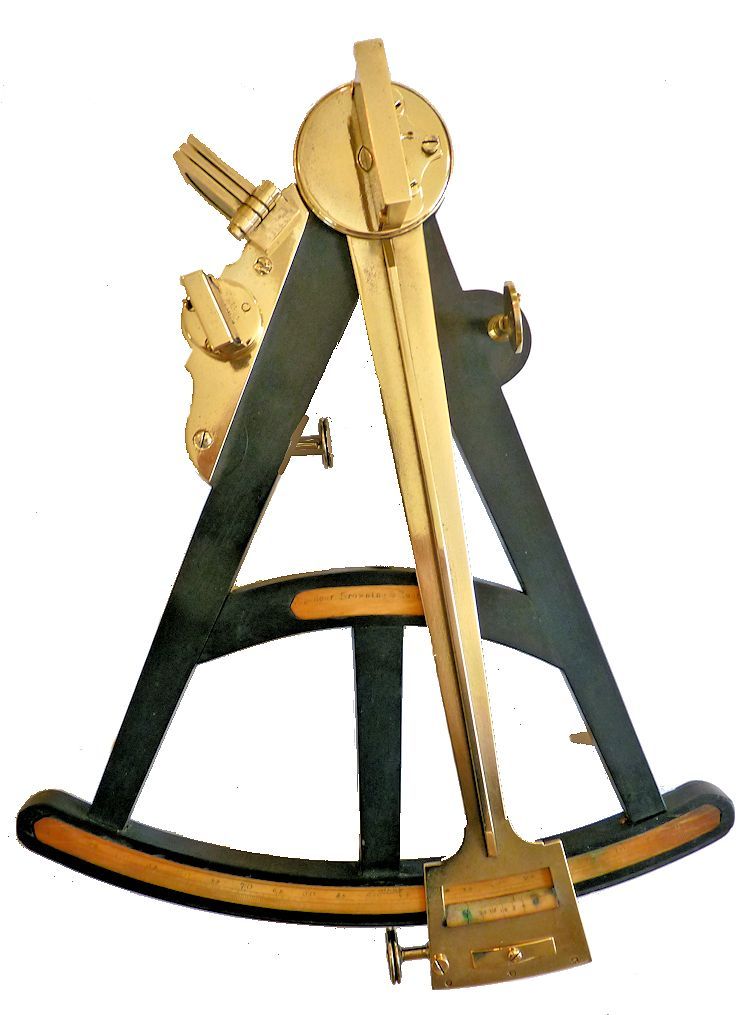 Presented is an ebony frame, ivory arc, antique sextant made by the well known
British maker Spencer, Browning & Rust. of London, who was in business until 1840.The instrument is in
very good condition having all its hardware and missing only the small ivory plate on the back which was for notations, and the
small ivory pencil that was housed in the cross member of the frame. The  ivory of the name plate and the numeric
scale of the arc have darkened over time with a light brown hue. There is a number, painted in white ink on the back of the frame, i.e. 89.00.1803. This is the mark of a museum and signifies when it was acquired or deacessed. It adds appreciably to its value. The instrument was recently polished and lacquered to put it in elegant condition.The arc measures from – 5 to plus 105 degrees. The ivory plate on a cross bar between the two limbs is engraved “Spencer Browning & Rust. London”.  Additionally, in the center of the ivory degree’s scale between 50 and 55 degrees is inscribed in script “SBR” identifying the ivory was engraved by Spencer, Browning & Rust, of London.

The label
on the right inside cover is from the well known instrument seller, C.R. Sherman of New Bedford, MA. It is
in excellent original condition. Sherman worked for
John Kehew, 1849-59 in New Bedford, MA; and succeeded him in 1865,  which means this instrument had considerable use
before it was serviced or resold by Sherman. 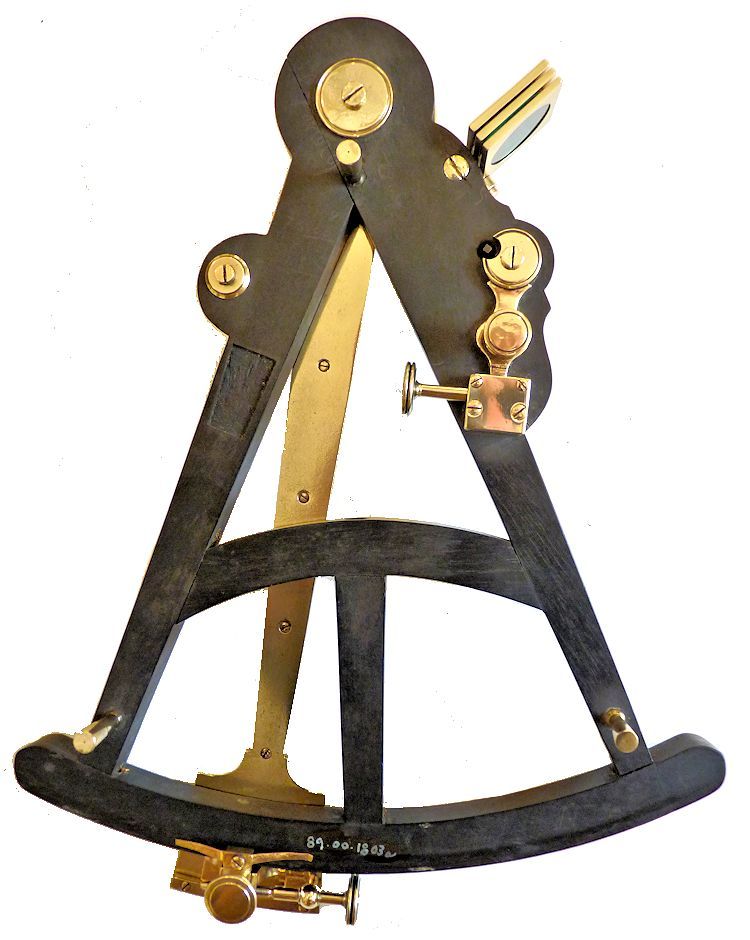 SPENCER was in business in London from 1784 to 1840, specializing
in instruments for navigational use. It’s business continued under the name of Spencer, Browning & Co. which ceased
business in 1870. Spencer Browning & Rust had an early dividing machine and inscribed arcs for others.NOTE:
The white number in the picture of the back of the sextant above is from a museum and
is an accession number from when they acquired it. Or a deaccession number from when they sold it.This
beautifully made instrument has a ribbed brass index arm and measures 12 inches long on the
index arm. The horizon mirror is on an adjustable turntable and can be rotated by an arbor. Note the thumb screw, ivory
vernier scale, reading from right to left from 0 to 20 arc minutes, a peep sight , and a single set of
sun shades which help date the instrument. There is no provision for a handle on this sextant which marks it as
a transitional piece between an octant and a sextant. Some time after 1780, the addition of a tangent screw, as fitted to this instrument, allowed for fine adjustment and represents one of the two major changes in the basic operation of the octants and sextants for the next 150 years! The second was the fitting of telescopes which is lacking here. This sextant was not fitted with a handle which indicates it is
one of the earliest of that type made by Spencer Browning & Rust. 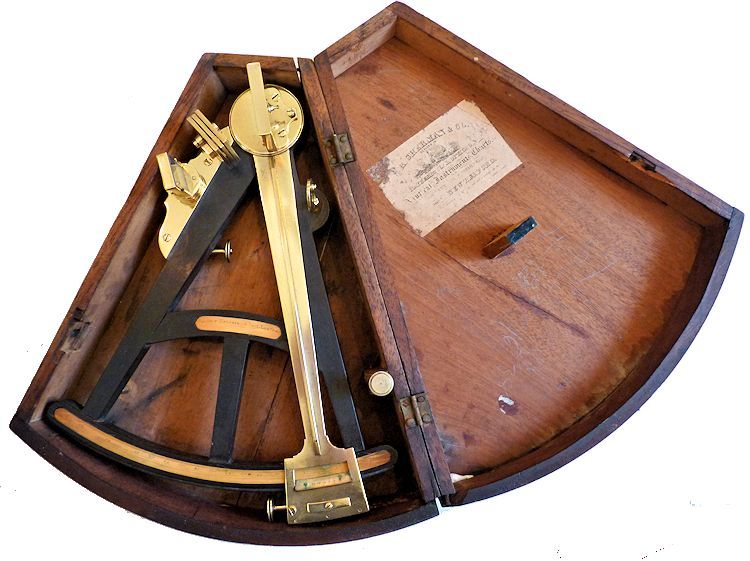 The Spencer Browning & Rust sextant shown in its open case

This is a highly desirable and worthwhile example from one of the best known
English instrument makers.

THE CASE:
The Mahogany “Keystone” case is in good condition and has been refinished. It has a hole in the bottom from the
sextant’s center leg, and has a replaced corner on the top right. There are cracks on the bottom and some warping. There
is a lock recess, but no lock and no key. A label from C. R. Sherman on the inside is in excellent condition. Maker’s name on the cross bar. 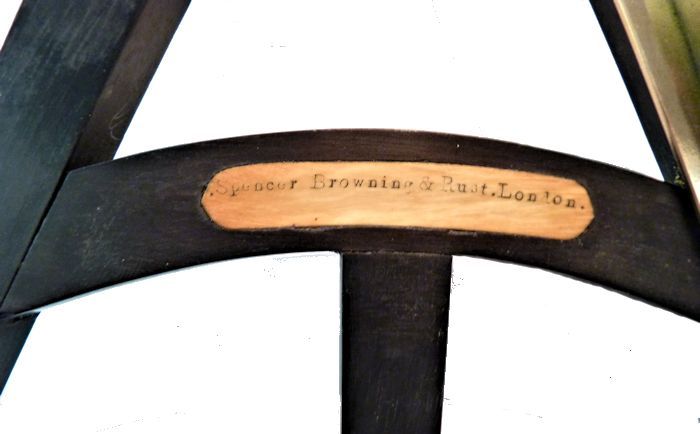 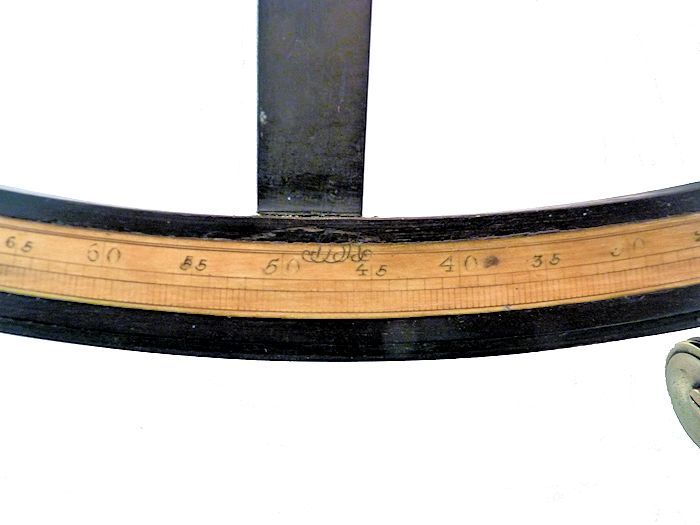 INSTRUMENT CONDITION:
The sextant has been recently polished and lacquered which makes it suitable as a gift. The mirrors are in much
better condition than might be expected though they do show some The horizon mirror has a grey area in the upper right corner. The ivory is has taken
on an unusual brown color, but the engraving is distinct.  Missing is a small ivory plate on the back, and a lead
pencil cap. The index arm clamp is complete. The shade glasses are complete and in good working order. The ebony
frame shows as near new. The instrument has its original machinery, with a two hole peep sight Everything is original
and in good working order. 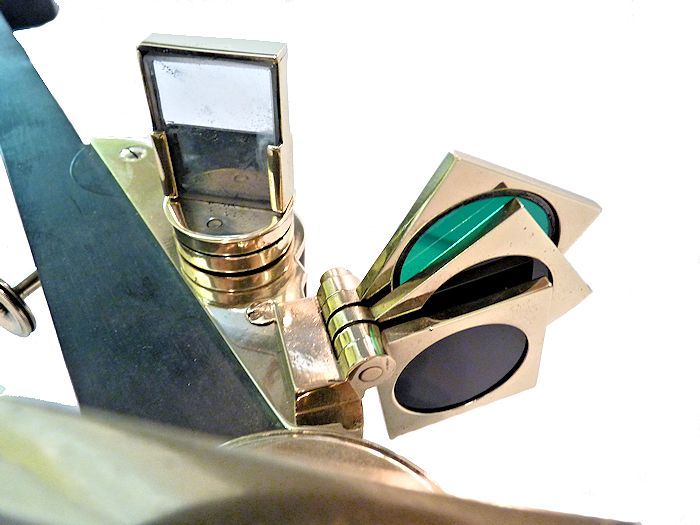 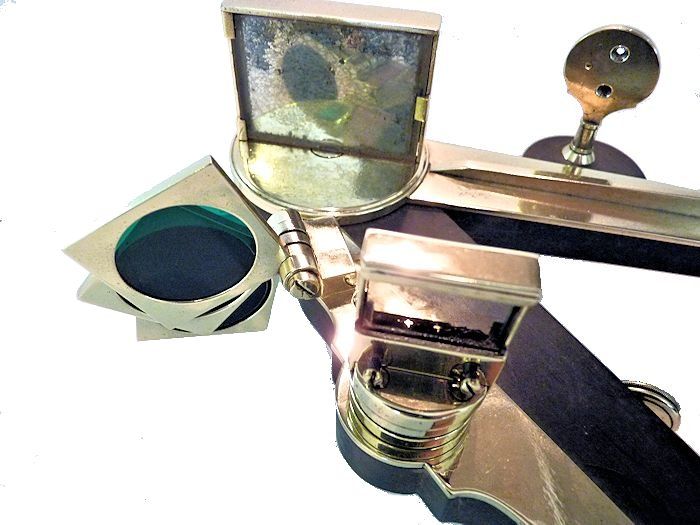 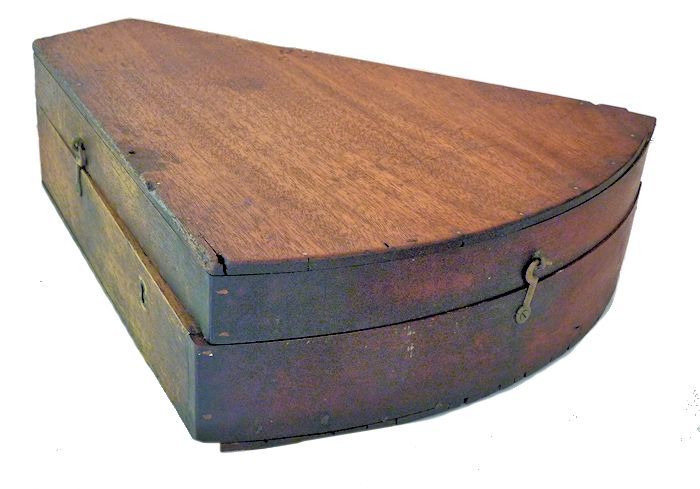 This is a special relic and a great find for that important
person who will appreciate the finest.