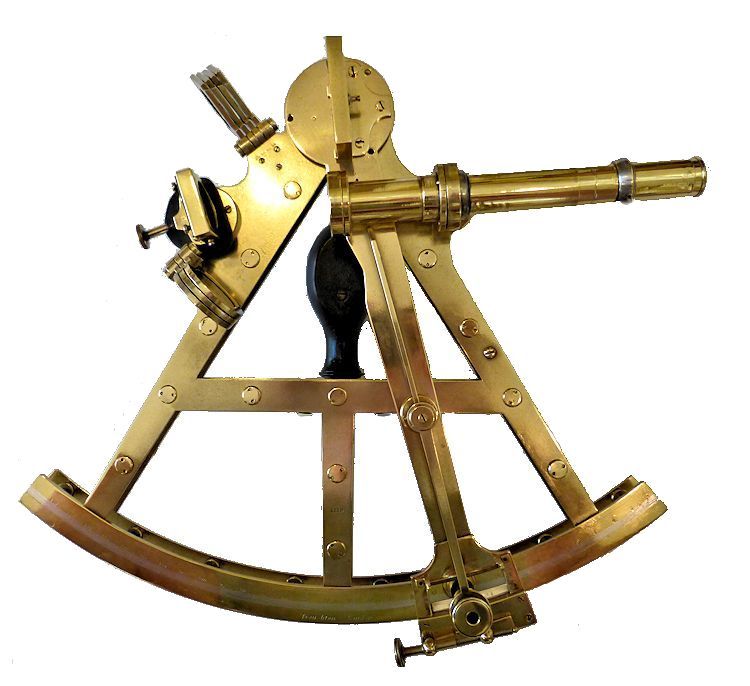 TROUGHTON & SIMMS were the
best of the English instrument makers. This instrument dates from before their partnership. It belongs in a collection
of fine nautical antiques or as an important gift

Presented is the largest double frame sextant that we’ve ever seen in reference works, museums or any place. And to make it even more special, it was made by Edward Troughton when he was in business as a sole proprietor or perhaps when he and his brother John worked
together. The frame is engraved Troughton – London, and carries serial number 1110. It is much larger than normal size for
an instrument of this design which suggests it was one of the first double framed sextants made by Edward who invented this
design. Based on the work of Alan N. Stimson of the National Maritime Museum at Greenwich, England in 1976, we date it to Ca 1816.  Furthermore, it is the only double frame instrument of this large size that we know to
exist regardless of the maker. It measures approximately one inch more in all dimensions except for the size of
the mirrors which makes it 22 percent larger in area. The arc subtends
an angle of 145 degrees which classifies it as a quintant. Since brass is much stronger and more rigid than wood, it became
the material of choice for sighting instruments.  Double frame sextants were expensive to make and never
gained the popularity of the more common single, cast-framed instruments. Consequently they infrequently come to market. For
example, this is the fourth double frame instrument that we have offered in twelve years. For the last most recent see
This is a
smaller version that we sold in 2014 which was made by the Troughton & Simms partnership. This
is an instrument that is so rare and special that it can be considered a remarkable vestige
of the last quarter of the 18th Century. 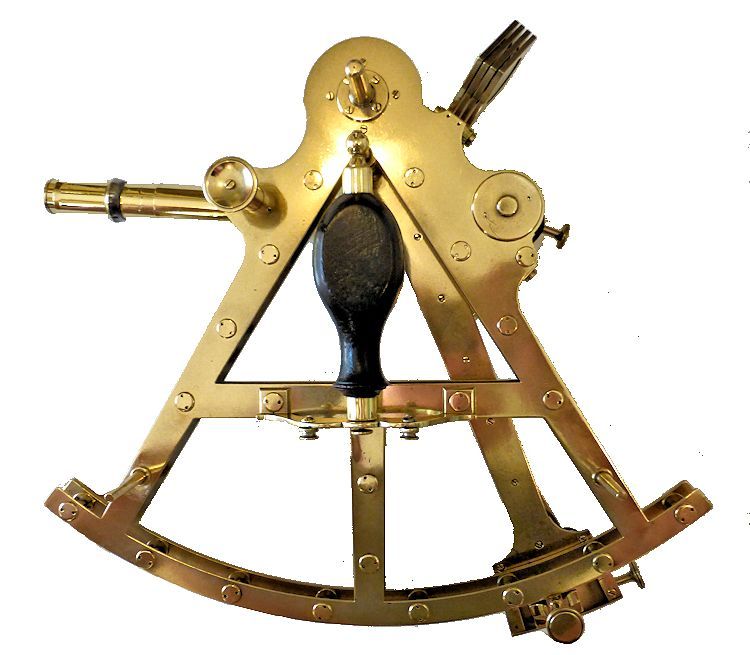 The sextant has a
polished brass straight-bar pattern pillar frame, mounted with twenty one pillars over a second frame with various
fittings and mounts, and a wooden handle. The tangent screw and clamping screw are positioned on the back of the index arm.
The device has four index shades, and three horizon shades. The telescope is attached to a perpendicular rising-piece
which is adjusted in and out by a milled knob. There is also a magnifier traveling over the vernier. The single telescope
presents an inverted image. The polished brass limb is inlaid with a sterling scale from -5° to 145° divided each 5 degrees.
The sterling vernier measures from right to left from 0 to 10 in arc seconds. Edward Troughton patented
the pillar and plate frame sighting instrument in 1788. This is a one time opportunity to acquire an extremely rare and very large example of a double
frame, pillar,  instrument from Troughton, the inventor of the design and without a doubt, one of England’s
most distinguished instrument makers!

Maker’s mark, Troughton – London with serial number, 1110, on vertical brace above INSTRUMENT
CONDITION:The telescope displays the image up-side down which was not unusual for astronomical use. Both mirrors,
considering their age, are in very good condition with the index mirror having some corrosion limited to its outside
vertical edge. The swing arm magnifier is complete and in good working order. Both sets of shades,
i.e., filters are without imperfections. When looking
at the instrument from the rear, the left leg has been repaired using a high tech adhesive.The endless tangent screw is hard to turn due to having a lacquer coating
on the threads.
The split image elliptical horizon mirror in remarkably good condition

HISTORIC BACKGROUND:  Edward Troughton, FRS (October 1753 –
12 June 1835) was a British instrument maker who was notable for making telescopes and other astronomical instruments.
Troughton was born at Corney, Cumberland. In 1779, after serving
an apprenticeship with his elder brother John, he became his partner and soon established himself as the top maker of navigational,
surveying and astronomical instruments in Brittan. In 1795 he delivered the Troughton Equatorial Telescope
to the Armagh Observatory, a 2 inch aperture refractor telescope mounted equatorially, and its first major instrument since
its founding in 1790 (It survived into the 21st century also). [2] He created the Groombridge Transit Circle in 1806, which
Stephen Groombridge used to compile his star cataloger.[3] He did not merely build instruments, but designed and invented
new ones such as his double frame instrument of 1788. Troughton was awarded the Copley Medal of the Royal
Society in 1809. He was elected a Fellow of the Royal Society in March 1810. In
1826, after John’s death and in failing health himself, he took on William Simms as a partner and the firm became known
as Troughton & Simms. Troughton was color blind. On his death in 1835, he was buried in Kensal Green Cemetery. TROUGHTON & SIMMS,
THE SUCCESSOR: Troughton & Simms was a British
instrument-making firm, formed when Edward Troughton in his old age took on William Simms as a partner in 1826. It became a limited company in 1915, and in 1922, it merged with T. Cooke & Sons to form Cooke, Troughton & Simms. The firm produced
hundreds of astronomical instruments such as mural circles, transit circles, sextants, and other astronomical instruments
for observatories around the world. Previously, Troughton had
been a sole proprietor, and before that he was in partnership with his brother John. John died and Edward took on Simms in
1826. Edward Troughton died in 1835.   In 1924 the
company became a wholly owned subsidiary of Vickers; it continued in the instrument business until 1988.  Refs. This maker
is is listed in Sextants at Greenwich”, “Sextants at Greenwich” by W.E.J. Mozer Bruyns, which
catalogs the collection of the British National Maritime Museum at Greenwich, England. And in: The Influence of the Royal Observatory at Greenwich upon the
Design of 17th and 18th Century Angle-measuring Instruments at Sea”, 20 Vistas in Astronomy, 123-130 (1976), Alan N.
Stimson of the National Maritime Museum at Greenwich, England.
The tangent screw with the vernier above reading from right to left in arc seconds