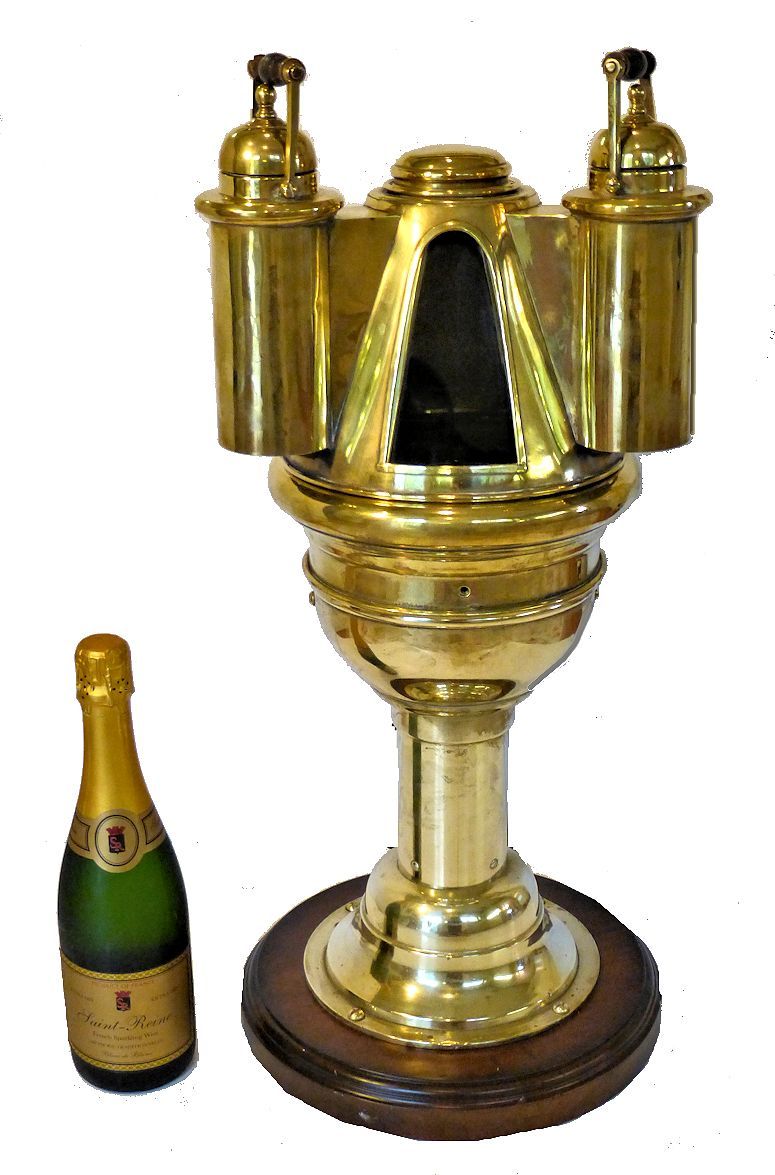 MADE TO THE
HIGHEST QUALITY and
LIKELY ONE-OF-A-KIND!

This is the only John
Bliss skylight style yacht binnacle we have ever seen or heard of. It is in exceptional condition and
with a distinguished American pedigree.

Presented is a Mid 19th Century twin burner skylight binnacle compass housed
in a heavy duty and elegant cathedral style case with a brass protective hood over. The hood has a viewing port in the
front and an access door of the same shape in the rear. Both burners are electrified, but their original housings
have been preserved. The bezel of the compass is stamped with the maker’s name and the serial number 2177. The compass
card is imprinted, John Bliss & Co., New York. The company’s name was changed to this form in October, 1857.

The binnacle
is a classic, but rarely seen skylight design in this period. It was popular in the Royal Navy, but did not become popular
in the US until the 1930’s. And then only on the more important yachts because of the extra expense in making
the multi-paneled hood. This one, because of its unusually small size and high quality, was made for a
sailboat or wood tender to an important large yacht. 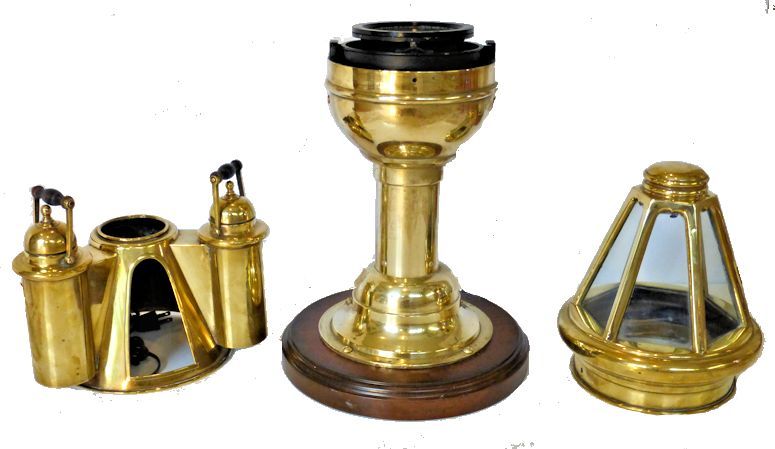 The four major components of the Bliss Skylight binnacle THE SKYLIGHT TOWER has a brass hood which easily lifts
off for daylight use. The front viewing port is uncovered. The one in the back has a hinged door. Each of the candle
light holders has a 15 watt, 120
volt bulb installed and is fitted with a folding brass handle with wood grip. The base rests
on a contemporary circular hardwood mounting block. This is an important example of an early skylight binnacle that is of the highest quality,
and from a famous American instrument maker. 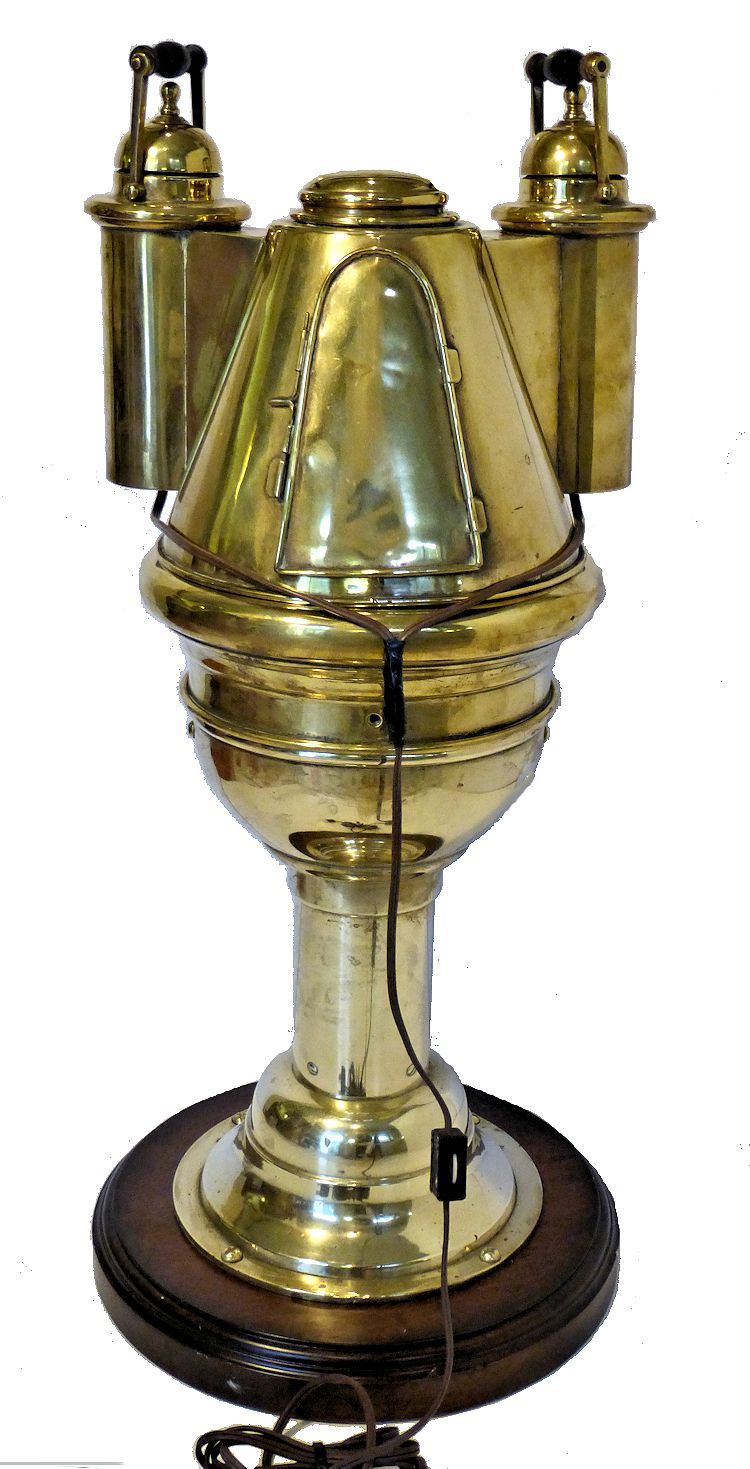 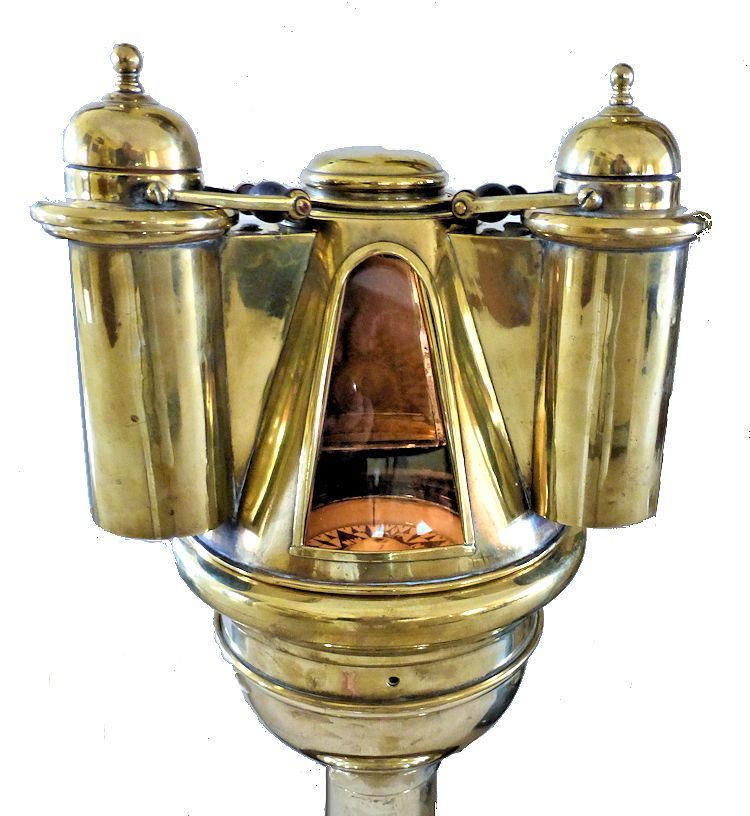 Back of the Bliss skylight binnacle shown over the compass with lighting
THE COMPASS: Is housed
in a heavy brass bowl which is only partially filled with liquid.  It features a very old style card with directions
marked in points of the compass where one point equals 1/4 degrees. A fancy Fleur dis Lis marks North with cardinal and
sub cardinal directions labeled N, S, E, W, NE, SE, SW, NW. Cards with degrees weren’t introduced until the Turn
of the 20th Century which is approximately 50 years after this binnacle was made.
The compass is viewed though the 5
x 3 1/4″ elliptical port with a rolled metal rim. Twin lamp burner towers with caps are on each side of
the “helmet”. COMPASS SIZE: Diameter of bowl 5 1/4″
Diameter of card 4″ 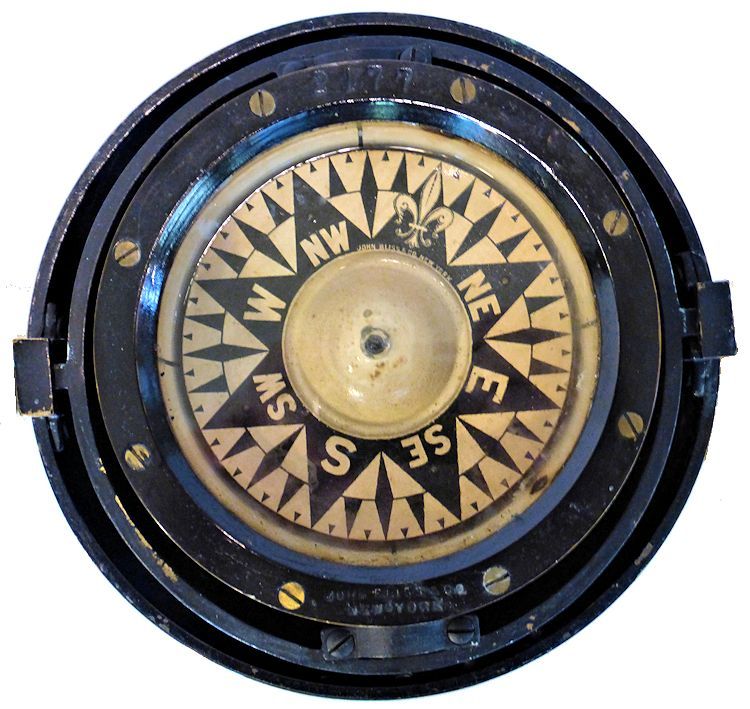 Compass card in points of 11 1/4 degrees. Bezel with maker and serial number 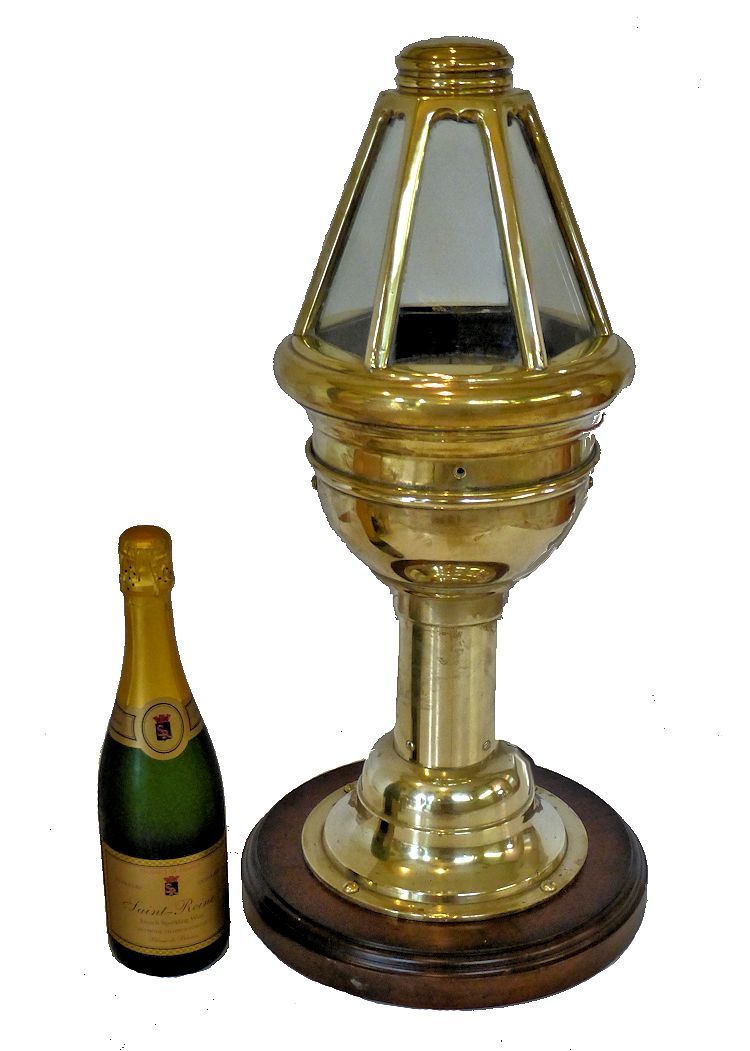 The Bliss skylight binnacle with the hood removed

HISTORYJOHN BLISS & Co.:John Bliss, Sr. was
born in Norwich, CT in 1795, and died in Brooklyn, NY on October 15, 1857. He apprenticed to his uncle, Benjamin Lord in Rutland,
VT as a silversmith and clock maker, and later moved to New York City as a jeweler around 1830. In 1834, he went into partnership with Fredrick Creighton, an English watchmaker at 42
Fulton St. for the making of chronometers under the name, Bliss & Creighton. They were one of the few in this country
who made chronometers from scratch and also patented a new escapement which reduced chronometer error. However, the partnership
did not last, and they went their separate ways in 1853. John Bliss then joined with his son John, Jr., establishing the firm John Bliss &
Son in 1855. When John Bliss, Sr. died in 1857, and the name of the company was changed to John Bliss & Co., which endured
for 100 years. The Bliss firm was a noted purveyor and repair shop for nautical instruments of all
kinds. On August 4, 1871, Bliss purchased the famous E. & G.W. Blunt & Co. whose operations as a seller of nautical
instruments dates from 1821 in New York.  Blunt was also noted for publishing a Nautical Almanac staring in
1850. The company also continued their own made chronometer business. They were at various locations in lower
Manhattan and ended up at 84 Pearl St. from 1929 to 1956, when that building was sold and they were forced to go out of business.
The famous Schooner yacht Intrepid, owned by Lloyd Phoenix, Vice Commodore of the New York Yacht Club
in 1903, was fitted with a John Bliss compass.