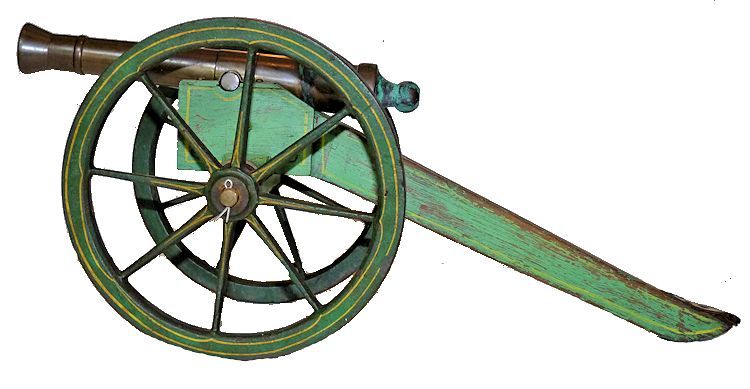 The signal cannon shown above is a miniature example similar
to the M1841, 6 Pound field gun that was used through the Civil War and beyond.The rare paint scheme
and workmanship makes it it an exceptional buy.

Presented
is a bronze barreled cannon mounted on a field type carriage which, except for its unusual fluted muzzle, looks very
similar to a M 1841, 6 pounder that was used through the Civil War and beyond.  The carriage and iron wheels are
painted in a light green tempera paint that is an old style color. It makes a very attractive display. There
is significant paint loss on the top of the carriage’s trail. Both the carriage and the iron wheels are outlined
in yellow.
Miniature cannons like this were made for actual use or by the foundry as an example of its work.  Or
they were used to train cannoneers in their job. There are no foundry markings on this example which is not unusual.
The well used touch hole can be seen at the far left. Its size is enlarged due to repeated firings.

The bronze barrel
has an unusual trumpet shaped mouth and has a dark brown patina that only comes with age. The patina ranges with only minor variations
in shade over the cannon’s length. The original carriage is made from a hard wood and has approximately 70 percent
of it original finish remaining. It is fitted with brass hardware. The bore is free to the touch hole, and shows evidence
of being fired.

The trunnions are located at
the center of the tube and date the design to after 1725.  The introduction of the Cronstedt system
coincided with the trunnions being located at the mid level of the inner chamber. Before this, they had been
placed below the centerline.

PROVENANCE:  The cannon comes from a private collection and
was acquired in the normal course of business. 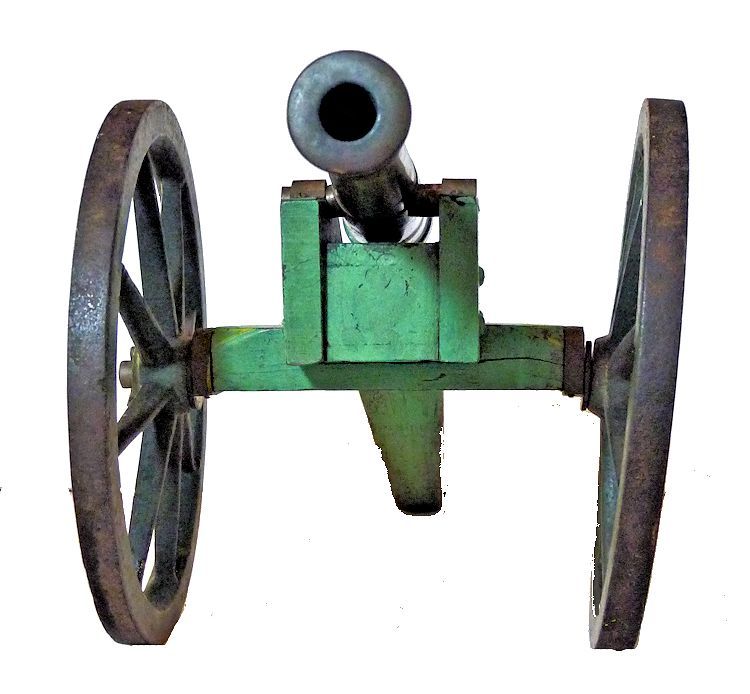 CONDITION:  The light green tempera paint is an
old color that dates back to the 1750’s or earlier. It is water based. Most of the paint loss is on the top of the trail
of the carriage. Both the carriage and the iron wheels are outlined in yellow. One of the axel cotter pins holding the wheel
is a replacement. There is a bright green verdigris on the bronze barrel at the breech and cascabal. There is also
a casting irregularity on the left side of the tube forward of the touch hole which is free to the bore. The undercarriage has a split in the front axel’s wood as seen in the photos.
Except for the paint loss, the wood carriage
is in excellent condition.  There are some minor marks of age as expected. There are no maker’s
marks or inscriptions.This  fine example is being sold for display purposes only. No attempt should be made to fire it
without inspection by a gunsmith.