Sailboats in Moonlight
by Edward Moran 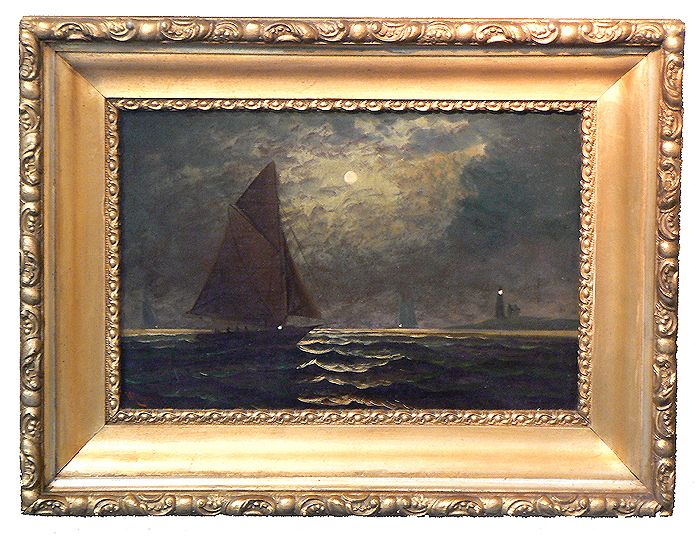 Presented is a classic nocturnal painting of a vessel sailing in moonlight off a peninsula with
a lighthouse and four other sailing ships in the background. The vessel in the foreground may be a large yacht or a gaff headed
sloop rigged smack (a fishing vessel) sailing on the port reach. 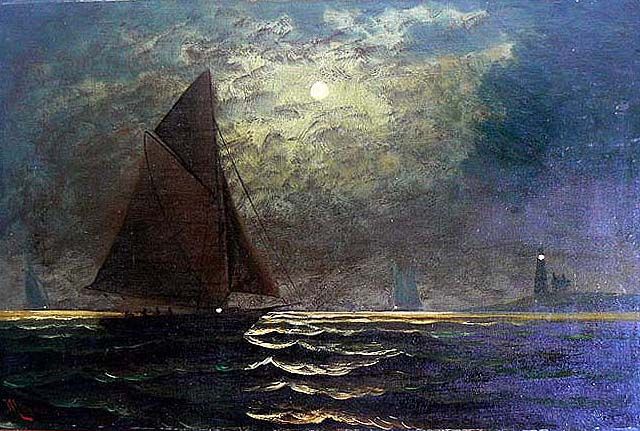 In our opinion, this painting is indicative of Edward Moran’s much later work when his brush
strokes became much broader. He began experimenting with “luminism“ early on. This work has many characteristics
which are personal only to him. It reflects his preference for marine scenes, and also his interest in the properties of light
and atmosphere at varying times of day and night. Edward, like his younger brother Thomas, was interested in the relationships
between color and light. See the section on PROVENANCE below. While
the focus of this painting is the sailing vessel in the foreground, it is the brilliant contrast between light and dark, and
the hazy rendition of the sailing vessels in the background horizon which are seen in many of his works and are his signature.
These background vessels establish this paintings provenance. Edward
strived to capture the variations between light and air as is further illustrated on the horizon where the land mass is absorbed
gently into the sky as are the ships to its left. The soft, muted colors of the moonlit sky feel almost real in this scene
and the reflection of light cast upon the gentle sea reflects Edward’s admiration of the atmosphere. On the lower left,
it is signed Moran with the recognizable stylish tail of the right leg of the “M”, that was particularly his own.
COMPARABLE PAINTING AT CHRISTIES: An excellent example, of his use of filtered light, hazy brush
work, and the portrayal of mood over subject which became a characteristic trait of Moran’s throughout the 1880s is found
in this painting by Christies in September 2006 with an estimate of $30,000.00 to $50,000.00. It is signed and dated 1885.
Note the similarities in the composition, the dark mood of the scene, the lighting and the type of vessel depicted. Since
the painting being sold was done around the same time, we feel it means he was more on his game. 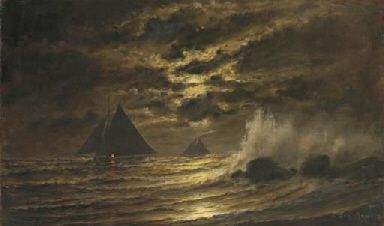 CONDITION OF PAINTING AND FRAME:

The carved wood gilted frame is original and dates to the 1860-1880’s.
It is a heavy and made from wood that was gilded and later over sprayed in gold. The condition of the painting is excellent,
but it has been mounted on Masonite to repair a small tear that can only be seen under black light to the left of the mainsail
leech of the boat in the foreground. Masonite was introduced to the market in 1924, but this piece is stenciled on the back,
“Product of Masonite Research” which indicates it was still in the trial stage, and before being introduced to the
public.

PROVENANCE: Sailboats in Moonlight was purchased at auction
in 2007, put in our warehouse and forgotten until moved to our gallery in 2010 where it can be viewed. The selling New England
auction house gave us no information other than it was found by a “picker” in the South. It has been in our private collections
ever since. THE
MORAN FAMILY OF ARTISTS: The Moran family, was
one of the most prolific families of artists in American history, and was second only to the Peale’s in their prominence
while they were active and in later years when their work gained even greater appreciation. Edward Moran, was the oldest brother
who came to prominence in the 1850’s. He preferred painting seascapes, and was considered the finest marine artist of
his time. Edward’s son, known as Percy (1862-1935) and his second son, Leon, (1864-1941) were also painters of lesser
importance. The leading Moran was Thomas (1837-1926) who specialized in western landscapes gained great fame and his works
regularly fetch six figures. His wife Mary Nemmo (1842-1899) became known for her etchings in her own right. Other brother’s
of Edward and Thomas were Peter, an animal painter, and John, a photographer, of much less importance. 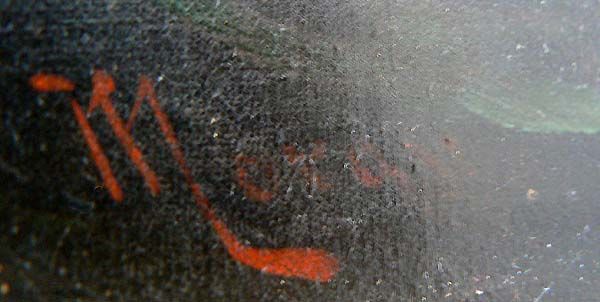