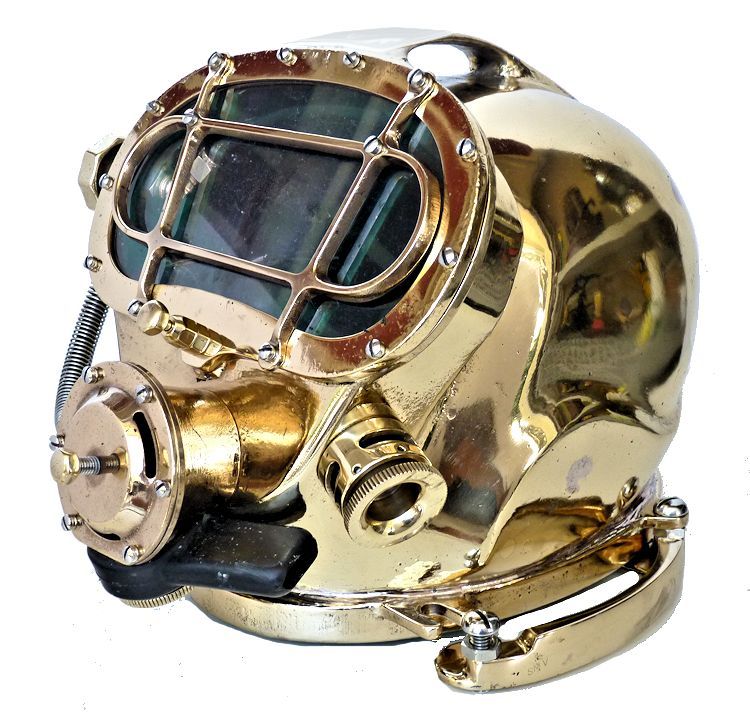 Ben
Miller’s philosophy: “Diving equipment is more than the tools of a man’s trade, it is his home under water,
his environment for hours at a time. It should be designed to get him down and back safely so that all he has to worry about
is his job, not the equipment SPECIFICATIONS: 11″
H x 11″ W 14” D     Serial Number NA    Weight 27 1/2
lbs   Presented
is a very late Model 400 Ben Miller shallow water diving helmet. The design  was conceived and first introduced
in 1967. This is its last iteration. It and the Kirby Morgan fiberglass clam shell helmets of the same years shared numerous
similarities. The design philosophy that set the Miller helmet apart from the Kirby-Morgan was that it used off the shelf
parts that were readily available from any hardware store to make up the helmet. For example, the neck seal is a kitchen pressure cooker seal,
the harness was held in by vacuum cleaner belts, there were no special O-rings. The regulator is just a simple Scuba
diving unit. Ben
Miller died in 2001, and the company has been in a state of Limbo ever since. However, Kirby Morgan, through their network
of dealers, has stepped in and is handling replacement parts and service. Kirby Morgan is also moving forward with manufacturing
a Ben Miller bronze dive helmet which may hit the market as early as next year. For comparison, we’ve been told it will
be priced in the neighborhood of $8800.00 at retail. 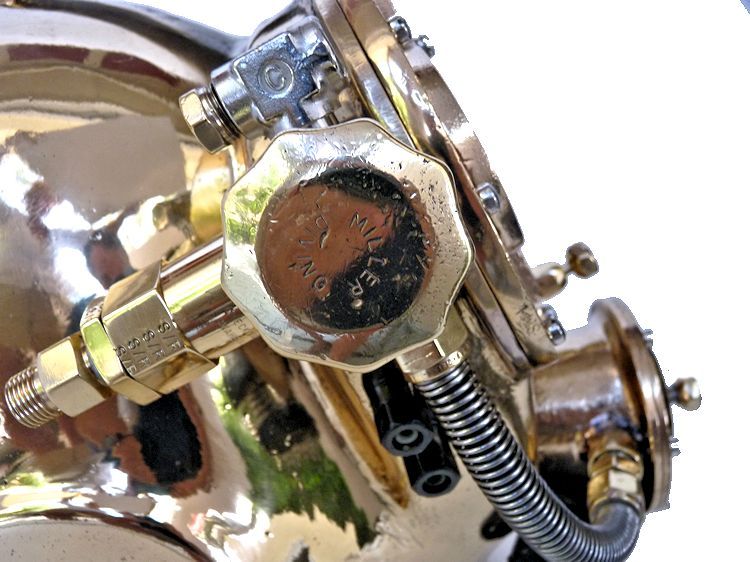 CONDITION:
This helmet is a Locker Find and requires a thorough going over by a certified hard hat dive shop if the intention is to dive
it.  Otherwise, it has recently been polished and lacquered for display.  The name of its past owner is stamped
at the front top of the helmet just behind the lens bezel. We don’t know enough about the Ben Miller helmet to give an
accurate summary of its condition. We believe it needs a neck dam, the upper and lower neck rings, and a new new interior
liner, and the nose piece from the regulator needs to be replaced. The regulator should probably be replaced or at least rebuilt.

Like all used diving gear, this is being sold for DISPLAY ONLY. It should not be

dived without having passed inspection by a certified dive shop.

Benjamin A. Miller was born in Council Bluffs,
Iowa. When he was 9 years old his family moved to Riverside, California where Ben finished his elementary, middle, and highschool education. In high school, Ben bought his first motorcycle. This provided what Ben often called his “apprenticeshipin metal”. His greatest pleasure was to design and chop motorcycles, which remained a lifelong passion. After graduation
from high school, Ben joined the US Army and was stationed in Germany for 2 years. In
1965, Ben returned to the US, where he visited his brother Gene Miller (1933-1999), who was a commercial diver living in Morgan
City, Louisiana. Ben first worked as a tender for his brother, and in 1966 started work as a diver in the offshore industry
for eleven years. In1967, Ben went to work for Ocean Systems Inc. where he used many helmets and masks. From this experience, Ben designedand built his own fiberglass helmet, which set him on the path as a manufacturer. In 1969, the bronze 100 Series helmet was
built, followed in 1970 by the Miller Diving® quick release weight belt buckle. In November 1971, Ben designed the Miller
Diving® harness which remains today as the industry standard worldwide. The Miller Diving® 200 Series and 300 Series
diving helmets followed respectively in 1972 and 1977. The 400 Series diving helmet was the culmination of 30 years
of experience. Ben left Morgan City in 1978 and relocated to Harper, Texas. Thirteen
years later, Ben passed away on April 8, 2001, in Lima, Peru. The cause of death was encefalopatia aguda, a rare genetic
condition, which causes the brain and body systems to suddenly shut down. The company continued operations for some years
making diving helmets, harnesses, and weight belts that were used worldwide throughout the commercial diving industry,
but they have since closed. Based on a biography by John R. Kane / Historical Diving Society USA 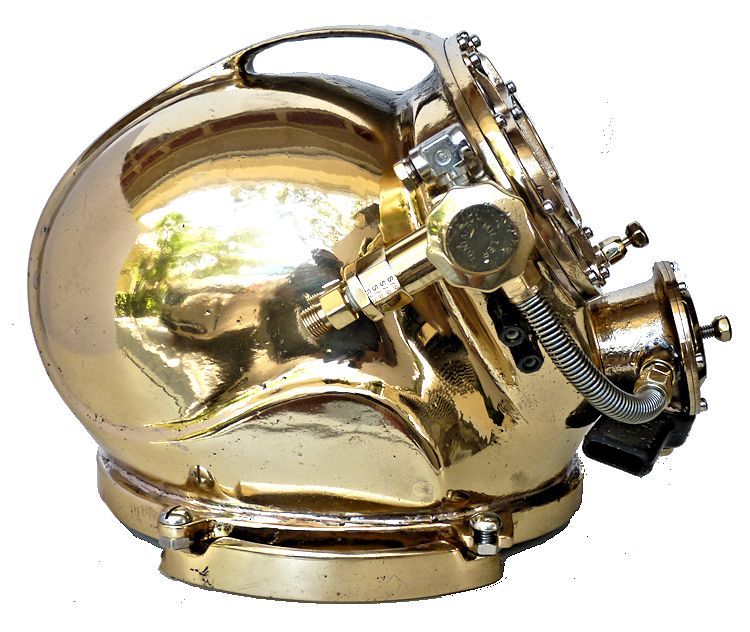 Both sides of  the Miller polished bronze dive helmet

Like all used diving
gear, this is being sold for DISPLAY ONLY. It should not be dived without having passed inspection by a certified dive shop. 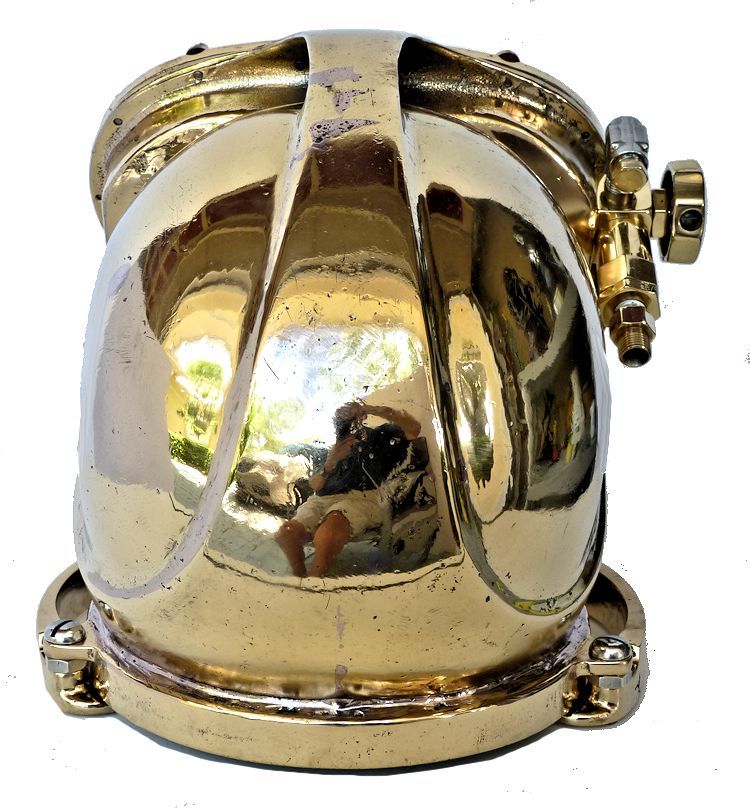 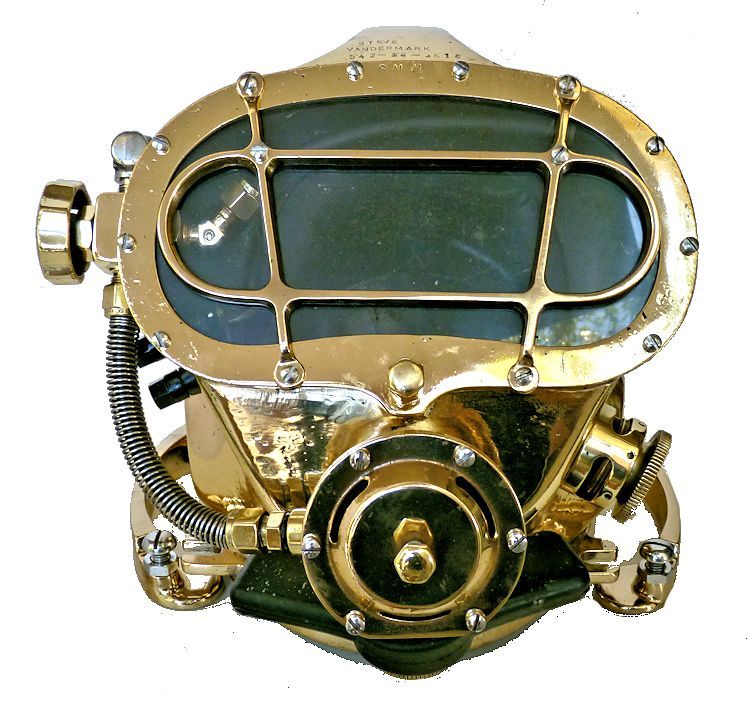 Ben J. Miller was a small, but important figure in the Commercial Diving arena and was known for his simple, rugged,
high quality dive helmets. His death and the subsequent closing of his business was a loss to his customers and supporters. 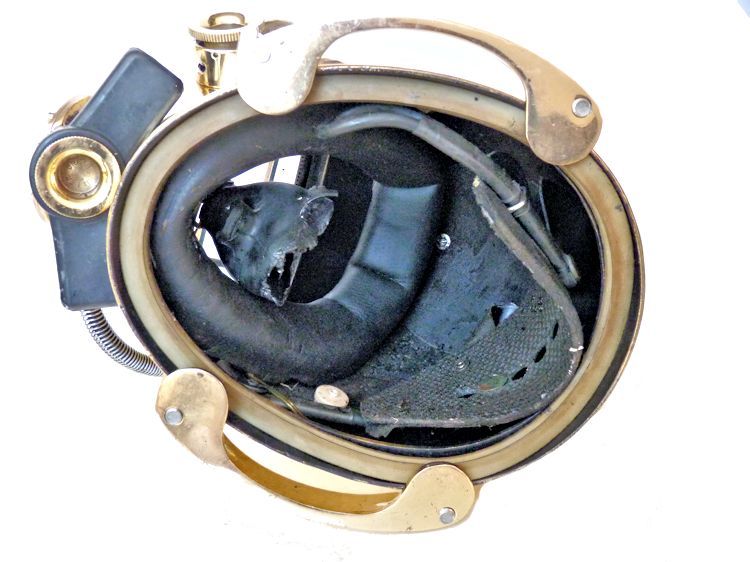 The inside of the Ben Miller dive helmet