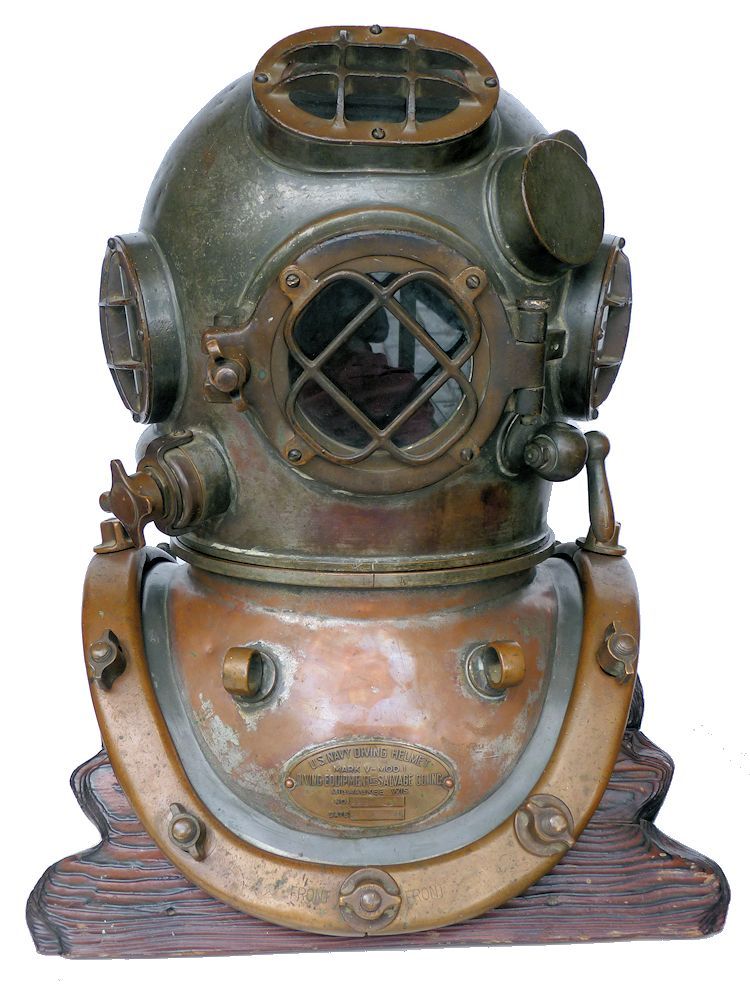 Presented is a U.S. Navy MK V dive helmet that was made by the Diving Equipment & Salvage Co., Inc., later to
be known as DESCO in 1945.  Our records show that after WW II all Navy MK V’s were accumulated in various
Navy Yards and were later destroyed or surveyed out. This helmet  was acquired from Ed Forsythe, a commercial diver who operated out of Portland, Oregon,
in 1989, and spent the next 26 years in a private collection so it is new to the market. HELMET & MARKINGS:
This is an authentic 12 bolt, 4 light Diving Equipment & Salvage Co., Inc.  MK V  helmet
,dated 2-2-1945, with serial number 2224 on the maker’s tag. The
serial number is also stamped on the inside of the bonnet’s and breast plate’s threaded rings.  All the
brails are numbered,  1 through 4 on the reverse. On the obverse they are marked front or back. There is a
Navy inspector’s stamp on the maker’s tag shown in the picture directly below. 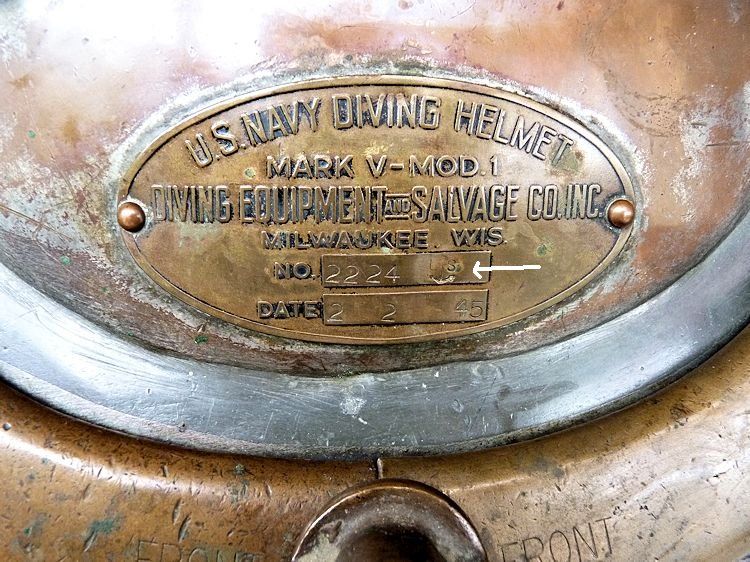 CONDITION: We have not tested this helmet other than to visually inspect it and manipulate all the moveable parts and determine that it
is complete except for a speaker. It shows considerable use and has numerous dents which are almost all on the top. At 70
years of age, it has accumulated a wonderful chocolate brown patina on the breast plate and  a more greenish patina
on the bonnet with areas of the chocolate brown showing. it is in absolutely outstanding condition overall. The air vents
are all intact. The right side chin relief valve, spit cock handle, front door wing nut, all turn. The speaker housing is
empty, but two comm wires are present.

Before use,
it needs to be thoroughly inspected by a certified dive shop. Visually it makes a striking appearance and it is one of the
most beautiful helmets we’ve seen. 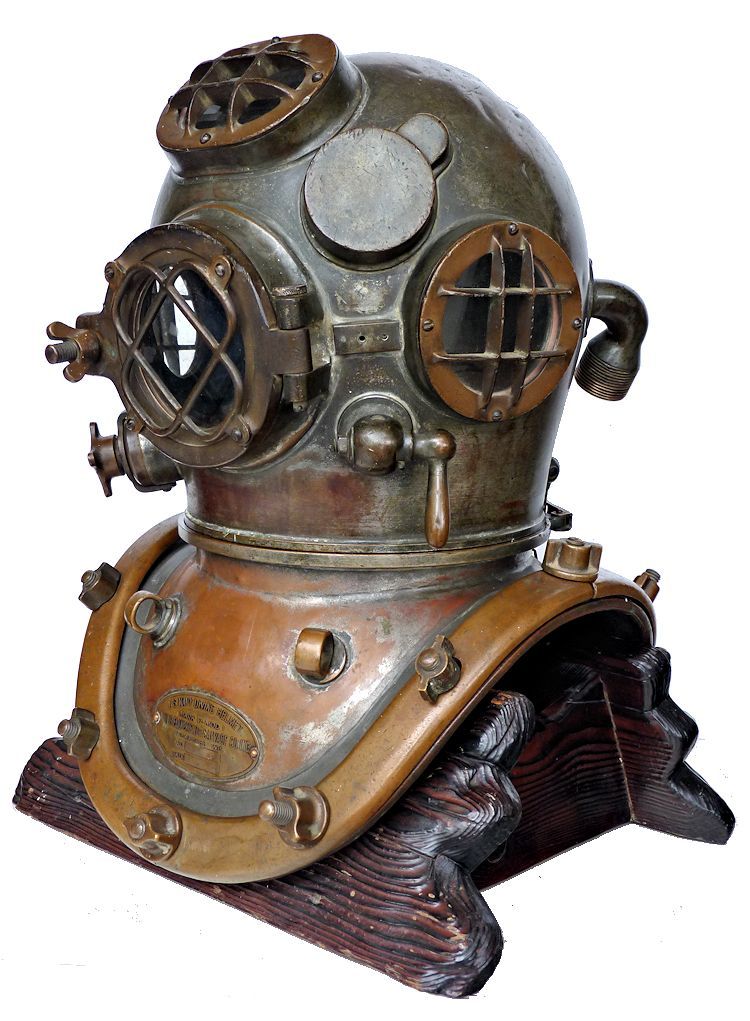 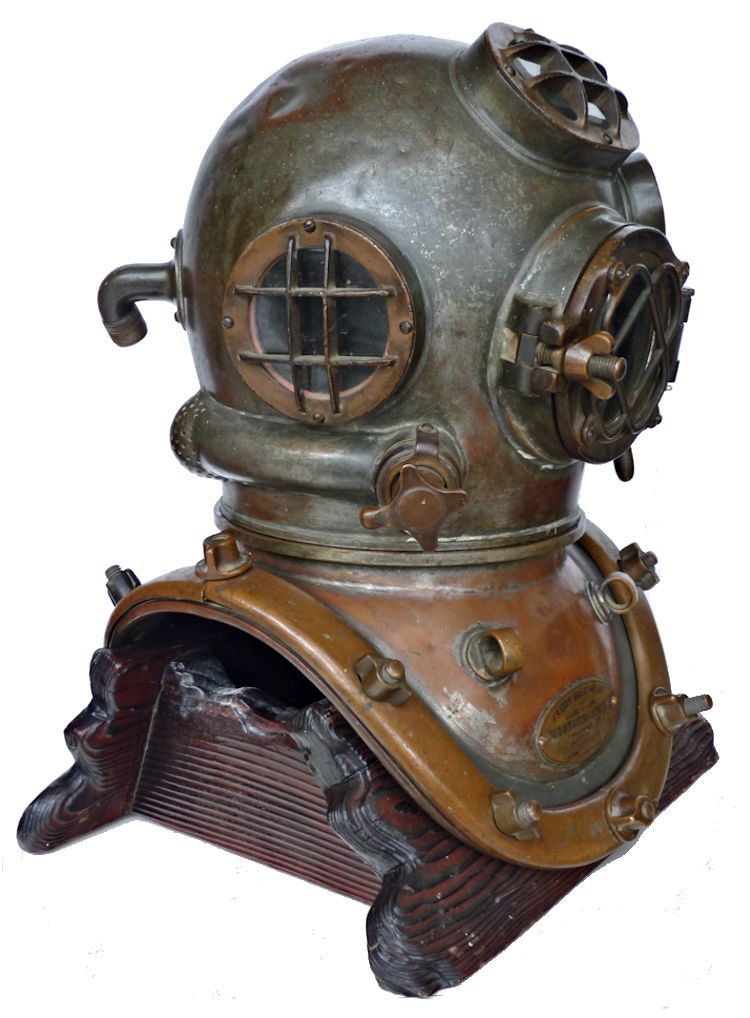 Viewing
the helmet’s front from the right and left oblique

Like
all old diving gear, this is being sold for DISPLAY ONLY. It should not be dived without having passed inspection by
a certified dive shop. 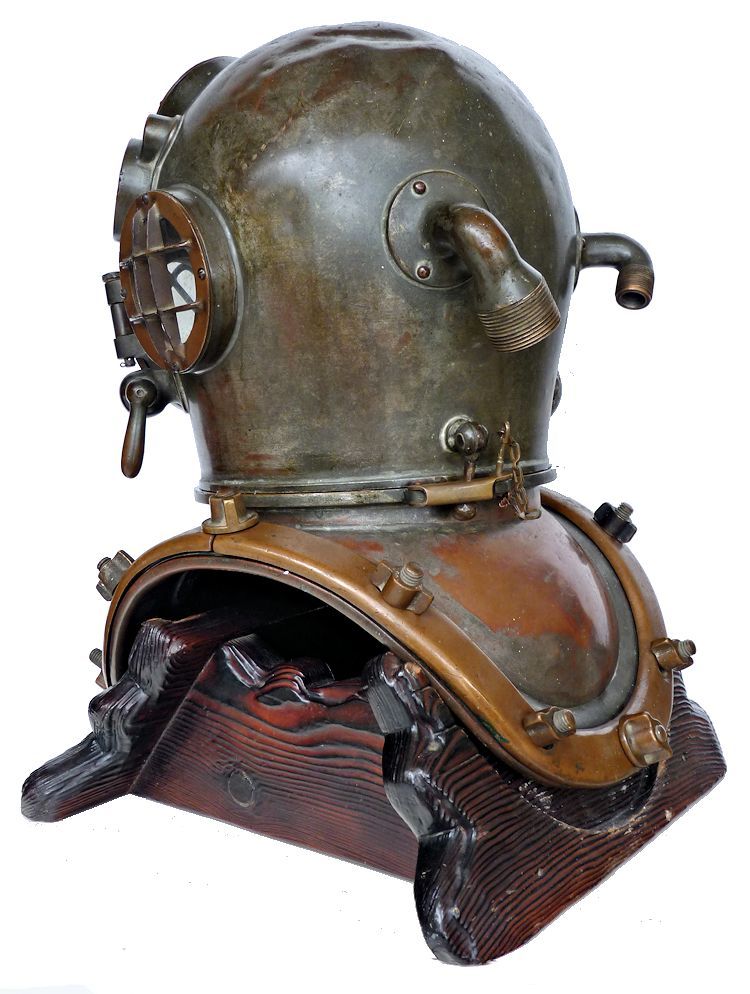 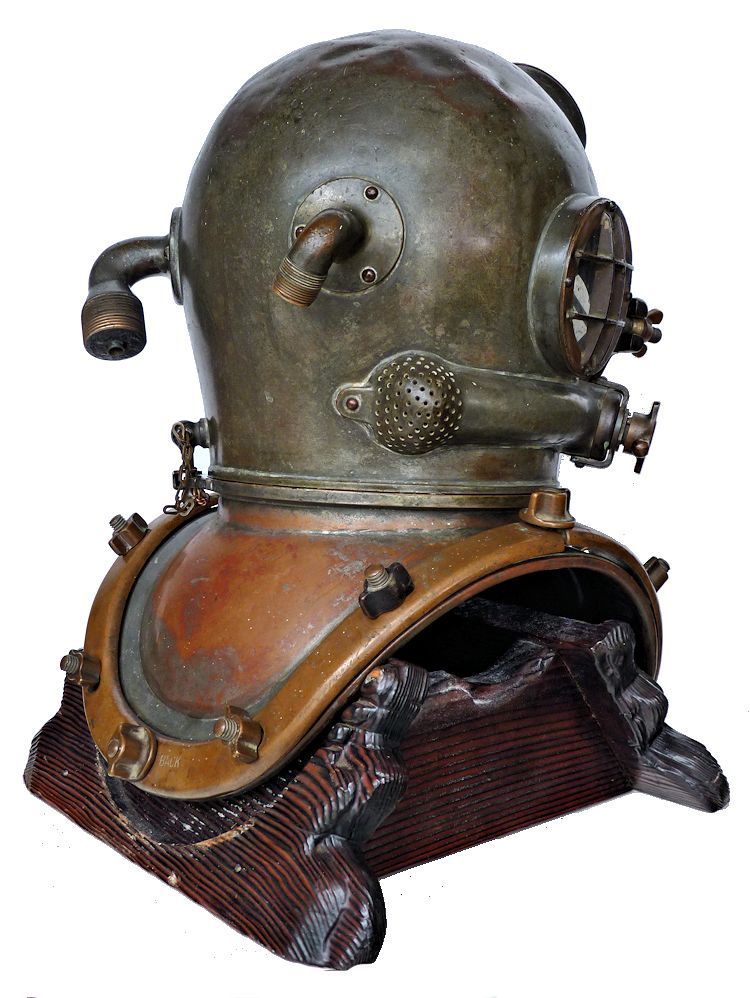 For Certification, the place to go would be the company who made this hat, now known worldwide as 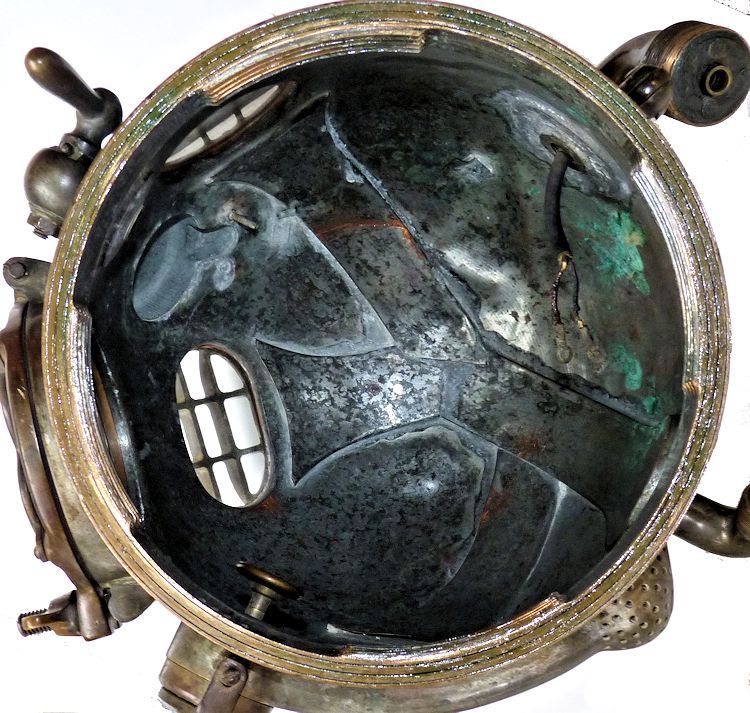 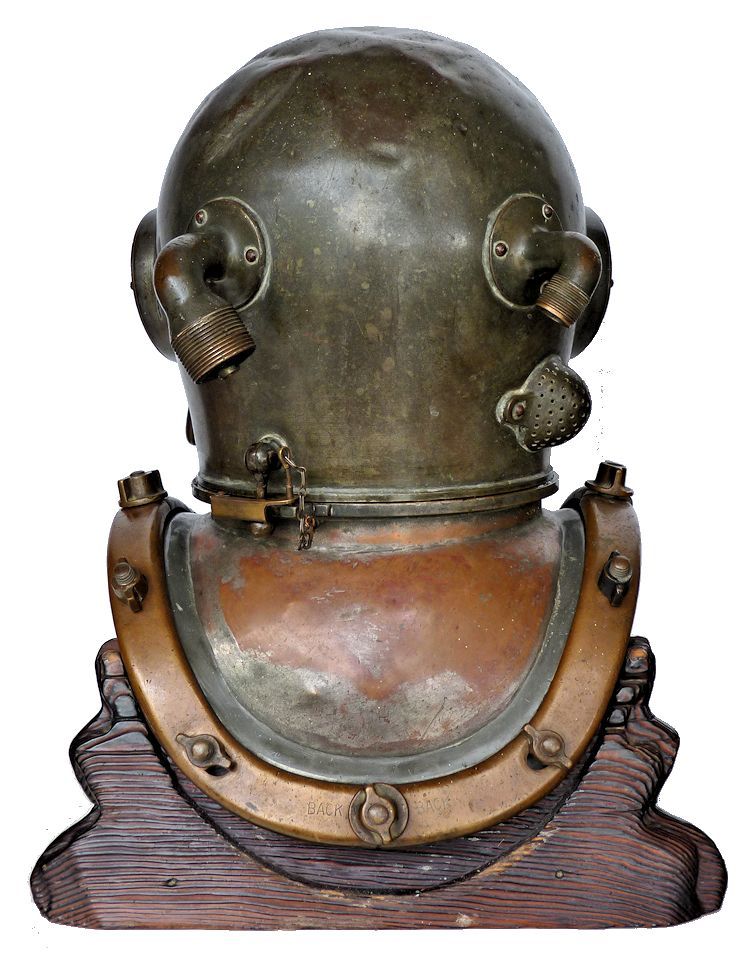 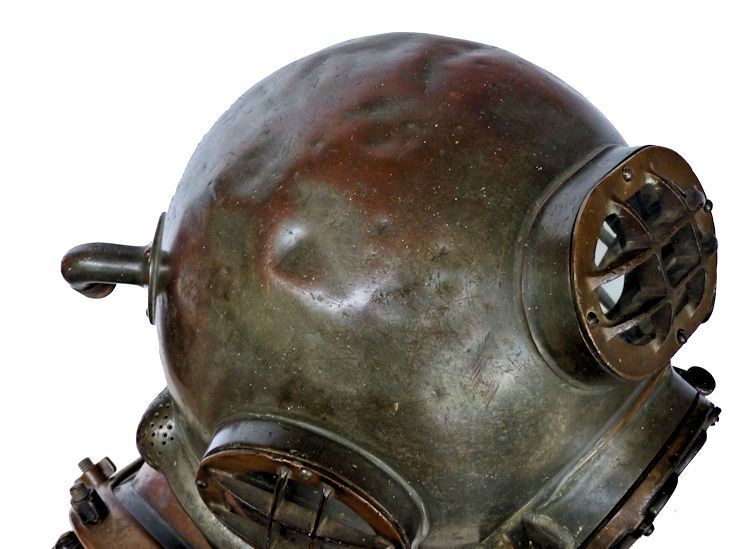 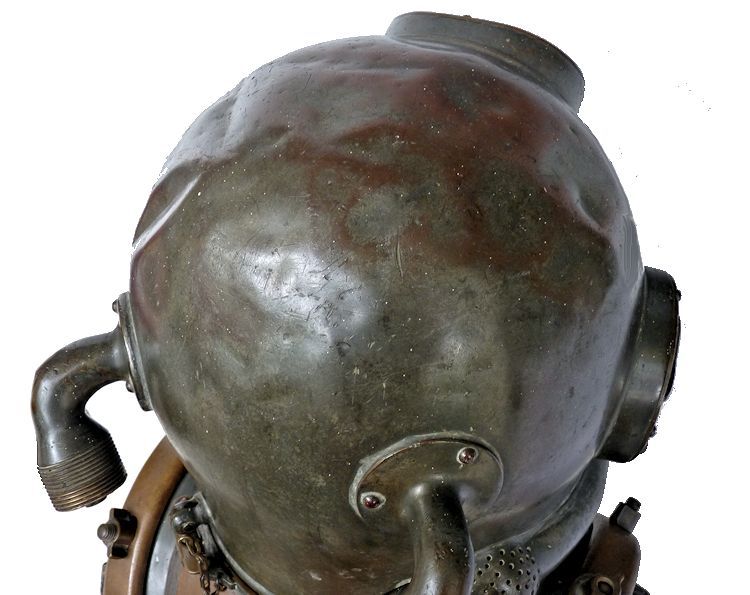 By 1915, the Bureau of Construction and Repair had designed
the MK V Diving Helmet which seemed to address many of the problems encountered in diving. This deep-sea outfit was designed
for extensive, rugged diving work and provided the diver maximum physical protection and some maneuverability. The 1915 MK V Diving Helmet had an elbow inlet with a safety
valve that allowed air to enter the helmet, but not to escape back up the umbilical if the air supply were interrupted. Air
was expelled from the helmet through an exhaust valve on the right side, below the port. The exhaust valve was vented toward
the rear of the helmet to prevent escaping bubbles from interfering with the diver’s field of vision. By 1916, several improvements had been made to the helmet, including
a rudimentary communications system via a telephone cable and a regulating valve operated by an interior push button. The
regulating valve allowed some control of the atmospheric pressure. A supplementary relief valve, known as the spit cock, was
added to the left side of the helmet. A safety catch was also incorporated to keep the helmet attached to the breast plate.
The exhaust valve and the communications system were improved by 1927, and the weight of the helmet was decreased to be more
comfortable for the diver. After 1927, the MK V changed very little. It remained basically
the same helmet used in salvage operations of the USS S-51 and USS S-4 in the mid-1920s. With its associated deep-sea dress
and umbilical, the MK V was used for all submarine rescue and salvage work undertaken in peacetime and practically all salvage
work undertaken during World War II. The MK V Diving Helmet was the standard U.S. Navy diving equipment until succeeded by
the MK 12 Surface-Supplied Diving helmet in February 1980, which in turn was replaced by the MK 21 in December 1993.