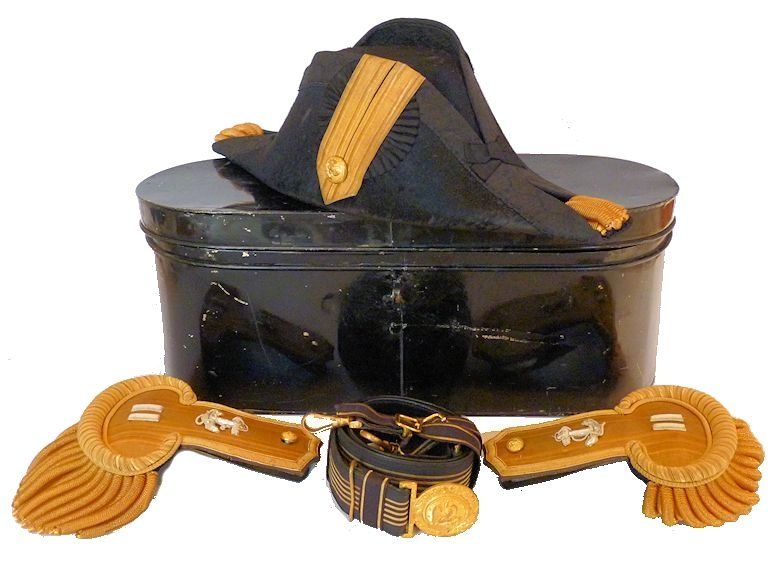 French Gold Bullion! Presented
is a cocked hat, sword belt rig, and epaulets of the highest quality with a pedigree of being French made using only the highest
quality Beaver felt for the hat and gold bullion for the epaulets. The bicorn cover shows wear with most of it on the backside
since the cover was frequently carried by hand and rubbed against the sword belt. The epaulets on the other hand are
like new with only a pleasant patina to show their age. The kit was sold by Schuele, Peppler & Kostens, of
Annapolis, MD, but the epaulets and likely the cover were made in France which accounts for their high quality. Because a cocked hat and epaulets for the Full Dress uniform was
discontinued in 1940, the kit likely dates to the 1920’s or earlier since there is no record of the vendor after 1924,
and this kit bears the higher rank of a lieutenant  When stationed
at the Naval Academy, lieutenants frequently served as the midshipman company officers. All the gear is housed in a European
style tin case that is in very good condition. THE COCKED HAT: was worn by officers with
full dress uniforms commonly refereed to as a “fore and aft” hat or bicorn. During the 1700’s the hat was worn
parallel to the shoulders, but in the 1800’s was modified to be worn with the points to the front and back. Wearing of
the Cocked Hat was discontinued on 12 October 1940 in the U.S. Navy. This hat is Beaver felt bound with gold bullion accouterments. On each end is a blue and gold tassel. The
hat has a ribbed silk band of black embroidery along its upper edge and two bands of wide of gold bullion with a
domed gilt brass button at the bottom. There is a large black ribbon cockade at the center. The interior of the hat features
a brown hat band and white silk liner with the name of the vendor inscribed in the crown. It is marked size 7 1/2
and is  17 3/4″ L x 6 5/8″ W x 5 1/2″ H.  In
the tin case it weighs 6 lbs. 12 oz. 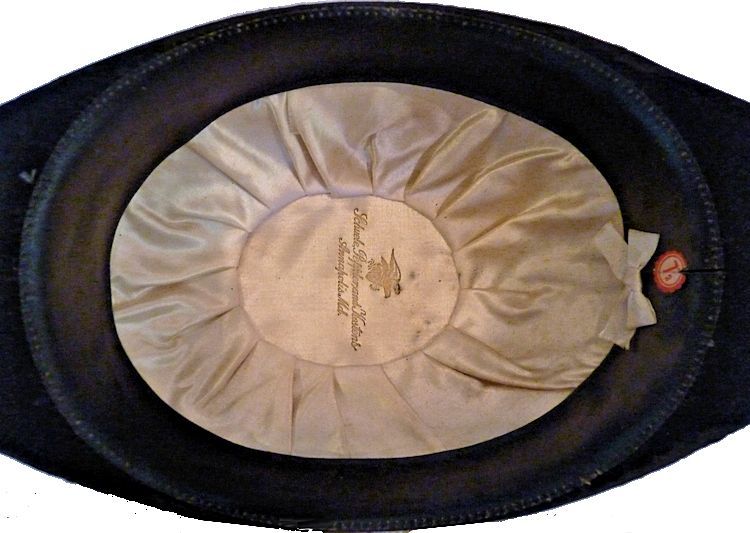 Four
views of the size 7 1/2″ Cocked Hat or Bicorn showing marks of useCONDITION: The hat shows marks of wear primarily on the reverse side, but also one mark
behind the cockade on the obverse and one on the top or crown where the epaulet holder rested. There are also some minor wear
marks on the underside of the epaulets from where they rested in the brackets within the case. EPAULETS: The epaulets are of the finest French spun
gold bullion with all the tassels in excellent condition only showing the desirable patina of age. The two silver bullion
bars the shoulder is that of a lieutenant and a silver bullion anchor is behind precedes a button embossed with the American
eagle over crossed flags. The underside is marked with right or let and is stamped at the shoulder end, “Made in France”. 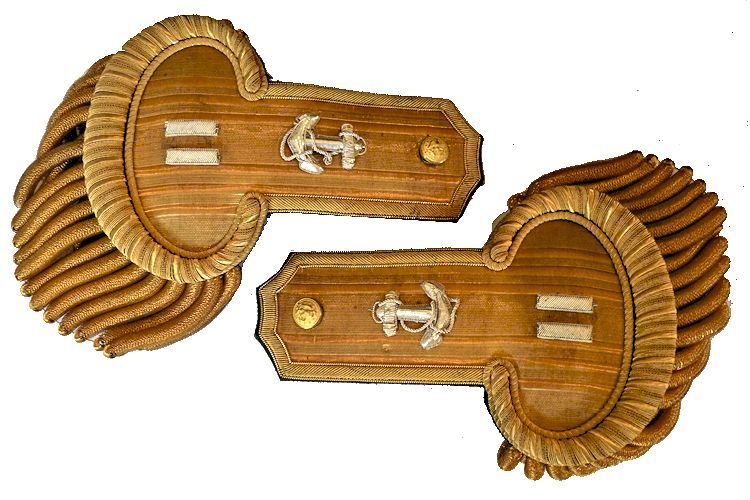 Except for the desirable patina
of age the epaulets are in near new condition  SWORD
BELT RIG:This rig is “like new” condition. It is of the six gold band style which is rarely found today.
The size is set at 38 inches with an additional 1 inch available for adjustment.  The leather tongue
is stamped 38. The unmarked gold washed metal buckle, properly called a plate, is in perfect condition.
After 1852, the standard sword belt was to be of black glazed leather. 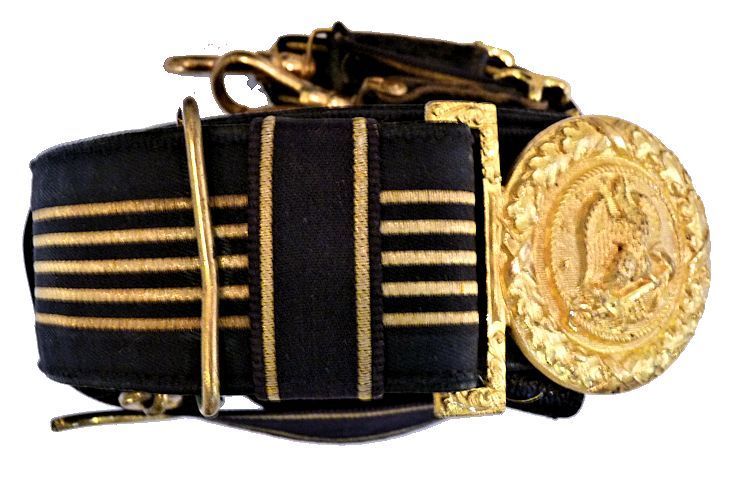 The size 38 belt is near new condition. The design
of the plate is from the 1909 Uniform Regulations 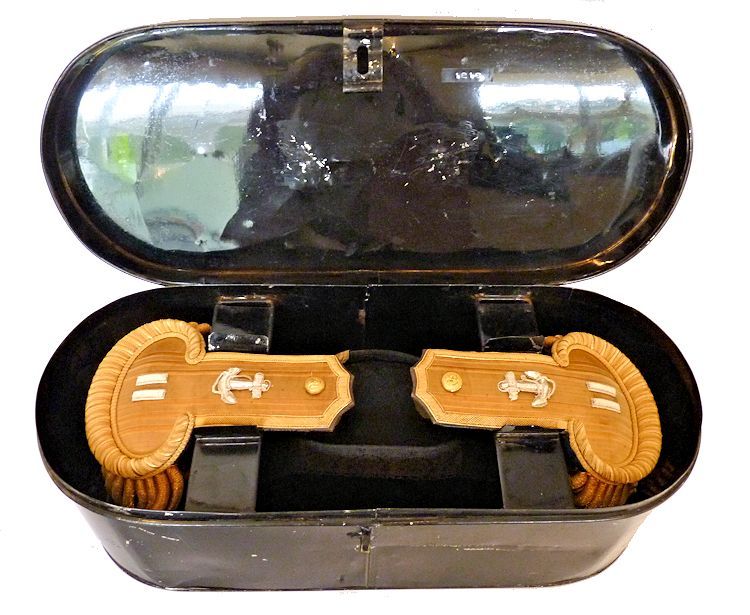 Full Dress cocked hat kit stowed in case
THE
CASE is tin, coated in black lacquer with some loss of paint. The case shows the normal marks of age and
nothing more. It is in good sturdy condition. There is a latch, but no lock or key. The top carries the badge of Schuele, Peppler & Kostens, Annapolis, MD of which there is no record
after 1924. 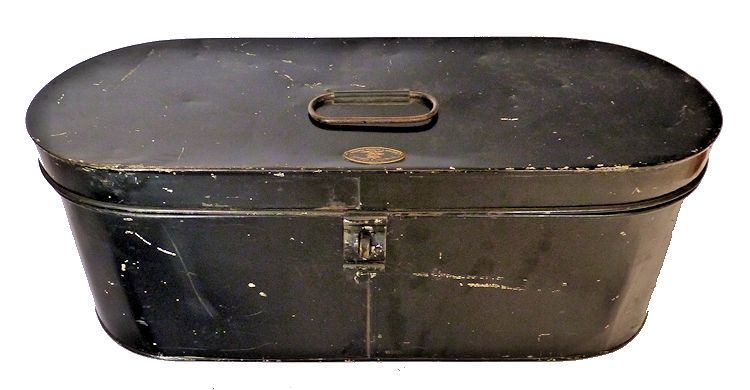