Presented is a beautiful antique builder’s half hull model made to loft the lines of a very special British Royal Yacht
Squadron schooner yacht, TATANIA. It is mounted on a Mahogany backboard with plaque that
describes the vessel’s history and dimensions. Both are recent additions.

PROVENANCE:
This model was most recently owned by a distinguished academician who was collector of nautical antiques who decided to dispose
of his collection.  The hull is marked in faded blue ink on its reverse, “Titania,
70 ft WL”. It is reported to have come from an estate thirty two years ago. Nothing is know of its
earlier history.

TATANIA VS AMERICA MATCH RACE:
In yachting history 1851 is remembered as the year that the
yacht America won the Royal Yacht Squadron’s One Hundred Guinea Cup in a race Round the Isle of Wight. That cup,
and the contest for which it is now the prize, is world famous as The America’s Cup. Schooner America’s owners entered
the yacht for the cup race before realizing that an owner of an English yacht had responded to the challenge placed by Commodore
John Cox Stevens in the RYS Clubhouse soliciting interest in the forthcoming event. The man was noted naval architect
and RYS Member Robert Stephenson. The yacht was Tatania and the race – a match race of the modern style
of The America’s Cup competition – took place a week after the more famous cup race. 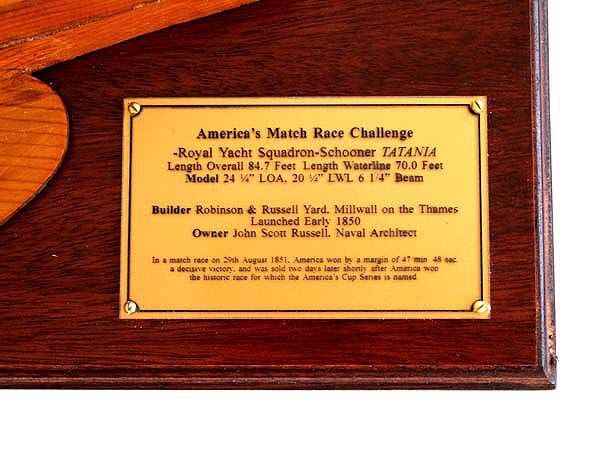 TATANIA’S BRIEF HISTORY: Titania was launched from the Robinson and Russell yard at Millwall
on the Thames, in early 1850. She was 84.7 feet long overall with a 70 foot waterline. She was rigged as a schooner.
The Illustrated London News reported the match race, as it later reported the disastrous fire which consumed the yacht in
May 1852. Being iron, her frame survived the fire and John Scott Russell rebuilt his yacht, renaming herThemis.
LIFT METHOD: Half Hulls were carefully hand carved, and incorporated the latest in the
designer’s knowledge of which shape produced the fastest and most seaworthy vessel. They are usually made using multiple
layers of wood, stacked one on top of each other on a horizontal plane, called lifts. The lifts were made to be taken
apart, and were used as a template to lay off the lines on the floor. These were then enlarged to the vessel’s full
size in a process that was called “lofting”.

BUTTOCK METHOD: In this method, the concept is similar, but the lift’s are placed
together on a vertical plane, and instead of describing the shape of waterlines, they show the shape of the vessels buttock’s
or cheeks. When translated into an elevation drawing, the buttocks appear as curved lines and the stations and waterlines
appear as straight vertical lines. This is in contrast to a plan view of the vessel’s shape where the waterlines are
shown as curved lines and the buttocks and stations as straight lines.

CONDITION: The half hull shows the hand work of scribed or sawn stations at five positions.
It also has a hand scribed waterline. There are stations scribed on her deck in pencil. When
received, it was a state of long term abuse and was refinished in our shop. There is a small chip of wood missing at
the bow at deck level. There is a small chip of wood missing on the transom at deck level. On the underside, just
above the rudder, there is a chip missing on two lifts. The hull is finished in varnish and has an appealing warm golden patina.
The deck is unfinished and unsanded and has station markings in pencil. There are some small nicks on the underside. The
Mahogany backboard is a recent addition, but two mounting holes were already existing indicating the hull had been
previously mounted.