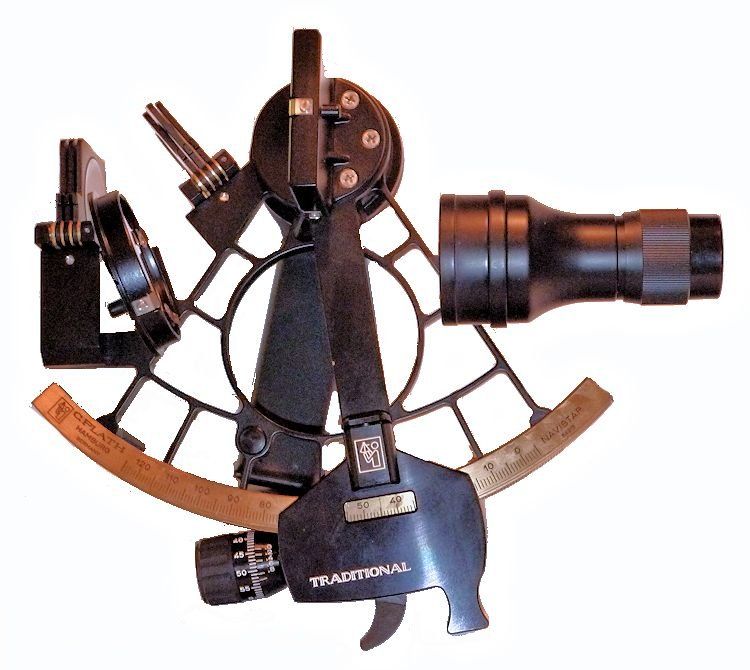 Presented is
the third example of this exact model Carl Plath sextant we’we’ve seen since it’s introduction in 1991. It is in “Mint” condition, and appears to have littlle use or have been well taken care of. This model sextant is fitted with over size mirrors, and a wide angle 4 x 40 telescope. The vernier rotates which allows index error to be set to zero on the scale. In 2010, we sold the second C. Plath Navistar “TRADITIONAL” sextant, Serial No. 64346 we have obtained and this one SN 64215, is the third.

The two are identical except for the telescope. See http://landandseacollection.com/id222.html for the sales listing. This is the first we’ve seen in the last six years. 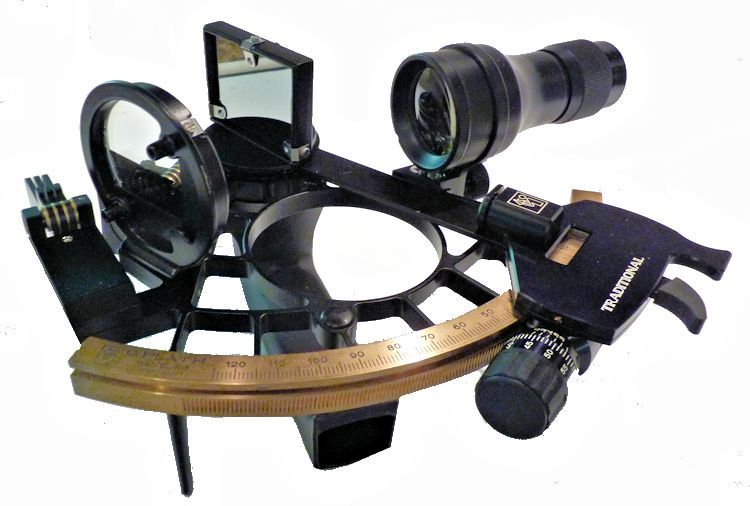 Next to the rarely seen C. Plath “Royal”
of which few were made, the Traditional was the last new, high quality, model Plath
introduced. Both date back to 1989, just 12 years before Plath’s sextant
production ceased. Don’t confuse this sextant with the Navistar Classic which had a “ladder” or “web”
frame, and was made in much greater numbers. Based on the scarcity of the “TRADITIONAL”, very
few exist, and even fewer with the quick release trigger.

It has these new, and exclusive “state of the art” design features:

Special
circular frame
Trigger action
tangent screw release
Oversize
mirrors with whole horizon
Special
wide angle telescope
adjustable vernier for “0“ index
error
Miniature
number D357H batteries and light emitting diode
Adjustable
Makrolon handle for ergonomic fit
Larger
housing for horizon mirror reduces stray light
Light
weight aluminum case with Plath OEM green foam interior
DESIGN
FEATURES: The Navistar Traditional,
is second only to the Navistar Royal, in P lath’s line of premium sextants and was made in limited quantities. Because
it was a new design in 1989 with many advanced features, it sold for more than other sextants. The Traditional’s
visual clues are the Circle frame design, and the special micrometer drum with a rotating vernier, newly designed
telescope and the usual Navistar brand imprint. The rotating vernier has six indents and reads to 10 seconds of arc. You turn it to match the
“0” point with the “0” on the micrometer drum so that index error reads zero. This example has
the exact same features. It comes with its original Plath brush, adjustment wrench and cleaning
cloth. C. Plath quit producing sextants around 2001. The parent company has completely
liquidated everything including machinery, equipment and spare parts.
PROVENANCE: From the estate sale of Captain Bob Alonso, a long time resident of Savannah, GA. Capt. Alonso was a tug
boat captain for many years who operated on coastal waters and offshore. He was said to be very meticulous in keeping
his belongings in top notch condition. The sextant was likely used as a back up for electronic means of navigation or
as a source of pride in doing things the old fashioned way.
CONDITION: Is in Like New condition showing little use.. Both mirrors show as NEW. The illumination works. The
bronze arc shows “as new”. There is no index or side error. There is no certificate which is not uncommon, and unnecessary
in C.Plath sextants since they were all built to a tested accuracy of 20 arc seconds or less. For practical purposes
this makes them error free in use. The aluminum case has a couple of minor scratches and other marks from handling, otherwise
it to is perfect.Two keys are included. 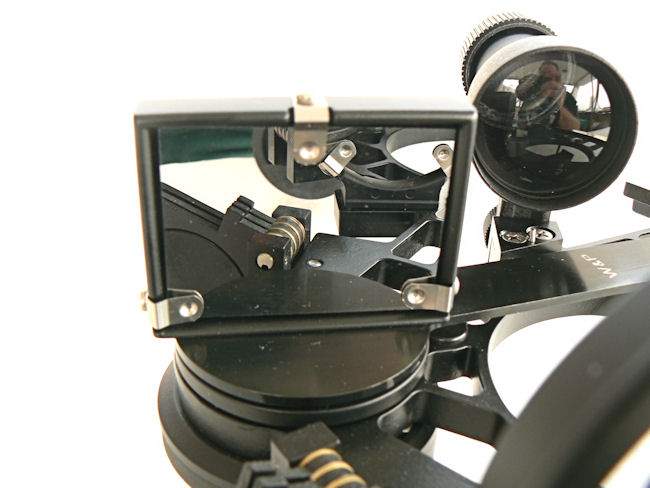 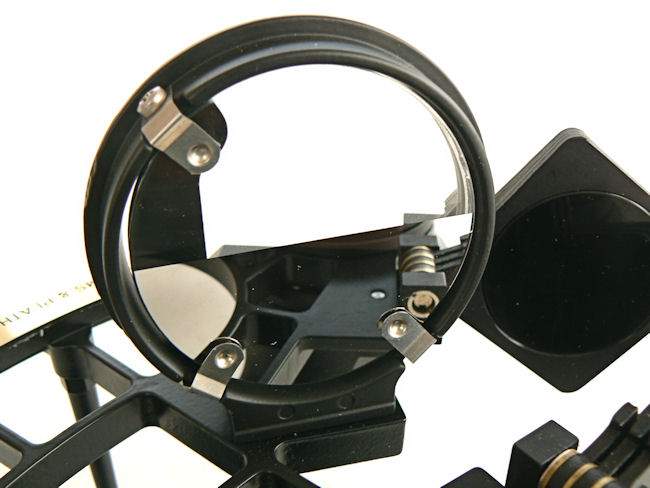 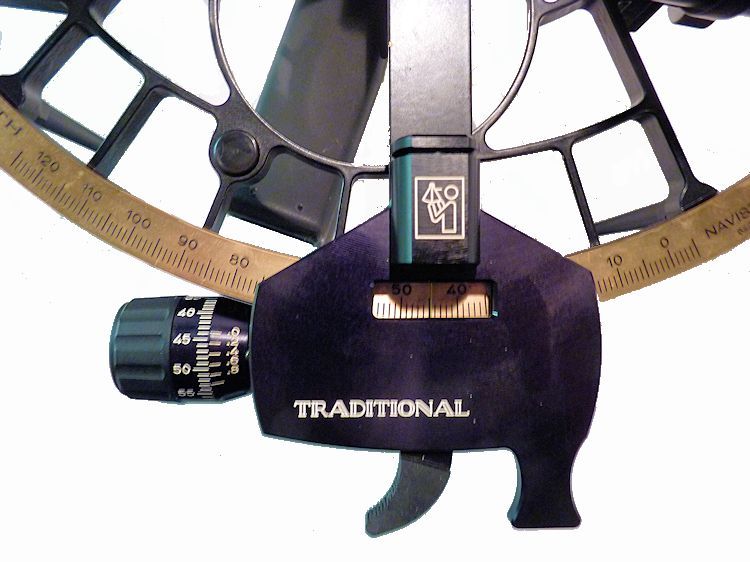 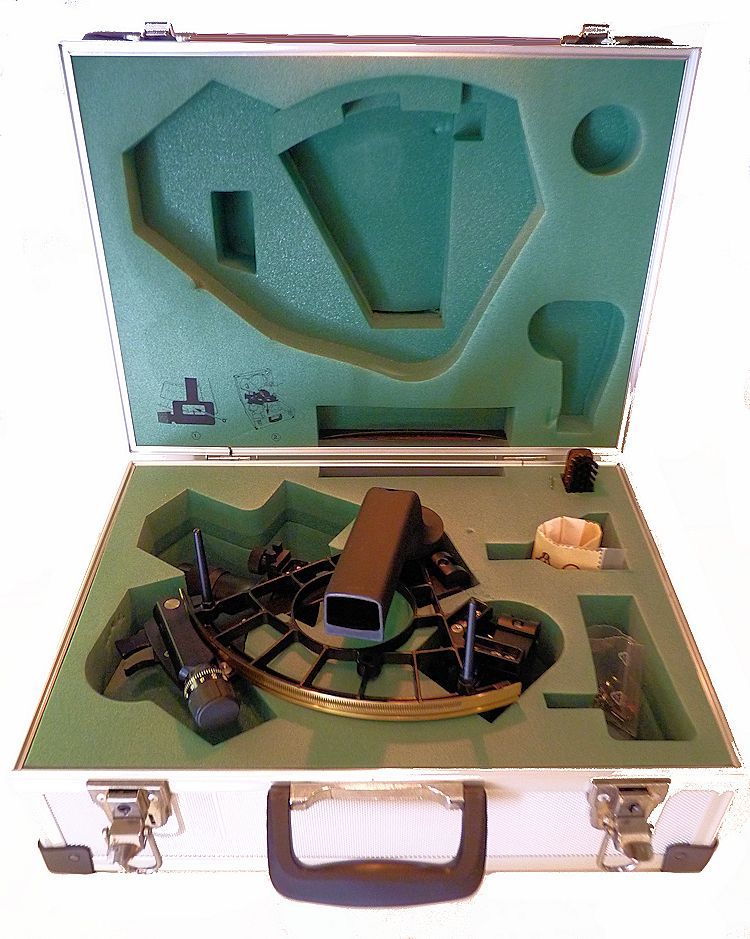 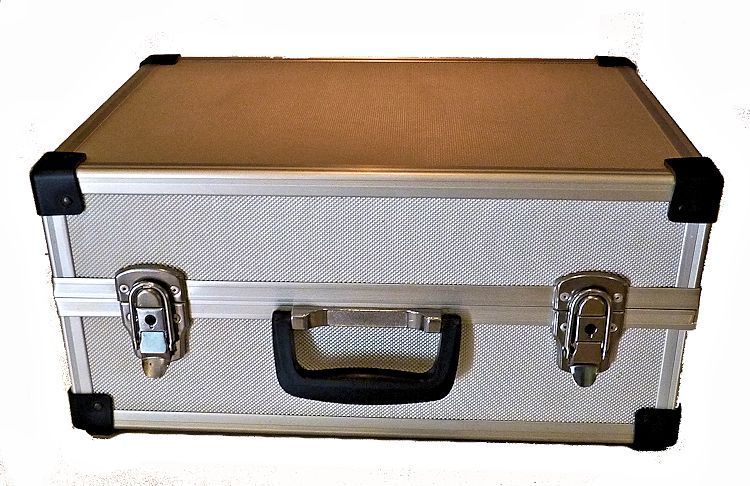 This is the only the third example of a C. Plath “TRADITIONAL”
sextant with trigger release that we have seen and is suitable for a collector or for use at sea . It requires someone who
can appreciate the uniqueness of this style sextant, and is willing to pay for this level of quality and excellence

OUR QUALIFICATIONS: We are one of the few company’s still selling navigation instruments that know
anything about them. For purposes of judging whether Joel’s opinion counts, he was the editor of the chapter on sextants
of the 1977 Edition of “Bowditch”, The American Practical Navigator, NAVPUB 9; a member of the U.S. Naval Academy
Navigation Symposium, 1975 -1978; the author of a book on marine sextants, Cornell Maritime Press,1975, and the founding president
of Nautech Maritime Corporation which partnered with Tamaya of Japan in the introduction of the MS 733 Spica, the MS 833,
Jupiter, MS 933 Venus sextants and the famous NC-2 navigation computer, in the U.S. market. Joel is a retired Master Upon
Oceans, and held a U.S. Navy “D” Qualification as a Senior Skipper – Oceans. For six years he was a Varsity Offshore
Sailing Team Coach at the U.S. Naval Academy. Some of his past and present memberships include the: Association of Naval Aviation,
Silver Wings, The Tailhook Association, Naval Academy Sailing Squadron and Alumni Association, McCampbell’s Aces Squadron,
Naval Historical Foundation, and the Naval Order of the United States.
C. PLATH COMPANY HISTORY: In brief, Carl Plath started manufacturing sextants,
in addition to other nautical products, in Hamburg Germany in 1862 though the purchase of the David Filby instrument company
though the company’s origin dates back to 1837. As a result WW II, C.Plath was dismantled completely by the occupation
forces. Around 1950, various prohibitions were lifted, and C. Plath was allowed to begin production again of sextants and
other nautical instruments. Also in 1949,C.Plath was offered a gyrocompass patent and in 1951 the first gyrocompass designed
to this patent was presented to the public. C.Plath progressed from the role of instrument maker to that of a modern marine
navigation equipment manufacturer. In the following years the product range was expanded by many more modern designs such
as autopilots, speed logs, radio direction finders, etc.
In
1962 C.Plath was acquired by Litton Industries, a large American concern.The C.Plath North American Division was set up in
1978 in College Park near Washington. 1996 saw the introduction of the world’s first fiber-optic solid-state gyrocompass
by C.Plath. The first ever gyrocompass with no moving parts. Sperry Marine was formed in 1997 with the combination of C.Plath,
Decca Marine and Sperry Marine with more organizational changes yet to come. After 163 years, C.Plath changes its name to
Sperry Marine in May 2000. In 2001 Sperry Marine becomes part of the Northrop Grumman Corporation. In the 1990’s Plath
came out with a series of new sextant designs with overlapping designs and confusing names. They seemed to have lost their
way. Shortly thereafter, C. Plath quit producing sextants. The parent company has completely liquidated everything including
machinery, equipment and spare parts.