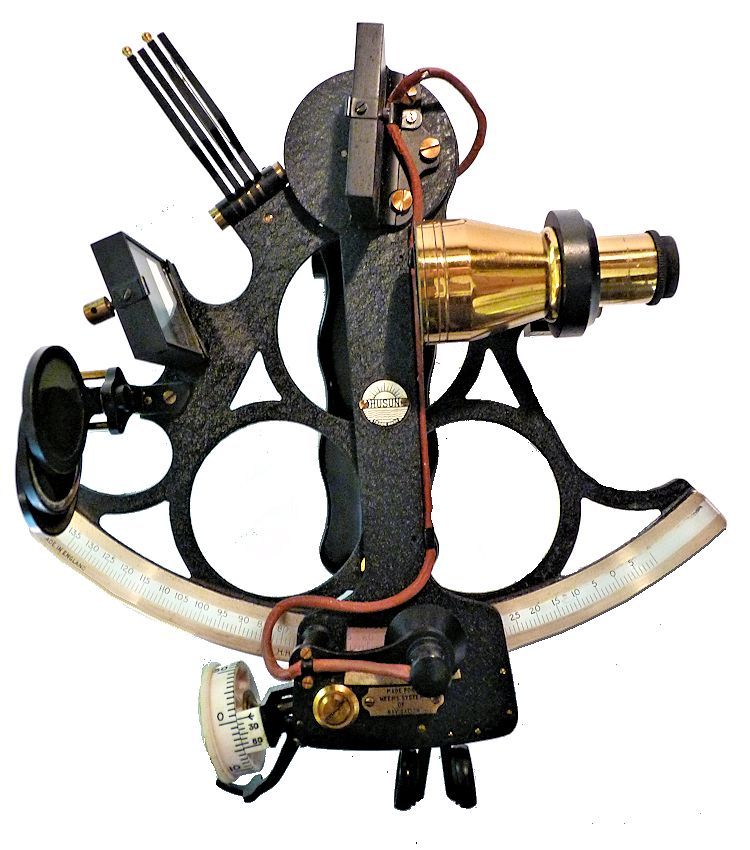 PRESENTED is
a Henry Hughes Three Ring sextant in like new condition that was purchased by then LCDR P.V.H. Weems, USN-Ret on
11 April 1940 for the Weems School of Navigation. Weems is the famous award winning celestial navigator that authored
books on air navigation, taught Charles Lindberg how to do it, invented a WW II navigation plotter and split seconds
watch and the star curve templates which simplified their identification. He was awarded two gold medals for his achievements.
This instrument was then sold to a student of Weems who served as an instructor teaching celestial navigation during WW II.
It was purchased from this person’s estate and appears to never have been used by him even in the classroom. Accompanying
the sextant is the original Hughes invoice to Weems System of Navigation in Annapolis, MD., and three pages of hand written
notes, presumably those of the last owner.
DESCRIPTION: Extra fine Word
War II Era mariner’s sextant with an extended arc from  -5 to +135 degrees that almost equals a quintant. It has
a graduated insert made of a proprietary metal that Hughes called “Platina“ (platinum) arc and vernier, with
brass frame and fittings. Engraved at mid-center of the arc at the bottom is “Henry Hughes & Son Ltd.,
London”. Hughes was one of England’s foremost “Class A“ instrument makers. Over this is the serial number
23936. The instrument is shown with the 2 1/2 power Star scope fitted.

The original inspection certificate issued by Hughes in October 4, 1940 is mounted in the case. No error is
greater than 30 arc seconds over its usable range.
ACCESSORIES: All the original
accessories are included consisting of a terrestrial sighting tube, the aforesaid star scope, bottle of oil, adjustment
pick for mirrors, and key for the case. 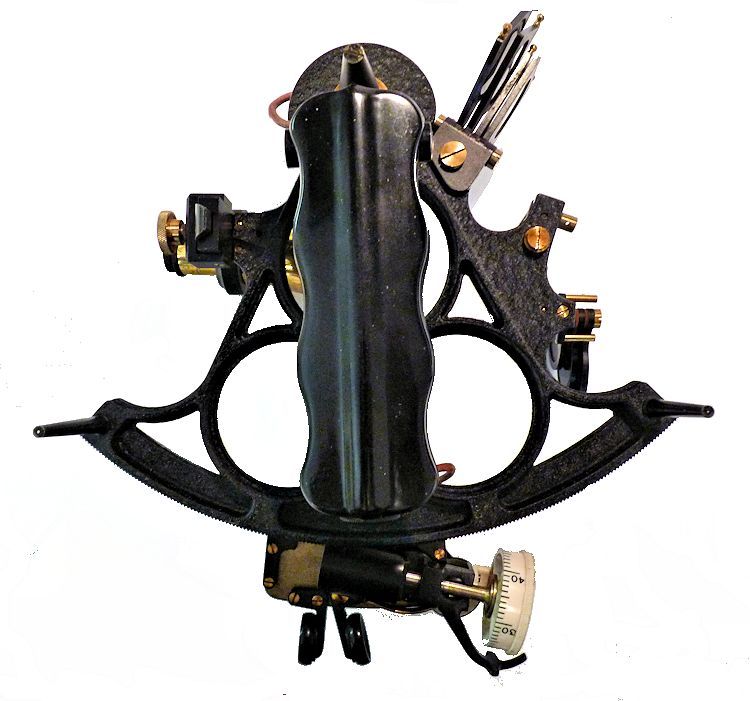 The
three ring design was used by C. Plath and the English firms of both Heath and Hughes in vast quantities because of the inherent
strength of the frame’s design. This sextant is fitted with larger than the normal size mirrors for this period so it
is highly suitable for twilight sights when the low powered Star scope is fitted. 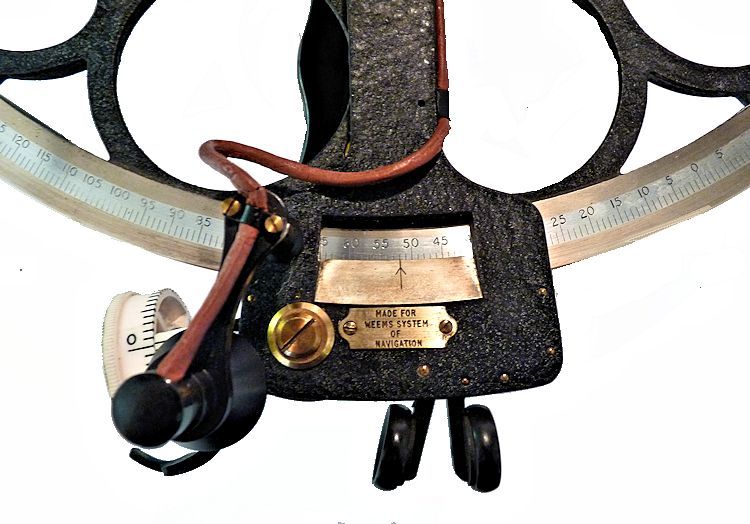 Weems’ tag, Serial No. on arc. Platinma insert on arc

INSTRUMENT
CONDITION: The mirrors are in remarkably near new condition and show little age with only the horizon mirror
having two tiny specs. The index arm quick release clamp, and swing arm magnifier are complete and in good working order. Regrettably,
the lens cap for the scopes is missing. This is a rarely used piece. The lighting system works. The frame has a
beautiful midnight black wrinkle finish. Overall, the instrument is in exceptional condition with 100% of the original factory
varnish on the brass hardware. This is remarkable for its 76 year age. 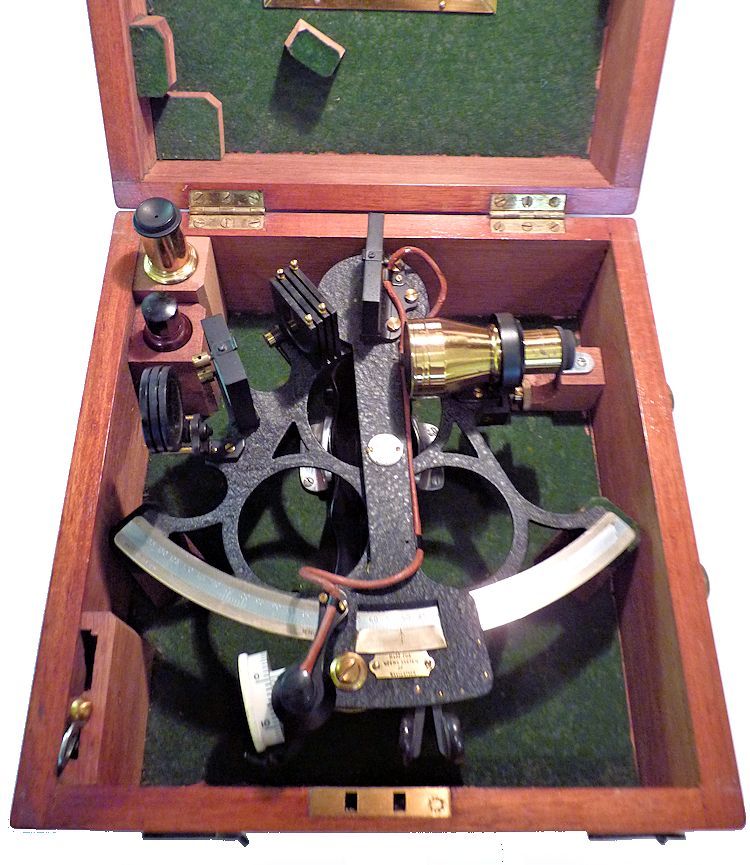 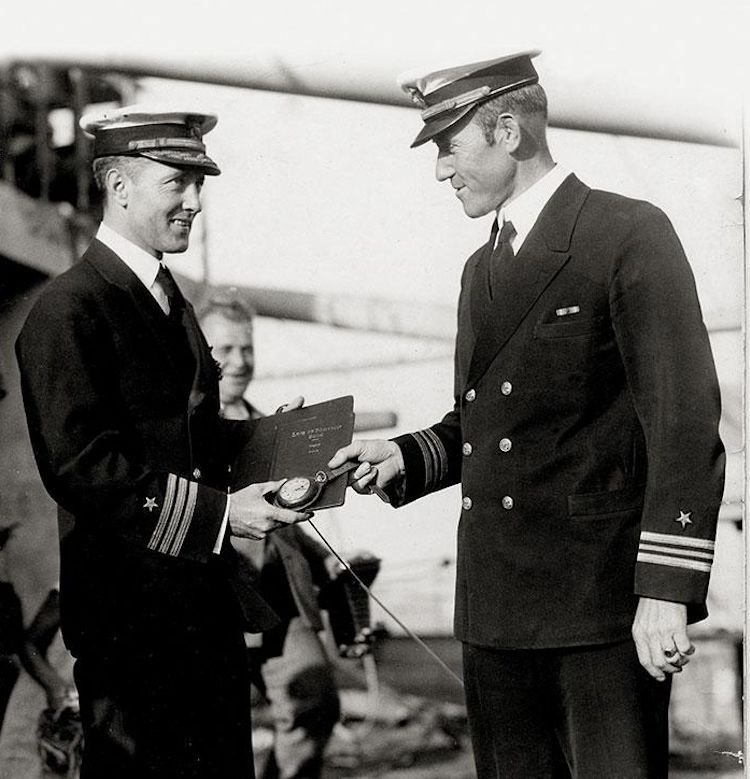 BRIEF HISTORY OF CAPT. P.V.H. WEEMS, USN-Ret: Philip Van Horn Weems was born in Tennessee, the
son of Joseph Burch and May Elizabeth Rye Weems. When he was a child, he and his six brothers and one sister were orphaned.
He received an appointment to
the United States Naval Academy at Annapolis in 1908. At the Academy, he excelled at various sports, and was an All-American
center on the Navy football team. He graduated in the class of 1912 and was commissioned an ensign. He specialized in navigation
and taught at the Academy. In 1915, he married Margaret Thackray. Picture on the right shows LCDR
Weems congratulating then CDR Richard E. Byrd prior to his elevation to RADM on his flight to the South Pole
in 1929. In 1927, Weems was sent to the
Aircraft Squadron Battle Fleet, before being assigned to the tanker USS Cuyama as its executive officer from 1928 to 1930.
He retired for the first time in 1933 with the rank of lieutenant commander. Weems returned to active service in 1942, serving
in World War II as a convoy commander, for which he was awarded a Bronze Star. He was promoted to captain in 1945 and retired
the following year.With the dawn of the space age,
he was called upon to teach space navigation at the Naval Academy from 1961 to 1962.The Weemses had two sons and a
daughter, Margaret. Both sons predeceased him. Major Philip van Horn Weems, Jr. was killed in the southwest Pacific in 1943,
while Lieutenant Commander George Thackray “Bee” Weems died while testing an airplane. Philip Van Horn Weems died
on June 2, 1979, at the age of ninety.Navigational contributionsWeems and his wife established
the Weems School of Navigation in 1927. After Charles Lindberg completed his celebrated solo flight across the Atlantic Ocean,
the Navy assigned Weems to teach him celestial navigation for a month in 1928. Fred Noonan, Amelia Earhart’s navigator
on her last flight, considered him his mentor.  After his first retirement, Weems wrote several books; Air Navigation
(1931) was particularly well received, and was awarded a gold medal by the Aero Club of France. In 1935, he patented the Mark
II Plotter. Another invention was the Second Setting Watch. According to the Institute of Navigation, however, “his proudest
achievement” was the Star Altitude Curves, which simplified finding one’s position; it was adopted by the Army Air
Corps prior to World War II.HonorsIn 1953, Weems was awarded the
Magellanic Premium, an honor given for contributions to navigation, astronomy or natural philosophy. It has been awarded only
33 times to 40 people since it was established in 1786. In 1960, Weems received a gold medal from the American Institute of
Navigation. The institute also created an annual award named after him. In 1968, the National Geographic Society awarded him
the John Oliver la Gorce Medal. Mount Weems in Antarctica is named in his honor. Credit

Henry Hughes & Son was founded in 1838 at 120, later 59, Fenchurch St. in London, as
an optician and maker of chronographic and scientific instruments. Henry died in 1879 and his son Alexander succeeded
him as chairman. The firm was incorporated as Henry Hughes & Sons Ltd in 1903 and in 1923, the company produced its first
recording echo sounder. In 1935, a controlling interest in the company was acquired by S. Smith & Son Ltd resulting in
the development of marine and aircraft instruments. Following the London office’s destruction in the Blitz of 1941, a
collaboration was entered into with Kelvin, Bottomley & Baird Ltd, resulting in the establishment of Marine Instruments
Ltd. Following the formal amalgamation of Kelvin, Bottomley & Baird Ltd and Henry Hughes & Sons Ltd in 1947 to form
Kelvin & Hughes Ltd, Marine Instruments Ltd acted as regional agents in the UK for Kelvin & Hughes Ltd who were essentially
now a part of Smith’s Industries Ltd founded in 1944 as the successors of S. Smith & Son Ltd. The well known
“HUSUN” trademark was in use starting in the 1920s.

One sighting tube
One low powered Star scope
Mirror adjustment pick
One vial of oil  (old
should not be used)
The nontarnishing platinum scale is calibrated -5 to +135 degrees with a vernier scale on the drum reading from 0 to 60 arc seconds
in 15 second intervals. The sextant has four rectangular shades for the index mirror, and three round shades for
the horizon mirror, all in good order. The telescope’s distance from the frame may be adjusted by turning a knob at the
back of the rising piece. This most useable feature was discontinued in later sextants because of its high cost. The instrument
and it’s accessories are housed in a square Mahogany carrying case which has brass hinges and latches and a lock, and
key. The case has what may be a later lined green felt interior. The exterior has bright varnish with the top having a three
inch crack on the top right and a crack on the bottom running its length. These do not effect its strength. 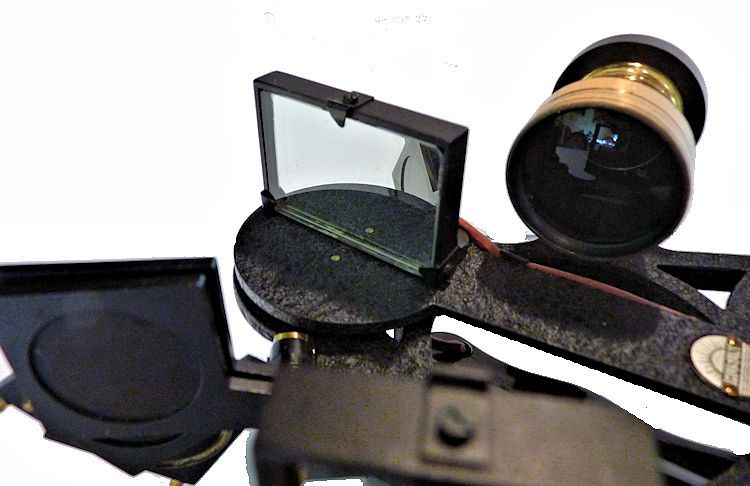 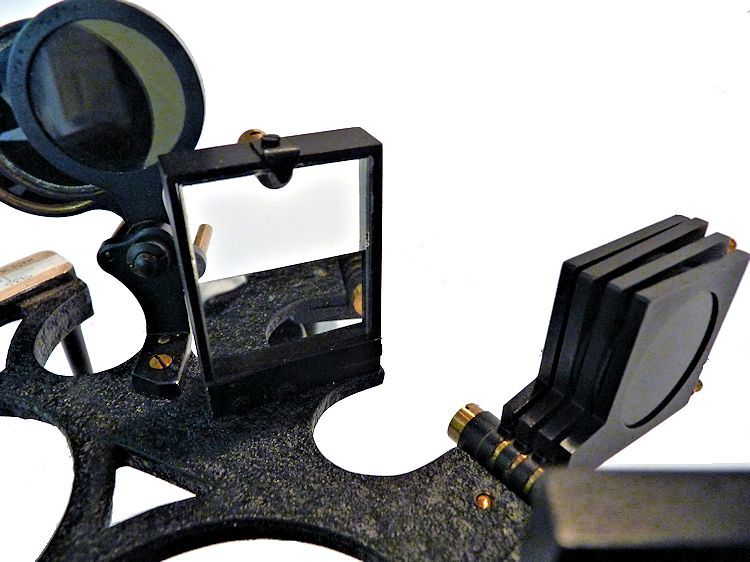 Index mirror shown over horizon mirror. Both near new 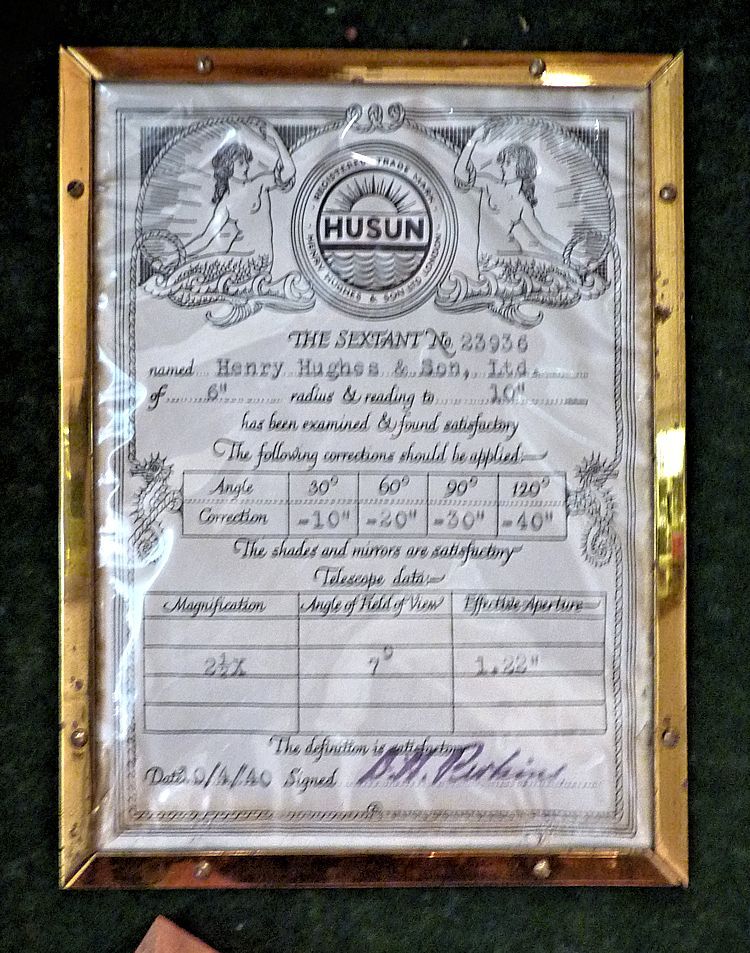 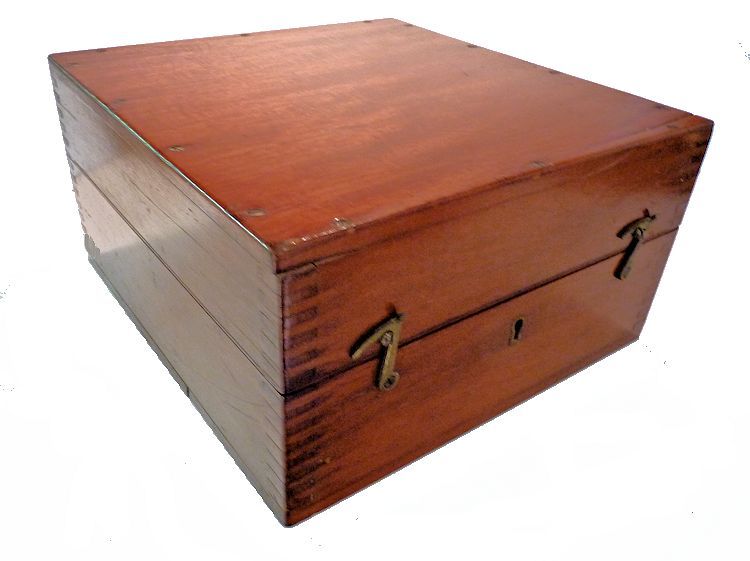