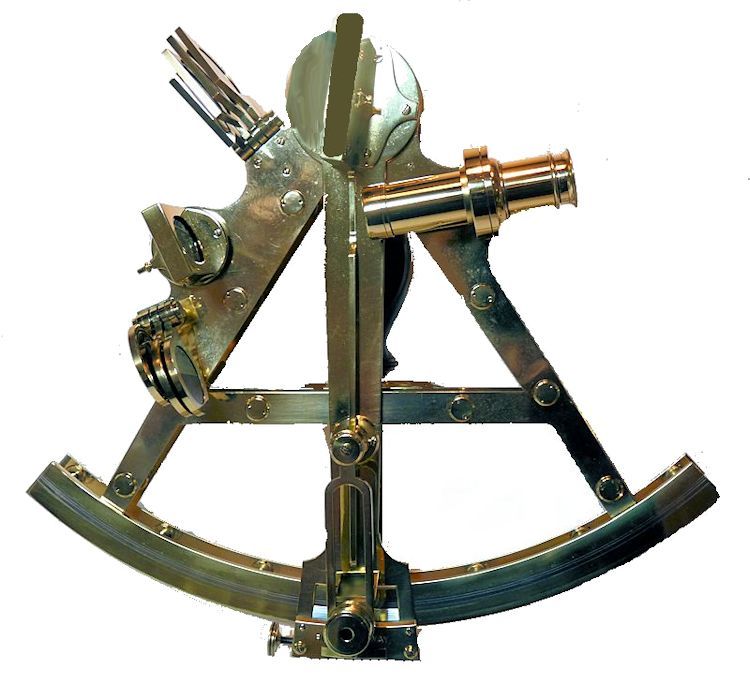 DESIRABLE PRESENTATION GRADE TROUGHTON & SIMMS were the best of the English instrument
makers. This Presentation Grade instrument dates from their partnership and belongs in a collection of fine nautical
antiques or as an important gift.

PRESENTED is a rare double frame quintant or sextant that was made by Troughton & Simms – London, for presentation to Robert.
T. Way. It carries serial number 2264 on its center limb which is 700 less than a similar instrument which we sold in
2015. The instrument was received by us in its original polished brass and was repolished and lacquered to its original status.
The arc is brass with a silver insert for the gradations. Edward Troughton was the inventor of this design and patented it
in 1788 with other makers copying his design. The instrument’s arc is graduated into 145 degrees which classifies it as a Quintant. Brass
became the accepted material of choice for sighting instruments in the later 19th Century because of its strength and durability.
The double frame design was expensive to make and never gained the popularity of the more common single, cast-frame instruments.
Consequently, there are few that come to market. Double frame instruments look spectacular so they make an ideal gift and a wonderful reminder of navigation in the the 19th Century. 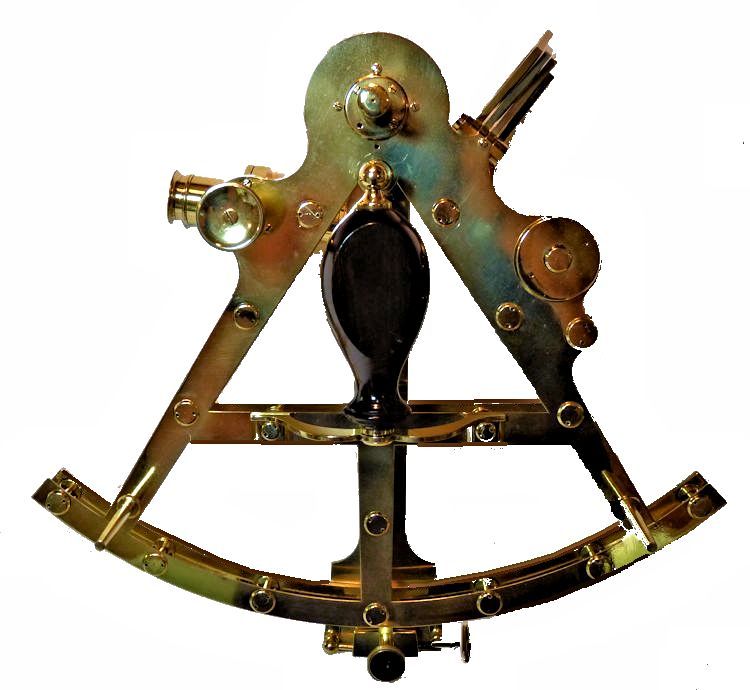 As pictured above, the back of the sextant shows the two straight bar pillar frames
that are held together with twenty one pillars, and their screw fittings. There is a turned Rosewood handle which is
cracked down its length, but still holds strongly. The tangent screw and clamping screw are positioned on the back of the
index arm. The device has four square index shades, and three round horizon shades. The telescopes are attached to a perpendicular
rising-piece which is adjusted in and out by a milled knob. There is also a focusing magnifier traveling over the vernier.
The brass limb is inlaid with a sterling scale from -5° to 145° divided each 5 degrees. The sterling vernier
measures from right to left from 0 to 10° in arc seconds. 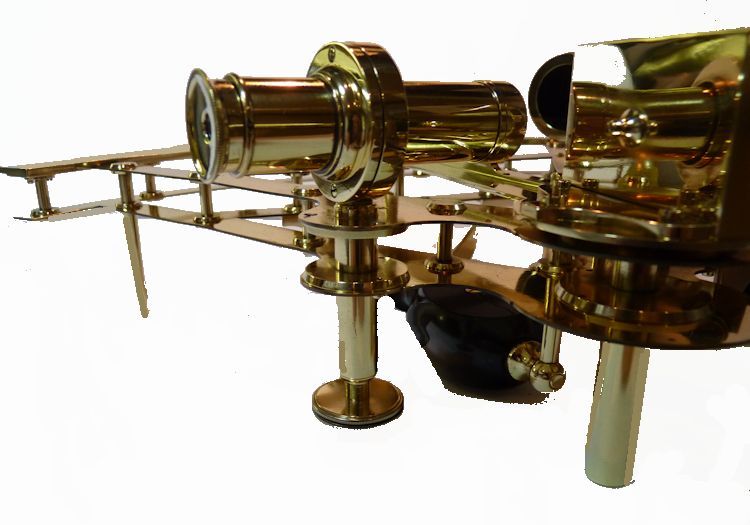 The picture above shows the adjustable rising piece with the knurled knob at the bottom which allowed for the telescope to
be moved toward or away from the frame thereby increasing the visibility of the horizon. This is a an extremely rare and very fine
example of a double frame, pillar,  presentation grade instrument made by Troughton & Simms, one of
England’s most prestigious instrument makers! 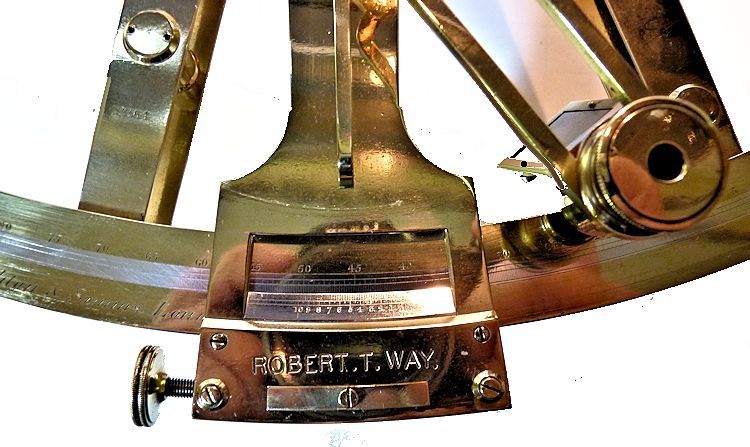 Robert T. Way and Troughton & Simms- London Maker’s
Mark to left
INSTRUMENT & CASE CONDITION: One telescope is a pure sighting tube for
terrestrial objects. The longest scope with optics has cross hairs that displays the object upside down which was ideal
for astronomical use. The short scope with optics, does not focus properly, but displays the image right side up. There is
one other scope that is unpolished with optics that does not focus. Both mirrors, considering their age, are in very good
condition. The swing arm magnifier is complete and in good working order. Both sets of shades, i.e., filters are in perfect
condition. The endless tangent screw turns easily. Both the small screw driver and the adjusting wrench for the mirrors is
missing. The fan shaped case is in excellent
condition and the varnish has pleasantly mellowed with age. There are four pockets on the right side and only two
end lens caps are present. There also is a large wood slot on the left which is empty. Likely an English mariner, there
is no record of Robert T. Way on the internet. 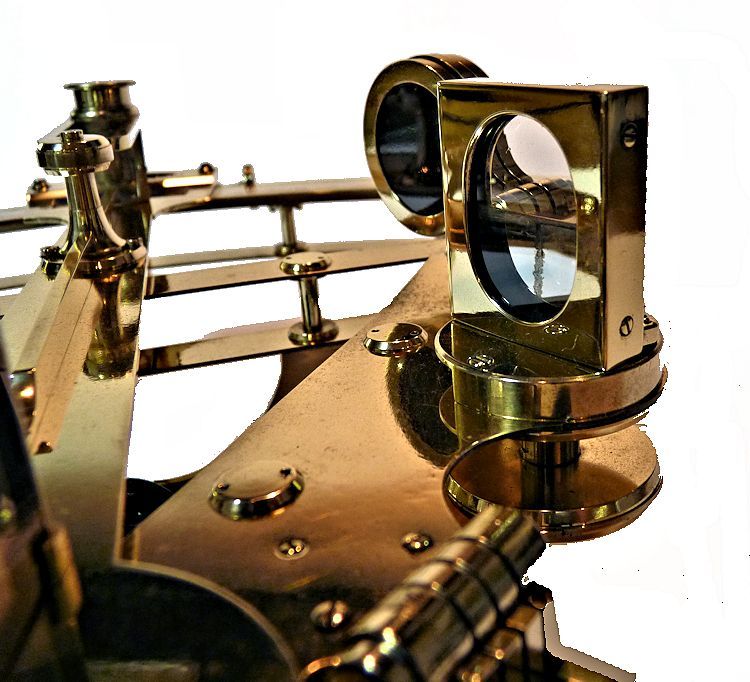 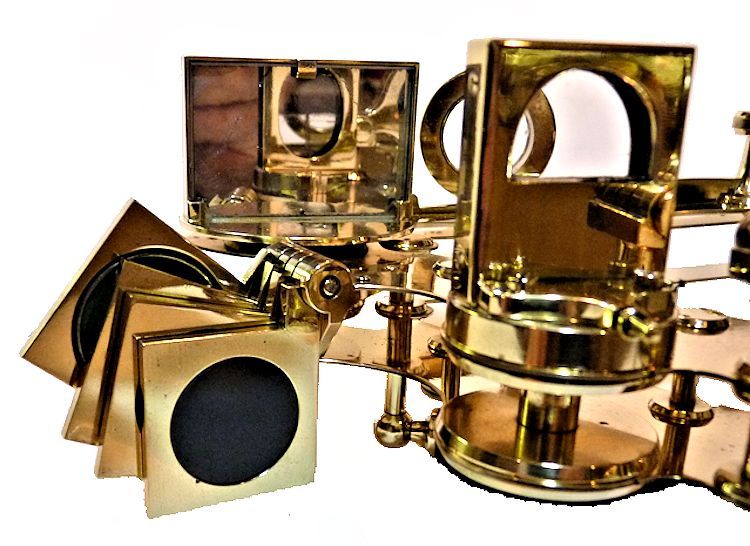 The index mirror is
also in very good condition

HISTORIC BACKGROUND: Edward Troughton, FRS (October 1753 –12 June 1835)  was a British instrument maker who was notable for making telescopes and other astronomical instruments.
Troughton was born at Corney, Cumberland. In 1779, after serving
an apprenticeship with his elder brother John, he became his partner and soon established himself as the top maker of navigational,
surveying and astronomical instruments in Brittan. In 1795 he delivered the Troughton Equatorial Telescope
to the Armagh Observatory, a 2 inch aperture refractor telescope mounted equatorially, and its first major instrument since
its founding in 1790 (It survived into the 21st century also).  He created the Groombridge Transit Circle in 1806, which
Stephen Groombridge used to compile his star cataloger.[3] He did not merely build instruments, but designed and invented
new ones such as his double frame instrument of 1788. Troughton was awarded the Copley Medal of the Royal
Society in 1809. He was elected a Fellow of the Royal Society in March 1810. In
1826, after John’s death and in failing health himself, he took on William Simms as a partner and the firm became known
as Troughton & Simms. Troughton was color blind. On his death in
1835, he was buried in Kensal Green Cemetery. TROUGHTON & SIMMS, THE SUCCESSOR: Troughton & Simms was a British instrument-making firm, formed when Edward
Troughton in his old age took on William Simms as a partner in 1826. It
became a limited company in 1915, and in 1922, it merged with T. Cooke & Sons to form Cooke, Troughton & Simms. The firm produced hundreds of astronomical instruments such as mural circles,
transit circles, sextants, and other astronomical instruments for observatories around the world. Previously, Troughton had
been a sole proprietor, and before that he was in partnership with his brother John. John died and Edward took on Simms in
1826. Edward Troughton died in 1835. This maker is is listed in Sextants
at Greenwich”, “Sextants at Greenwich” by W.E.J. Mozer Bruyns, which catalogs the collection of the British
National Maritime Museum at Greenwich, England. 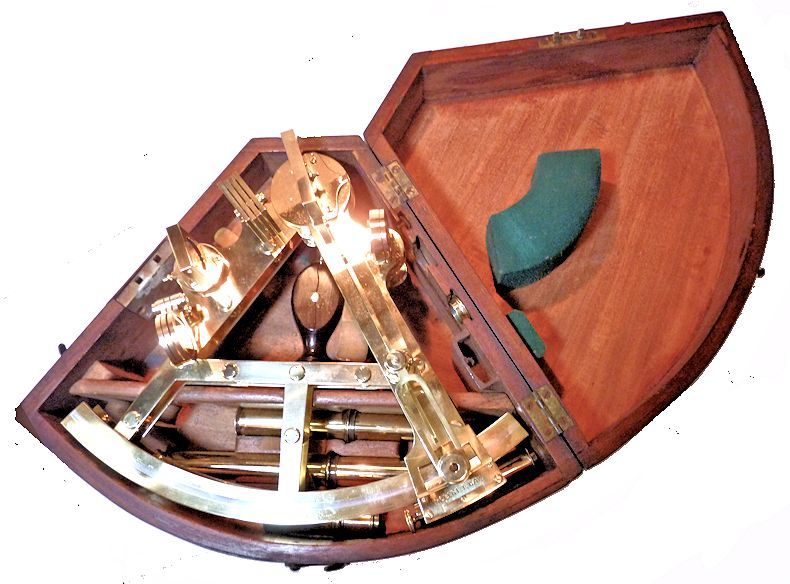 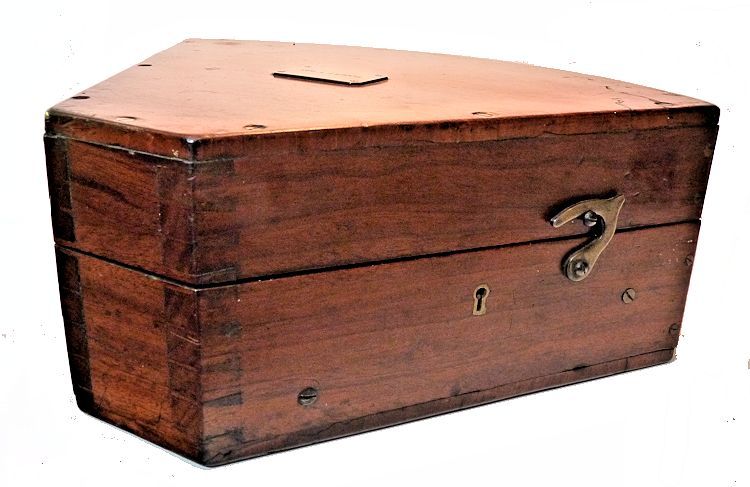 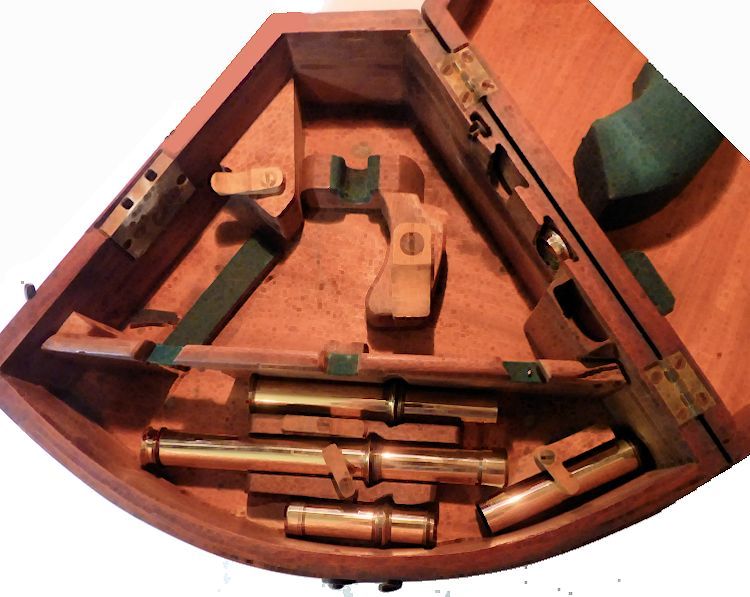 The arrangement of the four sighting
tubes is complex.