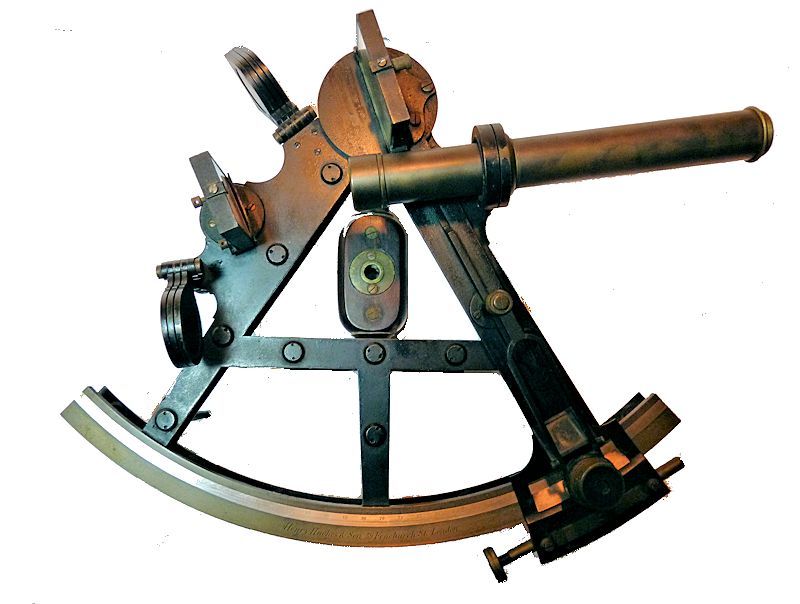 TROUGHTON & SIMMS and Henry Hughes & Son were the best
of the English Class A instrument makers. This high quality instrument has its original factory black finish.
It belongs in a collection of fine nautical antiques or as an important gift

PRESENTED is a
rare double frame quintant or sextant that we believe was made by Troughton & Simms – London, the patent holder
of this design since 1788, because it is exactly the same as those made by them except for the platinum arc. It has
survived all these years in its original hardwood, brass strapped case with campaign hardware, and carries its factory painted
midnight black coating. The serial number 2751 is on its center limb. Beneath it, on its lower limb, it is marked, “Henry
Hughes & Son, 59 Frenchurch St., London” which is the name of the instrument maker and dealer for whom we believe
it was made. The instrument’s ebony handle has a threaded brass insert which was used to mount the instrument on a horizontal
plane to take bearing angles of terrestrial objects. It is in a square case whose exterior was coated with years of grime,
and was cleaned to its present, as near new condition. There is a fresh brass plaque on the cover of the case. The two original brass sighting
tubes and two telescopes with front and rear optics were left “as found”. The arc is brass with
a platinum insert for the gradations and is marked “Platima & Gold”, 2751 above the 75 degree mark.
Edward Troughton was the inventor of this design and patented it in 1788, with other makers copying his design, so it is possible
that the Hughes firm is the actual maker. The instrument’s arc is graduated into 155 degrees which classifies it as a Quintant. Brass
became the accepted material of choice for sighting instruments in the later 19th Century because of its strength and durability.
The double frame design was expensive to make and never gained the popularity of the more common single, cast-frame instruments.
Consequently, there are few that come to market. Double frame instruments look spectacular so they make an ideal gift and a wonderful reminder of navigation in the the 19th Century. Back of Troughton & Simms Double Frame sextant marked Henry Hughes & Son 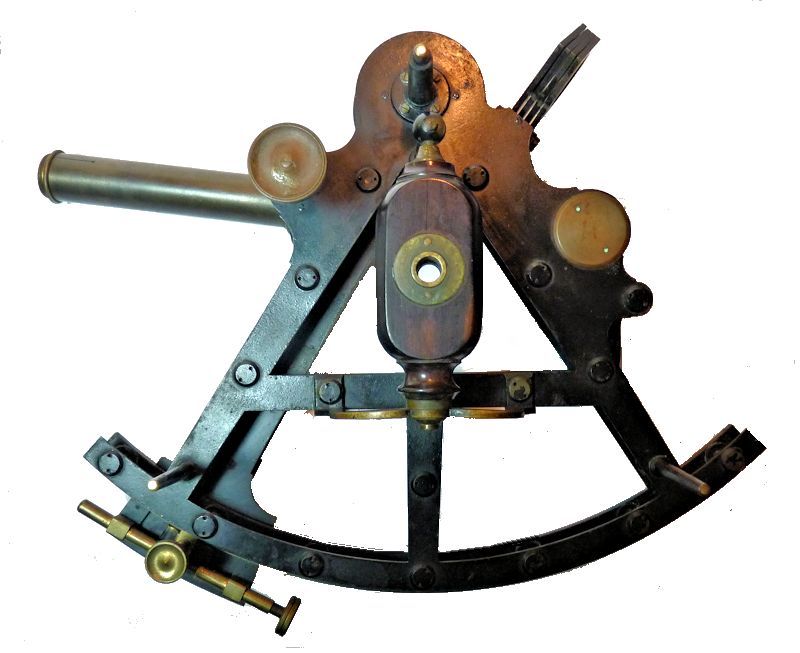 As pictured above, the back of the sextant shows the two straight bar pillar frames
that are held together with twenty one pillars, and their screw fittings. There is a turned Rosewood handle with threaded
brass insert for mounting the instrument when taking bearing angles. The tangent screw and clamping screw are positioned on
the back of the index arm. The device has four square index shades, and three round horizon shades. The telescopes are attached
to a perpendicular rising-piece which is adjusted in and out by a milled knob. There is also a focusing magnifier traveling
over the vernier.  The brass limb is inlaid with a tarnish free platinum scale from -5° to 155° divided
each 5 degrees. The platinum vernier measures from right to left from 0 to 10° in arc seconds. Henry Hughes marked double frame sextant rising piece 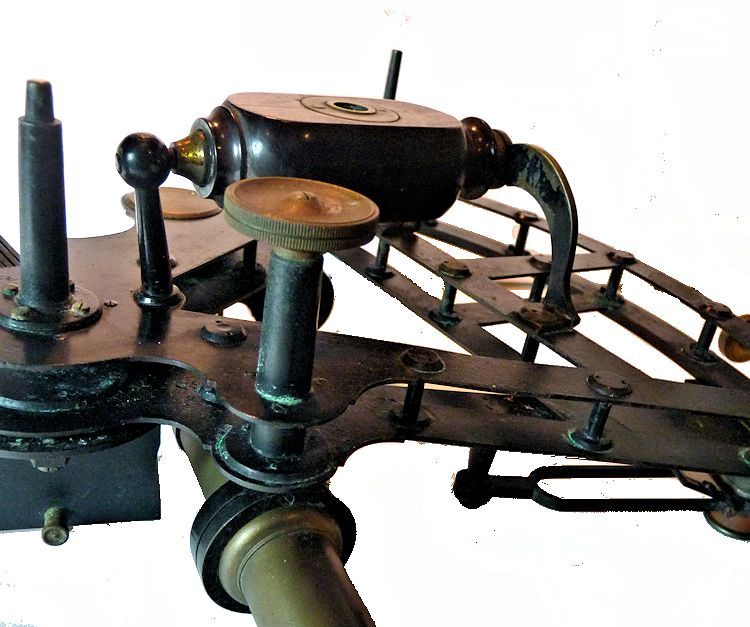 The
picture above shows the adjustable rising piece with the knurled knob at the bottom which allowed for the telescope to
be moved toward or away from the frame, thereby increasing the visibility of the horizon. This is a an extremely rare and very fine
example of a double frame, pillar  presentation grade instrument made by one of England’s most prestigious
Class A instrument makers!
Close-up of vernier of Troughton/Hughes quintant 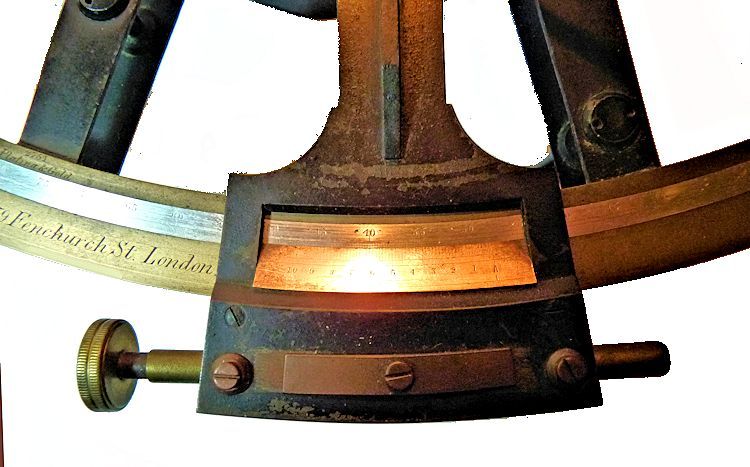 Henry Hughes & Son Imprint to left. Vernier read from 0 to 10
arc secondsINSTRUMENT & CASE CONDITION:One telescope is a pure sighting tube for
terrestrial objects. The longest scope with optics has cross hairs that displays the object upside down which was ideal
for astronomical use. The short scope with optics, does not focus properly, but displays the image right side up. There is
one other scope that is unpolished with optics that does not focus. Both mirrors, considering their age, are in very good
condition. The swing arm magnifier is complete and in good working order. Both sets of shades, i.e., filters are in perfect
condition. The endless tangent screw turns easily. The small screw driver is missing and the adjusting wrench for the
mirrors is present.  There is no key The square, brass strapped
case with campaign handles is in excellent condition and the varnish has been cleansed from years of grime. There are four
pockets on the right side and only one end lens caps is present. Close-up showing the horizon mirror 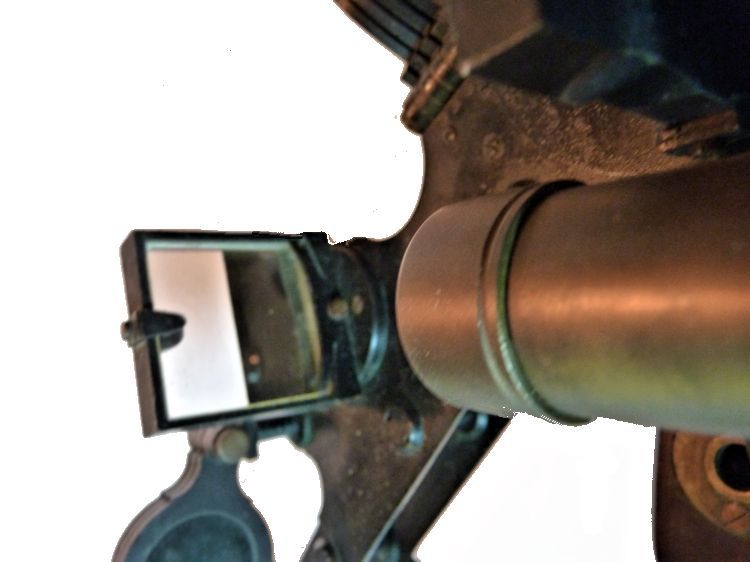 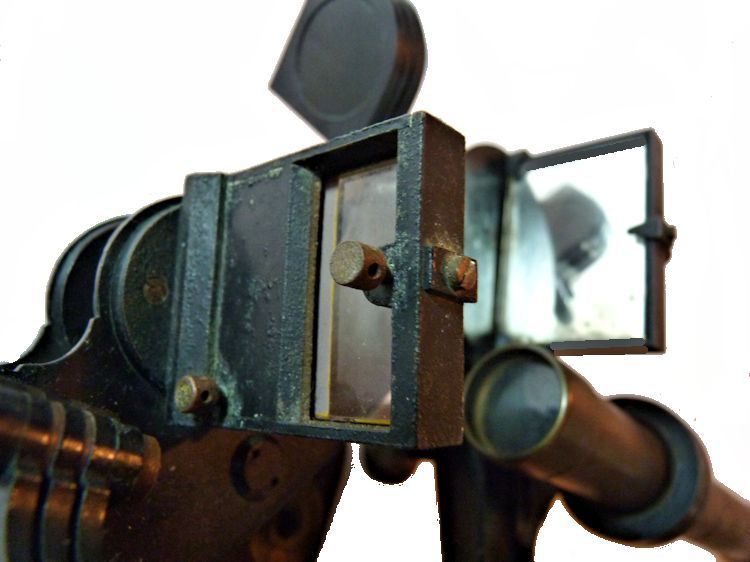 The index mirror is
also in very good condition  HISTORIC
BACKGROUND Edward Troughton, FRS (October 1753 –
12 June 1835)was a British instrument maker who was notable for making telescopes and other astronomical instruments.
Troughton was born at Corney, Cumberland. In 1779, after serving
an apprenticeship with his elder brother John, he became his partner and soon established himself as the top maker of navigational,
surveying and astronomical instruments in Brittan. In 1795 he delivered the Troughton Equatorial Telescope
to the Armagh Observatory, a 2 inch aperture refractor telescope mounted equatorially, and its first major instrument since
its founding in 1790 (It survived into the 21st century also).  He created the Groombridge Transit Circle in 1806, which
Stephen Groombridge used to compile his star cataloger.[3] He did not merely build instruments, but designed and invented
new ones such as his double frame instrument of 1788.
BRIEF
HISTORY OF THE HUGHES FAMILY: The Hughes family were originally clock makers in the East End of London who progressed
into supplying sextants and chronometers to ships coming into the River Thames. In 1712 Thomas
Hughes became a member of the Worshipful Company of Clock makers at the age of 26, and was elected as Master of the Worshipful
Company of Clock makers in 1742. His son, Thomas Hughes (junior), had his business at 25 New Bond Street, London, and was
elected as Master of the Worshipful Company of Clock makers in 1762. In 1781 William Hughes,
believed to be the son of Thomas Hughes Junior, was elected freeman of the Worshipful Company of Clock makers and sold a cabin
clock to captain Cook. Joseph Hughes, believed to be the son of William born in 1781, lived and worked at 16 Queen Street,
Ratcliffe. He was to become a well-known maker of quadrants and compasses. His son Henry Hughes was born in 1816.Henry Hughes & Son was founded in 1838 at 120, later 59, Fenchurch St. in
London, as an optician and maker of chronographic and scientific instruments. Henry died in 1879
and his son Alexander succeeded him as chairman. The firm was incorporated as Henry Hughes & Sons Ltd in 1903 and
in 1923, the company produced its first recording echo sounder. In 1935, a controlling interest in the company was acquired
by S. Smith & Son Ltd resulting in the development of marine and aircraft instruments. Following the London office’s
destruction in the Blitz of 1941, a collaboration was entered into with Kelvin, Bottomley & Baird Ltd, resulting in the
establishment of Marine Instruments Ltd. Following the formal amalgamation of Kelvin, Bottomley & Baird Ltd and Henry
Hughes & Sons Ltd in 1947 to form Kelvin & Hughes Ltd, Marine Instruments Ltd acted as regional agents in the UK for
Kelvin & Hughes Ltd who were essentially now a part of Smith’s Industries Ltd founded in 1944 as the successors of
S. Smith & Son Ltd. The well known “HUSUN”
trademark was in use starting in the 1920s.

This maker is is listed in “Sextants
at Greenwich”,”Sextants at Greenwich” by W.E.J. Mozer Bruyns, which catalogs the collection of the British
National Maritime Museum at Greenwich, England. 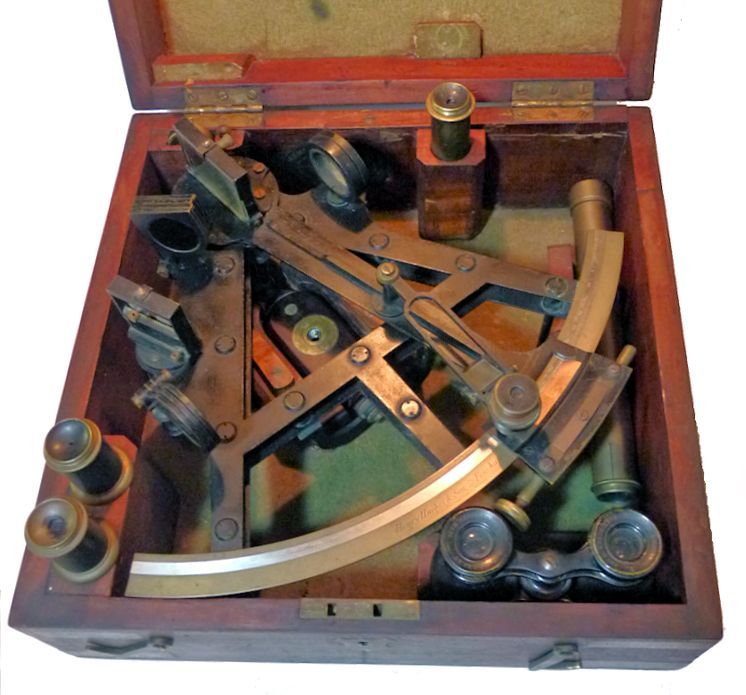 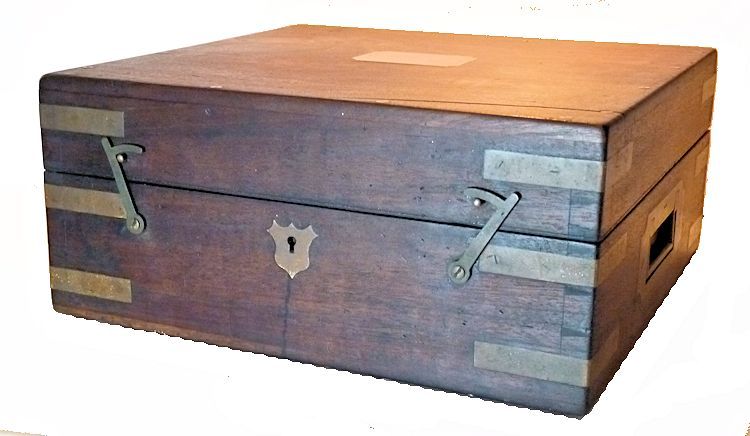 The brass strapped, campaign case has
a blank name plaque on top

CERTIFICATE: Is present, but
the date is illegible 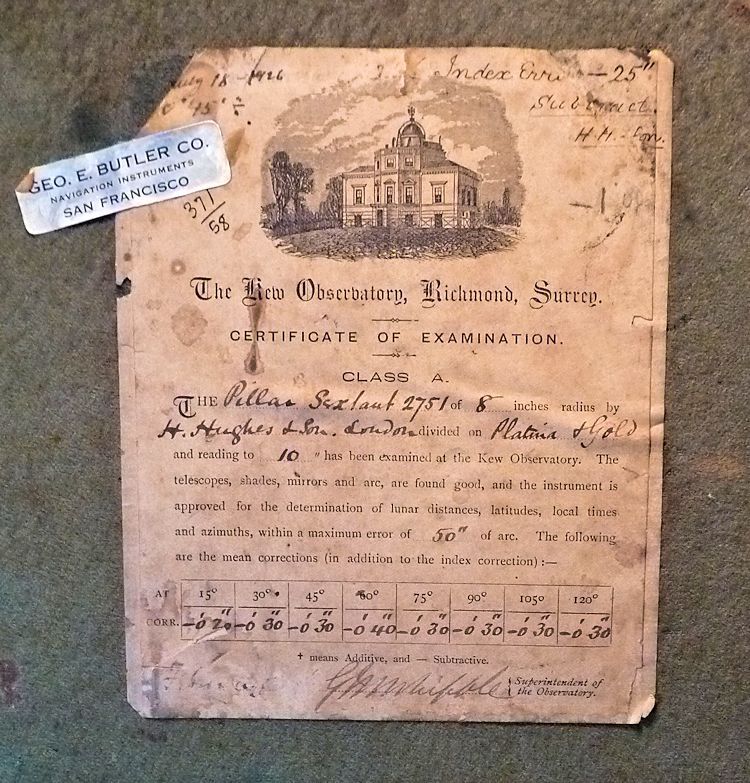