Marked N. S. Meyer New York / Defender
Length Overall 35 1/4” long Blade 30” long by 5/8” wide 1/4″ Thick LOA
36″ Fuller 16 1/2” x 1/2“  Sword and scabbard weigh 2 lbs. 1 3/4 oz. Presented is
an vintage M1852 unnamed naval officer’s sword that is one of the most beautiful edged weapons we’ve ever
seen and, worthy of our restoration efforts which included renewing the gold gilt wash on all the brass work.  The perfect blade sparkles with its brilliance having no imperfections to
its deeply etched and frosted design. The spine is even detailed with floral leafs two thirds its length,
and the two square knot hangers are carefully chiseled castings, both further evidence of high quality.

When acquired, the guard, pommel
and scabbard bands had varying amounts of their original gold wash remaining which was not in keeping with the perfect blade.
Our shop used a special process to renew the gold wash. The white pebbled grip has the look and feel of Shagreen, but
is made of high quality plastic that has realistic look of Shagreen. The 13 turn, ornate wire wrap gives the appearance
of three strands. The scabbard is also made of high grade plastic, but it has the feel of real leather. There is one small
wear mark on the reverse where the sword belt hardware rubs that supports this conclusion. Never before have we encountered
a sword made before 1930 that used synthetic materials which were hardly ever seen back then. In our opinion, its beauty and dazzling features should
overcome any objection. Plus the fact, that only an experienced person will ever notice them.

MARKINGS: The reverse ricasso
is marked with  N.S. Meyer Inc. New York with their DEFENDER Trade Mark above. This trade mark was not registered
until 1935 which is ten years after we believe this sword was made. On the obverse is the six pointed
Star of Damascus which should not be confused with the Star of David. It has the military required brass slug in the center
with a fleur dis lis over which is “Proved”. Meyer’s was a longtime
military dealer whose operations in Washington D.C. date back to 1868. The New York City operation was founded in 1906
by the founder’s son, Nathan and was described in its early advertising as a dealer in Army and Navy equipment. Meyer
like most merchants selling edged weapons didn’t make them. They are cutlers bought their blades from various sources,
having them marked with their brand names, and then fitted the hardware in various grades. Meyer was in business there from 1906 to 2000 when Vanguard Industries acquired the business
after the Meyer’s bankruptcy. 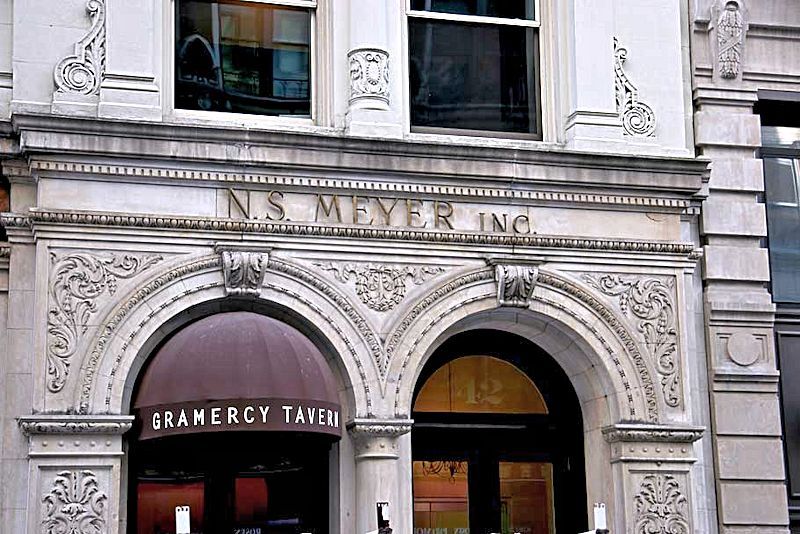 During the 1920s,
they were located at 103 5th Ave and in their last thirty years they were in the building pictured above on E. 20th St.  DATING THE
SWORD: This sword was made prior to 1930 because Section 304 of the Tariff Act of 1930 as amended (19 U.S.C. § 1304)
requires most items, to bear labels informing the ultimate purchaser of their country of origin. No such mark is on this sword.
That begs to ask why the company waited until 1935 to register the Defender trade mark. That might be sheer oversight
which can easily be explained because a trade mark is also perfected by its 1st date of and continuing use. 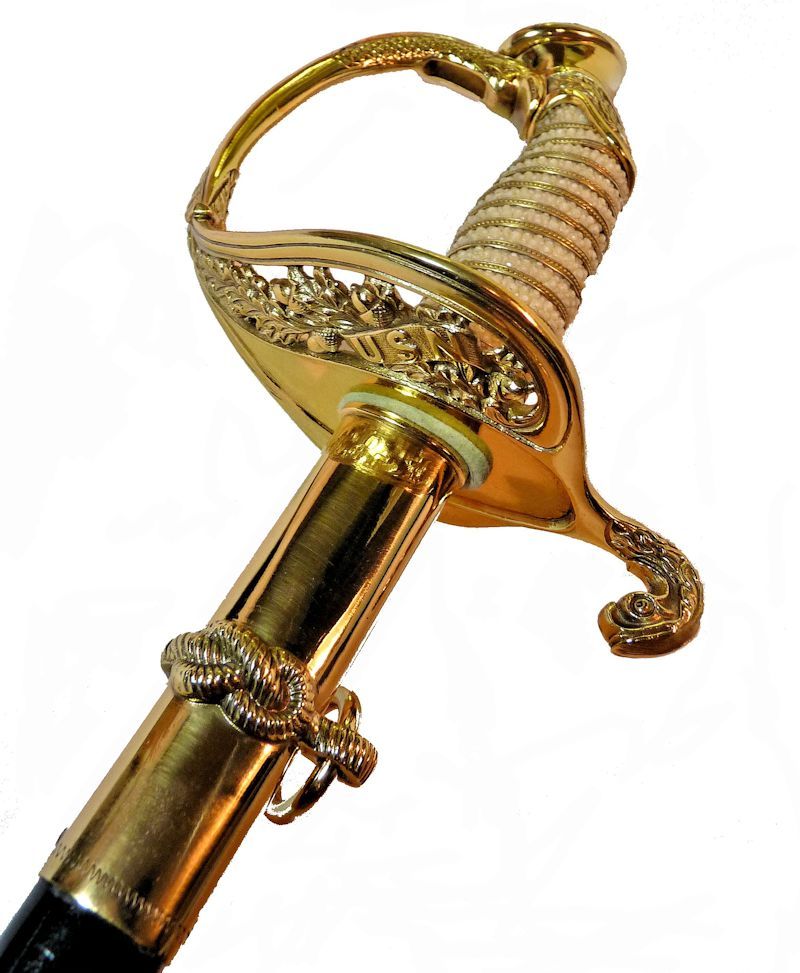 It is known
that in regard to swords, that the country of origin markings on a European sword blade date back to after 1892 when
when marking a blade’s origin was mandated by law. Similarly, it is said that Meyer bought their blades for military
swords from Carl Eickhorn  in Solingen, Germany. In 1939,
due to the increase in hostilities, Meyer terminated their dealings with Eickhorn and began buying their blades
from Lilley-Ames. OUR CONCLUSION is sword was
clearly made before 1930 and and after 1892 so that it must be American made, and in our professional opinion, is
the work of Ames or Lilley-Ames after 1920. The left facing eagle on the pommel cap supports this conclusion. 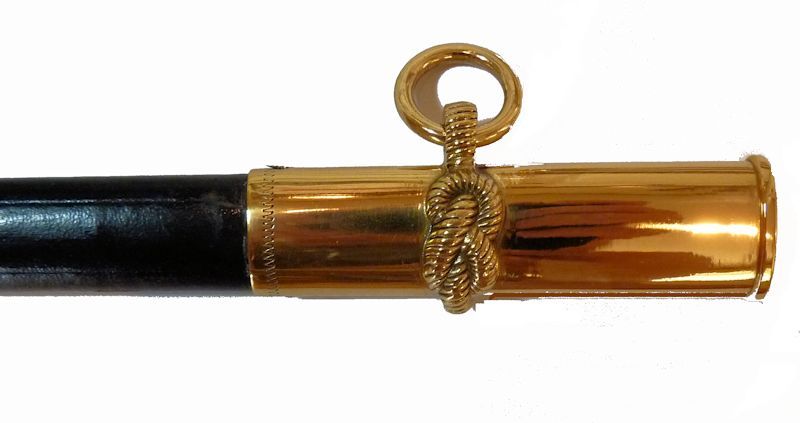 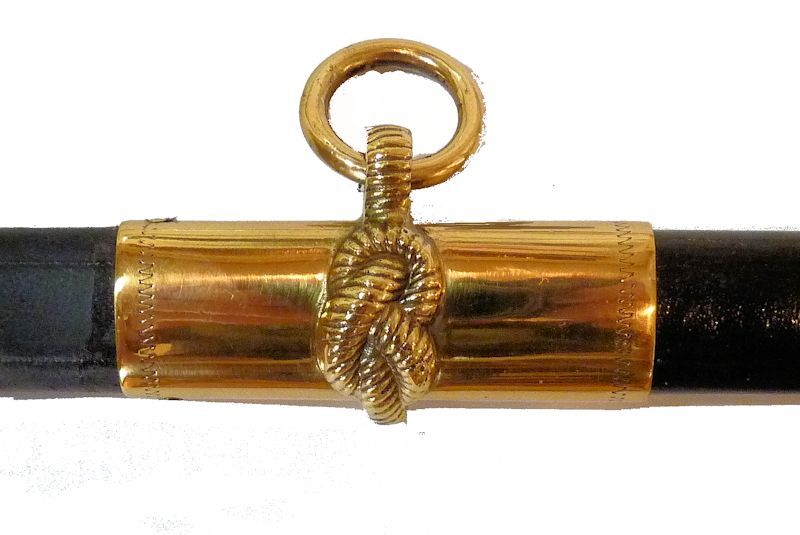 High quality gilded
brass work on the scabbard The dolphin or sea serpent ornament
on the drag is mounted with its head on the side away from the hangers per the official design while the eagle on the
pommel faces left surrounded by 13 stars. Thirteen stars is what was called for by the official 1852
blade design. This sword’s blade has the same 5/8″
width as that of currently made contemporary M 1852 swords 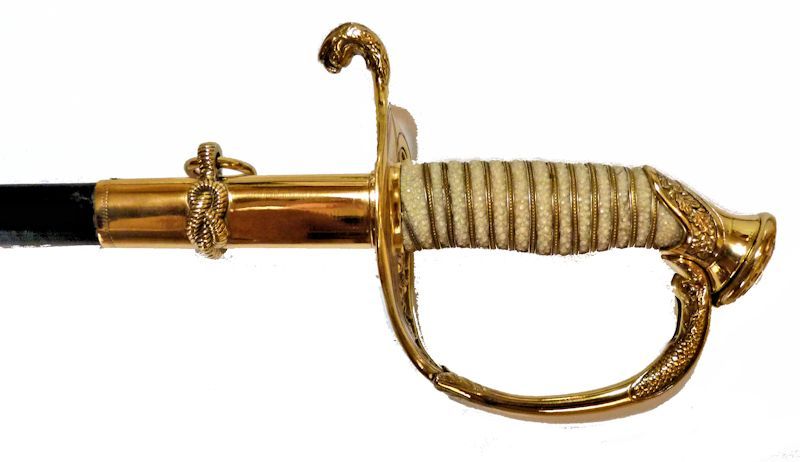 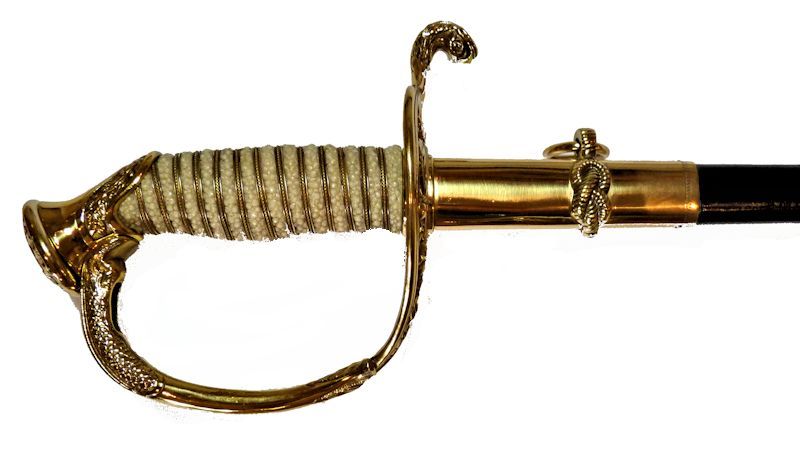 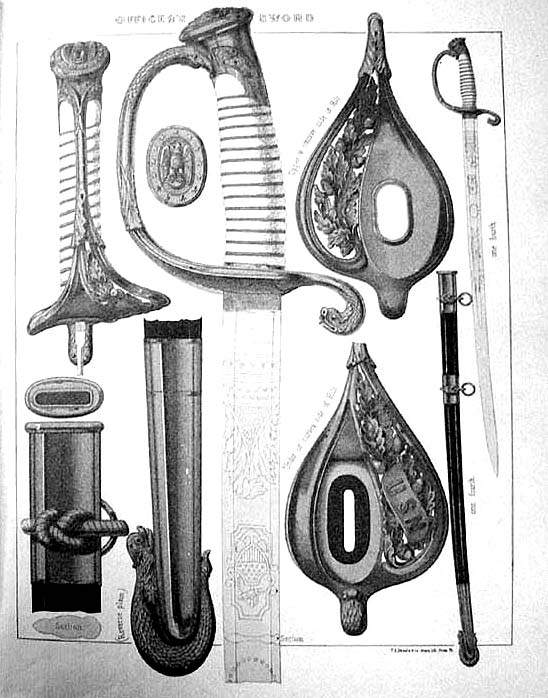 The only difference between the original Model 1852 sword design
shown on the left, and that authorized today, is that today, materials such as plastic substitute for fish and ray skin, and
lower quality metalwork is being used. Not so with this sword that conforms with the original specifications except that the
blade was decreased in width as follows:* From 1 1/8 inches to about 1 inch after 1872 * To about 3/4 inch in the later 19th Century,* To 5/8 inch in today’s Navy. The regulation of 1852 had the eagle on the pommel facing right
when viewed from behind. The use of the officer’s sword was suspended on 15 October 1942 and was not authorized officially
again until 1954. Source Naval Historical and Heritage Command.