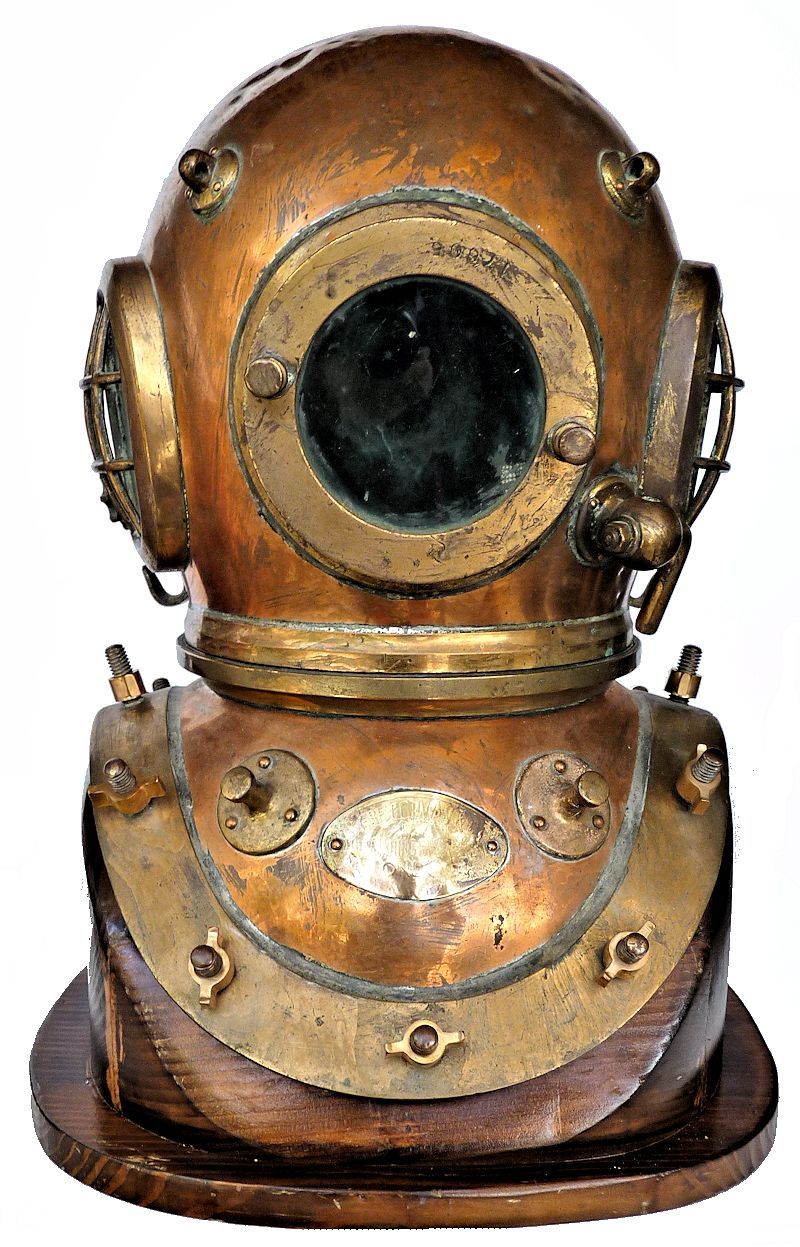 In
1840, August Siebe was the inventor of the deep sea diving helmet as we know it today.  His helmets are prized worldwide
by collectors and divers with this helmet being a very good example.

TOTAL WEIGHT 38 1/2 lbs  BONNET 22 lbs     BREAST PLATE 16 1/2 lbs
STA ND NOT INCLUDED
Presented is
a 12 bolt, 3 light Siebe.Gorman helmet, dating from the 1950’s, that has its nuts, but no brails. It was polished and
lacqured some years ago and much of this coating remains The helmet has a golden patina on
the bonnet and breast plate both of which have the same serial numbers.  The air vents are all intact.
The spit cock handle, front door, and wing nuts turn easily.  Except for numerous small dents which are evidence
of lots of use, and a dent surrounding the air supply elbow the helmet is in very good condition. Like
all used diving gear, this is being sold for DISPLAY ONLY. It should not be dived without having passed inspection by a certified
dive shop. 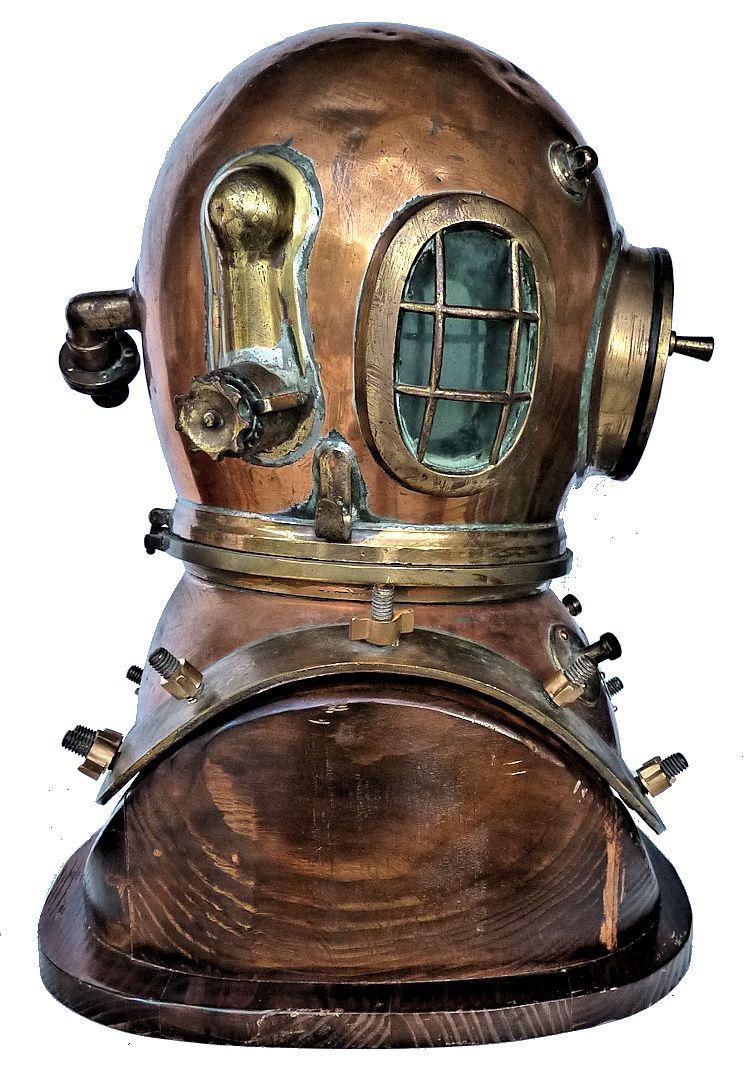 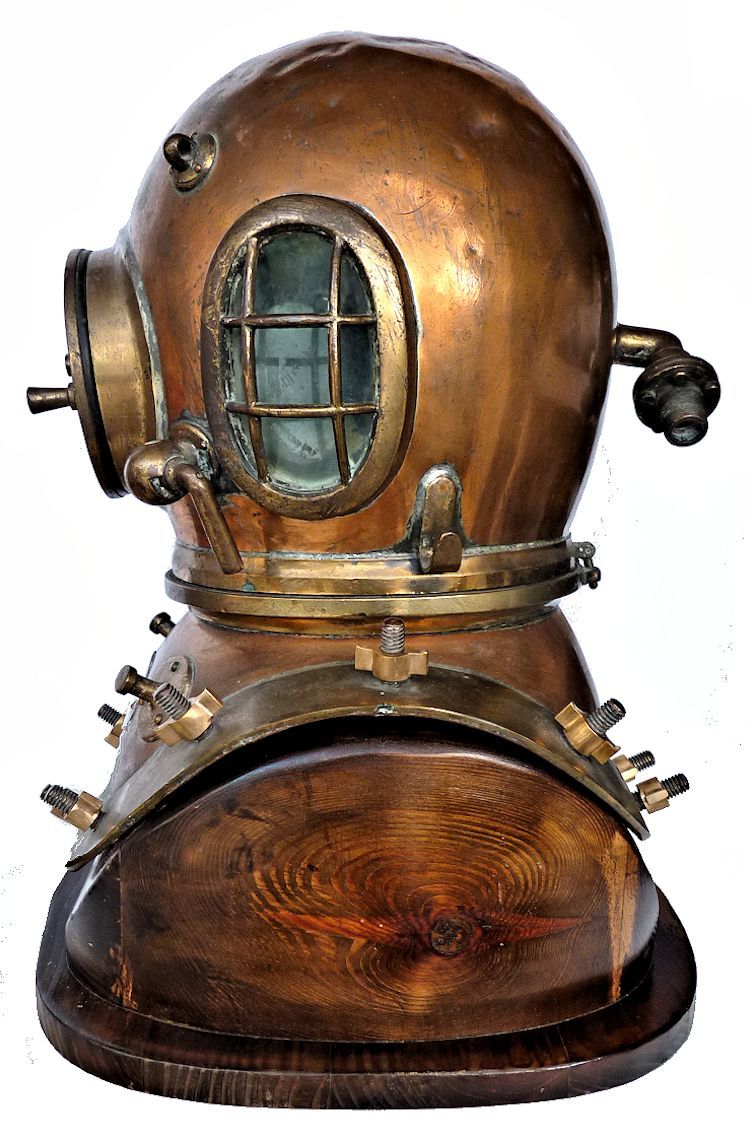 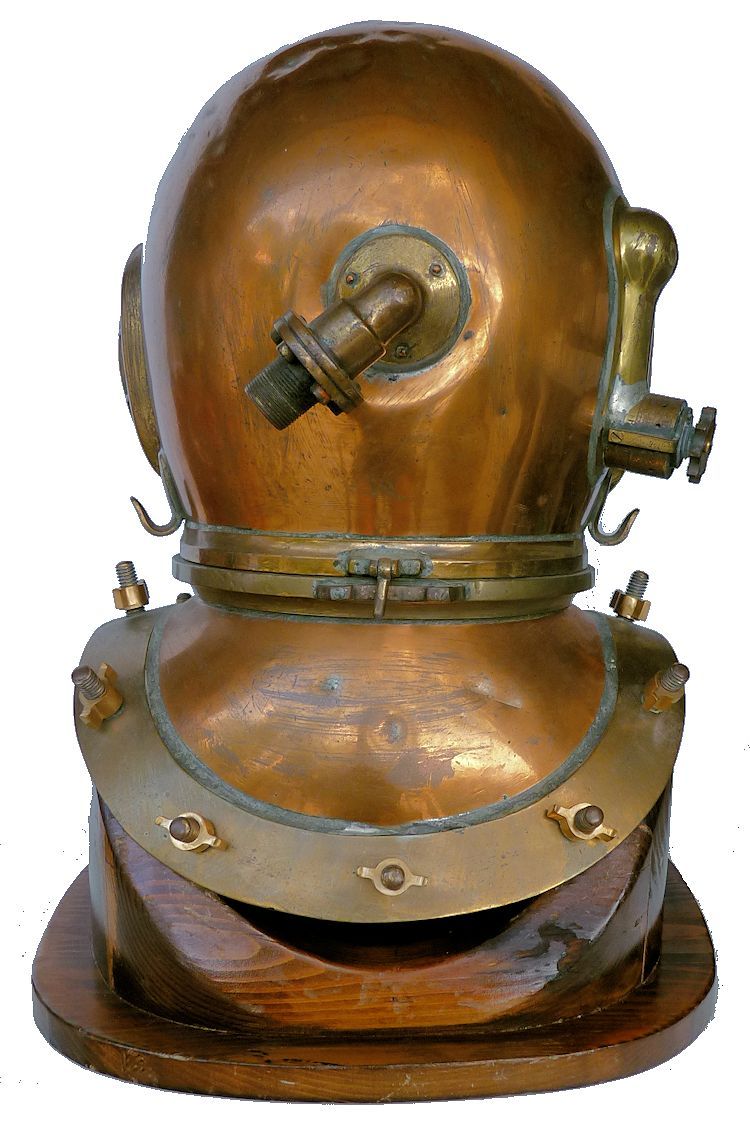 PROVENANCE:
Purchased in the normal course of business

MAKER’S BRIEF HISTORY: Augustus Siebe the German-born founder of the firm which bears his name (1788-1872) is considered
“the father of diving”. Sib’s ‘closed’ diving helmet, first produced in 1840, allowed divers to
dive safely to greater depths than ever before. Attached to a rubber suit, it became the ‘Standard Dress’ that revolutionized
diving and made the underwater worker an essential part of both salvage operations and civil engineering. Many of the great
building projects of the Victorian era – bridges, tunnels and lighthouses still in use today – could not have been built without
divers. Sib’s
design was so successful that it remained in use essentially unchanged, by the Royal Navy until 1989. Born in Saxony in 1788
and trained as a metalworker in Berlin, Siebe served in the Prussian army against Napoleon before emigrating to London in
1816. He moved into 5, Denmark Street, a four-story house dating from the 1680s, in 1830. Located in St Giles-in-the-Fields,
an area which has had a long-standing connection with the metal-working trades, the property served both as his home and his
commercial premises. Continued below. 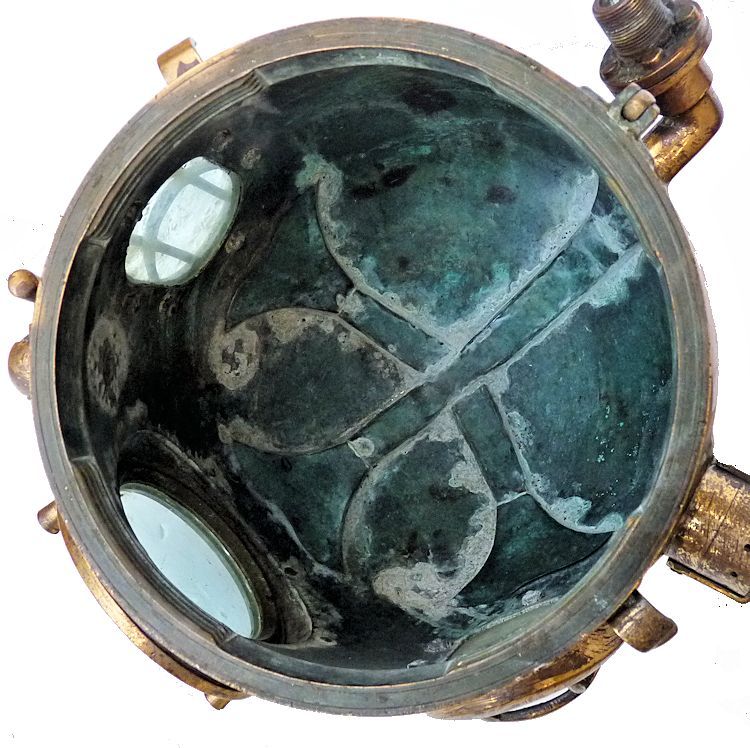 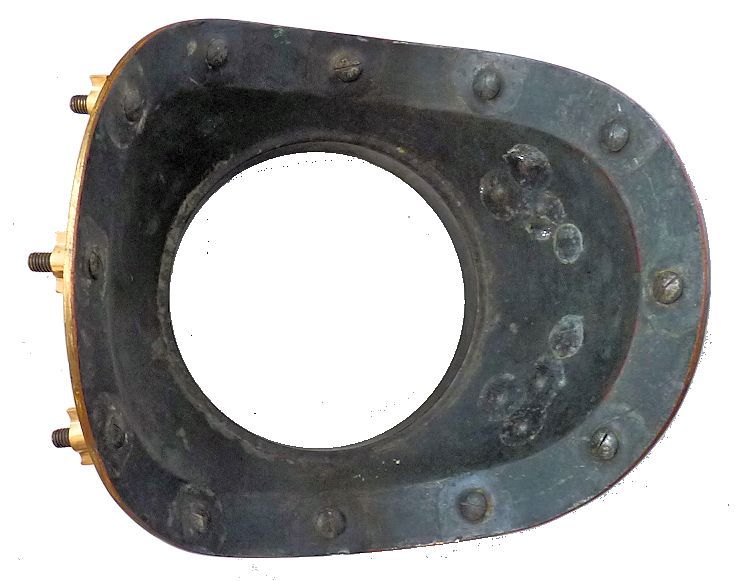 Inside
of helmet showing vents over bottom of breast plate

Siebe manufactured his first ‘closed’ diving helmet in 1840. Previously, divers had relied on ‘open’ helmets from
which spent air had to escape beneath the rim of the helmet or below the hem of the diver’s rubber jacket, increasing
the risk of drowning. Siebe’s ‘closed’ helmet was bolted onto a modified diving suit based on the open helmet
dress, with divers receiving air from a pump on the surface. The suit was watertight and thus safer than earlier types of
diving dress. Together with special pumps designed by Siebe, it made diving to a depth of about 25 metres possible. Siebe
perfected the design of his new diving suit during the salvage operations carried out between 1840 and 1843 on the warship
HMS Royal George, sunk in 1782. Following this practical experience of salvage work, his company became the known source
for the safest and best of diving systems. Siebe’s
other inventions include a dial weighing machine, a paper-making machine, and a rotary water pump. In 1850, he manufactured
one of the first ever ice-making machines. Siebe won numerous medals at the 1851 Great Exhibition and the 1855 Paris Exhibition,
and was elected an Associate of the Institution of Civil Engineers in 1856. Siebe
died at 5, Denmark St in 1872. His obituary described him as “retiring, kind of heart and honourable in all his dealings.”
The firm went out-of-business in 1999.