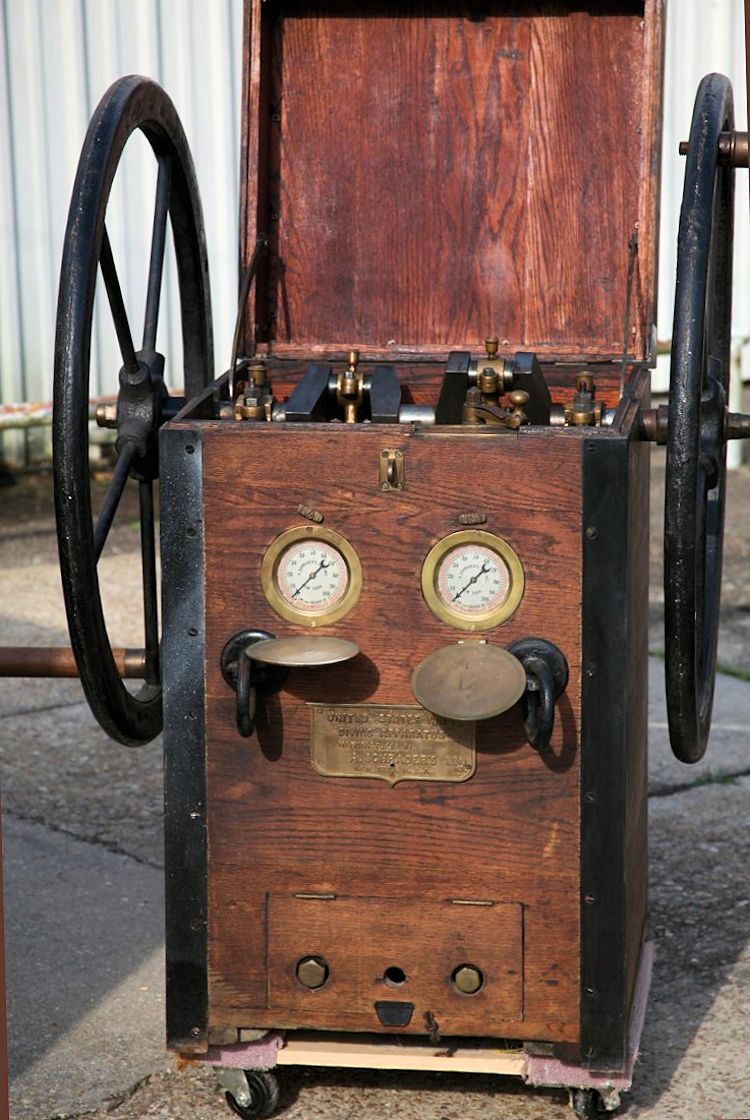 Presented is a rare example of a deep water, two diver air pump from a design dating back to 1898, that was made by A. Schrader’s
Son, New York. It is in pristine working condition. This
Air Pump design was the standard for the US Navy for many years. Capable of handling 2 divers working simultaneously
down to 100 ft., or one diver only in very deep water. It has 2 cylinders, double action, with Two Patent indicating
gauges to denote the air pressure and depth of each diver. With a copper water cistern, 2 flywheels, in a solid Ash Chest,
with iron rings for lashing down the pump or transporting. Unit
has the original wrench for removing the crank handles and brass securing nuts for the fly wheels. These wrenches are
almost impossible to find, today.

PROVENANCE:
From the private collection of a Master commercial diver with 47 years experience in the water and as a marine consultant.
This pump was found in a
warehouse in the Great Lakes area where it had been sitting for the past 40 years.  The pump is being sold for display only and should be
sent to a dive shop for re certification if intended for use.

CONDITION:
The pump had a thick layer of marine soot and oil covering all the internal parts. It smelled of hydrocarbons
so badly that it could not be kept inside. It was professionally cleaned by Nautilus Worxs, Inc. of Houston, TX. Each and
every part was dismantled and hand washed with mild soap and water to preserve the beautiful patina found under the black
layer of soot and oil. It now is an easy to crank unit. One person can crank the pump and 4 revolutions
of the handle will bring it to full working pressure.

FEATURES: This Schrader pump, two diver air pump was designed in
1898, and is housed in a hardwood chest with iron tie down rings, and two large iron flywheels. It
is fully restored and fitted with two flywheels, and iron angles at all four corners. It features a twin
double acting cylinder with valves that could be serviced without removing the pump from its chest. There is a water jacket
around the cylinder to cool the air that was pumped to the diver. A special reservoir on the lower beam acts as an air chamber
collecting surplus oil and cause the air to flow steadily and remain free of contaminants. Two large gauges on the front indicate
air pressure and the depth of water where the diver is working. HISTORY
OF SCHRADER DIVING: Schrader is one of the oldest names in U.S. diving, second only to Morse. The founder, August
Schrader was a creative and inventive German immigrant who originally set up a shop dealing in rubber products in New
York City, NY  in 1839, only a few years after A.J. Morse set up shop in
Boston In
1845 he began supplying fittings and valves for rubber products made by the Goodyear Brothers. Schrader was also a maker
of daguerreotype apparatus. His original shop was at 115 John Street Manhattan,  NY Shortly thereafter he went into partnership with Christian Baecher.
Christian was a brass turner and finisher which provided a foundation for what followed. The two partners, having watched divers at work at a nearby New
York Harbor jetty, decided to improve the diving helmets in use at the time. In 1849, with the help of Baecher,
he created a new copper helmet. Later his interest in diving led to him to design an air pump.Around
1890, August Schrader saw the need for a bicycle tire valve. By 1891, he produced the Schrader valve. The Schrader valve was
his most popular invention, and is still used today. In
1917, the United States Bureau of Construction & Repair introduced the MK V helmet and dress, which then became the standard
for US Navy diving until the introduction of the MK 12 in the late nineteen seventies. Schrader and Morse Diving were
the two original suppliers.A great addition to a dive collection
or, put back in service after inspection by a certified dive shop. 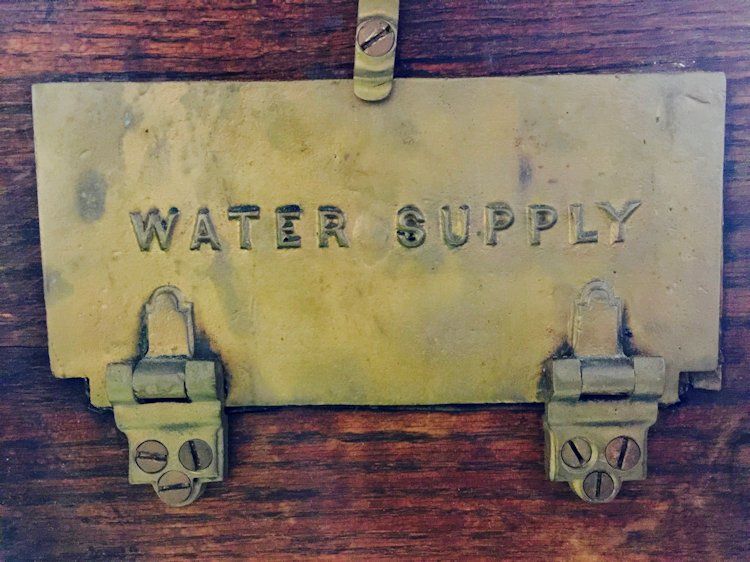