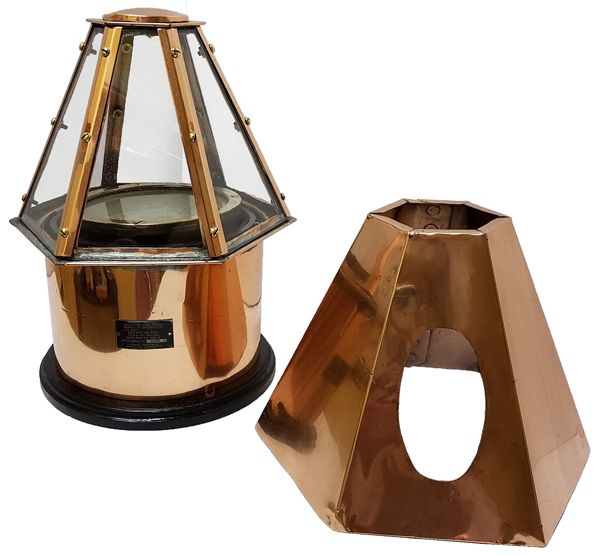 This unusual skylight or cathedral binnacle makes a dramatic statement. It is a perfect gift or would serve as an interesting addition to any nautical decor
Presented is a very unusual Skylight style binnacle, with a E.S. Ritchie & Sons compass. We have no idea who made this compass housing, but we suspect it was a private individual. The compass is by Ritchie as noted on the compass housing, with the card noted as sold by Chas. C. Hutchinson, Boston, which we assume was a dealer in nautical equipment. The label on the housing bears no resemblance to the compass or housing. Its for an aviation compass (which this is not) by Bendix for the Navy. We assume it was put on the binnacle housing for effect or aesthetics.

Condition The binnacle has been polished and lacquered for display. One of the glass panels has a crack, but two additional glass panels will be included with the binnacle as replacements. The compass is operating properly.

As is, we think this unique binnacle has a pleasing appearance. It would not be recommended for use at sea. 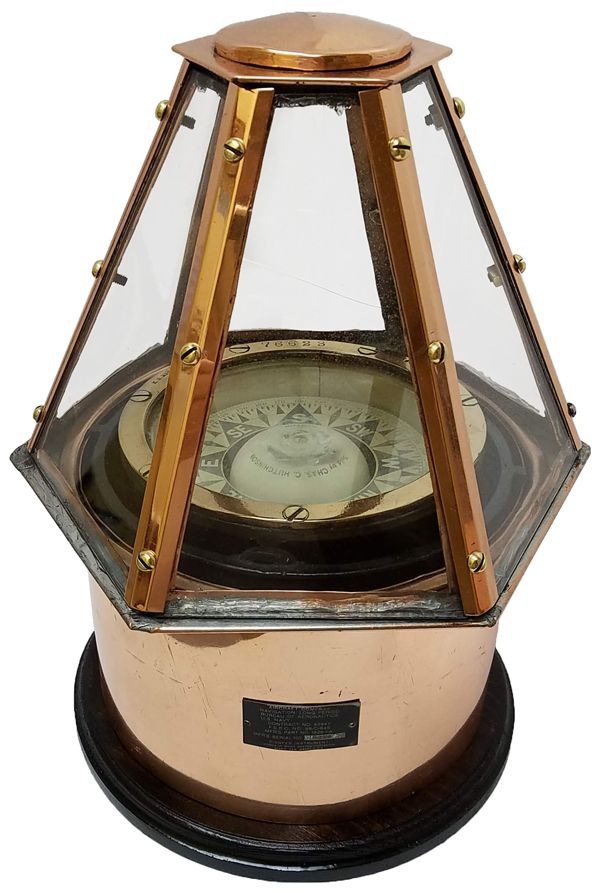 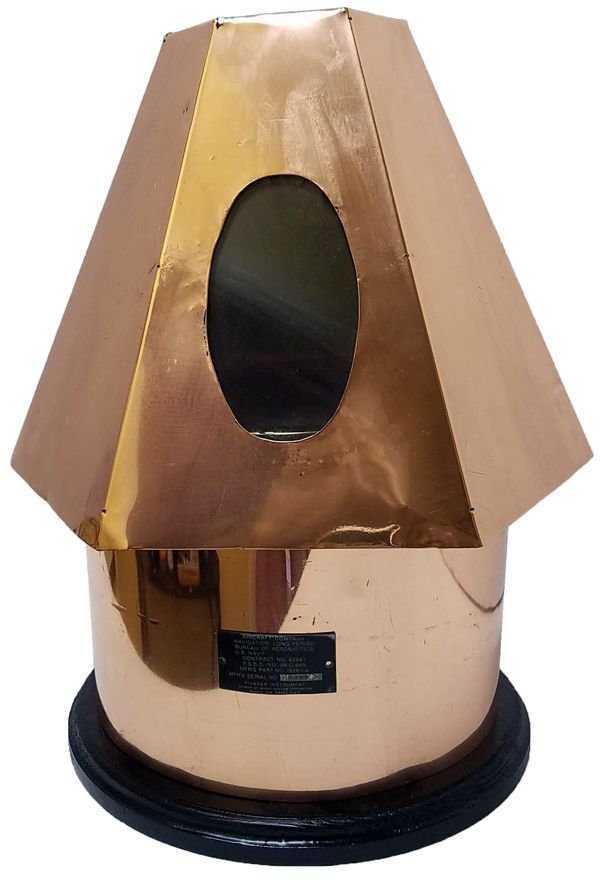 THE DRY CARD COMPASS The fully gimbaled antique compass is of a Turn of the Century design. It measures 5 1/4 in diameter and is fitted with a 4 ½” card. Stamped on the bezel is Serial Number 76623 and Ritchie & Sons, Boston.The gimbal sits in two indentations on an inner copper housing. It would not be recommended that this unique binnacle be used at sea.

The subdivisions are in Cardinal Points, N.S,E,W, and quarter points, NE,SE,SW,NW, then 1/2 points, 1/8 points and finally 1/16 points. There are 32 points on the compass card, each being 11 1/4 degrees. The outer circle is graduated in degrees from 0 to 350 with the north pointer as an ornate Fleur des Lis with the maker’s name and Boston and U.S. It appears to be operating correctly. 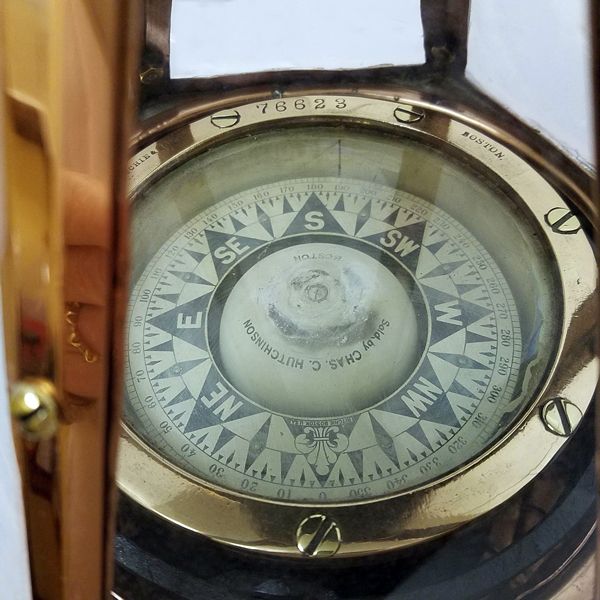 Compass is in Good Condition 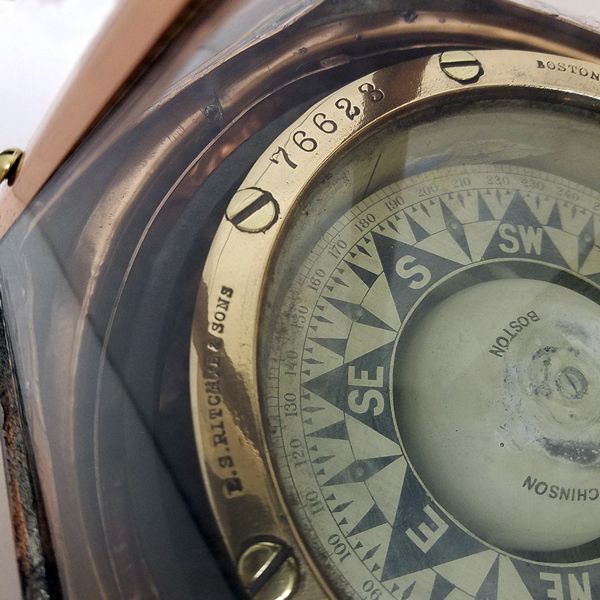 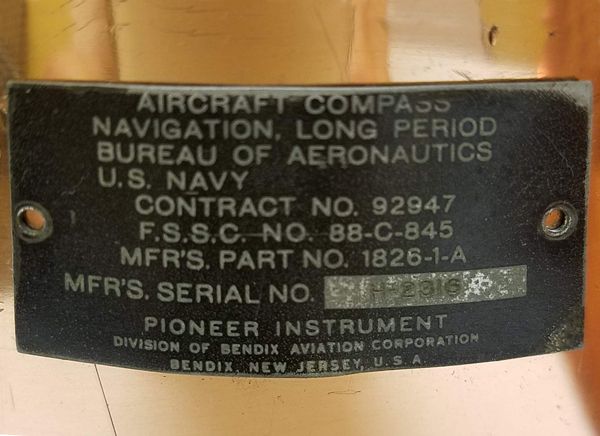 Close-up of Tag
E.S. RITCHIE, BOSTON: In 1850 physicist Edward S. Ritchie began developing the first U.S. manufactured marine compass. He had received a contract to repair foreign-made compasses from the Boston Naval Shipyard, and he soon realized most of the problems he encountered could be eliminated. So when the US Naval Observatory put out a call for American Manufactured navigational instruments in 1861 it was no surprise who they contacted first.
Ritchie completed and sent samples of his work (including the first ever liquid filled compass) in June of 1861 and by August he received an order from the US Navy for 26 compasses, 10 of which were liquid filled. At this time Ritchie began selling compasses under the name E.S. Ritchie & Co., which was later changed to E.S. Ritchie & Sons in 1867. To this day E.S. Ritchie & Sons continues to produce marine navigation instruments. A model of Ritchie’s first liquid filled compass is on display today in the Museum of Science in London, England; the only foreign product so honored. In 1951 the company was purchased by Marine Compass Company. Louis A. Sherman founded the Marine Compass Company in 1910 and concentrated on producing smaller instruments for commercial and fishing vessels as well as the emerging yachting markets. The two companies consolidated all operations under the name E.S. Ritchie and Sons and is still owned by the Sherman Family.