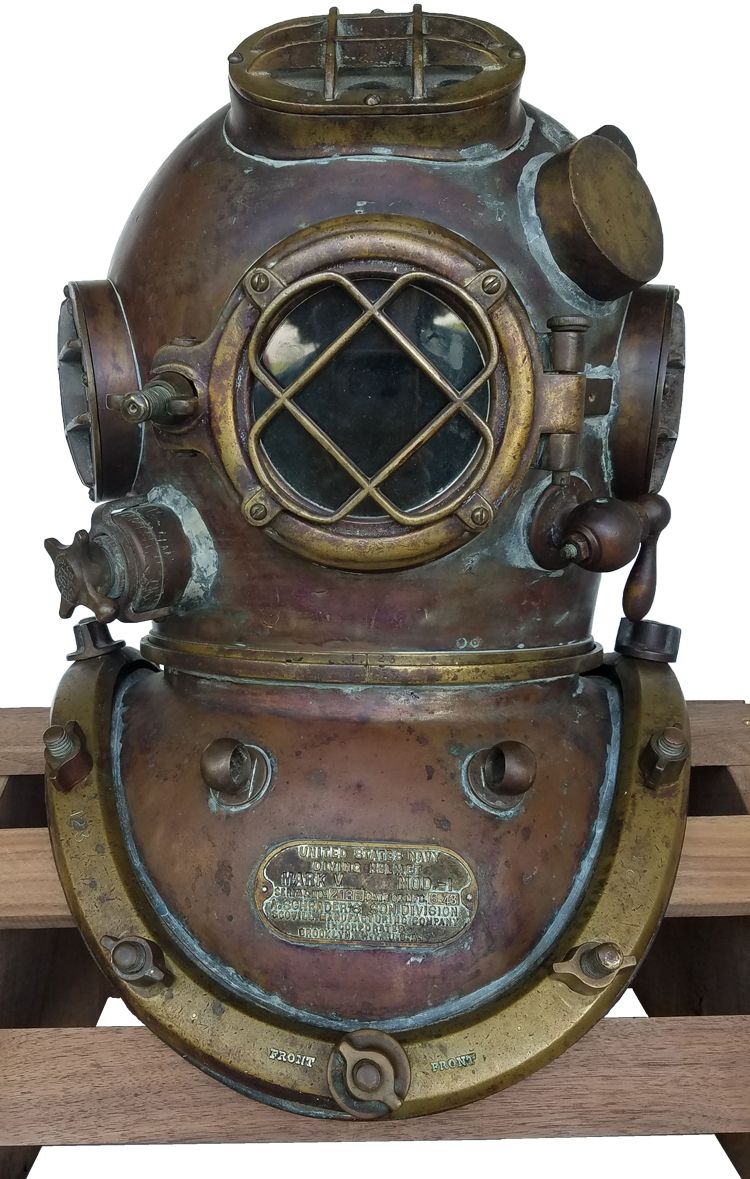 Presented is a fine 12 bolt, 4 light U.S. Navy MK V dive helmet made by Schrader in 1943. The owner of the helmet, who recently passed away, was a lifelong career diver with extensive experience working all over the world and frequently with the US Navy. He is mentioned twice in Capt. C.A. Bartholomew’s book, “Mud, Muscle, and Miracles”, working with Murphy-Pacific on the salvage of the Sidney E Smith ore carrier on the St. Claire river, 1972, and with Tracor Marine supervising the salvage operation in 1982 of numerous barges that broke loose on the Arkansas River after an extensive flood. We are able to include a number of pictures and memorabilia with this helmet.

HELMET & MARKINGS:  Authentic 12 bolt, 4 light Schrader Navy MK V dated June 1943 with serial number 213B on the maker’s tag. The  numbers on both top and bottom neck rings and all brailes are 123. There is the Navy Inspectors mark of a “U anchor S” on the top of the speaker housing’s knuckle. 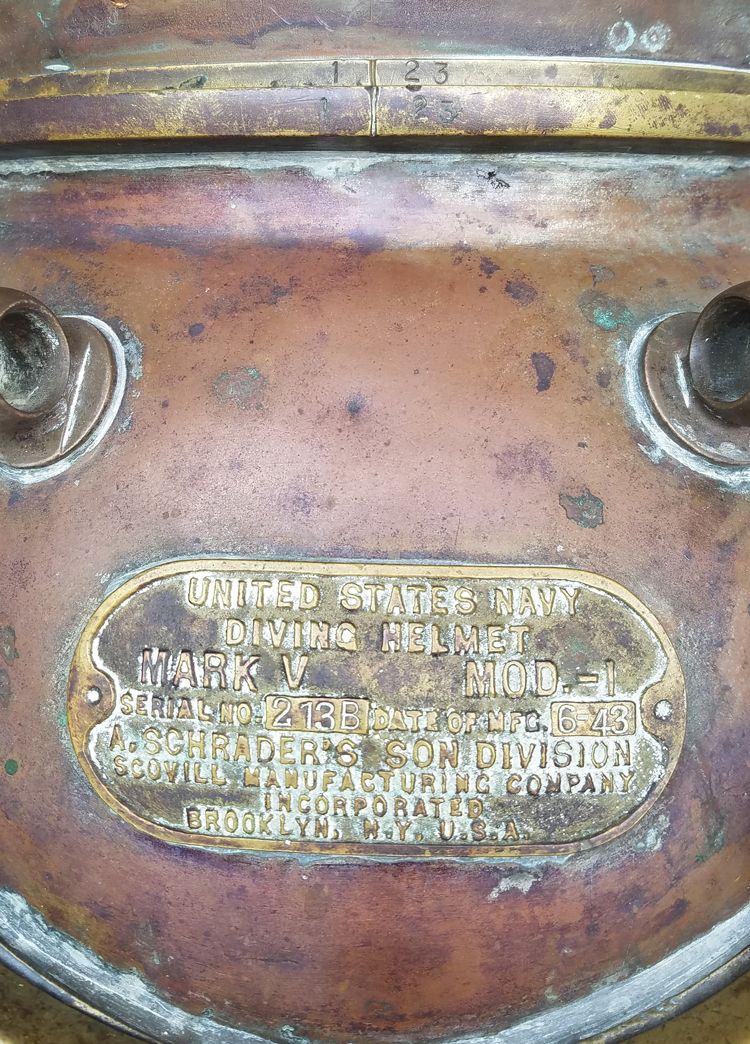 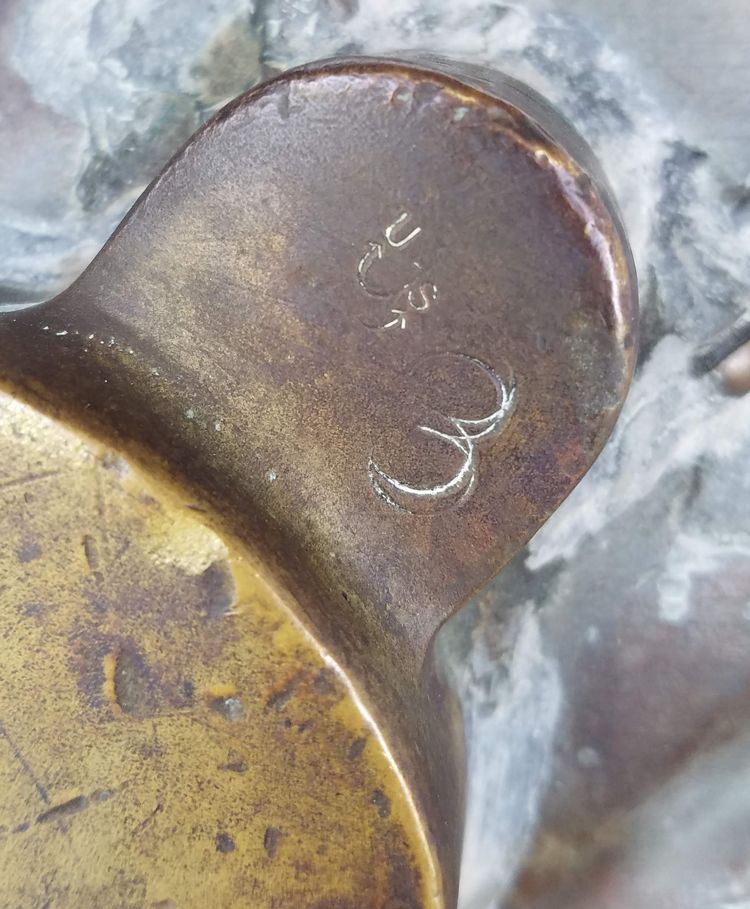 Navy Inspector’s Mark
CONDITION:
The helmet has seen considerable use in its 77 year life. There are numerous small and a few larger dents and abrasions all over the bonnet which are to be expected. It has a very nice patina with all of the tinning worn off. The air vents are all intact. The right side chin relief valve, spit cock handle, front door wing nut, all turn easily. The speaker housing is empty. A check valve is fitted, and the comm elbow does not have a nut. Like all used diving gear, this is being sold for DISPLAY ONLY. It should not be dived without having passed inspection by a certified dive shop. 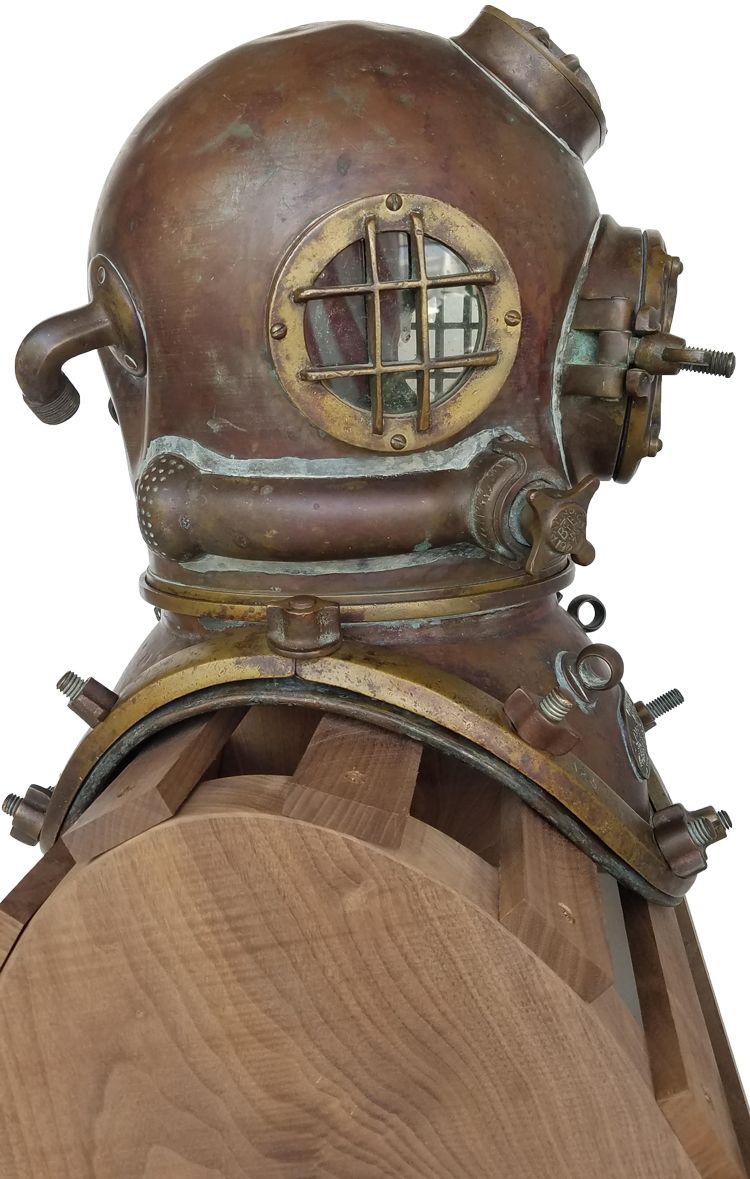 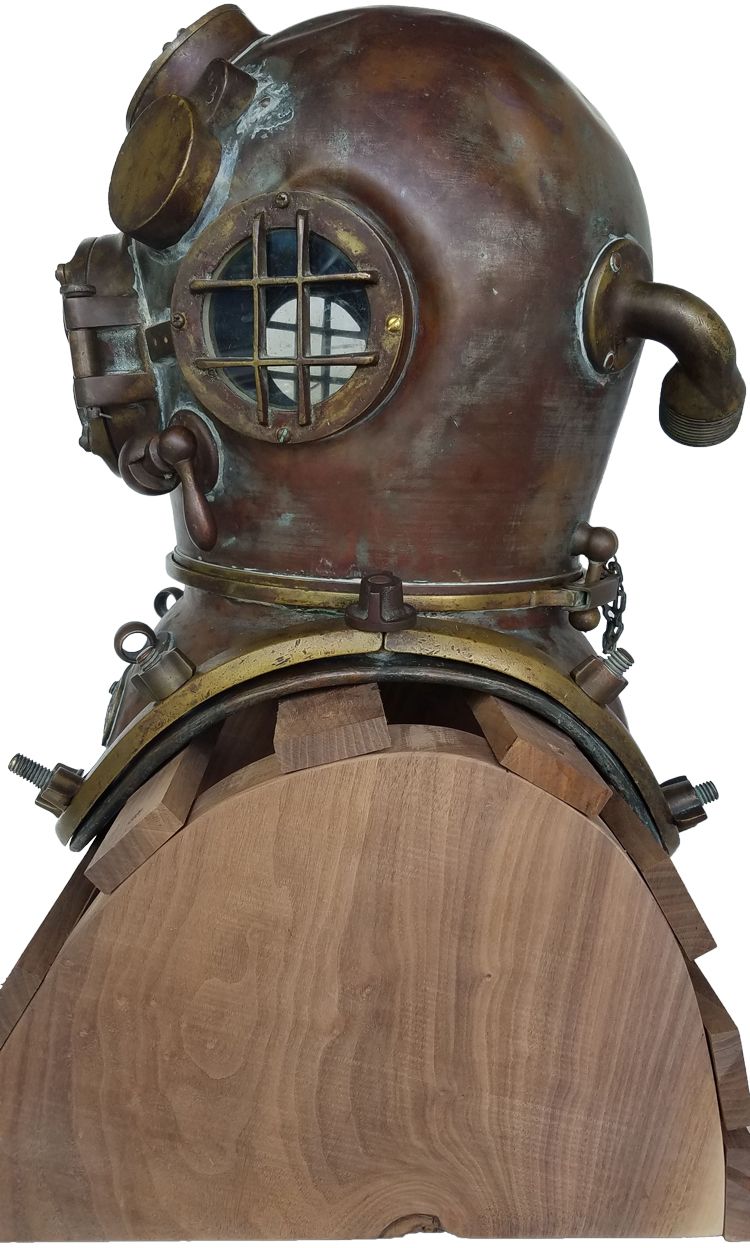 Left and Right side of the helmet. 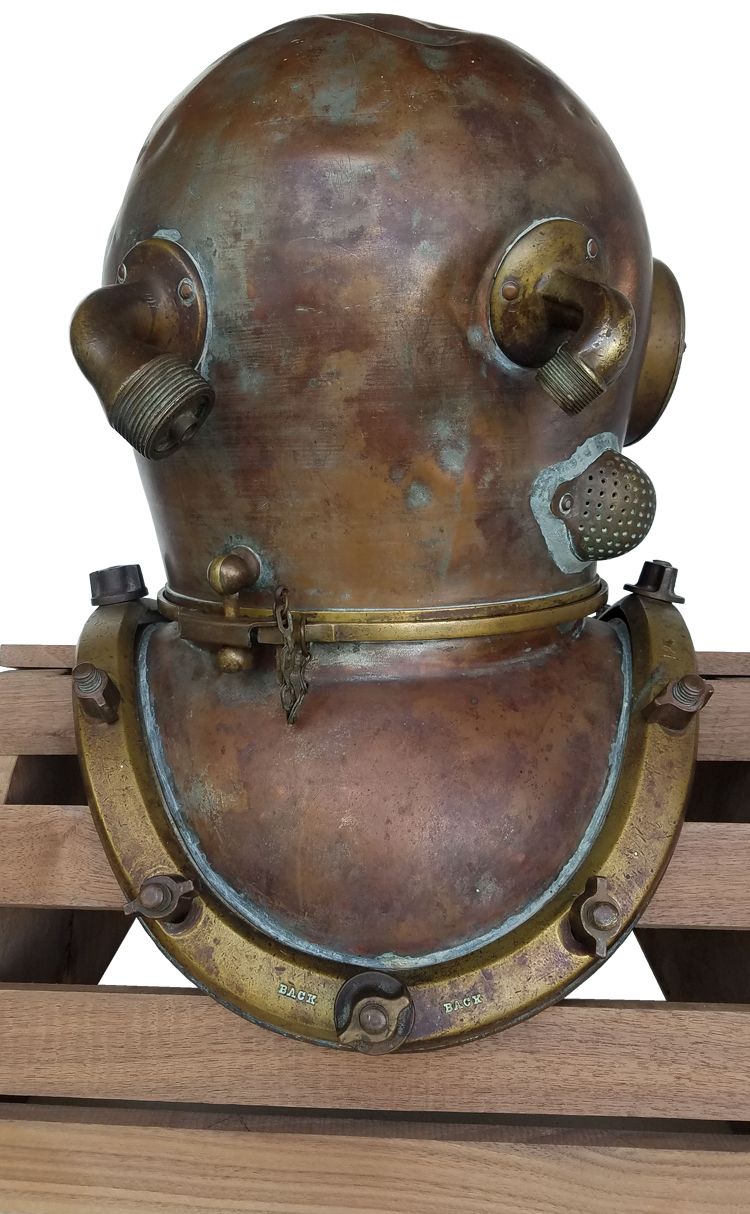 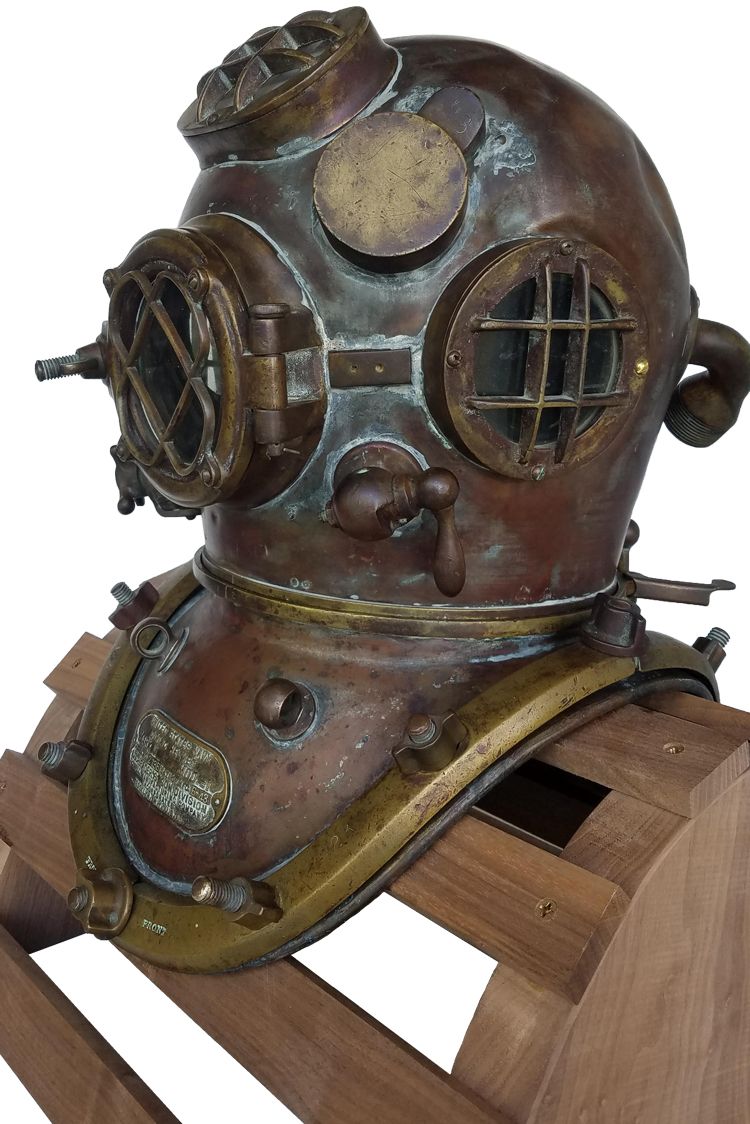 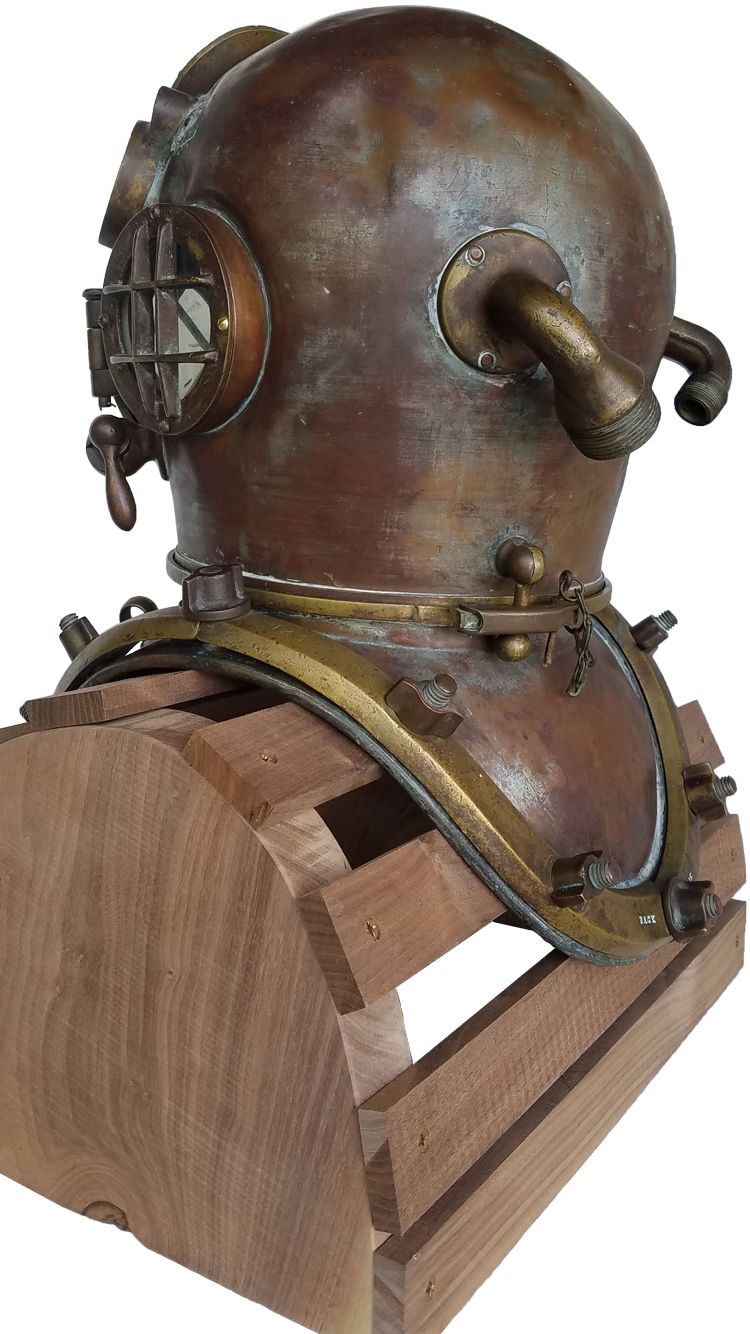 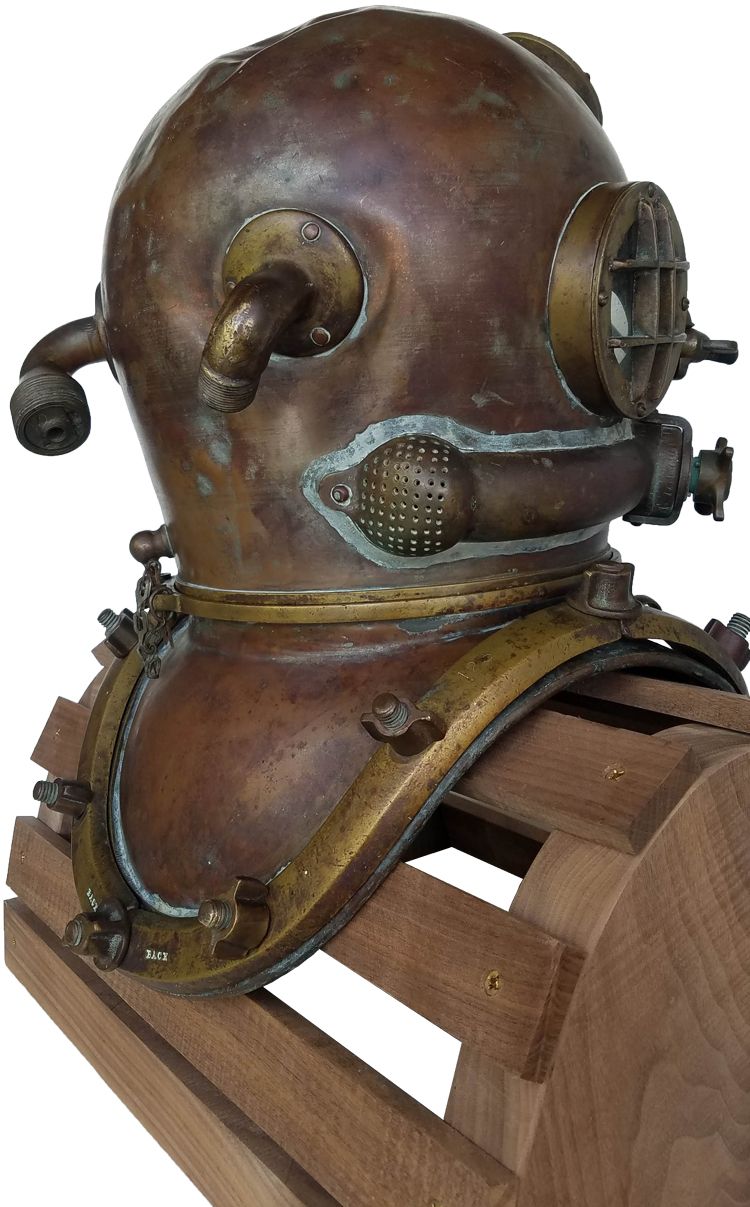 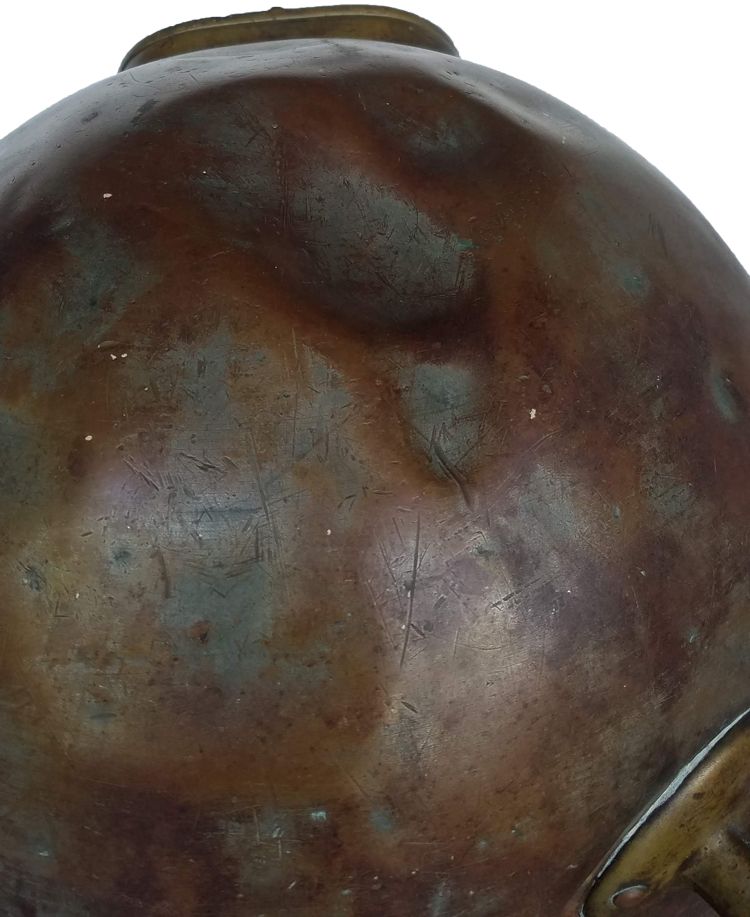 Showing Dent in Top Back 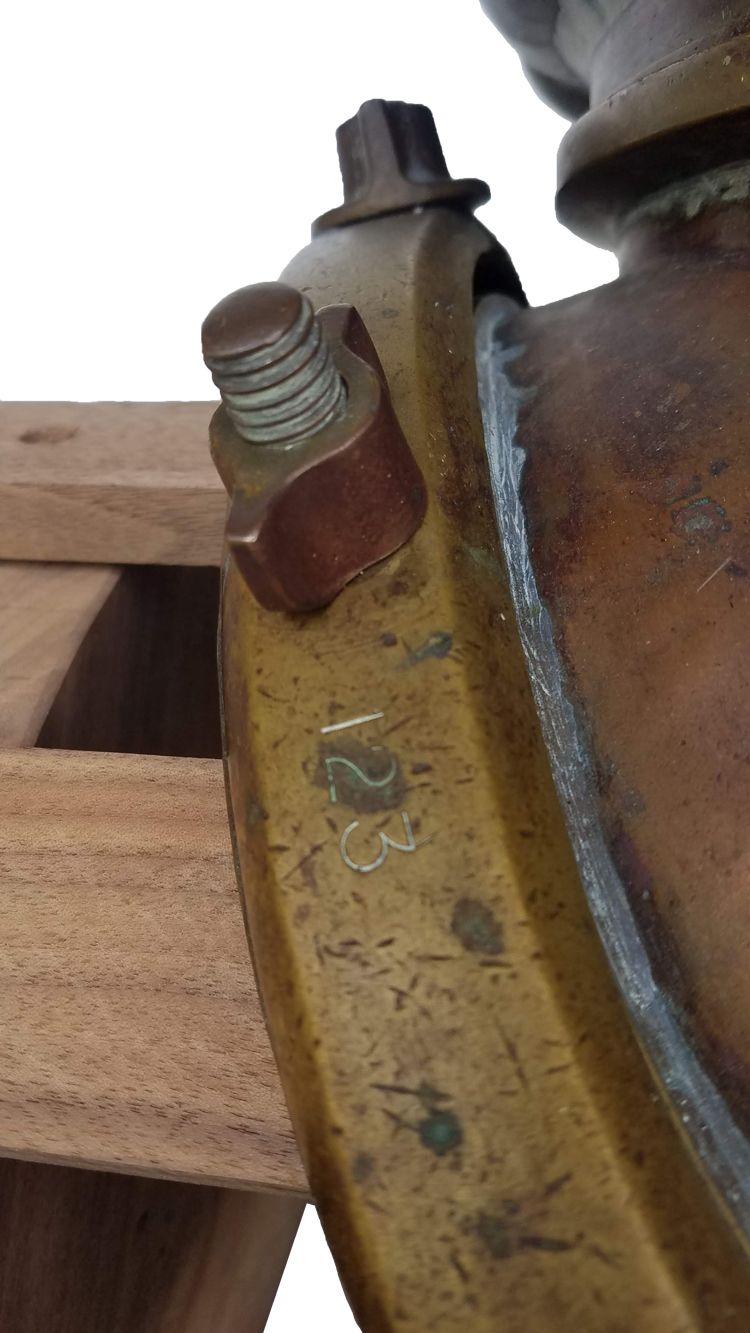 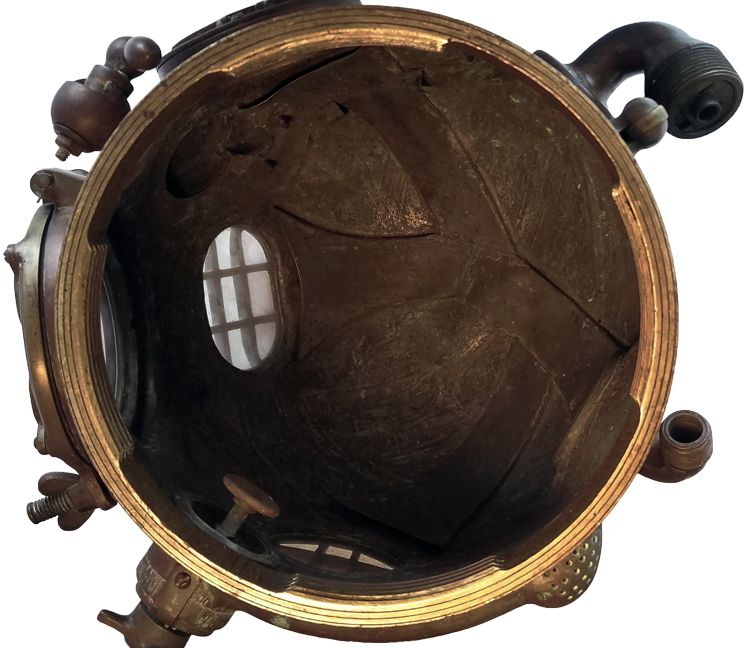 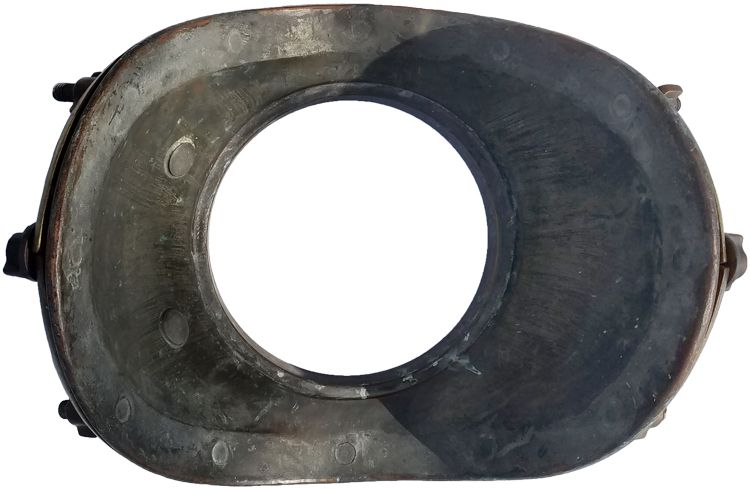 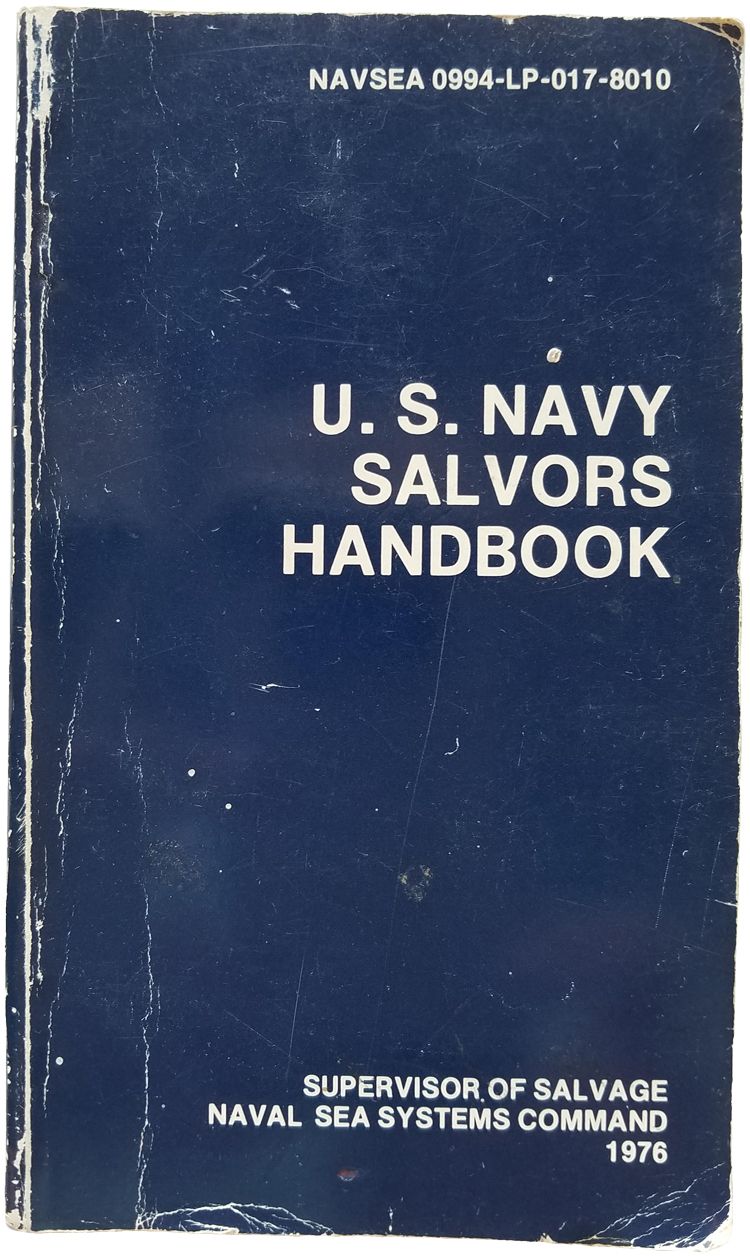 The Navy Book only measures about 3″ x 4″ 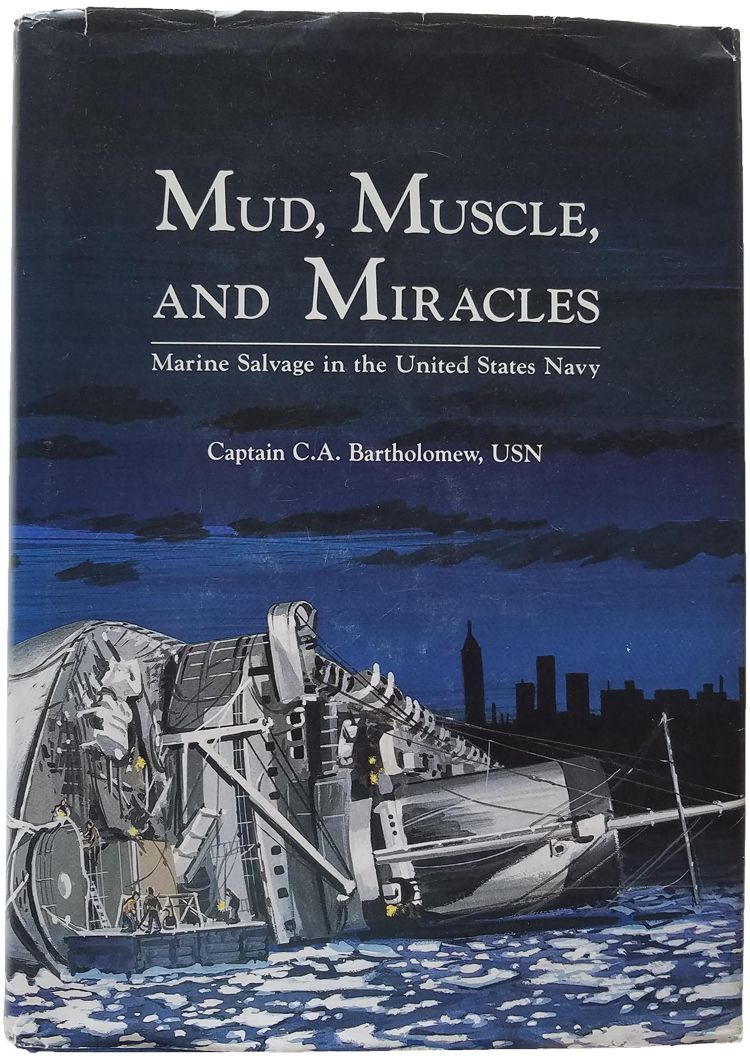 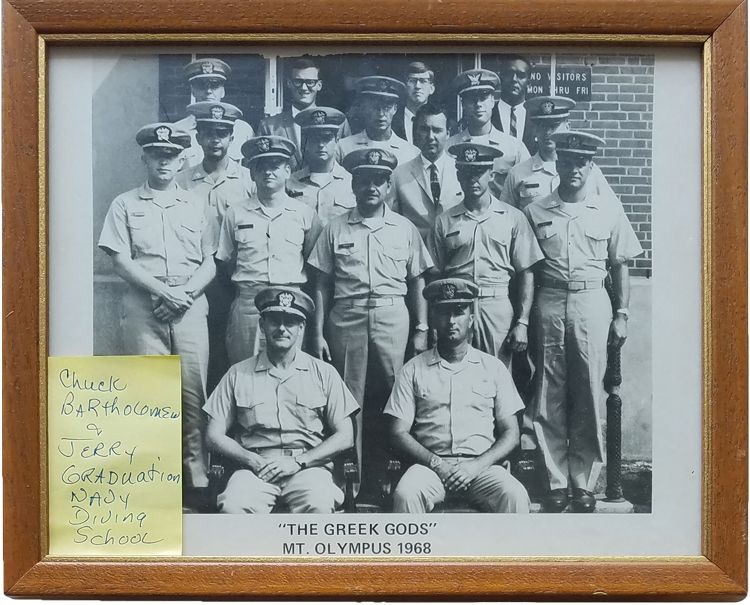 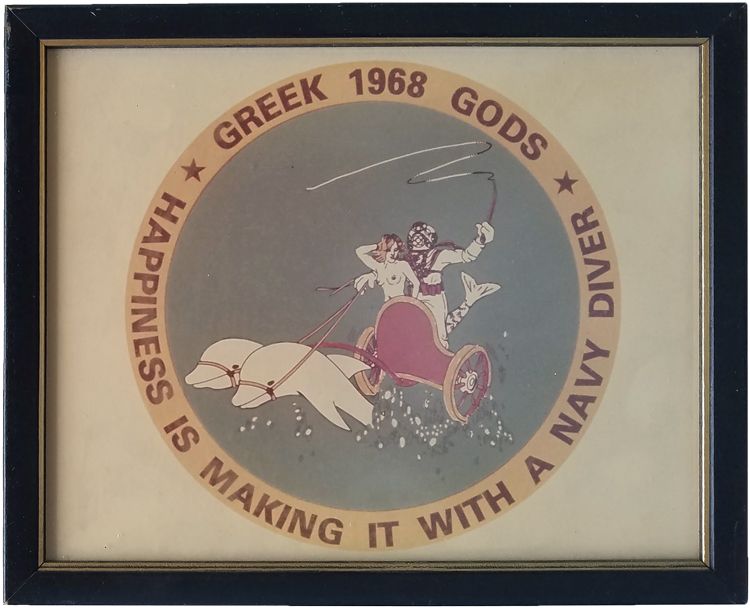 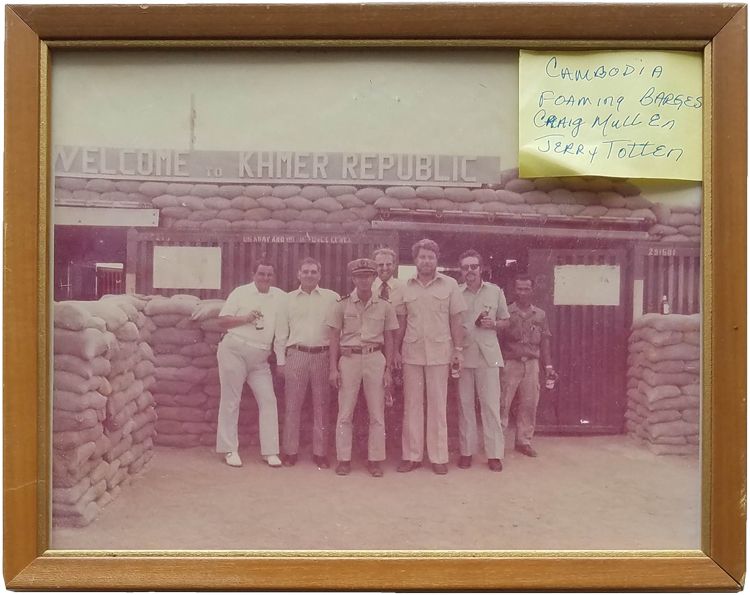 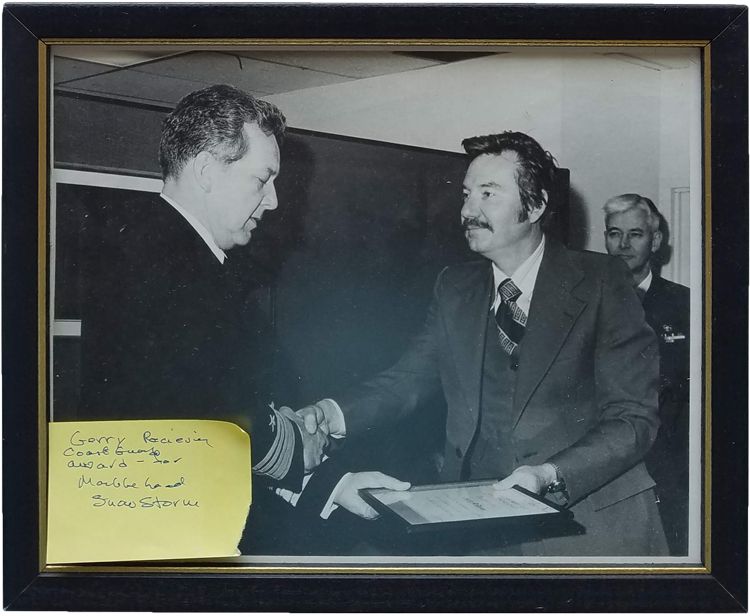 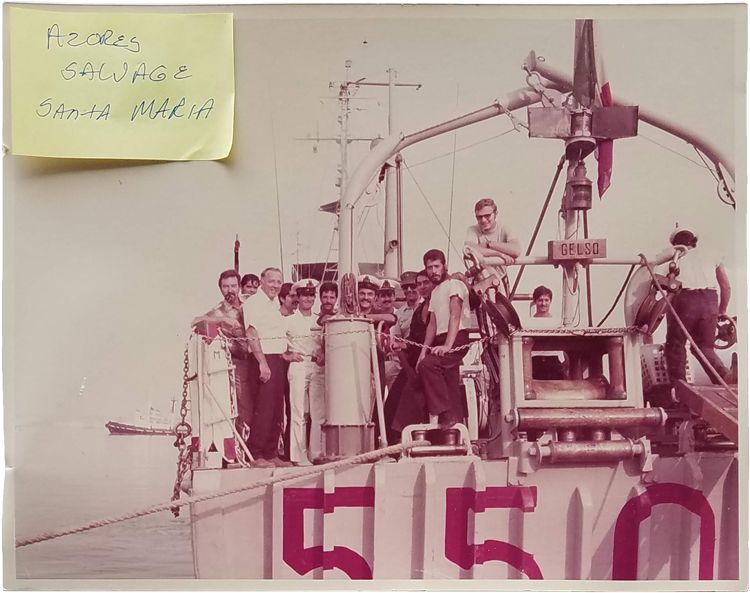 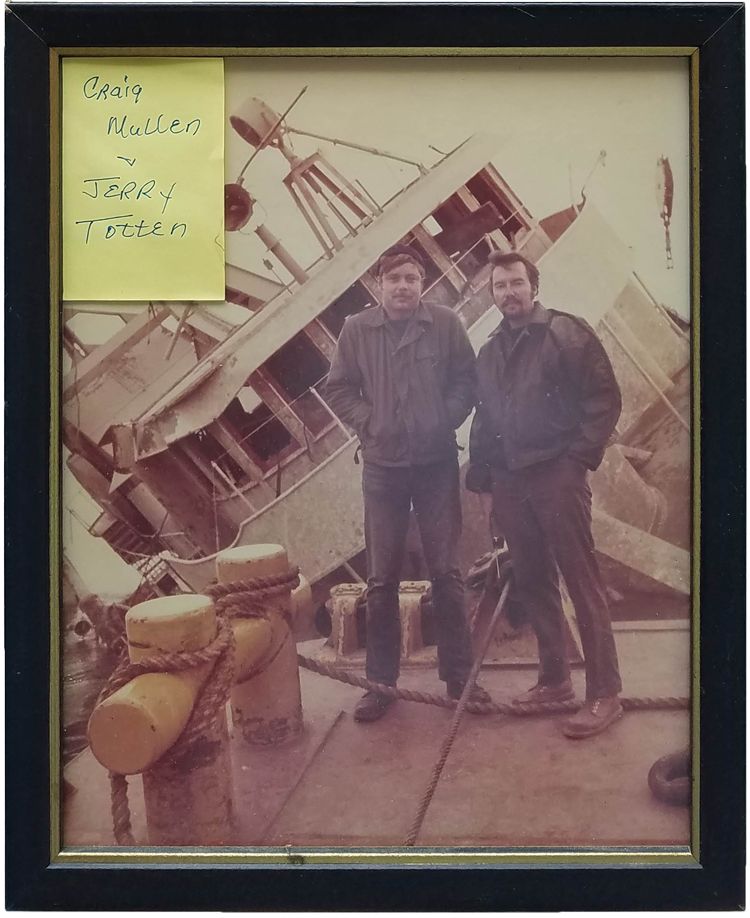 HISTORY OF SCHRADER DIVING: Schrader is one of the oldest names in U.S. diving, second only to Morse. The founder, August Schrader, was a creative and inventive German immigrant who originally set up a shop dealing in rubber products in New York City, NY in 1839, only a few years after A.J. Morse set up shop in Boston. In 1845 he began supplying fittings and valves for rubber products made by the Goodyear Brothers. Schrader was also a maker of daguerreotype apparatus. His original shop was at 115 John Street in Manhattan, NY . Shortly
thereafter he went into partnership with Christian Baecher. Christian was a brass turner and finisher which provided a foundation for what followed.The two partners, having watched divers at work at a nearby New York Harbor jetty, decided to improve the diving helmets in use at the time. In 1849, with the help of Baecher, he created a new copper helmet. Later his interest in diving led to him to design an air pump.
Around 1890, August Schrader saw the need for a bicycle tire valve. By 1891, he produced the Schrader valve. The Schrader valve was his most popular invention, and is still used today. In 1917, the United States Bureau of Construction & Repair introduced the MK V helmet and dress, which then became the standard for US Navy diving until the introduction of the MK 12 in the late nineteen seventies. Schrader and Morse Diving were the two original suppliers. During the onslaught of World War Two only Morse and Schrader were making dive helmets for the navy. DESCO and Miller-Dunn went into production around 1943. In total only about 7,000 MK V helmets were produced by all four companies during the war years with DESCO producing the most, then Morse, Schrader and Miller-Dunn. The scarcity of the latter two are the reason they command a higher price in the market.Undertaken during World War II. The MK V Diving Helmet was the standard U.S. Navy diving equipment until succeeded by the MK 12 Surface-Supplied Diving

BRIEF HISTORY of NAVY MK V DEEP SEA DIVING DRESS: By 1915, the Bureau of Construction and Repair had designed the MK V Diving Helmet which seemed to address many of the problems encountered in diving. This deep-sea outfit was designed for extensive, rugged diving work and provided the diver maximum physical protection and some maneuverability. The 1915 MK V Diving Helmet had an elbow inlet with a safety valve that allowed air to enter the helmet, but not to escape back up the umbilical if the air supply were interrupted. Air was expelled from the helmet through an exhaust valve on the right side, below the port. The exhaust valve was vented toward the rear of the helmet to prevent escaping bubbles from interfering with the divers field of vision. By 1916, several improvements had been made to the helmet, including a rudimentary communications system via a telephone cable and a regulating valve operated by an interior push button. The regulating valve allowed some control of the atmospheric pressure. A supplementary relief valve, known as the spitcock, was added to the left side of the helmet. A safety catch was also incorporated to keep the helmet attached to the breast plate. The exhaust valve and the communications system were improved by 1927, and the weight of the helmet was decreased to be more comfortable for the diver.After 1927, the MK V changed very little. It remained basically the same helmet used in salvage operations of the USS S-51 and USS S-4 in the mid-1920s. With its associated deep-sea dress and umbilical, the MK V was used for all submarine rescue and salvage work undertaken in peacetime and practically all salvage work helmets in February 1980, which in turn was replaced by the MK 21 in December 1993.