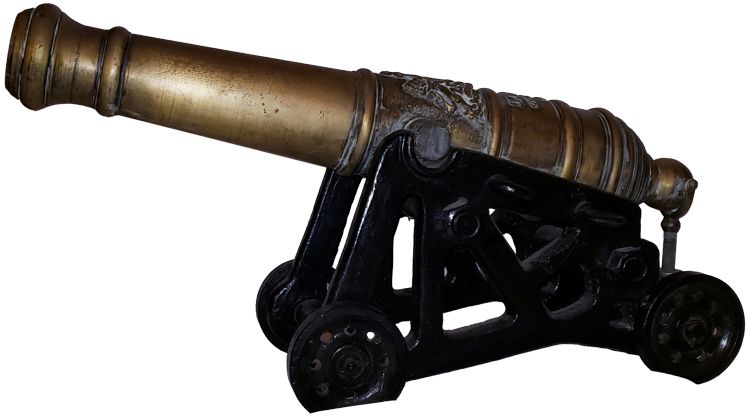 Smaller size cannons such as this were used to signal other ships to pass orders and information, to salute other vessels in passing, to sound a mutiny, and in time of fog, as a distance off signal.Presented is a beautiful bronze cannon made by the J J Wolfe Foundry of Southampton, England, in 1840, with their elaborate cartouche. Although we dont know the specific history of this particular Wolfe cannon, J J Wolfe has a well known history as a cannon foundry in mid 19th century England. The recent owner of the cannon acquired it from a family that had made a special trip to India in 2002 to find a British cannon. The history of this piece beyond that is not known. 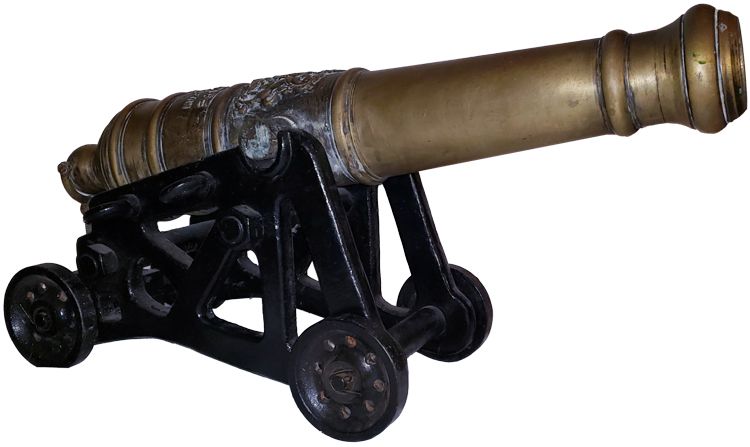 This cannon is being offered for display only and should not be fired unless inspected by a gunsmith!
The cartouche inscription reads: Soit Qu Mal Y Pense and Dieu Et Mon Droit

Typical of this period, the cannon has: a prominent cascabal knob at the breech and a reinforced chamber. 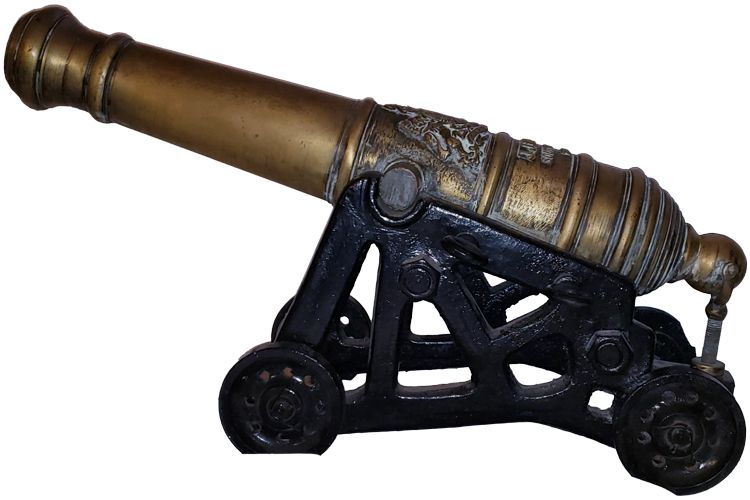 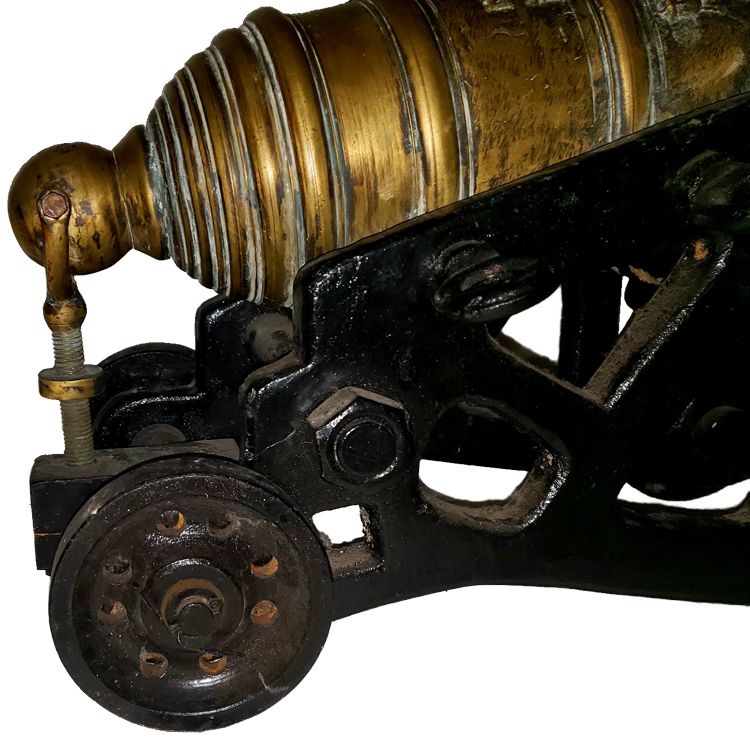 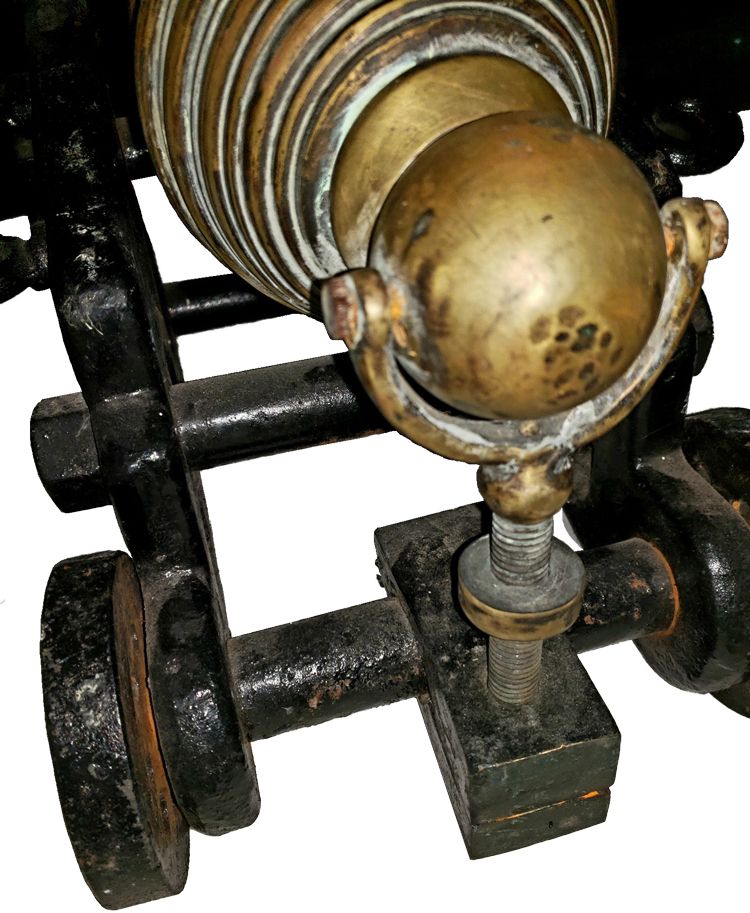 James Joseph Wolfe (also Wolff)(1797 -1845) had a flourishing business at 77 High Street with his foundry at 43 East Street in Southampton, England. His endorsement by the Royal Yacht Club in the later 1830s had his foundry producing a dozen cannons for their fine pleasure yachts at that time. In 1835, the Irish Division of the Royal Western Yacht Club appointed Wolff their armourer to produce brass cannons for their yachts. In the early 1940s Wolff secured an order from the Mexican government for twenty cannons; ten 18 pounders and ten 24 pounders for installation at the fortress of San Juan de Ulua, Mexico.
The Tartar, a small brig of 209 tons, had been chartered to deliver the order, and it had come from London after loading a number of missiles which had been another part of the order. The ship was moored off what was then known as Westlake‟s Wharf, now Chapel Wharf, situated at the corner of The River Itchen and Southampton Water. Wolff had delivered his cannon and seen them stowed on board, which accomplished his part of the order worth the huge sum of £14,000 for cannons and fittings.And then disaster struck. Herein lies quite the story.
The Tartar should have sailed on Thursday, but due to adverse winds, her sailing was postponed. Friday morning at about 10:30, the Captain was called from his cabin by a cry of fire. He saw a mass of sulphurous smoke coming from the after hatchway, and the crew were already in the boat alongside! Unable to do anything alone, he joined them and they rowed to the wharf side where they raised the alarm. On shore, a calmer Captain Byron decided to try to scuttle the ship, and asked for tools for this purpose, but the wharf was by now deserted and no tools could be found. A man (unidentified) offered to do the job and Byron said he would pay any amount. Eventually an adze and an auger appeared, which the crew used to try to bore a hole and for some reason chop at the bows. Before the hole was completed there was an explosion – a shell apparently  followed by several rockets, and the men pulled away smartly. If the captain had confirmed that there was no powder on board, he could have obtained tools and manpower from a nearly shipyard, but as he did not at the time, the docks area was quickly deserted by men who spread the rumour that there were twenty tons of gunpowder on board, so that nothing less than the destruction of the whole town was considered.
Most of Southampton soon became aware of what was happening, and two opposing reactions ensued. Those who had heard the gunpowder rumour quitted their houses and fled from the lower town, clogging roads. Those who had not heard the rumour, or who disbelieved it, entranced at the chance of a free firework display sought high buildings and quaysides to get the best view. 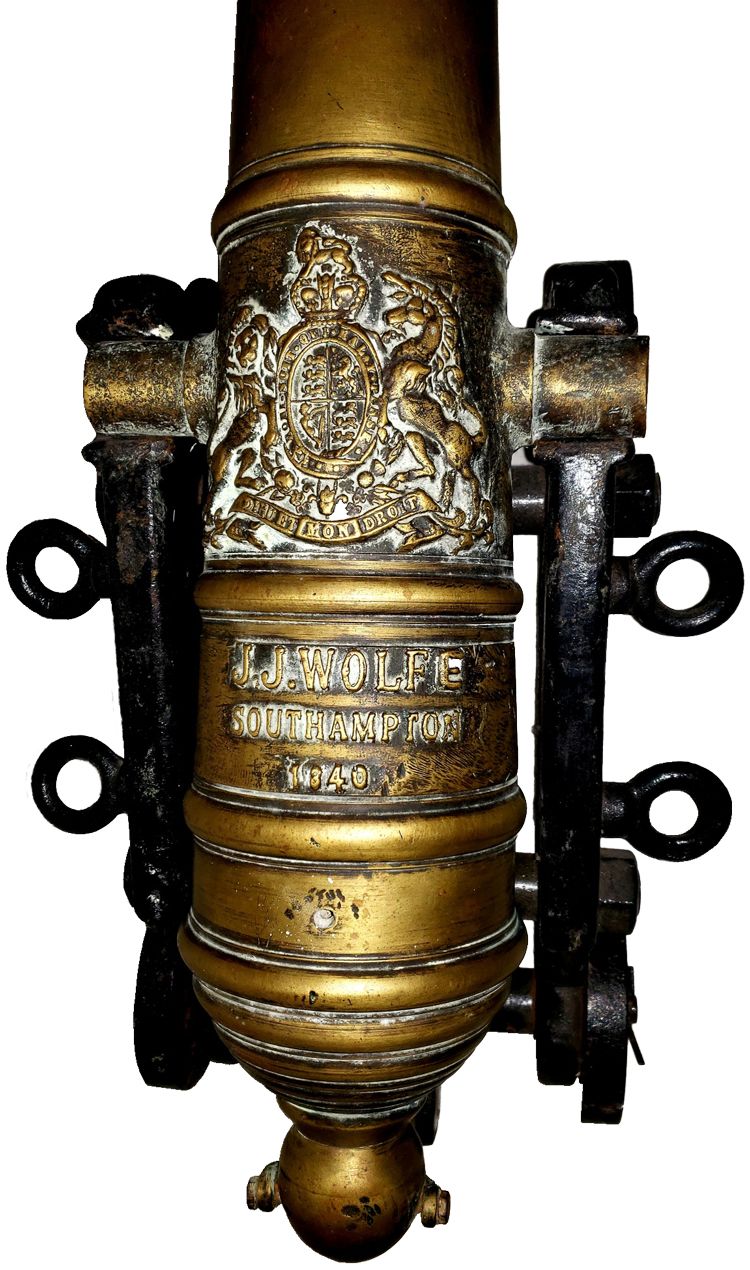 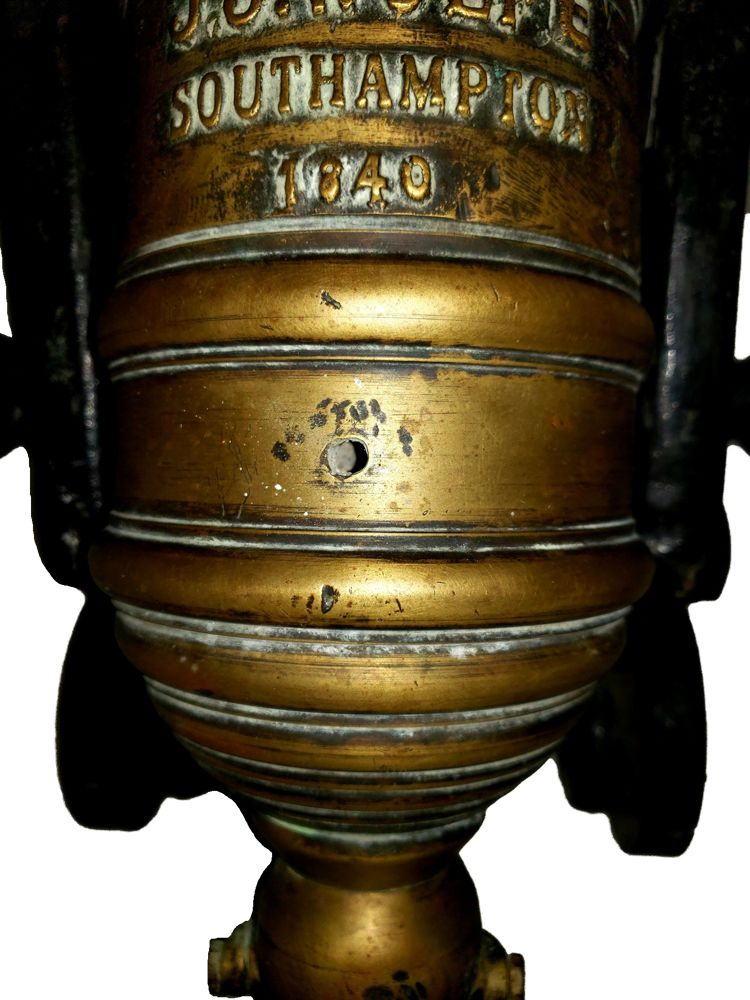 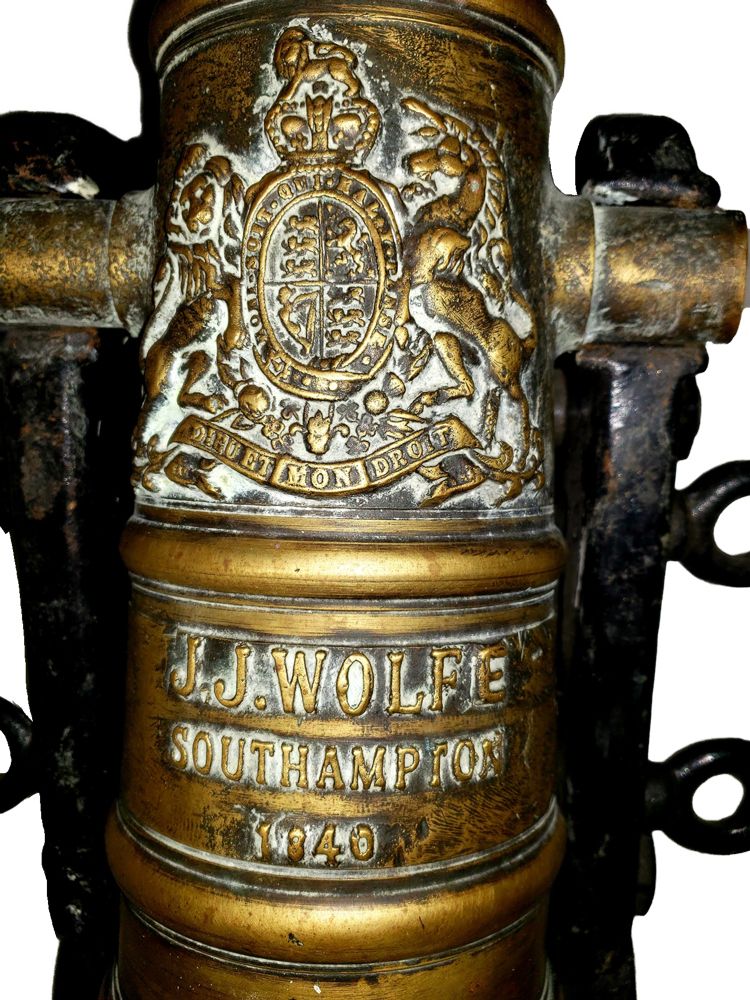 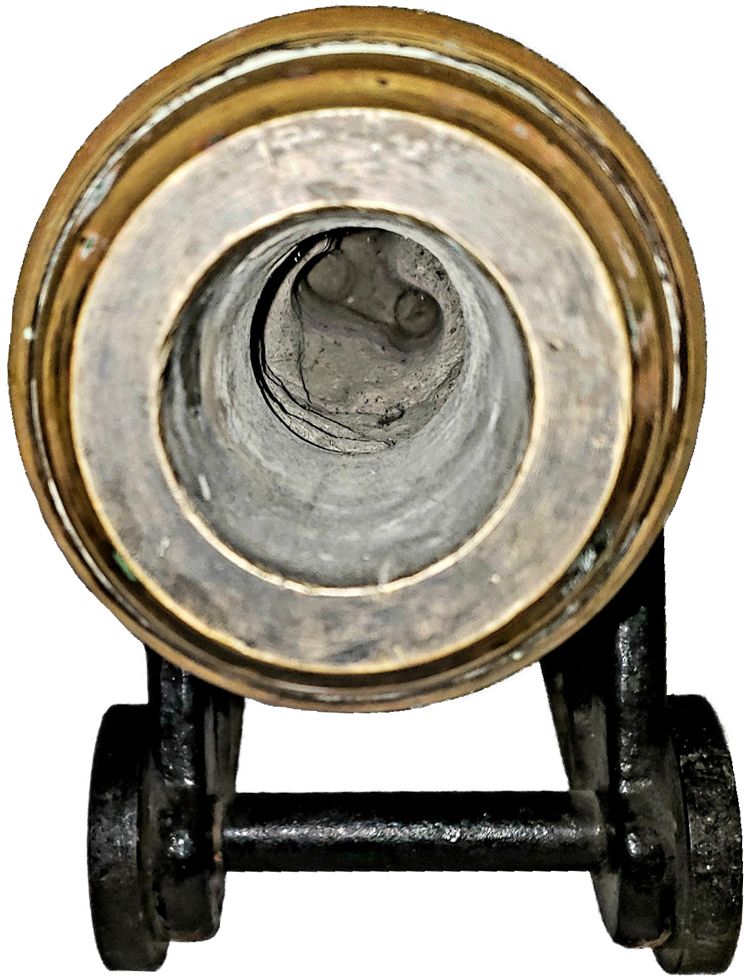 The Mayor had been called by Captain Ward, Docks Superintendent, and both worked with the greatest energy (read  panicked‟) to destroy the ship. A message to Lieutenant Yolland at the Ordnance Survey resulted in the arrival of a troop of 30 Sappers and Miners at the dockside. Mr Coster the harbour master had commandeered horses and moved one of the Platform guns into the Dock, where it was pointed at the Tartar and fired by Mr Wolff (under Lt Yolland‟s direction). This was after 11 o‟clock, the smoke from the after hatch had been followed by flame, smoke came too from the forward hatchway, and then all hell broke loose. A huge explosion, apparently from a whole case of shells, made a noise like the roar of artillery. The after deck was torn up and an immense body of flame, splinters of shells (remember Shrapnell?) and wreck of all kinds burst upwards like a volcano, and in a minute the vessel was in flames fore and aft. About 15 shots were fired from the 9- pounder, all of which missed the ship. One shot ricocheted off the dock wall and hit the cliffs on the other side of the Itchen, striking terror into watchers who had gathered there.
The assemblage of spectators was immense  the Marsh, Bridge Road, the walls of the Railway Terminus, the shores of Itchen Beach, Platform, Quay, Pier, vessels in the harbour, the towers of St Michaels and Holy Rhood, and every spot from which a view could be obtained being crowded. The spectacle was impressive: the vessel alternately issuing smoke and flames, followed by an increased number of explosions. Rockets now began to go off, luckily mostly with low trajectories and falling within the harbour, but sometimes directly upwards to a great height, filling the air with columns of fleecy smoke and exploding showers of shells which rained down fire, and one rocket made a direct hit on the great warehouse in the Docks crushing all before it. The bursting of the latter caused great consternation; the Marsh was cleared in an instant; the Dock grounds deserted, and the bugle of the Sappers sounded the retreat! Other buildings were hit; one of the offices of the Railway, and a shed. A large rocket rose to an immense height and exploded like a line of musketry.Another ship, the John King, was also in the dock, but the crew had earlier gone aboard and eased her cables, so that when the mooring ropes of the Tartar burned through, the John King was 200 yards away, and luckily none of the rockets hit her. It was after half past one that the explosions became more frequent, including those from ammunition intended for 68-pound howitzers supplied the previous year to the Mexican Government. Finally, at half past two, the ship now sank bow first so that only her bowsprit was visible above water; her masts had fallen earlier. An enquiry held by Southampton magistrates a few days later failed to find the cause of the fire. Although the ship itself was complete loss, it was possible to recover the cannon, and it was luck that the renowned divers Abinett and Son were available, having been about to set sail for Corunna on another recovery job. Two guns that were recovered were tested, but exploded on being fired; this was said to be due to their being made red hot by the fire, and then suddenly being cooled when the ship sank. The whole of the recovered cargo was put up for auction in Southampton on August 15th.
Mexico had been at war with the United States since 1836 (it went on until 1853). At West Point in the US, their trophies include five large brass guns captured at Contreras and Chatultepec in 1847; they were manufactured in Southampton, England in 1842 by J J Wolff. James Wolff continued in business for a little while longer, although he must have been ailing at the time of the Tartar disaster. He had made his will in February 1843, and he died in late February 1845. Although he himself was buried in Holy Rhood on March 1st 1845, there is a vault in Southampton Old Cemetery that is the resting place of no fewer than ten of his descendents, some of whom continued his businesses until the end of the century.This cannon is being offered for display only and should not be fired unless inspected by a gunsmith! 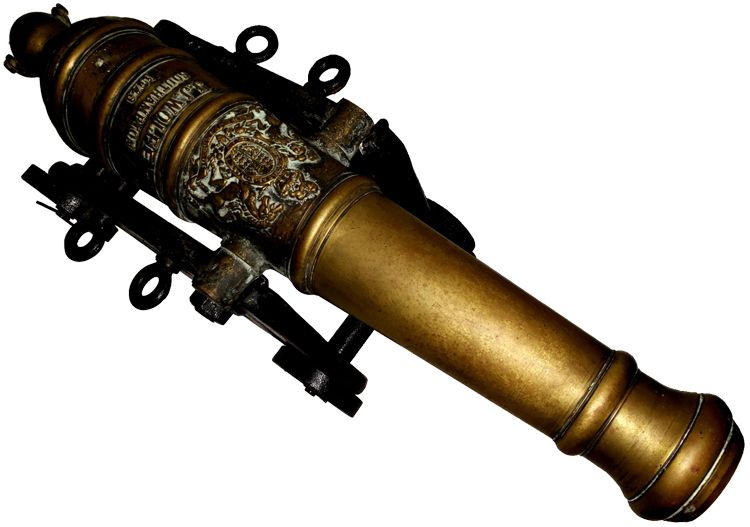 This cannon is being offered for display only and should not be fired unless inspected by a gunsmith.

The cannon has not been fired and should be inspected by a licensed gunsmith beforehand. However, it is being sold only for display purposes. 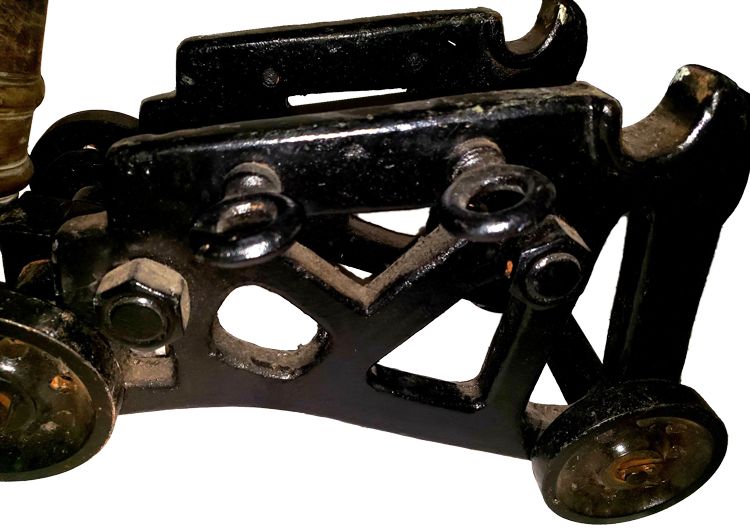