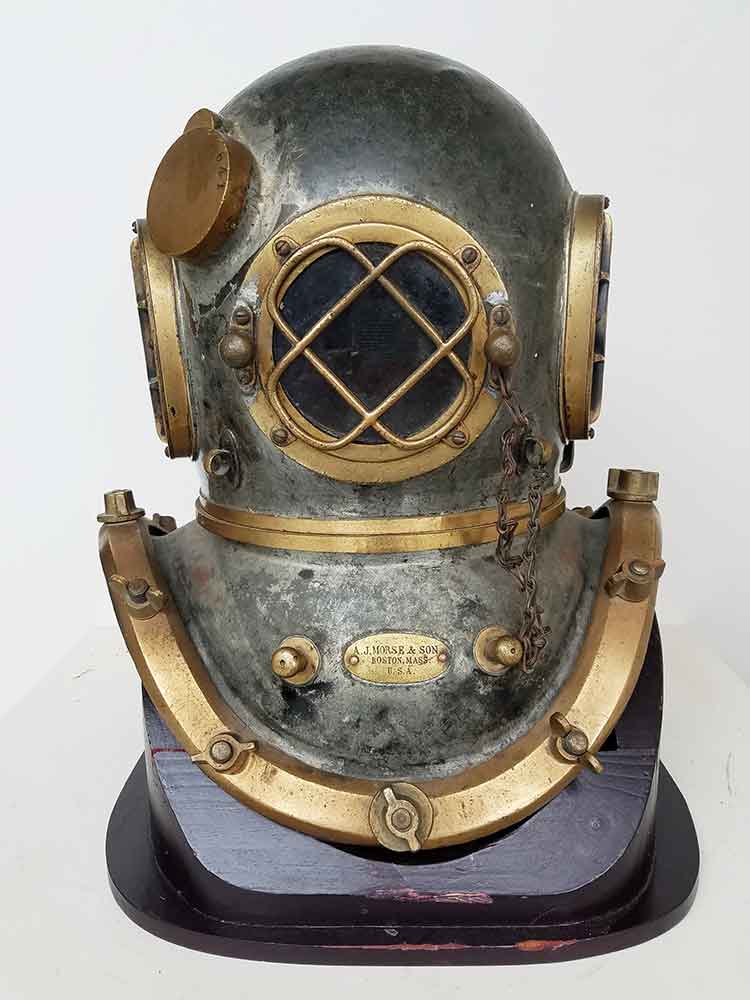 Presented is a very early 3 lite commercial diving helmet made by A. J. Morse & Sons, Boston, Mass. Ca 1905. This hat appears very similar to those pictured in the Morse 1904 catalog.

The hat was employed by the U.S. Army Corp. of Engineers which constructed the Black Rock Locks on the Niagara River near Buffalo N.Y., from 1908 to 1913. The owner of the helmet worked at the Black Rock Locks facility in the 1950s-1970s, and rescued the hat from being scrapped during a lock renovation period in the late ‘70s The helmet would have most likely been used in the construction of the locks in the early 1900s.

There are a couple of numbers on the hat, but not matching a bonnet and breast plate. There is the number 822 on the one of the brailles, and the number 641 on the comm port. The helmet appears to have its original tinning over copper, and the freeflow helmet cap is missing. There is a dent in the rear right back of the bonnet, but other than that, the helmet is in good condition considering its age of over 100 years. These early style commercial bonnets are recognizable by their erect standing rectangular sidelights. This model helmet appears in the 1904 Morse. The stand is not included in the sale.

It should not be dived without having passed inspection by a certified dive shop.

Partial right and left views of this wonderful old A.J. Morse helmet
CONDITION: The front lite unscrews easily and there is a crack in the glass in the right side lite. The exhaust valve cap is missing. The air trane is all intact. The air inlet elbow looks good. The brails look original to the breast plate, and one brail is marked 822. The bonnet shows one dent by the air feed in back toward the top. All the ports look to be original. There is a communication port that looks to have been installed at a later date to the original manufacturer.

Back of Morse Commercial Helmet. No. 822 on right back braille. 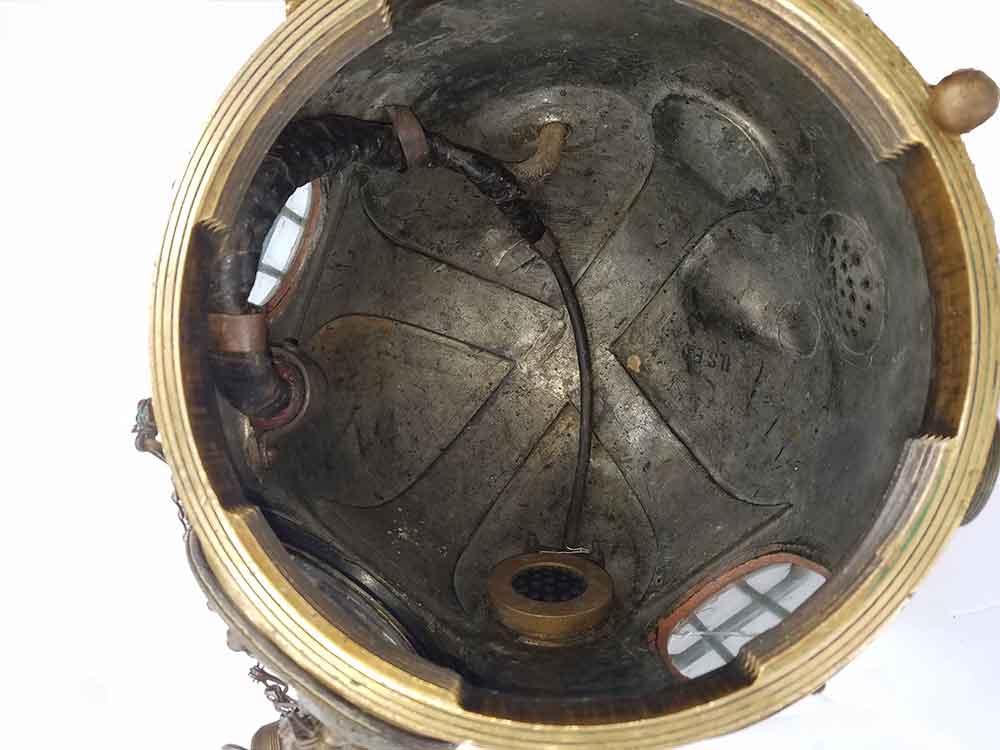 HISTORY OF MORSE DIVING: In the arena of deep sea diving, there are few companies with the longevity and history of Morse Diving. The company was founded in 1837 as a Boston maker of brass ware, three years before Englishman Augustus Siebe manufactured its first closed air dive helmet. During the Civil War, the firm commenced building maritime fittings and began experimenting with early underwater hard hat designs from Siebe-Gorman and other pioneering makers. In 1864, Andrew Morse bought out his partner, introduced his sons into the business, and began to focus on creating new products for underwater salvage expeditions. In 1904, that firm became A. J. Morse and Sons, Inc., under which name it continued until 1940. Then the name Morse was reincorporated as Morse Diving Equipment Company, Inc. Then in 1998, the company changed owners, and became Morse Diving Inc. under the leadership of Ken & Donna Downing where it continued to serve the needs of the Diving Community until 2015 when Morse operations were terminated and much of its assets were transferred to DESCO Corp. of Milwaukee WI.