Presented is a very fine yacht size binnacle with a Wilcox Crittenden compass atop a wood base.  The woodbase is painted or stained black and is a contemporary addition, making for a dramatic display.  The base is electrified with a light below the compass.  There are yacht flag emblems on the wood insert on top of the skylight.  The blue and red one is  the New York Yacht Club and the other one appears to be an owner’s house flag. 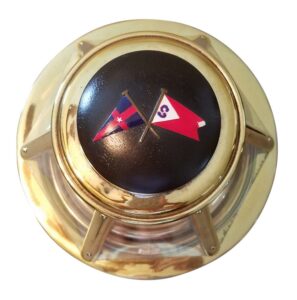 Wilcox Crittenden compasses were very much sought after in both private and commercial  boats from the 1920’s until the 1950’s. After the 50’s, spherical type compasses became the choice for sea navigation.

Binnacles such as these became very popular starting in the 1920’s. Their popularity may have increased after one was seen
aboard the motor vessel “Santana” in the movie “Key Largo” (1948) staring Humphrey Bogart and Lauren Bacall. Bogie also had
one in the cockpit of his famous yawl, Santana.

We are uncertain as to the exact age of this compass, but in consideration of the preceding information, this compass is somewhere between 50 – 80 years old. A wonderful piece of maritime history! The compass bowl is liquid-filled, works and appears to be accurate. The glass-covered bowl contains a suspended gimbal in a binnacle. The base of the compass  is currently painted black…probably to lessen maintenance or corrosion of the brass. The Compass has “WC” for Wilcox Crittenden on the North pointer of the face and is visible in the compass picture above. The number “2-30” is stamped on the bottom of the compass bowl next to base/bowl screw. 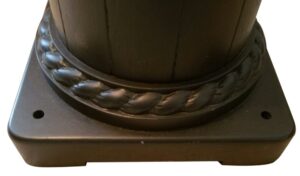 The skylight binnacle is mounted on an attractive wood base with a carved motif, making it a dramatic addtion to any decor.  It is electrified and the light is placed under the compass.