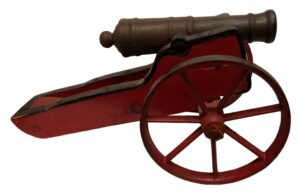 Presented is a classic iron Civil War Period signal cannon on a wood and steel carriage.
The iron signal cannon barrel appears to have been painted black early in its life,  and the surface is in good condition considering its age and use.  The cannon was stamped at the base ring, “1864”.  The touch hole is clear to the bore.   It was in use by the GAR (Grand Army of the Republic) in the Massachusetts area for many years to celebrate the 4th of July celebrations.   The cannon’s proportions are typical of similar barrels that we have sold from the same period except that the cascabel is a larger size. It has a broad reinforcing band at the trunnions. 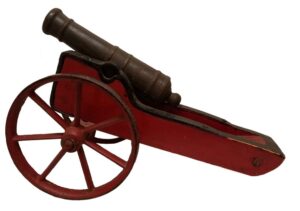 This fine signal cannon is being sold for
display purposes only. No attempt should be made to fire it without inspection by a gunsmith. 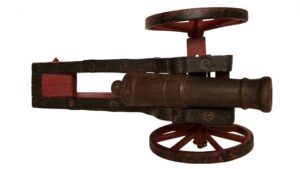 This fine signal cannon is being sold for
display purposes only. No attempt should be made to fire it without inspection by a gunsmith.

The development of an organization of Union veterans, the “Grand Army of the Republic”, was the postwar conception of Benjamin Franklin Stephenson of Springfield, Illinois, who had served a two-year enlistment period as surgeon of the Fourteenth Illinois Infantry during the Civil War. The first post, numbering twelve members, was organized and chartered in Decatur, Illinois, on April 6, 1866. By July 12, 1866, when a state convention was held to form the Department of Illinois, thirty-nine posts had been chartered. Interest spread rapidly to adjoining states. Ten states and the District of Columbia were represented at the first national encampment held at Indianapolis on November 20, 1866.

The Grand Army of the Republic (GAR) quickly became the preeminent veterans’ organization formed at the close of the Civil War. Membership reached its peak in 1890 when over 400,000 members were reported. By then the GAR had well over seven thousand posts, ranging in size from fewer than two dozen members in small towns, to more than a thousand in some cities. Almost every prominent veteran was enrolled, including five presidents: Grant, Hayes, Garfield, Harrison, and McKinley.  The GAR’s principal legacy to the nation, however, is the annual observance of May 30 as Decoration Day, or more recently, Memorial Day.  It was officially disbanded in 1956, and its official documents and history were donated to the Libary of Congress and the Smithsonian.