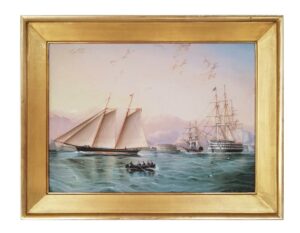 Yacht “America” sailing off of Governor’s Island, (Castle Williams can be seen in the middle background) with two American warships

Presented is an exceptionally fine reproduction, using the Giclee process, of a painting by one of the foremost and most sought after maritime painters of all time, James E. Buttersworth (1817 – 1894).  Most of us who greatly enjoy maritime fine art will not have the opportunity to own an original Buttersworth painting, as they range in price from $30,000 for the smallest ones to over $1,000,000 for the larger canvases.  We’ve recently acquired two reproductions using the Giclee process of his fine works, both depicting his most sought after subject matter, the “America’s Cup” races of the mid to late 19th Century. 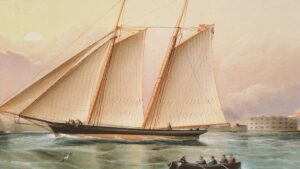 This fine painting depicts the Yacht “America” sailing with reduced sail and with a crew of observers in a rowboat, off of Governor’s Island. Castle William in the background is shown firing a salute to the two American Warships entering the harbor. 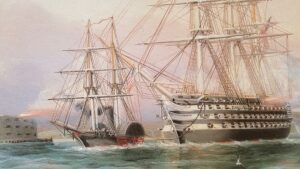 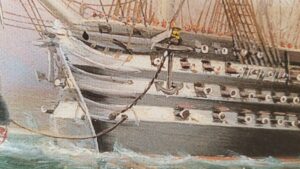 The Giclee process is truly extraordinary as it reproduces even the very finest detail.     The painting is exceptionally well framed with an impressive gold-finished heavy wood frame.  The depth of the frame is 3 1/4″ and overall, the framing gives the painting the prestige and importance it warrants. 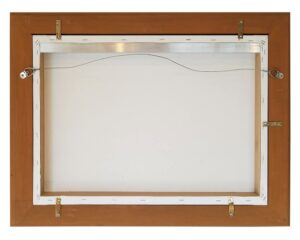 Back of the artwork

James E. Butterworth (1817 – 1894) was from a family of marine artists, his father Thomas, was also an accomplished marine painter. It is thought that he began his craft in his late teens while living in close proximity to the Thames in London.   He immigrated to the United States sometime between 1845-1848, probably to improve his financial situation as England was in recession at the time and he was a self-employed artist.  His family, wife and 5 children, probably followed at a later date, and eventually settled in Hoboken, New Jersey.  He was in the best proximity to witness the heyday of American packet and clipper shipping which occupied his early career.  After 1870, as American shipping declined, his focus turned to the elegant and swift racing yachts of the period.  During  The Gilded Age, many of the newly rich became enamored of the beautiful and elegant yachting sport and began to develop designs from packet schooners for racing.  The most famous of these yachts was “America” which eventually competed in the Royal Yacht Squadron’s “100 Guinea Cup” in 1851 – won the race which eventually became “The America Cup” race series.  James Buttersworth recorded the participants of 8 of these challenges and the trials preceding them.  These paintings remain some of the most sought after of his body of work.

The lovely book, “Ship, Sea and Sky” by Richard Grassby, contains wonderful narratives about Buttersworth, and the history and context of the world in which he produced such wonderful maritime art.  It also contains numerous color plates of his work.

The Giclee process of reproducing fine art:   Giclee is a French term meaning “to spray”, referring to how an inkjet printer works and how giclee prints are usually produced. These large format inkjet printers use small spraying devices that can both match color and apply ink precisely, giving artists a high-quality print of their original art. The original artwork is transferred to the computer via a scanner or digital photo and printed on canvas.