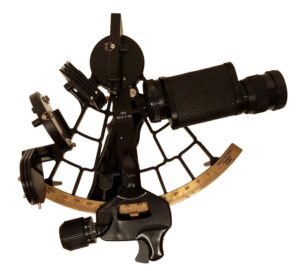 Presented is a very fine example of a post-war C. Plath sextant,  Serial No. 61925. It comes with its deluxe,  varnished Mahogany case with a  prismatic 6 x 30 Sun scope. The original certificate issued by C Plath is included.

Back View
The sextant is housed in a Mahogany wood case with energy absorbing sponge liner. The sextant sits in the case with its handle down and secured by a lever. On its index arm is the Deutsche Hydrographic Institute seal of approval.
This fine instrument appears to be in excellent condition and appears to have seen very little use.  The mirrors are clear as is the scope. The index arm moves freely.  The only negative is that we were unable to get the light to work.

DHI LABEL: The Deutsche Hydrographic Institute stamp of approval elevates it to the highest level because it indicates this instrument was tested by DHI and found to meet the more stringent standards for commercial use. Hence, this sextant sold for more originally than the regular Navistar Classic.

The Navistar Classic was the top of the Plath line and was made in limited quantities, and was manufactured with a guaranteed non-adjustable instrument error of 10 arc seconds or less. The certificate states “This instrument is free of errors for practical use”.  It sold for a premium over all its other sextants. For example, almost 30 years ago, they sold for over $1000.00, and as recently as 2001, the price had risen to $4000.00.

You can identify the “Navistar Classic” by these clues:

1. It has a special micrometer drum
2. The Navistar brand imprint on the arc.
3. The vernier has six indents and reads to 10 seconds of arc.
4. Comes with a fine wood case with an absorbent liner,
5. And originally comes with an instruction booklet, and Plath’s
certification with matching numbers which are present. 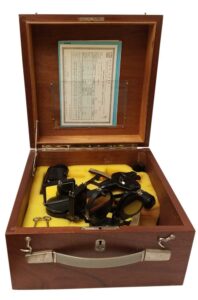 The case is in good condition with some scratches showing. The keys to lock it are present as well as a brush.

History of the C Plath Company

In brief, Carl Plath started manufacturing sextants, in addition to other nautical products, in Hamburg Germany in 1862 through the purchase of the David Filby instrument company though the company’s origin dates back to 1837. As a result of WW II, C.Plath was dismantled completely by the occupation forces. Around 1950, various prohibitions were lifted, and C. Plath was allowed to begin production again of sextants and other nautical instruments. Also in 1949, C.Plath was offered a gyrocompass patent and in 1951 the first gyrocompass designed to this patent was presented to the public. C.Plath progressed from the role of instrument maker to that of a modern marine navigation equipment manufacturer. The product range was expanded in the following years by many more modern designs such as autopilots, speed logs, radio direction finders, etc.

In 1962 C.Plath was acquired by Litton Industries, a large American concern. The C.Plath North American Division was set up in 1978 in College Park near Washington. 1996 saw the introduction of the world’s first fiber-optic solid-state gyrocompass by C.Plath. The first ever gyrocompass with no moving parts. Sperry Marine was formed in 1997 with the combination of C.Plath, Decca Marine, and Sperry Marine with more organizational changes yet to come. After 163 years, C.Plath changes its name to Sperry Marine in May 2000. In 2001 Sperry Marine becomes part of the Northrop Grumman Corporation. In the 1990s Plath came out with a series of new sextant designs with overlapping designs and confusing names. They seemed to have lost their way. Shortly thereafter, C. Plath quit producing sextants.
This Navistar Classic, is the equal of the Navistar Royal in Plath’s line of premium sextants and was made in limited quantities to the same degree of non-adjustable instrument error of 8 arc seconds thereby putting it in the same class. Because it was a new design in 1990 with many advanced features, it sold for more than other sextants. The visual clues are the flat index arm with diode lighting, and the special micrometer drum with a rotating vernier, and Navistar brand imprint. The rotating vernier has six indents and reads to 10 seconds of arc. You turn it to match the “0” point with the “0” on the micrometer drum so that index error reads zero. It comes with its original detailed instruction booklet, with Plath certification and the number 61925, but no date. C. Plath quit producing sextants around 2001. The parent company has completely liquidated everything including machinery, equipment and spare parts.