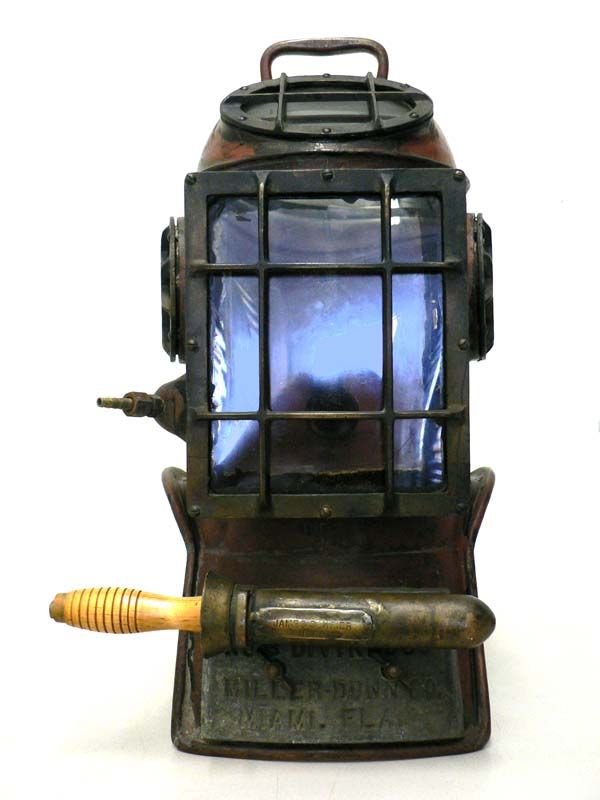 DIMENSIONS OF HELMET: 25” H
x 13 1/2″ W X 13” D
WEIGHT as shown 46 lbs
Copyright 2006 by Land And Sea
Collection.com, All Rights Reserved.
Presented is a shallow water 4 light Miller-Dunn
Navy Divinhood 3. It is complete in all respects except for the missing rear weight, and has a handset telephone installed.
The helmet is in its state of last being dived and has dark reddish paint with some black paint marks over.  Mounted
on the front weight is a sheath for a Navy MK V knife. Under it is a label imprinted with a diver’s name starting with James
that becomes illegible with the year 1950 imprinted under. The helmet comes from a single collection where it was for the
last thirty one years.
This style helmet is one of the
most dramatic of all diving helmets and is a favorite of many collectors. An example should be a part of every serious collection.

BRIEF HISTORY OF MILLER DUNN DIVING: The Miami,
FL. company was founded around 1914 with a focus on shallow water diving using helmets and simple equipment that did not require
special training. Its first helmet of consequence, was the No 1 Divinhood first introduced around 1915 which was quickly was
adopted for use in all forms of shallow water work. We have a No. 1, and look for it to be placed at auction. The original
design was simplicity in its most fundamental sense. This was followed by the No. 2 Divinhood which became the U.S. navy’s
official shallow water diving apparatus, and was part of the ships gear on many naval vessels.
In 1939, just before the onslaught of WW II, the No. 3 Divinhood was introduced.
It was used by commercial and navy divers worldwide for shallow water work.
During the the first days of World War Two only Morse and then Schrader were
making dive helmets for the navy. DESCO and Miller-Dunn went into production around 1943 with DESCO becoming the number one
producer, and Miller-Dunn making the least. In total only about 7,000 MK V helmets were produced by all four companies during
the war years.
After the war, the need for helmets decreased dramatically due in part to
the large surplus of helmets finding there way to the salvage equipment market. The business of Miller-Dunn was adversely
affected and the company ceased operations sometime in the 1960’s.
CONDITION and MARKINGS:  This helmet is
in the condition it was used in its last dive in order to preserve its character and history. It is being offered as a display
item only, and should not be used for any other purpose unless certified by a competant diving shop.
The tag that appears on the right side of the helmet reads:
DIVINHOOD  Style 3
Navy Standard
U.S. 1195973 and Foreign Patents
Miller-Dunn Co. Miami, FL
There is a communication elbow on the back which is a modification, and a
non-standard speaker in the telephone cup. A Navy MK V diving knife is fitted, and is included in the sale. The helmet with
one weight weighs 46 pounds. We can supply the missing weight.