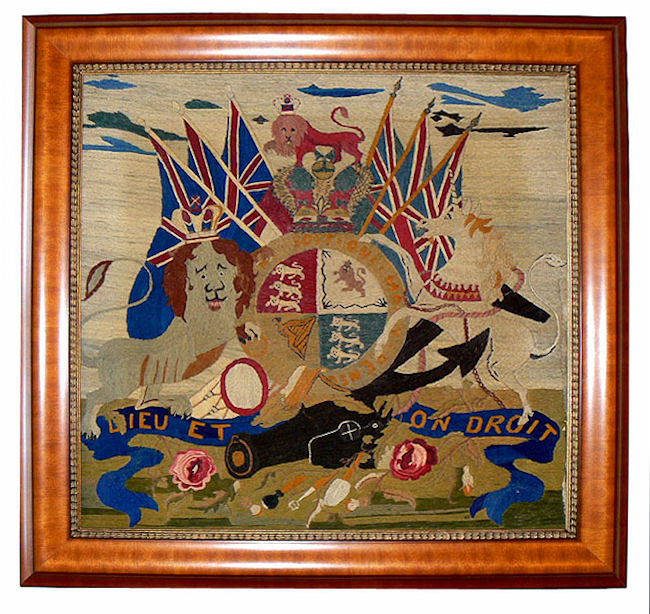 Presented is a truly beautiful sailor’s wool work of a British Royal Crest.  This is an extremely intricate piece that would have taken a considerable time to accomplish. This is one of the most beautiful wool works we’ve had the privilege of owning.  To add to that, it is also magnificently framed.

The royal coat of arms of the United Kingdom, or the royal arms for short, is the arms of the dominion of the British monarch, currently Queen Elizabeth II. These arms are used by the Queen in her official capacity as monarch of the United Kingdom. The Motto ” French: Dieu et mon Droit means ‘God and my right’.  The motto of The Order of the Garter is also present around the middle crest: “Soil Qui Mal Y Pense”,  means “Shame on him who thinks evil”

This is an exceptionally fine “woolie”, meeting all of the criteria listed below in choosing this type of artwork for your collection.

HISTORY of WOOLIES: British sailors crafting woolies were talented
needleworkers. The height of popularity of this form of folk art was between 1840-1880. The sailors learned their craft through
their daily routines of repairing the ship’s sails and taking care of their uniforms. They made the most of their limited
spare time and personal space by creating works of art that could be rolled up and stored under their bunks when not being
worked on. These sailors were knowledgeable about their ships and their surroundings and were skilled at drawing on canvas
and then transforming a simple sketch into a vibrant, detailed, and interesting ship picture. Their accomplishments are magnified
by being self-taught and creating their works for the satisfaction they gave since there was no profit motive. The overwhelming
majority of woolies are unsigned. A recent sale of such a woolwork brought $22,000.00 in Massachusetts and they regularly
sell for in the twenty thousand dollars.

A SIMPLE CHECKLIST FOR BUYING WOOLIES

Condition is probably the most important
consideration. Are the threads intact, are they stretched, water stained, moth-eaten, etc? Expect to see some fading
of color which is a good indication of age. The most highly sought after, and therefore the most valuable, are
those that are identifiable as a specific vessel.

Complexity of design: Woolies that have
more than a simple profile of a ship are more valuable. Some have land in the background, the name of the vessel, various
flags flying, crests or other embellishments that add value.

Design: Some sailors had a knack for composition
and color sense which make the work visually appealing while others ended with an unattractive scene.

Size: The larger the size, the higher the
value. Most woolies are about 16 x 24 inches.

Stitching: There are various stitches that
sailors used many of which came from sail making, but others learned the art of embroidery so they combined complex stitches
for detailing. This adds value. Long stitches take less time, and therefore closely spaced stitches add to the value.

If nothing else, remember HISTORIC SIGNIFICANCE,
CONDITION, COMPOSITION, and COMPLEXITY enhance value