Presented is an official U.S. Navy Small
Craft flag which is frequently referred to incorrectly as a “Boat Flag”. This terminology was last used by President William
Howard Taft in Executive Order No. 1637, October 12, 1912 as follows:

“Boat Flags”: In order that the identity of the stars in flags
when carried by small boats belonging to the Government may be preserved, the custom holding in the Navy for many years, of
thirteen (13) stars for boat flags, is hereby approved.” President William Howard Taft, Executive Order No. 1637,
October 12, 1912.

This flag was made in the New York Navy Yard (Brooklyn)
in April 1912 and is so marked on its header which, in addition, is imprinted, “U.S. Ensign No. 7”. By 1916, the United States
Navy discontinued the long standing custom of using these smaller number of stars on the flags of small craft so by the
time of WW I they no longer were authorized.

CONSTRUCTION & CONDITION: Made from cotton
flag bunting with seven red stripes and six white. The canton is a blue background with rows of 3 2 3 2 3 stars. All stitching
is by machine. The brass grommets are unmarked. There are numerous small holes, and the stitching on the trailing edge is
broken. There was a small area of the hem that has been restitched by hand. We have left the hem in as found condition
because it shows this flag was flown. One star shows stain which is likely mildew. Considering its age and service at sea,
the flag is in excellent condition.

HISTORY OF 13 STAR FLAGS IN THE US NAVY:

Recognized flag authority, David B. Martucci, says, “The thirteen star U.S. Navy boat flag seems to have originated in 1862
(based on the surviving boat flag of the U.S.S. Ironsides, which was launched that year and sunk in 1864).
The 1863 Navy Regulations list five sizes in the “boat flag” category, with fly dimensions respectively of 5, 6, 7, 8 and
10 feet. (These sizes continued in force until at least 1880, as they are listed in Preble’s second volume.) From the period
of 1862 to about 1870-1875, the boat flags bore the thirteen stars in three horizontal rows of 4-5-4. The date of transition
to the most common pattern is not yet known, but the launch of the U.S.S. Saginaw (which was sunk in 1870)
still used the 4-5-4 pattern.”
“Somewhere in the 1870’s the Navy changed the star pattern
of the U.S. Navy “boat flags” to five horizontal rows of 3-2-3-2-3. This star pattern continued in this style until the “boat
flag” was discontinued in 1916.”

Copyright by David B. Martucci
Readers please note: The two ships
that Martucci says were known to fly the 13 Star Flag referred to above were not “BOATS”, they were full size warships of
their day. They were not even small carft considering the size of comparable vessels. The USS Ironsides was
renamed on launching “New Ironsides” to distinguish her from the Frigate USS Constitution which is referred to as OLD IRONSIDES.
The New Ironsides was a first generation ironclad of 3580 tons displacement, had a speed of 10 knots, and was 255 feet
long, with a beam of 56 feet, and a draft of 12 feet. Victim of a galley fire, she sank in 1866. BTW, the USS Constitution
is of 2200 tons displacement and 203 feet in length is still in service in Boston Harbor.
Also referred to by Martucci, the USS Saginaw, photo
at right,  was commissioned in 1860, a sidewheel steamer of 453 tons, she had a length of 155 feet. After serving
in the Pacific Squadron for years and after spending the Civil War years patrolling the West Coast of North America she returned
to the Pacific where she sank after hitting a reef in October, 1870.
We are puzzled by all references to the 13 Star flag as a “boat flag“.
Clearly they were used on ships. The Naval Historical Center in Washington DC refers to it as “a flag specifically
for use by small craft and boats.” Emphasis added. This at least is evidence that the term “boats“
is not ment to be inclusive.
FIRST USE OF MARKING ON A WAR PLANE took place at Vera Cruz, Mexico in
April, 1914 on two Curtis Navy Type C flying boats. 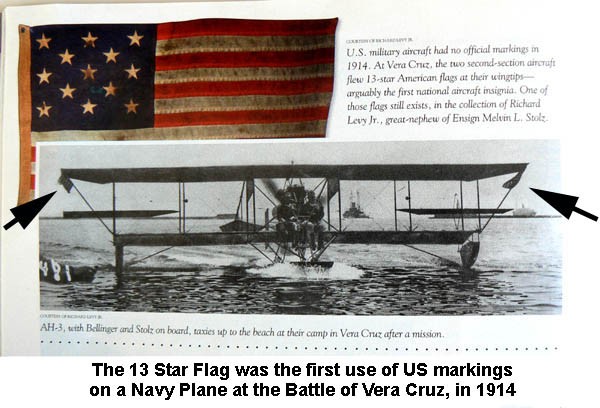 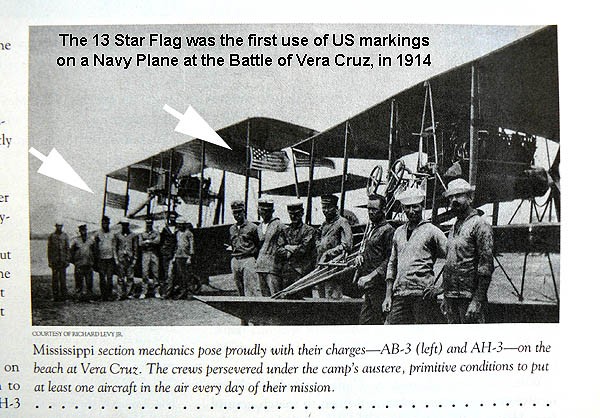