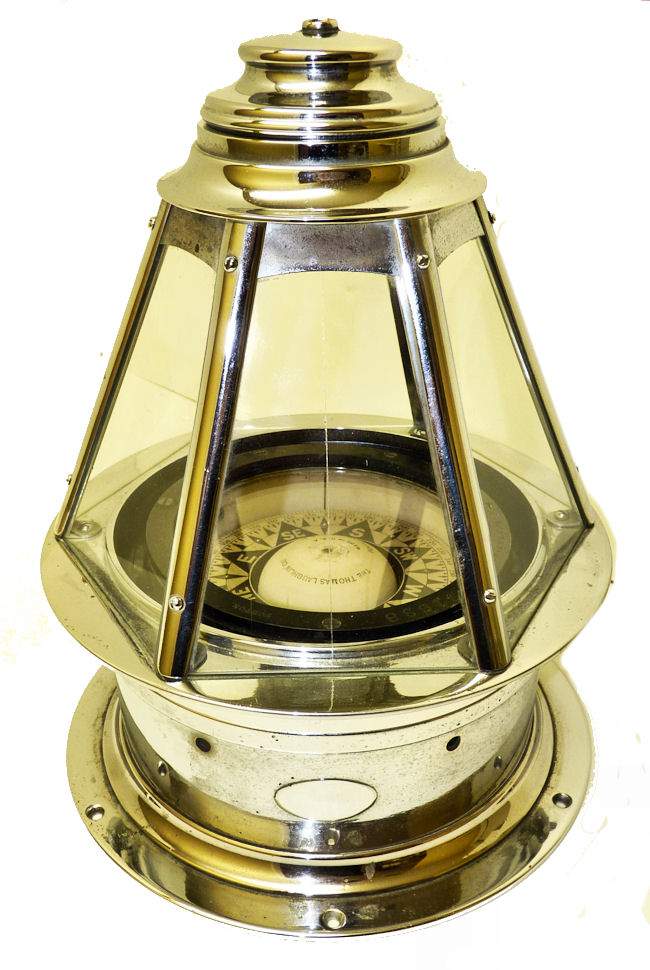 In 1948, Humphrey Bogart and Lauren Bacall stared in a movie called “Key Largo” which was a gangster film set
in the Florida keys and featured a  motor yacht name “Santana“. Binnacles such as these became very popular
starting in the 1920’s. Bogie also had one in the cockpit of his well known yawl Santana. It is shown here covered
with a chrome hood.Their popularity increased after the movie for those who could afford them because they
were considerably more expensive.  Years later, in 1979, I insisted on having one on our ketch Bagheera which served
us well during seven years of ocean cruising. PERKO discontinued making them about 1954, and Ritchie did the same. The
only source was Danforth which stopped their production in 2009 at a price of $3800.00 in chrome. 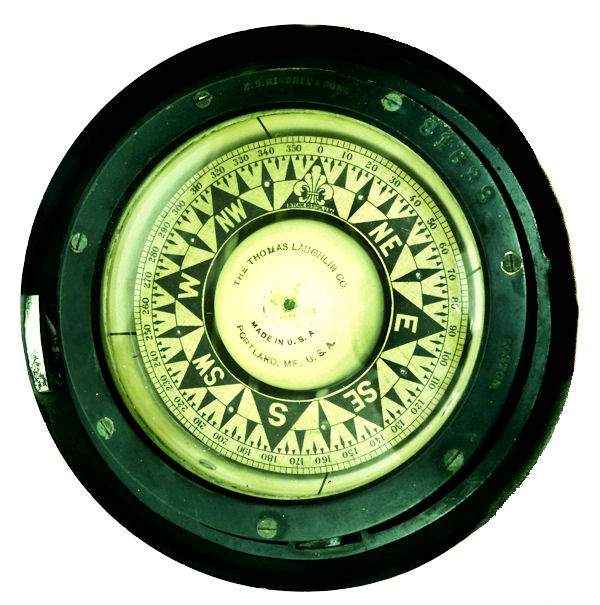 CONDITION: After all these years, the nickel is in excellent condition considering
its age and use at sea with only lightly speckled verdigris. It shows some additional weathering in the front, but very little
elsewhere. The PERKO name tag has been heavily polished and is almost illegible. There is a loss of paint at the top
of the compass card at its pivot. The compass is being sold for display. Its fluid has been removed to preserve the card,
and it is not intended to be used at sea in this condition. It can be made ready for sea by simply adding a mixture of 1/3
alcohol and 2/3 distilled water. There is no lighting fitted. There is a 1mm
hole at the top in which a bulb and receptacle can be fitted from inside. 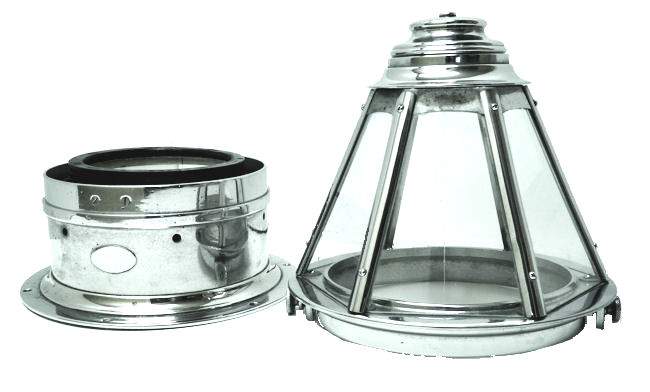 DIMENSIONS:
Overall 12″ H x 9 1/2″ D
WEIGHT 15 pounds
Diameter of compass card  4 1/2″
Diameter of compass max 6″  &  Base 9 3/4″
BRIEF HISTORY OF PERKO INC., Formerly Perko Marine Hardware:
Perko’s name has been synonymous with marine hardware and lighting fixtures for generations. It is a privately owned,
fourth generation family corporation. Founded as Perkins Marine Lamp in the late 1800’s, the original product line consisted
of hand formed and soldered navigation lights, ventilators and chart cases fabricated from brass, copper and galvanized steel.
One hundred more years later, they still produce a variety of similar products and have expanded into a variety of other
modern manufacturing processes and materials. In 1961 operations were moved to Miami, FL where they are now based in a 425,000
square foot manufacturing plant with a greatly expanded line of products.
FLAT RATE SHIPPING to 48 contiguous States $35.00

This rare Skylight or Cathedral
binnacle is ready to go back to sea or it is suitable as a gift or as an addition to any collection of
fine marine artifacts.

OUR UNCONDITIONAL
NO NONSENSE GUARANTEE: If not completely satisfied with your purchase it may be returned within five
days of receipt in its original packaging if without damage. Return items must be insured for their full value. Only a prior
email authorization from us for the return is required. Shipping charges are  included in this offer within
the continental United States if an error is due to our fault.

ACCEPTED FORMS OF PAYMENT are Bank wire transfer,
cashier’s check, money order, or personal check in which case the item will be held until cleared. No credit cards or PayPal
accepted on big ticket items.

Copyright 2011 by Land And Sea Collection™, All Rights Reserved