Presented
is an exceptionally well-made wool work, often referred to as a woolly, of an early British steam merchant ship assisted by
sails on four masts. The forward two masts are square-rigged and the aft two are fore and aft rigged. It is in exceptional
condition. The ship has no bowsprit which tells us the time is about 1875, fifteen years after sailing vessel hit their high
point. She flies the Union Jack or Red Duster from her stern, and a modified version of it with a white border from her foremast.
This indicates she has called for a pilot to help her enter port. Of the two small sailing vessels to her port side, the lead
one might be the Pilot boat. 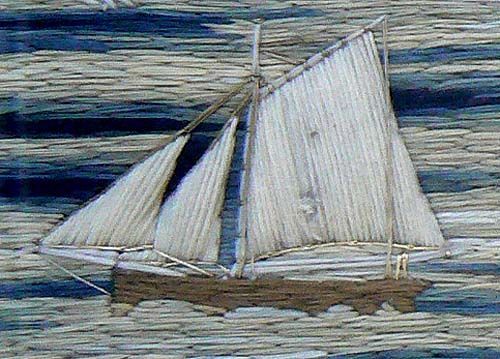 Note the intricate scroll work on the ship’s
bow and stern. This is a not often seen embellishment. The work has a complex stitched mat that is in a light tan/grey with
red detail that adds a formal look to the ship. The small stitches are worked in shades of blue, black, white, tan, and red.
Some are faded with age such as the ship’s hull which was likely black originally. This adds to the picture’s charm. All the
stitching is intact and there is no evidence of damage. The picture was taken under glass using incandescent lighting. In
some photos, the colors may be brighter than when viewed in daylight. 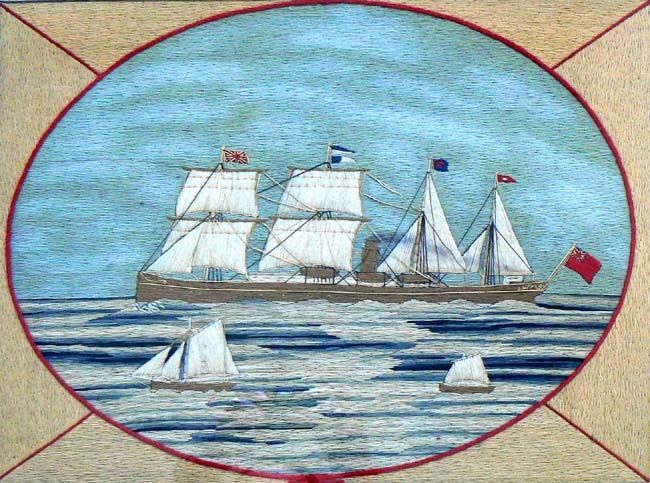 MEANING OF FLAGS: The Union Jack with the
white border on the foremast truck was authorized for use in 1823 to call for a ship’s pilot and was known as a Pilot Jack.
The flag on the mainmast truck is generally the “house” flag which signifies the owner of the vessel. It is usually in the
shape of a rectangle or a swallow tail pennant. The flags shown are pennant style. The shape of the flag on the third mast
looks like a house flag and the one on the last or mizzen mast might be a Royal Navy Reserve status flag. The flag on the
staff at the stern shows the vessel’s nationality as British and dates from 1801.

CONDITION: The woolie is in excellent condition. There
are few if any broken threads and there are no moth holes or water staining. All stitches are tight. The colors are faded
in places such as the ship’s hull and the border. Somewhere in the past, it was removed from a stretcher and mounted on cardboard.
The small pilot boat shows a small imperfection on its mainsail.

A SIMPLE CHECKLIST FOR BUYING WOOLIES
Condition is probably the
most important consideration. Are the threads intact, are they stretched, water stained, moth-eaten, etc? Expect to see some
fading of color which is a good indication of age. Bright vibrant colors
may be the sign of a recently made piece, but it also could be that of one that was stored away or out of the sunlight which
would be a good thing. The complexity of design: Woolies
that have more than a simple profile of a ship are more valuable. Some have land in the background, the name of the vessel,
various flags flying, crests, or other embellishments that add value. Design: Some sailors had a
knack for composition and color sense which make the work visually appealing while others ended with an unattractive scene. The larger the size,
the higher the value. Most woolies are about 16 x 24 inches. Stitching: There are various
stitches that sailors used many of which came from sail making, but others learned the art of embroidery so they combined
complex stitches for detailing. This adds value. Long stitches take less time, and therefore closely spaced stitches add to
the value. If nothing else, remember

HISTORY: British sailors crafting
woolies were talented needleworkers. The height of popularity of this form of folk art was between 1840-1880. The sailors
learned their craft through their daily routines of repairing the ship’s sails and taking care of their uniforms. They made
the most of their limited spare time and personal space by creating works of art that could be rolled up,, and stored under
their bunks when not being worked on. These sailors were knowledgeable about their ships and their surroundings and were skilled
at drawing on canvas and then transforming a simple sketch into a vibrant, detailed, and interesting ship picture. Their accomplishments
are magnified by being self-taught and creating their works for the satisfaction they gave since there was no profit motive.
The overwhelming majority of woolies are unsigned. Gallery prices for works such as this can range from a low of $4000.00
to a high of $35,000.00 on average..