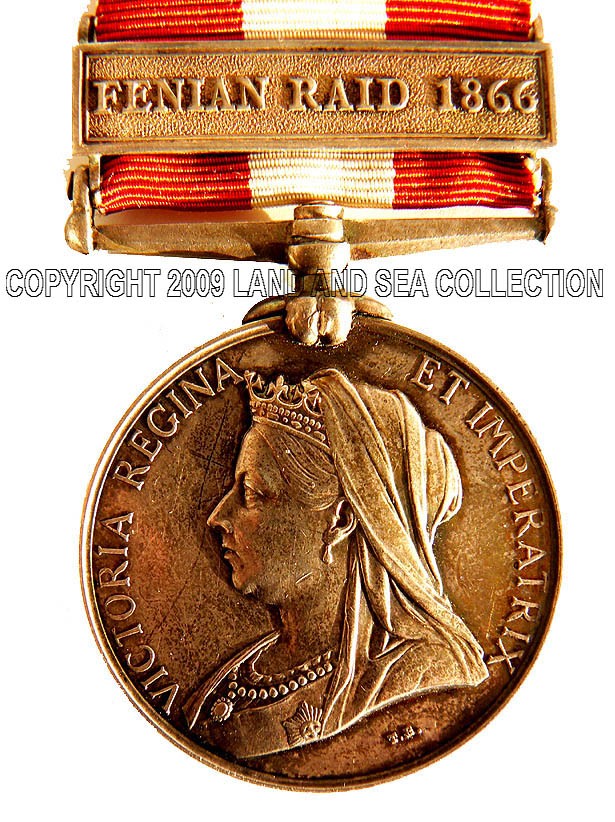 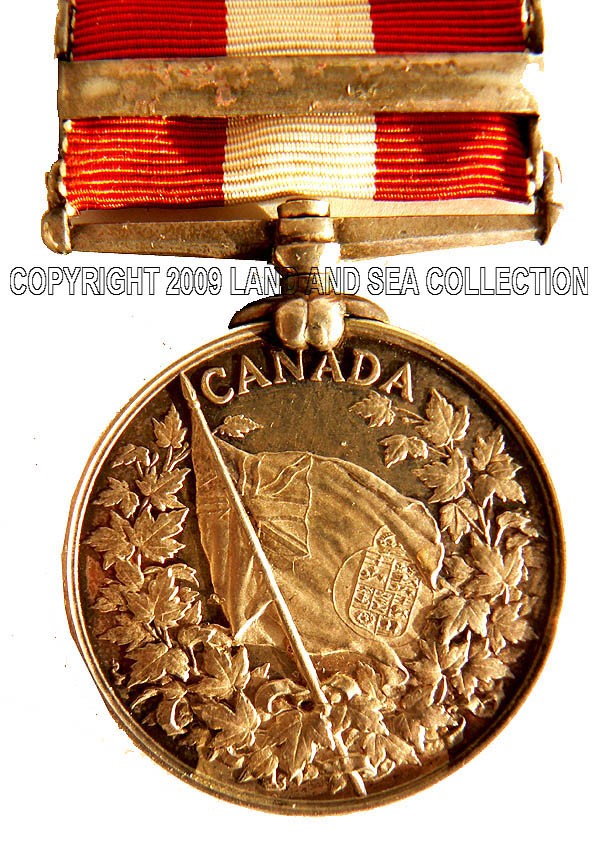 Presented is a Very Fine example of the Canadian
General Service FENIAN RAID 1866 Medal (CGSM) that was awarded to Andrew J. Somerville who
served in the 3rd Battalion of the Victoria Volunteer Rifles of Canada (Montreal) with 1866 clasp. It is confirmed
that his name, and award appears in the battalion rolls.
The current Queen’s Own Rifles of Canada was originally named 2nd Battalion, Volunteer
Militia Rifles of Canada, and was formed on April 26, 1860, predating the Confederation of Canada.
It is Canada’s oldest continuously-serving infantry regiment. The 3rd Battalion was formed directly thereafter.
The Victoria Rifles Company was organized in Montréal in 1861 by members of the Beaver Lacrosse Club in response
to the strain in Anglo-American relations brought on by the American Civil War. In 1862 the Rifles were officially recognized
as a Canadian militia unit under the name, the Third Battalion Victoria Volunteer Rifles. The battalion
participated in the defence against the Fenian raids of 1866 and 1870 and its members also served in the Boer War, mainly
in the Second Battalion, Royal Canadian Regiment. They served until 1961 when they were disbanded.

DESCRIPTION:  Instituted on 7th January 1899, twenty
nine years after the events, and granted to all all officers, non-commissioned officers, and men of the regular and colonial
forces who were employed in repelling the Fenian raids embarked from America, on the Canadian frontier in 1866 and 1870
or who were engaged in the Red River Expedition of 1870.

The medal was awarded to members of the Imperial and Canadian forces who had taken part
in the suppression of the Fenian raids and Riels’ first rebellion, the latter being generally referred to as the Red River
expedition.

The medal was not issued until 1899, it was awarded only if applied for and the recipient
must have:

Fenian Raid (1866): Fenians is the name of the old Irish National
Militia. After the Civil War in the USA, the American Fenians were bolstered
by Civil War mercenaries. In need of something to occupy this large force, John O’Neil crossed the Niagara River, captured
Fort Erie, and made his headquarters at Limeridge. The Fenians defeated a unit of the Canadian Militia at Ridgeway, but withdrew
to the USA when a stronger force was sent to the area. President Johnson
had many of the Fenians arrested. Though Ridgeway involved barely 1500 combatants, the battle and its context
deserve a closer look.

Fenian Raid (1870): On 26 May 1870, O’Neil again crossed the border
near Franklin, Vermont, but was forced back quickly and again arrested.

Red River (1870): Colonel Garnet Wolseley led an expedition to Fort
Garry, leaving Toronto on 14 May and reaching Fort Garry on 24 August. They quelled the Red River rebellion and also helped
avert a Fenian Raid on Manitoba.

The
obverse shows a diademed and veiled effigy of Queen Victoria wearing the Order of the Garter, facing left, and the legend
VICTORIA REGINA ET IMPERATRIX.

The reverse displays the red ensign of Canada, floating with the breeze, surrounded by a wreath of maple leaves and surmounted
by the word CANADA.

A plain, straight, swiveling suspender is attached to the
medal with a double-toe claw.

The medal was authorized in January 1899, twenty-nine
years after the last event it commemorated.

There were 16,668 of the medals awarded,
always with bars. Of these, only 15,300 were awarded to Canadian units.
CONDITION: Very Fine with a nice patina of age. The suspender
bar pin is missing.

HISTORY OF THE FENIAN RAID 1866: Fenians is the
name of the old Irish National Militia. After the Civil War in the USA. The American Fenians were bolstered by Civil War mercenaries.
The Fenian raids were attacks by members of the Fenian Brotherhood based in the United States, on British army forts, customs
posts and other targets in Canada in order to bring pressure on Britain to withdraw from Ireland, between 1866 and 1871. They
were also known as the “Irish Invasion of Canada”.

In need of something to occupy his large force, John O’Neil crossed the
Niagara River, captured Fort Erie, and made his headquarters at Limeridge in the first of these raids. The Fenians defeated a unit of the Canadian Militia at Ridgeway, but withdrew to
the USA when a stronger force was sent to the area. President Johnson had many of the Fenians arrested. Though Ridgeway involved
barely 1500 combatants, the battle and its context deserve a closer look.

Most of the raids were successfully repelled by British forces and local
militias. They divided many Irish-Canadians, many of whom were torn between loyalty to their new home and sympathy for the
aims of the Fenians. The Protestant Irish were generally loyal to Britain and fought with the Orange Order against the Fenians.

While the U.S. authorities arrested the men and confiscated their arms
afterwards, it is speculation that many in government had turned a blind eye to the preparations for the invasion, angered
at actions that could be construed as British assistance to the Confederacy during the American Civil War.

For the next few years the Fenians attempted to regroup and in 1870 they attacked Quebec.
A final raid was planned for Manitoba in efforts to unite the unhappy Metis with the Fenians. American authorities blocked
this last attempt.