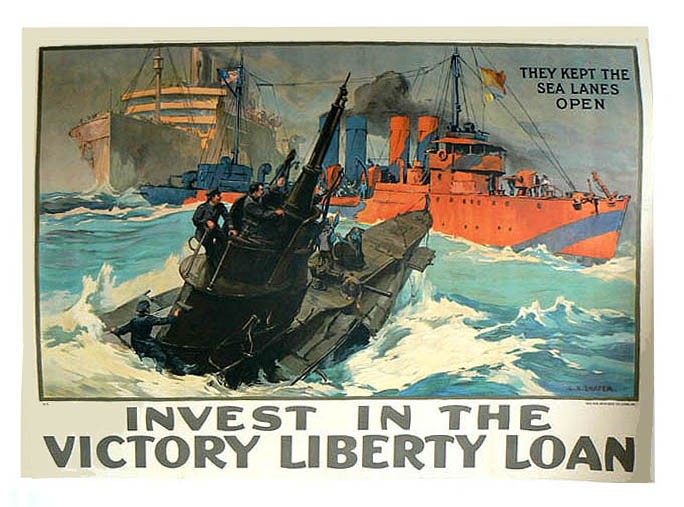 They kept the sea lanes open : Invest in the Victory Liberty Loan

Presented is a dramatic, original lithograph, illustrating
a small incident of the “Submarine War at Sea” during WW I. It shows a German U Boat in the act of surrender to a 4 Stack,
flush deck, American destroyer directly off her bow. The black hulled submarine contrasts with the sun lit, dazzle camouflage
scheme of the Wickes Class destroyer. In the background to the left is a large troop transport ship steaming across the two
combatants sterns. The lighting tells us the artist painted this scene as if it took place at sunset.
It is likely that only a few thousand of these highly desirable stone lithographs
were made using a tedious process where each color is laid down on a separate stone, and transferred to the paper, one
color at a time. As you can see, the vibrant colors of this art form remains unsurpassed even today. The poster has been freshly
mounted on linen by a conservatory and is in very fine condition. There is no damage or imperfections of worthy of mention. 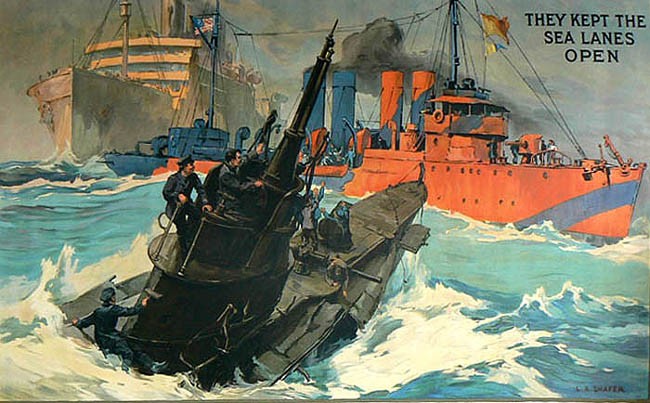 THE ARTIST: Leon Alaric Shafer was a painter, etcher, and illustrator,
who was born in Geneseo, Illinois, and lived in New Rochelle, New York where he was a member of the Art Association. He often
signed his paintings L.A. Shafer. In 1897 and 1905, he exhibited his work at the Art Institute of Chicago, and his illustration
work includes cover designs for the American Legion monthly and the Literary Digest as well as posters of the Great War. Ref: Peter Falk, “Who Was Who in American Art”
LIBERTY BOND SYNOPSIS: From 1917 through 1919, the
United States government issued liberty bonds to raise money for its involvement in World War I. An aggressive campaign was
created to popularize the bonds, grounded largely as patriotic appeals. The Treasury Department worked closely with the
Committee on Public Information in developing Liberty Bond campaigns. The resulting propaganda messages often borrowed
heavily from military colloquial speech.
The government used famous artists to make posters, and used movie stars to host bond
rallies. Even the Boy Scouts and Girl Scouts sold bonds under the slogan “Every Scout to Save a Soldier”. The campaign
spurred community efforts across the country to sell the bonds and was a great success resulting in over-subscriptions to
the second, third and fourth bond issues.  Through the selling of Liberty Bonds, the government raised $21.5 billion
for the war effort.
TIPS FOR BUYING AN ORIGINAL ART POSTER: The factors that affect
price & collectibility in fine art posters

How does one determine the value of original vintage posters? As with fine art or collectibles
such as stamps or coins, the task is not always simple. Here are some guidelines:

1. Printing Method: Most fine art posters from the 1880s through the 1930’s were
printed using the difficult and now highly valued process of stone lithography in which: 1) each color is hand drawn or painted
onto a separate slab of porous stone, 2) the design is “fixed” on the stone with acid, 3) fresh ink is applied to the stone
and absorbed in the fixed areas, 4) the ink is pressed onto the paper through pressure to transfer the image, and 5) after
drying the process is repeated with other stones for the other colors – typically a stone for yellow, red, blue and black.
The vibrancy of color and texture achieved in stone lithography is unsurpassed to this day.

After World War II, stone lithography was replaced by the photo offset and silkscreen
processes. Typically these mechanical methods are less highly valued, although offset or silk-screened posters can still command
high prices if they are rare, were created by a highly recognized artist or advertise a famous movie. Today, silk-screens
especially from Switzerland and Japan can be quite spectacular.

2. Originality: To be valuable, a poster must be a design created originally
as a poster by the artist, and be an example from the original printing. Usually only one run of a poster was made, as lithographic
stones used to create it were expensive and had to be ground down for use on the next job. Except for some authorized additional
editions, later reproductions normally have little or no value to collectors.

3. Artistic Achievement: Posters by recognized artists and graphic designers
normally have a higher value. Toulouse-Lautrec’s great posters legitimized the medium as a form of fine art, and attracted
other talented artists to the field. Today, the list of so-called “notable” artists has greatly expanded as collectors have
become exposed to specialized areas of collecting through the media, books and exhibitions.

4. Subject: Demand can vary dramatically for different subjects. Typically, ocean
liners, automobiles and skiing are high demand subjects, while posters for laundry soap or peas have less intrinsic appeal
to most people.

Subject appeal, however, can change dramatically. For example, there was new interest
in the cigar poster in the late ’90s, while interest in cigarette advertising declined.

5. Rarity: Posters were customarily made in runs of 250 to 3000 for posting on
walls or poster kiosks (War posters often had runs over 10,000 or even 100,000). Those that were posted normally did not survive,
so we are left with those that were saved by artists, collectors, clients or museums, or were left over in a printer’s warehouse.
The number of surviving posters varies tremendously by artist, country, client and printer. Rare posters of quality attract
more interest, and may therefore sell for a considerably higher price.

Rarity can be difficult to determine, as no one generally knows how many of an image
were printed, never mind still exist. And as museums and collectors take a poster out of the market, availability can change
dramatically.

6. Condition: is a corollary of rarity – when a poster is rare, collectors often
will consider it even in poor condition. Posters are graded from A to D based on their condition before restoration. In some
instances condition can make the difference of thousands of dollars in price.

7. Conservation: Today most posters are mounted on canvas or rice paper (Japon)
using conservation methods. Often touch-up restoration is done with watercolor pencils and is reversible. Non-conservation
techniques such as dry-mounting or non-reversible touch-up can reduce the value of a poster, as the poster’s life is
shortened or its originality compromised.
Credit to © International Poster
Gallery