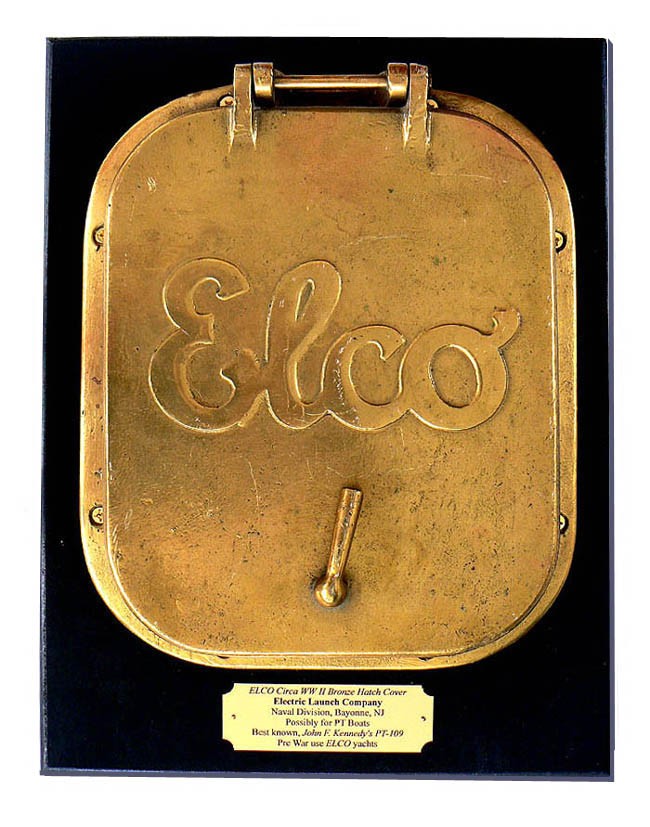 PRESENTED is an authentic ELCO bronze
hatch with frame as was used on pre-WW II yachts, and possibly on the PT boats that were built by ELCO during WW
II as we were told. We were unable to find any pictures or drawings showing this hatch fitted to a PT boat, but it may
have been used in the interior.

CONDITION: In good serviceable condition showing
some casting imperfections and scratches as would be expected. There is provision for a cork or rubber gasket on the backside
which is missing. The handle is spring loaded and the spring has lost its expansion force.

See this hatch in miniature fitted to a museum quality scratch
built model of a Ca 1930 ELCO, “ABLE HAND“. https://landandseacollection.com/id623.html

ELCO IN WW I & WW II: Elco is
an acronym for the Electric Launch Company, which first made its mark at the World’s Columbian Exposition of 1893 in
Chicago. 55 launches, each 36 feet long and powered by battery-powered electric motors, carried over a million passengers.

By 1900, electric powered pleasure boats outnumbered the combined number of
boats powered by steam and explosive engines (as gasoline powered motors were called). By 1910, the advantages of the range
and power of gasoline came to dominate the market and Elco converted to motor boats.
During World War I, the company built five hundred and fifty 80-foot submarine
chasers for the British Admiralty.
Between the wars, it introduced the 26-foot Cruisette, a cabin cruiser which
became successful. This was followed in the 1930’s with 30-foot to 57-foot Cruisettes and Flattops.
During World War II, ELCO formed the Elco Naval Division in Bayonne,
New Jersey. Nearly 400 ELCO PT boats were produced for the U.S. Navy . After experimentation, the first PT boat built
in any quantity was the 73-foot type. Later 77-foot and 80-foot types were built. More 80-foot ELCO boats were built
than any other type of US motor torpedo boat.
The most notable 80-foot PT boat was PT-109, commanded by future president
John F. Kennedy. In the film PT 109, the “ELCO” script logo can be seen on the cockpit throttle housing in several scenes.