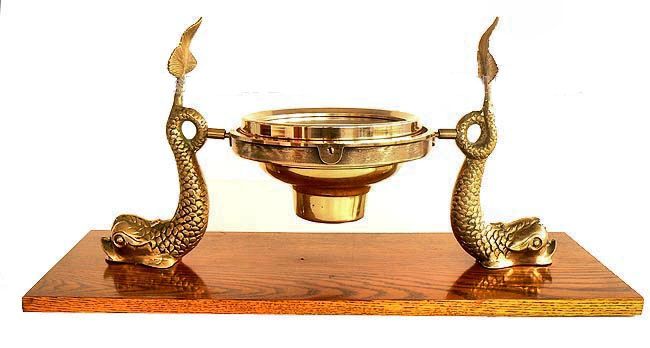 PRESENTED
is an interesting antique compass made by the American instrument maker, D. Baker of Boston. It has been mounted in an elaborate
presentation, suspended between the vintage, brass, dolphins, which are cast in a style reminiscent of the U.S. Navy Submarine
Officer’s Warfare device of WW II. It may be displayed as a focal point in many settings. The Dolphins used with this display have only been seen once before with
a WW II U.S. Navy pelorus displayed in the same fashion as shown below. We again researched all possible sources for
the genesis of the dolphins without success. 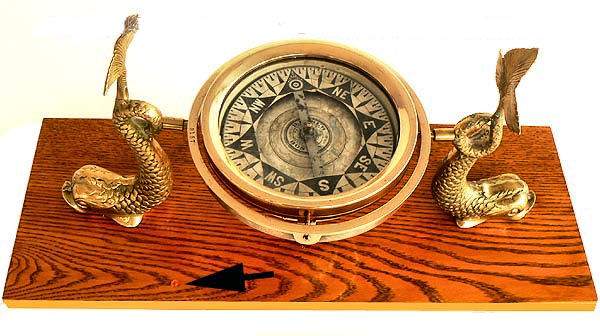 Previous dolphins found with WW II Pelorus display
THE COMPASS is an old paper card compass.
It is solidly made and housed in a glazed, heavy brass case with weight at the bottom. The engraved paper card has an unusual
geometric design as its North pointer over a circular cartouche. It is signed around the center “D. BAKER, BOSTON” and Pat’d
1874 & 1875. The card is divided into eight Cardinal Points, each of 45 degrees, and then into 1/8 and 1/16th points.
Each point subtends an arc of 11 1/4 degrees comprising in total 360 degrees of the compass. It rests on a brass pivot with
a cap. The compass is in good condition, 7″ inches in diameter, and works properly. 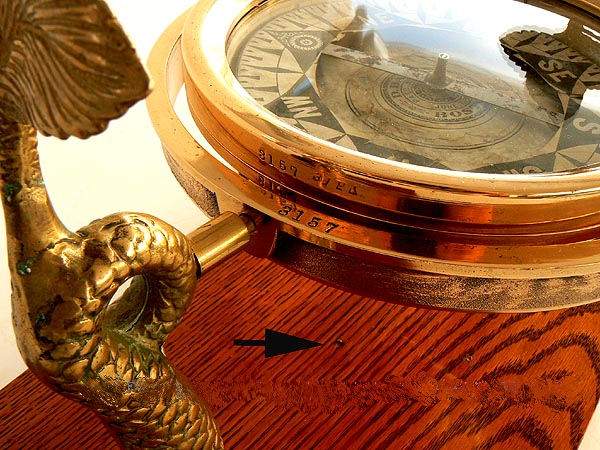 MARKINGS: Pictured above, The number
3157 on the edge of the bezel matches the number on the bowl and gimbal ring as shown in the photo. The black arrow
points to one of the small holes, both of the same size which have been filled and colored to match. See Condition Report
below.

Originally, it would have been mounted in a box, on
a pedestal on the vessel’s bridge wings or housed in a binnacle. There are some minor tears in the paper, and a patch of paper
is missing on the disk upon which the imprint rests.
COMPASS’
MAKER: Baker was born in New Bedford, MA in 1792. Baker is listed in Webster’s and also
in the Whaleman’s list which shows he was a dealer in nautical instruments. Later, he worked with a partner, Thomas Hooper
at 54 Ann St., in Boston, MA. 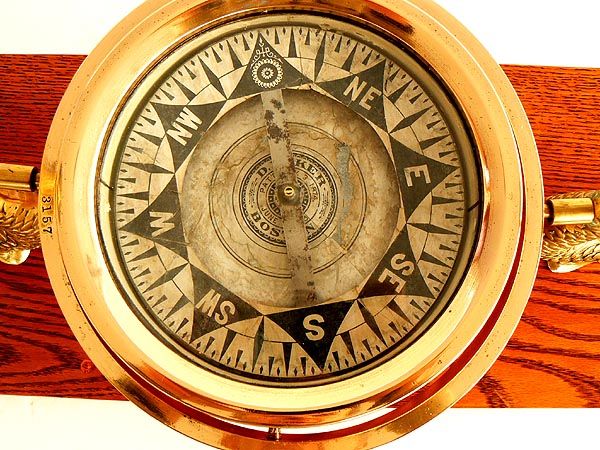 The paper compass card of D. Baker, Pat dated 1874 & 1875 PROVENANCE: The compass, two dolphins, and wood
panel to which they are mounted were acquired by us from different sources over a period of years, and assembled in our shop.

CONDITION:
The stand has three screw holes drilled through the base which have been filled and painted. The arrow in the photo points
to the largest of the three. There also is one scratch in the edge on each side. In addition, the adjustable screws holding compass in gimbal do not recess fully. Ten out of sixteen screws holding the
bezel to the bowl are missing. These can not be seen, and everything is secure. The compass card’s paint is faded. There are
the usual minor marks of age. The compass has been recently polished and lacquered. Considering
its service and use at sea, the compass is in very good, usable, condition and is of high quality. 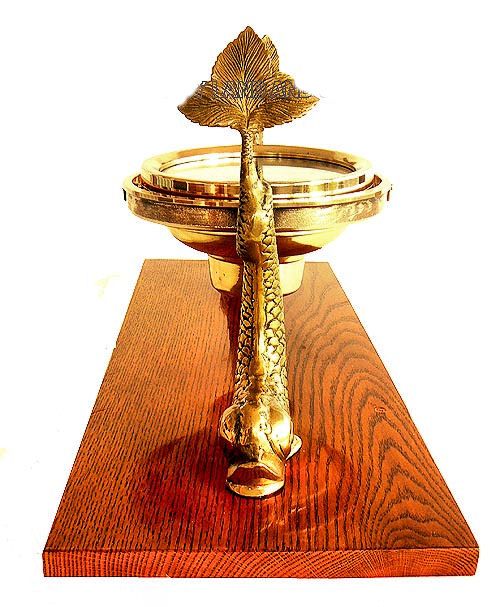