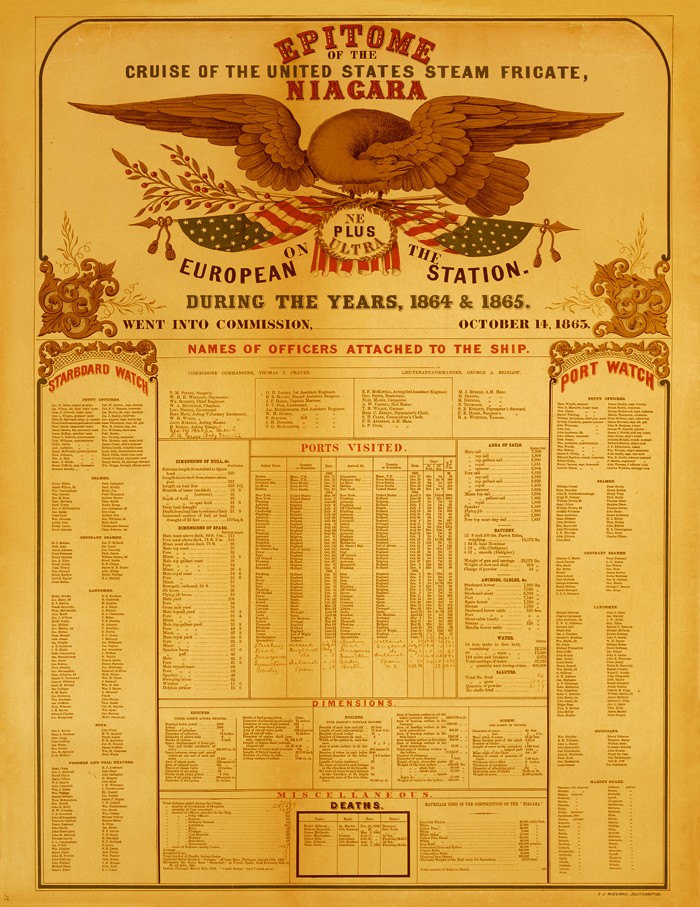 Printed on paper
Publisher S.J.
Weisman, Southampton, England  (The Getty Museum has three examples of this publisher’s works. Active 1860-1865  www.getty.edu/art/collection/artists/10054/s-wiseman.)
Unframed 28″ x 21″                       Framed 32″
X 25″
Hand Penned entries
Presented is an extremely rare, original print,
of a brief abstract, referred to as an Epitome, of the U.S. Frigate NIAGARA on her cruise in European waters during
the Civil War years 1864 and 1865. There she engaged in hostile actions against the Confederate States Ships that
included the GEORGIA, SACRAMENTO and STONEWALL which escaped. The vessel’s senior officer during this deployment was Thomas
T. Craven, Commodore Commanding, and Lieutenant Commander George A. Bigelow.
The printed “Broadsheet” is replete with information covering in details
the vessels construction, her armament, equipment, sails, and more importantly a detailed list of her officers and crew which
make this a truly historic document. The sheet was printed in England before the cruise was complete and there are additional
notations penned in ink of additional ports visited. The last official entry was the passage from Cadiz, Spain to Boston,
MA which ended with the ship’s arrival on September 20, 1865. This contradicts the numerous entries which shows the ship out
of service in 1864.

CIVIL WAR HISTORY OF NIAGARA: Quickly preparedfor duty to assist in the blockade of southern ports, Niagara arrived off Charleston, South Carolina, 10 May,1861, and two days later captured blockade runner General Parkhill attempting to make Charleston from Liverpool. Throughthe summer she gave similar service at Mobile Bay, and was at Fort Pickens, Florida, 22 September when Flag Officer WilliamMcKean in Niagara took command of the East Gulf Blockading Squadron. She engaged Confederate defenses at Fort McRea, Pensacola,and Warrington 22 November, and was hulled twice above the waterline. On 5 June 1862 she sailed for repairs at Boston NavyYard, where she decommissioned 16 June. Recommissioned 14 October 1863, Niagara steamed from New York 1 June 1864 to watchover Confederate warships then fitting out in Europe. She reached her base, Antwerp, 26 June, and from there roved the EnglishChannel, the French Atlantic Coast and the Bay of Biscay. On 15 August she took steamer Georgia, a former Confederate warship,off Portugal. In February and March, with Sacramento she lay at El Ferrol, Spain, to prevent Confederate ironclad Stonewallfrom departing, but the much more powerful southern ship was able to make good her escape.  NIAGARA patrolled withthe European Squadron through 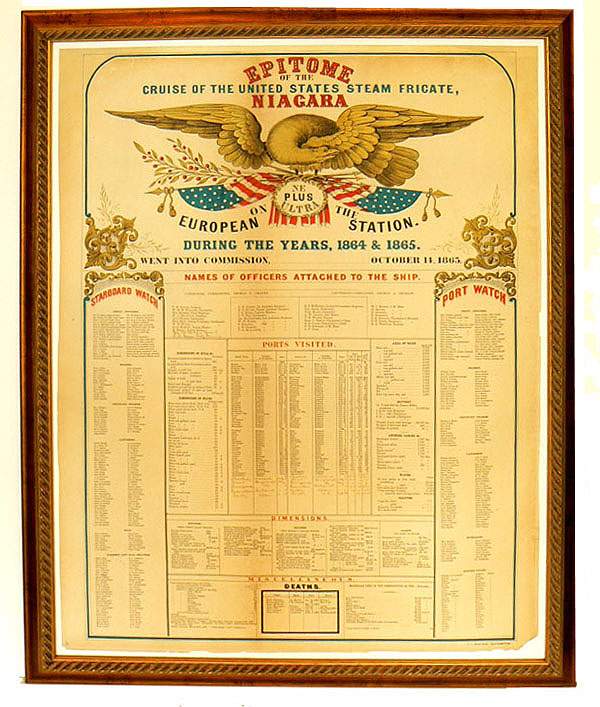 This record from http://www.navsource.org/  (repeated elsewhere) is in conflict with the ship’s own record of the 1864-1865 European Cruise.