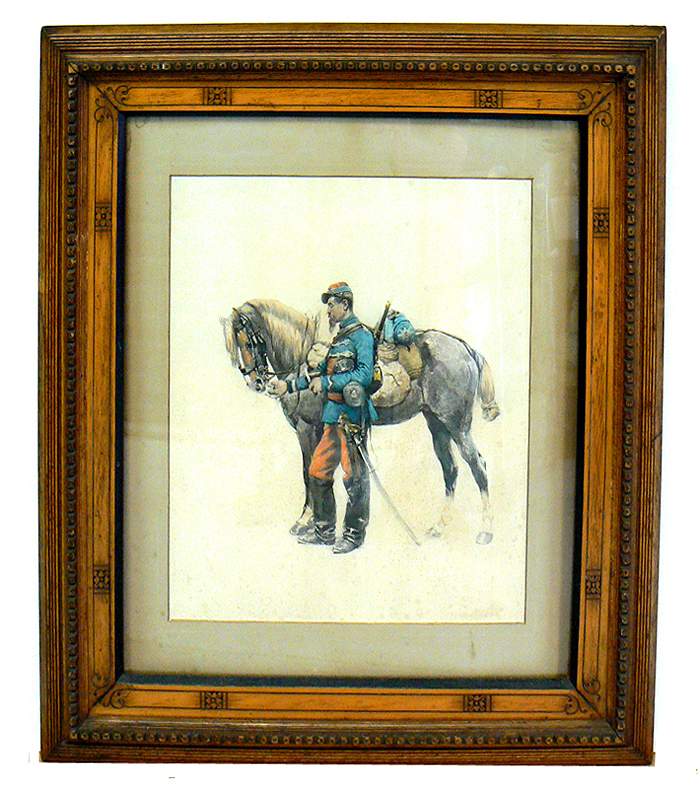 Presented is a wonderful watercolor in a stylistic, incised,
Period frame, by the renown French Military artist J.B. Édouard Detaille (1848-1912). Detaille served in the
Franco-Russian war, and studied under J. L. E.Meissonier. From this military background he became famous for his paintings
of battle scenes, portraits of soldiers, and his overall depiction of military life. His style was notable for its precision
and realistic detail. One of his best-known works is Edward VII and the Duke of Connaught. 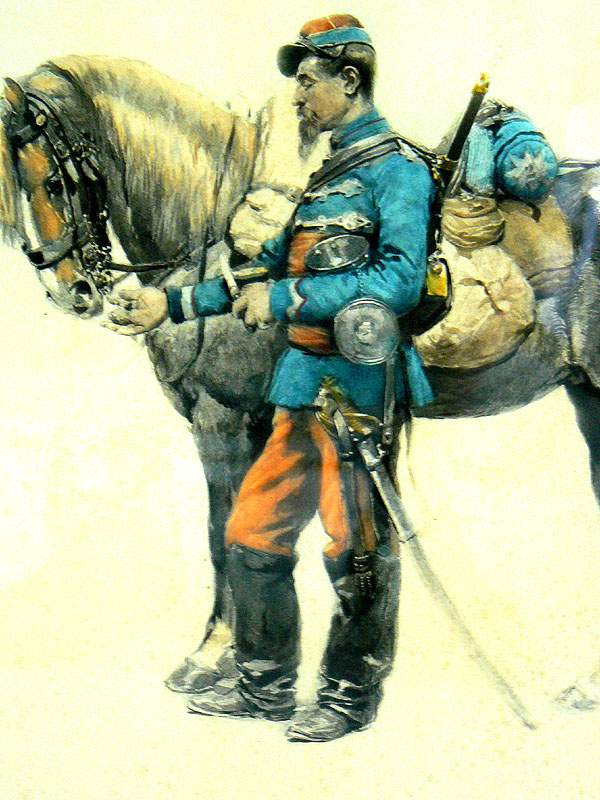 This painting is typical of Detaille’s many works
of French soldiers and his attention to detail is remarkable in its breadth. It reflects a great degree of precision,
and also his photographic accuracy. While the subject of this painting is a cavalry officer, it is the brilliant
contrast between his colors, which are seen in many of his works. This is a stylistic signature much to his own recognizance. 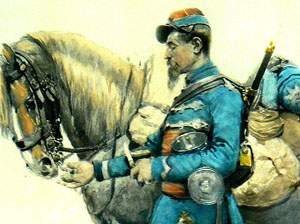 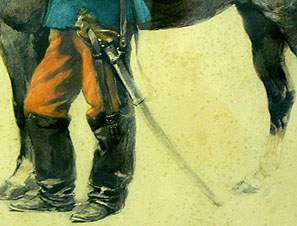 Detail of French Cavalry
Sword
CONDITION PAINTING AND FRAME: The incised wood Period
frame is original and dates to the 1860-1880’s the same as the scene. It is made from wood that was varnished. The
condition of the watercolor is excellent, but it has numerous spots of mildew (foxing) which are not a distraction. 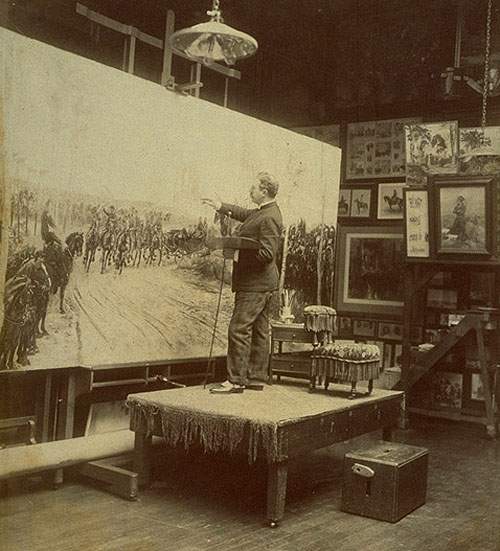 PROVENANCE: This painting was purchased at auction in August, 2009
in which it  was classified as the work of Fedrick Remington which most people recognized as being in error. We thought
the combination of the frame and subject were an outstanding match, and are happy to be able to offer it for sale. Careful
research has shown that it is typical of the style of  Édouard Detaille and this has been confirmed
by owner’s of his work and dealers who are experienced with his works. Taking all this into account we are
offering this fine watercolor at a very realistic figure for an artist whose oils regularly sell at auction from
$35,000.00 and more. The print at left is dated 1866.
ARTIST BIOGRAPHY: Jean-Baptiste-Édouard Detaille (1848-1912) 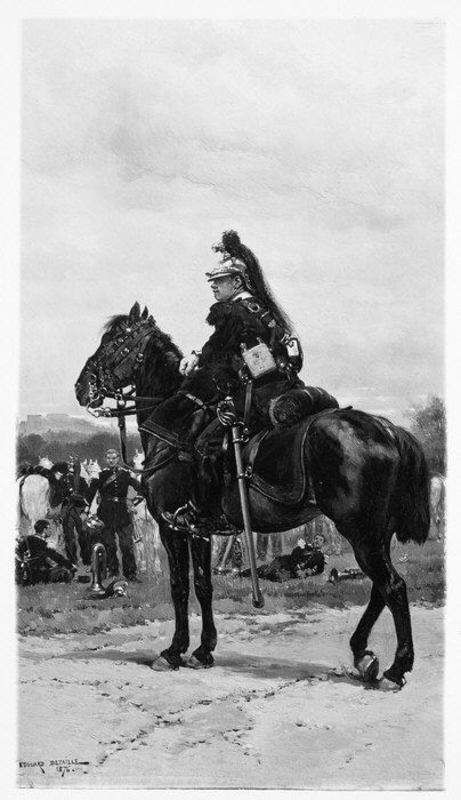 Born in Paris on 5th October, 1847, the young Detaille was surrounded by military figures
from his grandfather who had worked as a sutler responsible for organising Napoleon’s transports, to a great aunt who had
married Admiral Villeneuve. Nonetheless, his only ambition was to be an artist and he let it be known that he wished to study
with Cabanel but through various circumstances ended up in the great Meissonier’s studio. It was in 1867 that the young artist
first exhibited a picture, showing a view of Meissonier’s studio but in the following year he showed his first military piece.
While it was based solely on imagination, The Drummer’s Halt represented a scene from the French Revolution. This was to be
the beginning of a glorious career painting many military scenes from French history.

The Franco-Prussian War had a
profound effect on the artist particularly as it forced him to see war in person. On the outbreak of war he enlisted in the
8th Mobile Bataillon and by November 1870 was attached to General Ducrot’s staff seeing action in the fighting around Paris.
On the Marne he saw regiments under fire, groups of skirmishes dispatched to the front and senseless retreats. These experiences
of war enabled him to produce many striking portrayals of the actions. Indeed, in 1872, he was forced to withdraw two paintings
of the war from an exhibition so as not to offend Germany. Over the next few years, Detaille exhibited some of his finest
paintings of the conflict such as Salut aux Blesses of 1877, La Defense de Champigny of 1879 and Le Soir de Rezonville. With
de Neuville he produced two large panoramas of the battles at Champigny and Rezonville.

Now a celebrity, he travelled
extensively through Europe between 1879 and 1884, taking time only to visit Tunisia with a French expeditionary force where
he was witness to some fighting. In Britain, he painted a review of British troops by the Prince of Wales, and a scene showing
Scots Guards in Hyde Park. It was at this time that Detaille was developing a deep interest in the French army and he produced
all the drawings and plates for Jules Richard’s Types et Uniformes de l’Armee Francaise, 390 images in all. With all his work,
Detaille painted a slow and methodical way so as to produce his subjects naturally and realistically, but most important of
all, truthfully.   By the 1890’s Detaille was turning more and more to the campaign of Napoleon and he produced
many striking battle scenes including dashing cavalry charges. He used many original items of uniform and weapons to give
authenticity to his pictures, and many of these artifacts were used in the creation of the Musee de l’Armee in Paris which
Detaille helped to found.   He died in Paris on 23rd December, 1912.  Thanks to Peter Harrington
The work on the left was done in 1876.  It compares in many respects to the water
color we present here.It typifies his style and ability which are found in numerous paintings that he did of
similar scenes.