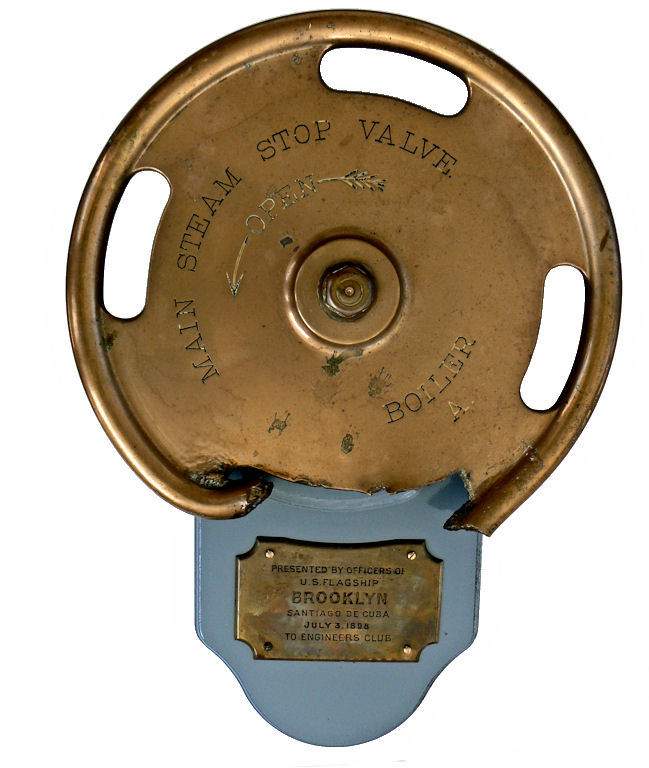 From the War Trophies of USS Brooklyn, Flagship

Presented is the main boiler bronze control valve from the U.S.S. Maine whose sinking
on February 8, 1898 in Havana Harbor was pivotal in starting the Spanish American War. The resulting explosion in the forward
ammunition locker destroyed a portion of the hand grip of the main steam boiler “A” valve. After hostilities
ended, the Fleet Flagship, USS BROOKLYN, as the flagship in the later Battle of Santiago, Cuba, likely received this relic
as a remembrance of what started the Spanish American War. The date on the plaque is that of July 3, 1898 which is the date
the entire Spanish Squadron was sunk or surrendered in the ensuing sea Battle.

Presented by Officers of
U.S. Flagship
BROOKLYN
Santiago De Cuba
July 3, 1898
to Engineers Club
The valve is prominently pictured in the photograph below
which was taken on board the USS Brooklyn, supposedly at  the shipyard in Tomkinsville, New York where she went for repairs
after the Victory Parade in 1898. The original of this photo is on in display at the Naval Museum in Portsmouth,
New Hampshire.

Also included is a copy of the book “The Maine Personal Narrative of Capt. Sigsbee”. Sigsbee
was the Maine’s captain at the time of the explosion. The book is stamped with the name E. H. Pierce who was the father
of the person who sold this relic in 2010 after it had been handed down in his family.

THE
NEW YORK ENGINEERS CLUB: There is an interesting article in the New York Times dated
2 Sept 1898 covering a Navy fleet engineers dinner at the New York Engineers Club. Present were the chief engineer of USS
Oregon who gave a speech, and the chief engineers of the ships that participated in the Battle of Santiago. The chief engineer
of the USS Brooklyn was present as well.   Although no mention is given of a valve being given by the officers of
the Brooklyn to the Club, this would have been an appropriate time to make the presentation.

In 1903, Andrew Carnegie presented the professional associations of Engineers with a donation
to fund the establishment of a professional club designed by the architects Whitfield & King and completed in 1907.
The Engineers Club was one of the first “Skyscrapers” in midtown.  The adjoining brownstones to the East and West were
purchased by the Club in 1923 and 1920 respectively. The Club’s renowned membership included Andrew Carnegie, President Herbert
C. Hoover, Thomas Edison, Brig Gen. Charles Lindbergh, Cornelius Vanderbilt, Henry Clay Frick, H. H. Westinghouse, and Nikola
Tesla. During the 19th Century, American engineers helped transform America from a largely agricultural nation to an architectural
and industrial empire, and a world power.  The club was Carnegie’s tribute to ordinary men doing extraordinary things.Bryant
Park Place stands today as an architectural link to the rich heritage and proud traditions of the nation as it came of age
in the late 19th and early 20th centuries.

THE USS MAINE was the
first Navy ship named for the state of Maine. She was a 6,682-ton second-class pre-dreadnought battleship originally designated
as Armored Cruiser #1. USS Maine and Texas (built at the same time) were unusual in that their armament was mounted en échelon,
projected off to either side (Maine’s forward turret was off to starboard and her aft turret to port; the arrangement was
reversed on Texas), following a similar design of the Brazilian battleships Riachuelo and Aquidabã. This severely limited
their ability to fire on a broadside. Maine was inferior in every way to the later Indiana-class coastal battleships and subsequent
ships.

Congress authorized her construction on August 3, 1886, and her keel was
laid down on October 17, 1888, at the Brooklyn Navy Yard. She was launched on November 18, 1889, sponsored by Miss Alice Tracey
Wilmerding (granddaughter of Navy Secretary Benjamin F. Tracy), and commissioned on September 17, 1895, under the command
of Captain Arent S. Crowninshield.

THE SINKING: The Maine spent her active career
operating along the East Coast of the United States and the Caribbean. In January 1898, the Maine was sent from Key West,
Florida, to Havana, Cuba, to protect U.S. interests during a time of local insurrection and civil disturbances. Three weeks
later, on February 15 at 9:40 p.m., an explosion on board the Maine occurred in the Havana Harbor. Later investigations revealed
that more than 5 long tons (5.1 t) of powder charges for the vessel’s 6 and 10 in (150 and 250 mm) guns had detonated, obliterating
the forward third of the ship.[8] The remaining wreckage rapidly settled to the bottom of the harbor. Most of the Maine’s
crew were sleeping or resting in the enlisted quarters in the forward part of the ship when the explosion occurred. Two hundred
and sixty-six men lost their lives as a result of the explosion or shortly thereafter, and eight more died later from injuries.
Captain Charles Sigsbee and most of the officers survived because their quarters were in the aft portion of the ship. Altogether,
there were only 89 survivors, 18 of whom were officers. On March 28, the US Naval Court of Inquiry in Key West declared that
a naval mine caused the explosion.

The explosion was a precipitating cause of the Spanish-American War that
began in April 1898. Advocates of the war used the rallying cry, “Remember the Maine! To hell with Spain!” The episode focused
national attention on the crisis in Cuba but was not cited by the William McKinley administration as a casus belli, though
it was cited by some who were already inclined to go to war with Spain over their perceived atrocities and loss of control
in Cuba.

CAUSES OF SINKING: Because of the uproar the sinking of the Maine
caused in the United States, President McKinley demanded an immediate investigation into the cause of the explosions. A U.S.
Naval Court of Inquiry arrived in Havana and began its investigation. Survivors and eyewitnesses testified for the court,
and several navy divers explored the sunken ship, hoping to find clues as to what may have caused the disaster. All parties
involved concluded without a doubt that the explosion of the forward six-inch (152 mm) ammunition magazines had caused the
sinking. Why those magazines had exploded, no one could determine conclusively, and doubt remains as to the exact cause to
this day. There have been four major investigations into the sinking since 1898. From the four inquiries, two hypotheses have
emerged: one, that a naval mine in Havana Harbor had exploded underneath the battleship, causing the explosion of the magazines;
and two, that spontaneous combustion of the coal in bunker A16 created a fire that detonated the nearby magazines.

The U.S.S. BROOKLYN was the flagship
of “Flying Squadron” under the command of Commodore Winfield Scott Schley. The USS BROOKLYN took a very active role in the
Battle of Santiago, being struck twenty times by enemy shells. Amazingly, she only suffered one man killed in the engagement.
She is credited with actions against ALMIRANTE OQUENDO, INFANTA MARIA TERESA, VISCAYA, CRISTOBAL COLON, PLUTON, FUROR at the
Battle of Santiago and ALVARADO, REINA DE LOS ANGELES, TOMAS BROOKS, MEXICO, SAN JUAN, AND MORTERO on July 17, 1898.

Background:
The USS BROOKLYN was authorized by Congress on July 19, 1892. After commissioning, BROOKLYN’s first duty was to transport
the United States’ Representatives to the Diamond Jubilee celebrations for Great Britain’s Queen Victoria. Upon BROOKLYN’s
return, she served in various locations on the East Coast and in the West Indies until being assigned as the flagship of the
“Flying Squadron” on March 28, 1898. Two months later, the squadron took up its position blockading Cuba.

On July
3, 1898, USS BROOKLYN was a key vessel in the Battle of Santiago, which resulted in the loss of the Spanish fleet in the Caribbean.
The ship’s movements at the opening of the battle, directed by Commodore Schley, created controversy. In an effort to bring
itself into position, BROOKLYN made a wide turn to starboard, away from the enemy and directly into a collision course with
the USS TEXAS. A collision was narrowly avoided, and TEXAS was forced to cut speed at a critical moment. In spite of the unqualified
success of the Flying Squadron that day, this maneuver would be discussed for years and used as evidence of Commodore Schley’s
incompetence.

After the war, USS BROOKLYN was present for the Spanish-American
War Victory Celebration at New York on October 5, 1898, and the Dewey Celebration in September 1899. On October 16, 1899,
BROOKLYN sailed for the Philippines, where she became the flagship of the Asiatic Squadron. She took part in the North China
Relief Expedition (“Boxer Rebellion”) in 1900.

In 1902, USS BROOKLYN returned
to Cuba for the ceremony of the transfer of authority from the United States to a new Cuban government. She cruised with the
North Atlantic Fleet and the European Squadron, becoming the flagship of Rear Admiral C. D. Sigsbee, the last commander of
the ill-fated USS MAINE, on June 7, 1905. Under Sigsbee, she had the honor to sail to Cherbourg, France to return the remains
of American Revolutionary War naval hero John Paul Jones to the United States.

In 1906, USS BROOKLYN was placed in reserve. She served
as a permanent display at the famous 1907 Jamestown Exposition, from where the Great White Fleet left for its world cruise.
USS BROOKLYN was decommissioned on June 23, 1908, but commissioned “in ordinary” in 1914 to serve as a receiving ship at the
Boston Naval Yard. Fully recommissioned in 1915, she served as part of the Neutrality Patrol. Late that same year she was
transferred to the Asiatic Station, where she served as flagship for the commander-in-Chief. Later she served various diplomatic
functions, as well as the flagship for the Commander of Division 1, Asian Fleet, and later of the Commander of the Destroyer
Squadron.