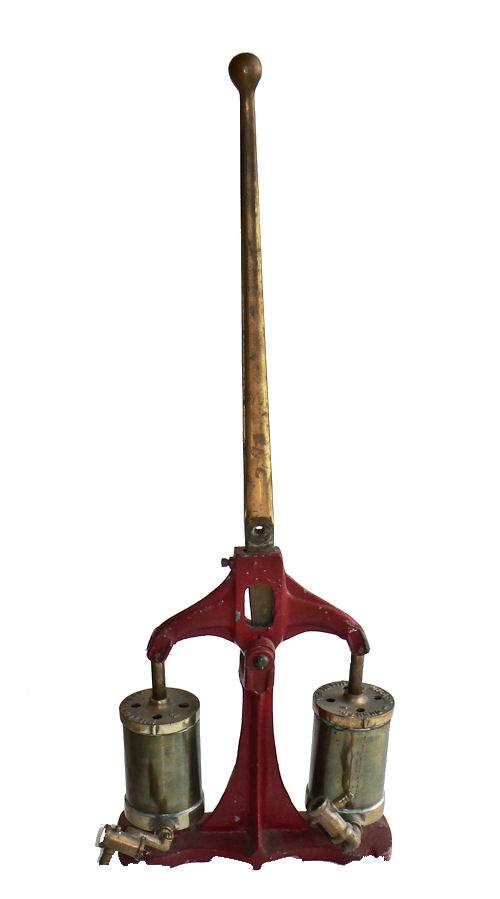 The major difference is the expensive brass cylinders and lever, and the cast iron base having twin pivot
points that allowed the cylinders to rock back and forth when the lever was moved from side-to-side. In other words, there
is no “rocking beam“ as in the 1A.

This version also has special cast brass supply and return fittings
with a barbed end standing proud while the fitting’s ends are threaded to accept a 3/4” hose on one end
and a plug on the other. Consequently, there seems to be no reason for the barbed fitting. If anyone thinks of a
reason, please let us know.

The hand hand operated Number 1 diving
pump was operated by a single person and was used in no more than thirty feet of water or one atmosphere of pressure. The cylinders
have pistons which have leather washers which provide a flow of air to the diver when the lever is exercised in
each direction. Both the lever and cylinders of this version are made of brass and the frame is iron. The iron base was fitted
to a wood platform when used. The brass work on this pump has varnish over which has darkened with age and is felt to
be original. There are special hose connectors fitted to the cylinders which may not be complete. We have rocked
the handle back and forth, but do not feel any air pressure coming out of the supply side. This may be due to the leather
washers needing to be replaced. If the pump is intended for use, this best be left to the dive shop which will certify
it ready for service.

The pump is being sold for display only and should be sent to a dive shop
for certification..

BRIEF HISTORY OF MILLER – DUNN DIVING: The Miami, FL.
company was founded around 1914 with a focus on shallow water diving using helmets and simple equipment that did not require
special training. Its first helmet of consequence, was the No 1 Divinhood first introduced around 1915 which was quickly
adopted for use in all forms of shallow water work. We have sold all versions of these helmets. The original design
was simplicity in its most fundamental sense. This was followed by the No. 2 Divinhood which became the U.S. navy’s official
shallow water diving apparatus, and was part of the ships gear on many naval vessels.
In 1939, just before the onslaught of WW II, the No. 3 Divinhood was introduced.
It was used by commercial and navy divers worldwide for shallow water work.
During the the first days of World War Two only Morse and then Schrader were
making dive helmets for the navy. DESCO and Miller-Dunn went into production around 1943 with DESCO becoming the number one
producer, and Miller-Dunn making the least. In total only about 7,000 MK V helmets were produced by all four companies during
the war years.
After the war, the need for helmets decreased dramatically due in part to the
large surplus of helmets finding there way to the salvage equipment market. The business of Miller-Dunn was adversely affected
and the company ceased operations sometime in the 1960’s.
CONDITION and MARKINGS:  Marked on cylinder
heads in relief, Miller Dunn, Miami, FL, Model 1. Except for some hose adapter parts, and a wood platform, the pump appears
to be complete and in excellent condition exclusive of it piston’s leather washers.

It
is being offered as a display item only, and should not be used for any other purpose unless certified by a competent diving
shop. 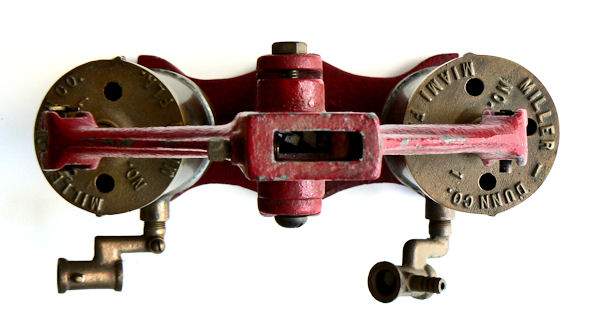 A great addition to a dive collection or to be put back in service after inspection by a certified
dive shop.