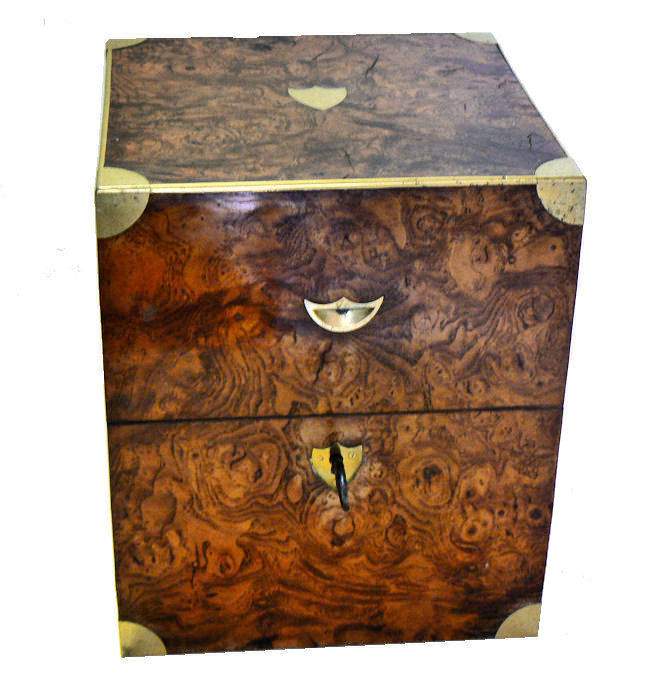 Presented is an exquisitely made French Walnut burled
wood campaign decanter box with four glass decanters. The case has brass corners and inset campaign handles
of the highest quality brass work. There is a brass escutcheon (heraldic shield) inlaid in the hinged top. There are
four numbered compartments, all lined with red and gold tooled leather. We believe the glass was hand blown into a mold.DIMENSIONS:
Case 8“ square x 9 1/4“ H One bottle 2 3/4“ square x 71/2” H
Weight
10 lbs 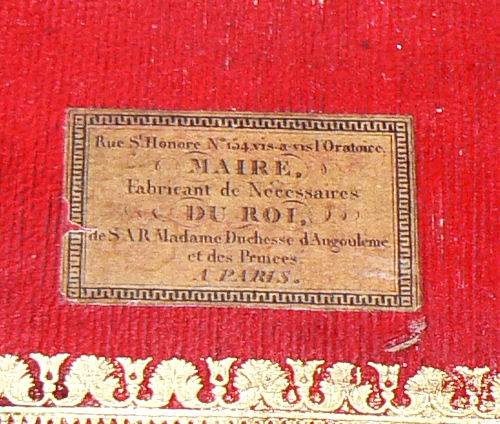 PROVENANCE: The set was originally sold by a dealer on the famous and historic street, Rue St. Honore, which dates
back to the 13th Century. The building next door No. 155, was the first “Café de la Regence”, and in 1815 was the scene at the beginning of the Restoration, where
clashes between officers and demobilized Napoleonic royalist officers took place. Today the street is home
to the most fashionable of shops such as Channel, Hermes, and Bulgari, and many restaurants.

Translating its
label, the name MAIRE means Mayor and likely was the name of the shop. The rest of the label in English tells us they
were located at number 154 and were across the street from number 10, The Oratore, and they were manufacturers of
necessities to the King, HRH Duchess of Angouleme, and the crown princes.

TIME
LINE: Our interpretation of the label is that the King refers to Louis XVI whose daughter, Marie Terresa, (December
1778 – October 1851) became Duchess of Angouleme upon her marriage to the Duke, Louis Antoine, in
June, 1799. Because of the Revolution, Napoleon’s rise to power, his exile and return, and the exiles of the royal family, and
the Restoration of the Bourbon Rule, and finally the forming of the Republics of which there were three, we can only surmise
that the set was made before 1831 and as early as 1800. Her husband reigned for 30 minutes as Louis XIX of France and
she as his queen in 1830. Much of the rest of her life was spent in exile. SAR refers to the Son Altesse Royale.

The
label in English reads: