Presented is the only known example
in the world of a Schermuly Line Throwing Apparatus as a complete kit. Even Britain’s National Maritime Museum does
not have an example. This is of WW II vintage and is exactly like the Schermuly’s gun that is on display
at London’s National Maritime Museum. This gun is complete in all respects with all parts in working condition, but the
firing pin has a stop fitted, and needs the attention of a gunsmith. Except for some missing paint on the outside of
the barrel, and some slight rust inside the barrel it is in overall “Fine” condition.

It also comes with its
original wood carrying case, with two coils of line in their separate compartments, three authentic rockets, and a can of
six cartridges.

We have been selling these guns fo seven years and know of no other complete
kit ever being offered. 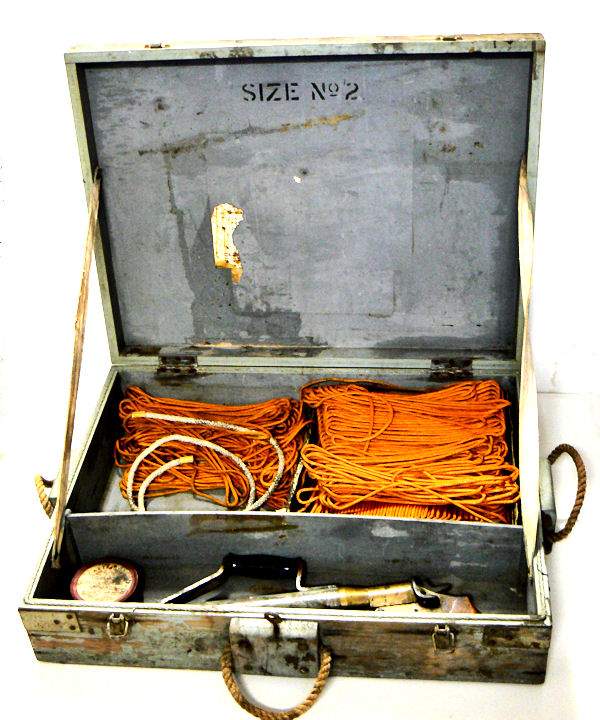 BRIEF HISTORY: The Schermuly founder was William Schermuly
1857-1929. He was one of the fathers of modern rocketry. Although William started the business and developed many ideas,
it was his third son Alfred James Schermuly, the actual family pyrotechnist, who invented and put into production this
particular Line gun. Produced during the 1920’s and highly successful for the throwing of line from shore to ship, or ship
to ship. The Schermuly system saved countless lives at sea. The example offered is a classic of this type of line throwing
gun. It is of brass, and steel construction with walnut grips. SPRA is an acronym for Schermuly’s Pistol Rocket
Apparatus. The photo at left is from the Schermuly catalog.
This
device is being sold for display purposes only. The black powder that was used as a propellant was discontinued in 1952, and
the powder available today is much to powerful for safe use.

Length if barrel
13 1/2″            Diameter
of barrel                 1 3/4″
Length Overall
20″            Length of pistol
section          6 1/2″
Size of case 28″ L x 21″ D x 6 1/2″ H
Total weight 29 1/2 pounds
The markings on the gun are:
On obverse side: 15708
On the obverse chamber: 15708
On the reverse of the frame:
SCHERMULY’S
PAT No. 50505324   P
SI
Maker’s Decal on case
SPRA is an acronym for Schermuly’s Pistol Rocket Apparatus
National Maritime Museum’s Description: Line-throwing pistol consisting of a long barrel with pistol grip and trigger which fires a
short blank cartridge. The cartridge is loaded into the breech of the pistol and the rocket is inserted into the muzzle. On
pulling the trigger, the gases generated by the fired cartridge eject the rocket on its correct line of flight, and at the
same time, burst through the waterproof disc and ignite the propellant mixture, which carries the rocket and line on the remainder
of the flight. The rocket (which is missing) consists of a weldless steel case filled with propellant mixture sealed in by
a waterproof disc. Fixed to the rocket case is a direction bridle, to the end of which a short length of flexible steel wire
is attached, this in turn being connected to the end of the line to be thrown. The number ‘503324’ and the serial number ‘585’
are stamped on the pistol. 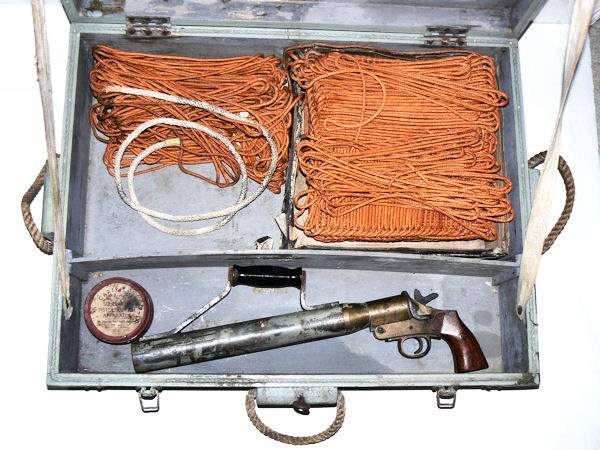 A ship is foundering off the coast – lives are at
risk, crewmen must be rescued.  That job falls to the surf men of the U.S. Coast Guard, and prior to 1915, to its predecessor,
the U.S. Life-Saving Service.  In situations where the stricken vessel is within a few hundreds yards from shore, it
is possible to effect a rescue without putting a rescue craft in the water and needlessly risking the lives of the rescuers.
In such cases, a line is launched from shore to the vessel.  Today a rocket fires that line.  Prior to 1952, a small
cannon, a line-throwing gun, was used.

A line-throwing gun is a short-barreled cannon designed to
fire a projectile attached to a rope to a boat or victim in distress.  Experiments in shooting tethered projectiles dates
back to around 1800.  A mortar device was credited with saving lives in 1850.  But it wasn’t until West Point and
MIT graduate Army Captain David A. Lyle (1845 – 1937) began his research and testing that resulted in reliable efficient designs.

Thus line-throwing guns are most often referred to as “Lyle
Guns.”   The U.S. government funded many line throwing gun projects.   There were about 30 companies who
made line-throwing guns from the late 1800’s to 1952.  Famous names included, American Manufacturing, Galbraith, General
Ordnance, Naval Company, Sculler and Steward.  Production ceased in 1952 in favor of rockets.

These line guns are used primarily for shore based rescue
operations.  The shooter would fire, aiming over the victims’ heads and then pull the line within reach of the victims.
They are also useful for rescuing victims that have fallen through the ice, or are stranded on a cliff or burning building.

Boats in distress need larger lines.  Lyle guns were
designed to throw projectiles weighing approximately 18 pounds, carrying heavier rope to ranges as great as 700 yards.
Once the line was fired to the ship, shore crews sent out breeches buoy equipment and instructions to the stranded sailors.
Once the breeches buoy lines were assembled, the sailors could be removed from the vessel.

Standard procedure was for line throwing guns and breeches buoys to be used for wrecks
within 600 yards of the shore; rescues at greater distances were to be accomplished by lifeboats.