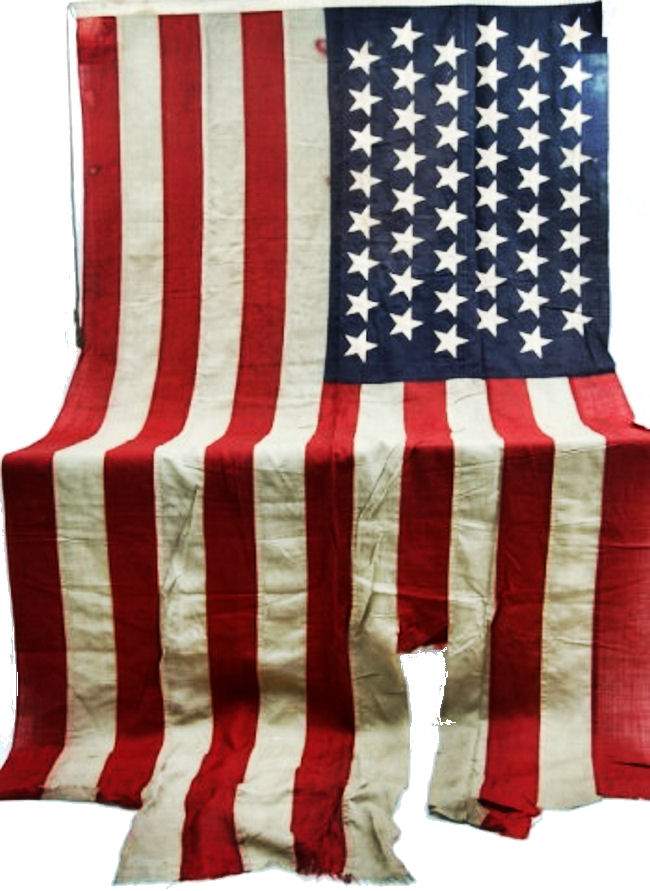 Presented
is a hand stitched official 48 vs. 45 Star, U.S. Navy Ensign that was made in the naval shipyard in Cavite, Manila Bay,
Philippines following the Battle of Manila Bay. The reason for it being made as a 48 Star flag rather than the official 45
Star flag has been lost to the vagaries of history.

This flag was carried
by the USS Boston on the return of the fleet to the United States in 1899 and was obtained by Colonel William T.
Carpenter, Coastal Artillery Corps, at the Mare Island Naval Shipyard in 1902 along with many other of the flags which
were flown by Dewey’s flotilla in the Battle of Manila Bay in 1898. The cruiser, USS Boston, was one of the 6 warships in
Dewey’s battle fleet. An original brown ink tag with this history is attached to the hoist. Carpenter was in his twenties
at the time and later became a noted collector.=LEFT>

PROVENANCE: This flag comes from a group of about twenty flags by
direct decent of Carpenter through the family to the first holder. Approximately, twenty years ago the first
holder died and his estate hired an antique military consultant to value the flags and to find a buyer.
All the flags at that time were piled in one box. The consultant then arranged a sale from the first holder to
a person in Virginia. Over a period of time the last owner sold the best of these flags, which found their
way to market, at prices up to $15,000.00 by private treaty. Two noteworthy sales were the 45 Star Ensign flown by the
USS Boston at the Battle of Manila Bay, and a Hawaiian flag. The remaining flags were later sold at auction. The consultant
of the Carpenter Estate remembers this 48 star Ensign number 5. He thinks its “sweet” and very rare since
it is one of the first, to have come from the Cavite Bay Navy Yard, it’s hand sewn workmanship being exemplary
and the 48 stars making it even more desirable. His word in describing the 48 stars is “enigmatic”.

The consultant posed two possibilities of having 48 vs. 45 stars. After inspecting them again,
there is no way to tell if stars were added because there is a normal irregularity throughout their placement. The hand stitching
all appears to be the same. My contact says there is no question about the flags authenticity, and he certainly is familiar
with the Carpenter tags which appear on many, of those that he recalls.

NATIONALLY RECOGNIZED FLAG AUTHORITY
studied this flag in detail and issued a Letter of Authentication which says
in part and is abbreviated here, There is no question this flag was made by the U.S. Navy to its specs.  In addition
to the odd 48 stars, the star pattern is that of staggered rows, an uncommon, but not unknown variant of the official pattern
of even rows signed into law by President Taft on June 30, 1912.  As to the number of stars, it was not unusual at the
time for flags to be reworked to have the correct number and pattern on successive dates as the changes were introduced. Reference
is made to news paper articles of 1896 and in 1912.

In conclusion, the flag expert says, I believe this flags inscriptions are all truthful, that it was
made in 1900, and acquired in 1902, but  that Carpenter had the flag reworked, most likely in 1910.

This
expert, among his numerous qualifications has been a vexolillologist since 1966,  is a past president
of the North American Vexillological Association (1998-2004), and a published author of numerous professional articles and
a recognized authority in this field. A Copy of his letter and the supporting documents will accompany the flag.

The
45 star flag was authorized from 1896 when Utah entered the Union until 1907, when Oklahoma became the
46th State. This period included hostilities with Spain during the Spanish-American War of 1898 and Teddy Roosevelt’s
famous “Great White Fleet” World Tour of 1908-1909. This era was of historic and patriotic
significance.

The 46 Star Flag: In
1908, the addition of Oklahoma to the Union, brought the total number of stars to 46. There
were thirteen stripes representing the thirteen original colonies.

The 48 Star Flag: On July 4,1912, the U.S. flag increased to 48 stars with the addition
of New Mexico (January 6th, 1912) and Arizona (February 14, 1912). Executive Order of President Taft dated
June 24, 1912 – established the proportions of the flag and provided for arrangement of the stars in six horizontal rows of
eight each, a single point of each star to be upward. This flag was official for 47 years.

MOUNTING: The
flag can be folded, shingled in such away, as to shorten the length to whatever is desired. It is worthy of
being framed under glass using archival procedures which is best done at its new location to fit the preferences of the new
owner.

CONSTRUCTION: The tabling
is stamped “U.S. Ensign No. 5 Navy Yard, Cavite, June 13, 1900. The flag is entirely hand-sewn,
and constructed of wool bunting with cotton muslin, double mounted, stars. There is a tabling on the hoist covering
a braided rope tail line with a bight at the top and a wood toggle at the bottom. Hence, there is no need for grommets. The
stars, with points up, are arranged in 6 rows of 8.