(1801-1870). American naval Admiral and veteran
of various wars, who uttered the famous phrase “Damn the torpedoes!” while a flag commander in the Gulf of Mexico during the
Civil War. He was the first American Navy officer to hold the rank of Admiral. ALS “D.
G. Farragut,” 2pp on single sheet, 7¼”x12″ 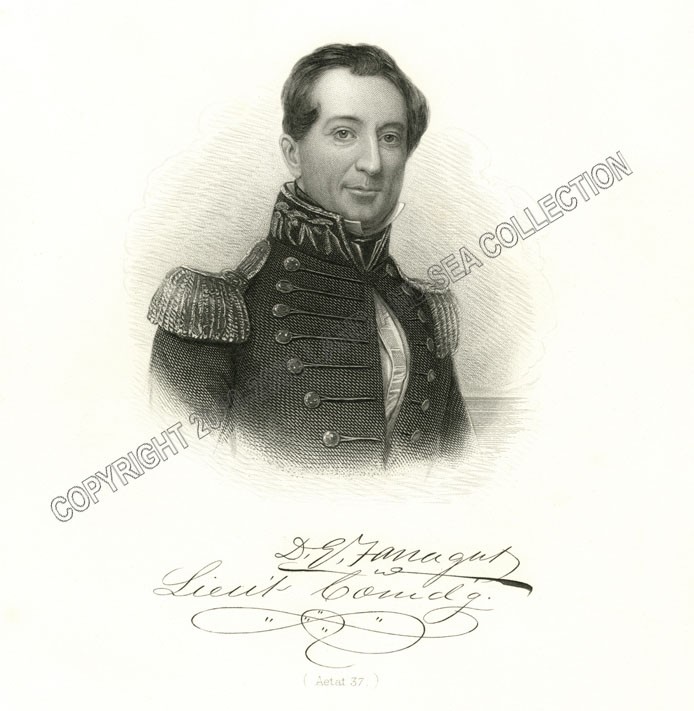 Presented is a letter from then Captain  Farragut writing
to the Secretary of the Navy, Isaac Toucey. It is on blue stationery. As captain of the US Steam Sloop Brooklyn, Farragut requests his first lieutenant (executive officer) be transferred,
a very unusual request.

The frustrated captain writes in part, “As
the Department has been pleased to grant me one favor in ordering some Passed and other Midshipmen in the place of Masters
Mates, I am induced to hope that it may be disposed to grant me another Boon, of still greater importance to me, personally,
as well as to the service. It is to withdraw my 1st Lieut; or exchange him, either will suit me. I have borne with Lieut.
Doyle perhaps as long or longer than any one else would have done without having made this effort to get rid of him, but I
deem it my duty to bear with the infirmities of others as long as possible, particularly as I considered there has been strong
feeling in relation to the Retired Officers. But, Lieut. Doyle does not possess the first requisite for an Executive Officer,
he has neither the information or the industry necessary for the position and at my time of life to have these duties forced
upon me, is perhaps more than I am able to bear. The disorganizing effect of having an Exc. Officer whom every officer on
board feels himself vastly his superior in professional qualifications, is of itself destructive to the discipline of the
ship…”

Farragut does not wish to resort to any charges that would further injure his Lieutenant than his
transfer, but suggests one of his six lieutenants if “not considered too young
I will be well satisfied to have no other change made, but if the Dept. thinks it consistent with its regulations to leave
Mr. Smith as Executive Officer I am ready to receive almost any other officer. If my request can be granted I shall feel most
grateful…”

ACCOMPANYING THE LETTER ARE: A very nice Appleton steel engraving
as admiral removed from a book, three Farragut commemorative postage stamps and certificate of authenticity. The image in the listings Farragut as a LCDR at age 37. Copies are available by separate order.
See https://landandseacollection.com/id648.html