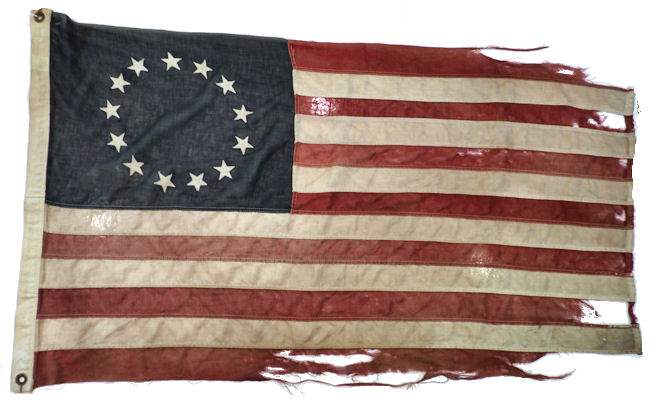 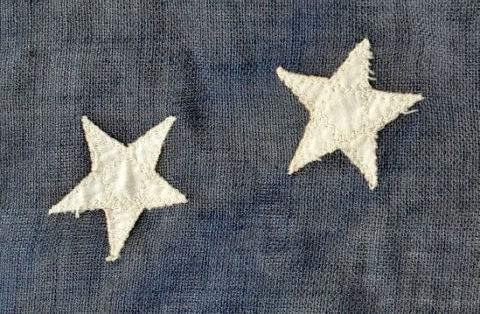 Presented is a 29” x 49”, cotton
bunting, machine sewn, US, 13 star flag with zig-zag stars, handed down from the estate of Colonel William T. Carpenter to
two prior holders. Carpenter was an engineer who served with distinction in the US Coast Artillery. His duties took him
all over the globe to construct and inspect coastal artillery installations in many of the far flung possessions of the US after the Spanish-American
War. He became well known as a collector since he amassed an eclectic flag collection as mementos of his adventures. Two
stand out examples, are the Royal Hawaiian flag which is in a private collection there and the 45 Star Ensign flown
by the USS Boston in the Battle of Manila Bay which is in a New York collection.

The star field
is arranged in the commemorative “Betsy Ross” pattern, a design that was popularized during the US Centennial Celebrations
in 1876, and sometimes, if unofficially, it is used in lieu of the US Yacht Ensign, as a private ensign on yachts and pleasure
boats.

The exact use of this ensign is unknown, but its well worn
condition shows the strenuous use to which it it was put before becoming part of his collection. The upper and lower stripe, and tail are tattered and there is
some holing. There are no markings. Mounted and framed, it would make a handsome display – telling the story
of a serving officer in the expanding US military as we became a world power in the early 20th Century. It also combines the heritage of the Betsy Ross
design with that of our seagoing heritage.

CONDITION:  The upper and lower stripe, and tail are tattered and there
is some holing with the largest being in the canton. There are no markings. The star pattern has a decided
slant to it forming an ellipse which is the result of wind induced stretching as evidenced by the bagginess in the canton.

PROVENANCE: This flag comes from a group of about twenty flags by
direct decent of Carpenter through the family to the first holder. Approximately, twenty years ago the first
holder died, and his estate hired a consultant to value the flags and to find a buyer. All the flags at that time were piled
in one box. The consultant then arranged a sale from the first holder to a person in Virginia. Over a
period time the last owner sold the best of these flags, which found their way to market, at prices up to $15,000.00
by private treaty. Two noteworthy sales were the 45 Star Ensign flown by the USS Boston at the Battle of Manila
Bay, and a Royal Hawaiian flag. The remaining flags were more recently sold at auction. The consultant of the
Carpenter Estate remembers this 13 star flag as a member of the group, but there is no documentation supporting that.

BRIEF HISTORY OF BOTH DESIGNS: The US Yacht Ensign was created in 1848 as a private signal for yachts; however it has become the custom for
it to be worn by private “yachts” and pleasure craft. It was never intended fro use by vessels in commission.
However, there, have been some documented exceptions – during the American Civil War – of its use as a small boat
flag. The flag has no standing internationally, it being intended for domestic use only. However, in 1939 the Secretary
of the Navy directed that it will be saluted by US Naval Personnel as appropriate to the National Ensign, if flown in its
stead; so for the purpose of US protocol it ranks as a national flag, but subservient to the national flag in any historical
display. Since the 1980’s the flag no longer has any legal standing and is flown by custom only.

MOUNTING: It is
worthy of being framed under glass using archival procedures which is best done at its new location to fit the preferences
of the new owner.

CONSTRUCTION: There are no marking on the flag or grommets. It is entirely
machine sewn, and constructed of cotton bunting, with double appliqué’ stars. There is a canvas heading on
the hoist.