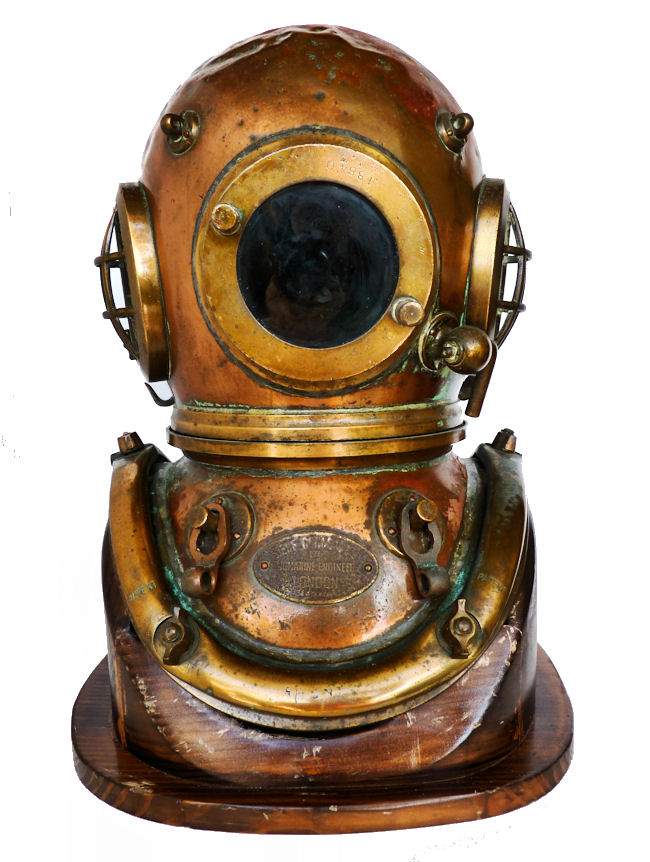 In 1840, August Siebe invented the deep sea diving helmet
as we know it today.  Royal Navy Admiralty pattern helmets are particularly prized by collectors and divers
making this helmet with its very special provenance and two owner’s tags a find.

Copyright 2011 by Land And Sea Collection™, All
Rights Reserved

Presented is
a Royal Navy Admiralty Pattern 6 bolt, 3 light Siebe.Gorman helmet, Circa 1960, that comes from the collection of the
former owner of a deep sea saturation diving company whose abbreviated resume is below. It was purchased by him
in 1979 from
Star Offshore, a dive company which did offshore and civil work up and down the BritishCoast and North
Sea. It has been in his possession for the past 31 years. The helmet has two very distinctive plates on the
back of the helmet with the same number showing that at one time it belonged to a DUTCH diving company that worked worldwide.
The helmet is unique in this configuration by not having a communication elbow. Commercial diver’s preferred using hand signals
by rope.

ANALYSIS: All factory 6 bolts were built to Admiralty specifications which included a
speaker in the bonnet which required a communication elbow at the rear. This one clearly came from SG without communication,
i.e. an elbow or speaker. Therefore, we believe that it was originally made for the Dutch diving company, its first
owner. Back then commercial divers preferred rope signals rather than a speaker. It follows that when they got it they put
their own tags on. The non matching helmet numbers are likely due to a mistake their shop made which places this
helmet in a class of its own because of the lack of comms and the special Dutch tags.

PROVENANCE:
From the collection of a USMC 1st Force Recon veteran, who after serving two tours in Vietnam,
and five years service, began a diving career that spanned four continents, and 20 years underwater experience before
becoming  a manager. The next years were spent as Oceaneering Manager of the Deep Diving Bell and Saturation
Systems for a large diving company.

In 1981, he founded his own deep saturation diving company specializing in 300+ meter / 12 man / split level operations
serving the needs of such companies as PETROBRAS. His company holds the longest running safety track record in the world for deep diving operations to
300 meters having performed more than twenty years of safe diving operations without a FATAL ACCIDENT. The dive support vessel
(DSV) “Toisa Sentinel” under his supervision has performed more than 4000 saturation dives in deep water
to 300 meters without a fatal accident as well.

One of his personal engagements during this period was with a
US Nuclear Submarine Operations scientist in Russia where they performed confidential shallow water work off the coast
of Murmansk inside the Arctic Circle. Murmansk was a central base of the Soviet Nuclear Submarine Fleet during the Cold War.  Private
operations were also conducted near the naval base of Severomorsk which today is still the headquarters of the Russian
Northern Fleet

In 1994 his company mobilized  another vessel with a 22 man split level saturation system on the
Support Vessel Toisa Sentinel. His crew on the DSV Toisa Sentinel had been operating continuously performing 24 hour
day, deep diving operation for Petrobras from 1994 until 2011.

Selling
his dive company in 2001, he continued with them until 2005, at which time he began a saturation diving consulting business
in which he is active today.

Like all used diving gear, this is being sold for DISPLAY ONLY. It should
not be dived without having passed inspection by a certified dive shop.

CONDITION and MARKINGS:
The helmet was polished and lacquered some time ago, and in places the coating has degraded and has small areas of flaking.
There are remnants of dried polish which adds an interesting contrast to the golden patina of age. The front port removes,
but the spit cock handle doesn’t turn. The air passages inside are intact and the relief valve works. The top of
the bonnet has some dents on the right side. There are other marks of use elsewhere. There is no communication elbow which
is likely how this helmet was ordered.

The heavily worn  maker’s tag, is pitted by
corrosion, and reads Siebe Gorman & Co. Ltd., Submarine Engineers, London, Patent. “Front” and “Patent”
appear in two places on the front bails Both brails are marked 18840 underneath which is the same number that is on the breast
plate neck ring and the front port’s bezel. The bonnet has number 18137 stamped on the inside back neck ring.
The two inventory tags are both numbered 1610101 indicating this helmet was married together while in the possession
of the Dutch Diving Company.

The spit cock and front door open. There is a telephone elbow on the back with
a large size hex cap marked “telephone”. All the port lights are in excellent original condition. There are no dents
on this helmet which only attest to being in a private collection all these years.

SCROLL DOWN FOR GALLERY PHOTOS!

BRIEF HISTORY: Augustus Siebe the German-born founder of the firm which bears his
name (1788-1872) is considered “the father of diving”. Siebe’s ‘closed’ diving helmet, first produced in
1840, allowed divers to dive safely to greater depths than ever before. Attached to a rubber suit, it became the ‘Standard
Dress’ that revolutionized diving and made the underwater worker an essential part of both salvage operations and civil engineering.
Many of the great building projects of the Victorian era – bridges, tunnels and lighthouses still in use today – could not
have been built without divers.
Siebe’s design was so successful that it remained in use, essentially unchanged,
until 1975. However, the Royal Navy required one of their own design, and the British Admiralty requested a helmet
made to their specifications which used heavier materials in 1938. This was the Royal Navy six bolt helmet, as seen
in this offering. The rest of the “Jake” was standard commercial equipment, except for the front weight which had a light
fitted to it, to aid the diver. The chest weights weigh about 40lbs. each and are tied down to stop the helmet rising from
the diver’s shoulders. The weights are hung from weight hangers on the front of the breast plate.

The  Royal  Navy set  out   to  extend
the limits of deep diving and established a world depth record, in 1948, of 540-feet wearing a Siebe Gorman helmet
of this design, but incorporating  a Davis Injector system, flexible dress, and  used the  fast dwindling
supplies of  American Lend-Lease helium. Petty-Officer Bollard set the depth record that was to last eight years.
Not until 1956 would the baton pass to another.

In October of that year, Senior Commissioned Boatswain George
Wookey, descended to a depth of 600-feet, setting record for a helmeted diver wearing flexible dress that still stands.