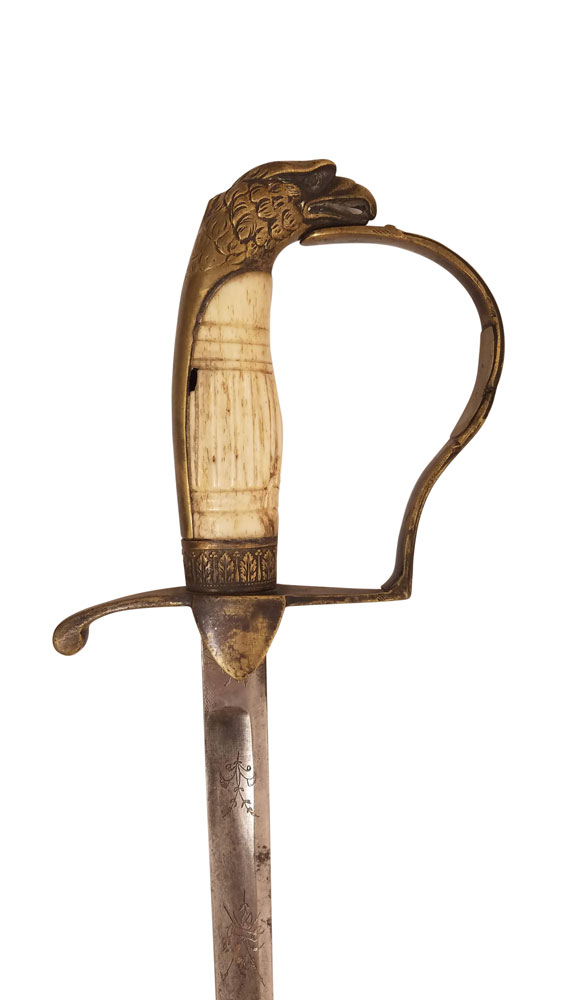 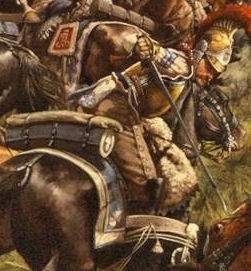 Presented is a straight eagle head officer’s sword that is decidedly of French origin. Its straight blade
suggests it may be an infantry officers sword, but it may also have been used by an officer of the mounted
artillery. There  what appears to be engraving under the obverse langet which
may be S. H. J. or F.
MAKER’S MARK SHF is the mark for Simon Helvig and
Fils who was active in the Alsace region of France from about 1820 – 1840. Reportedly, he exported many swords to the U.S.
for sale by his agents. His mark was traditionally placed under the langet so the likelihood is that this firm was the
maker.Other than that, there are no other maker’s marks. Whatever gilding was on the hilt has worn off completely.
The prominent lion’s head or Medusa on the langet dates from the French First Empire.The hilt has an Eagle head pommel and stirrup guard both of which are unusual
for a French sword as is its bone grip. However, the authoritative book, “American Swords from the Collection
of Phillip Medicus“ by Norm Flayderman and Stuart Mowbray discusses two near exact matches to
this sword on page 100, Item 46b and 46c attributing 46b to French manufacture. Combined they have a similar bone
grip, forward facing quillion with rosette, Medusa langet, embellished ferrule, hip on the head for tang, and curved
stirrup guard. 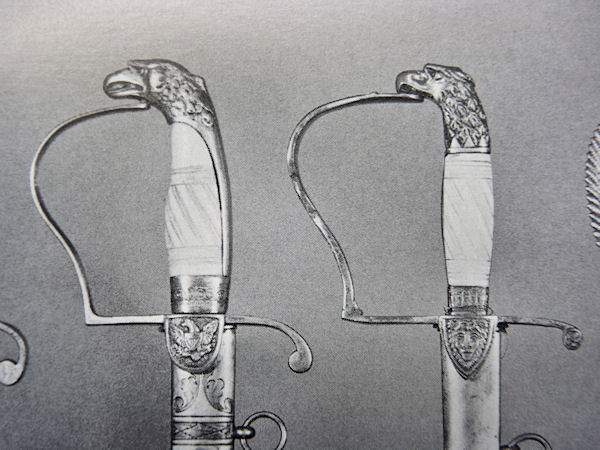 Plate 46b alongside plate 46c from the

And, the definitive work by Lhoste on this topic, Les Sabres Portes par L’Arme’e Francaise”, shows
a few examples of each. That said, there are contra-indicators which make it imposible for us to classify the sword’s origin with certainty. 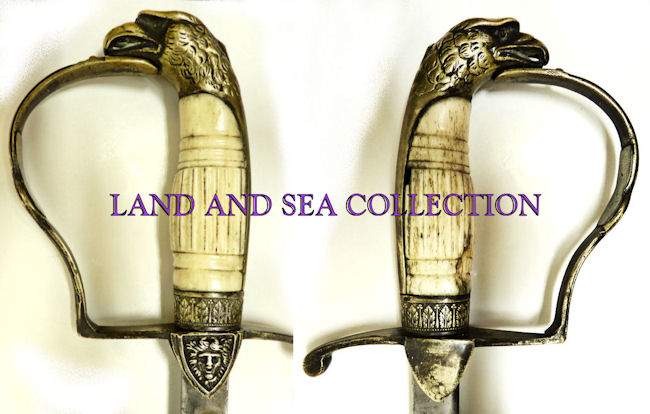 Masterful
Eagle Head with Lion Langet and bone grip An
example of the eagle head on this sword is pictured and discussed on page 102, image 116a, in “Les Sabres
Portes par L’Arme’e Francaise” by Lhoste and Resek.

THE HILT: The eagle head is well formed with a slight dip to its crown just above
the eyes and its main blends into the backstrap. The round tang comes through a flat ledge at the turn of the neck. The ferrule
is quite wide with a series of stalks and leaves. There is a star in the forward facing upper quillion which leads to the
Langet which has a lion’s head with prominent main. The cross guard then becomes a stirrup guard which is embellished
with ornate designs. There is no obvious crack at the low point of the guard, but a 1 ¼” stiffener has been added on
the inside. The stirrup guard is a common American shape and unusual for a French sword.

Details of engraved
blade with engraving under the Langet

THE BLADE: The blade with a false edge and has a single 15” x ½” wide
fuller. It was likely at one time blued and gilded, but none of this is remaining. It is straight and simple with no maker’s mark. The main design on the obverse is a kettle drum
and horn with simple flower and leafs above. The main design on the reverse is a cannon with crossed spears, with a wreath
and flower above, none of which are American. There is engraving beneath the langets on both sides which makes the blade
more than likely from Solingen. The blade is slightly loose in the hilt.

THE SCABBARD: The sword came with a very ornate scabbard that is not original to it and
is most likely from the Knights of Pythias Society. We are including it without assigning any value. There is a
clip missing from inside the scabbard which would keep the blade from moving. It is missing and may have fallen
to the bottom. The large, very ornate drag and the “UR” are seen on some Knights of Pythias’ Society swords.

Scabbard 29“ without the drag
Heraldic Symbols on this Scabbard
Axe- execution of military duty
An open book – an indication
of devotion to duty
Flowers – in general – hope and joy
Lily – purity
Two right hands co-joined represent union and alliance Lance or javelin – perfection of martial affairs; emblem of knightly
service; devotion to honour All swords and edged weapons – justice and military honor