Presented is an Ames, Civil War, M1860 dated
1861 cutlass that is a near perfect example of this most desirable collector’s sea service edged weapon with its original
scabbard and throg. In this condition, it is a very rare find, particularly when most of these cutlasses are
either missing their scabbard or are being sold with one that is a replica. The condition of the scabbard is excellent.
It has the expected marks of age, but there are no breaks or deep cracks. The 43 copper rivets, one larger at the tip,
running down the back are all original as is the front stud. The knuckle bow has a flange which accepts
an elliptical brass cup which acts as a hand guard. The curved guard is riveted to the flange and forms
a solid half basket guard. The guard, grip, leather covering, and wire wrap are near perfect as is the blade except at
the point where there is some minor pitting. 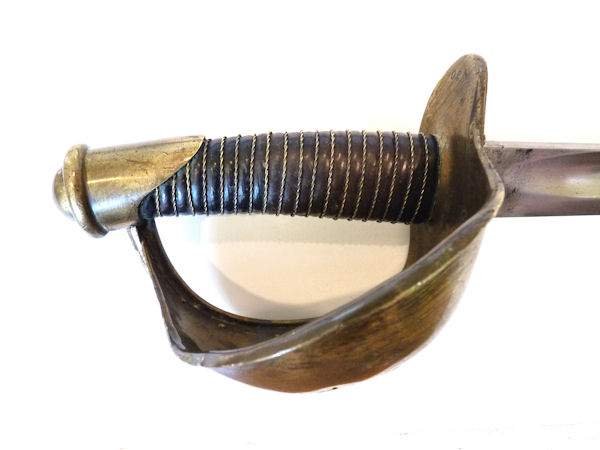 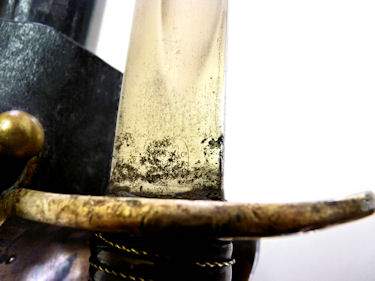 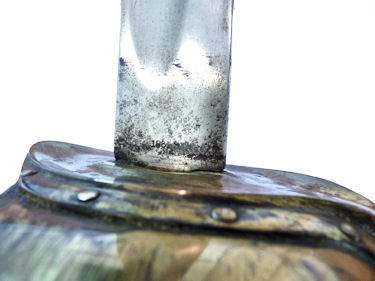 1861
date
MARKINGS: All are heavily worn. On the obverse is the Ames
Mfg Co. with Chicopee on three lines within a scroll. On the reverse there is the 1861
date on the ricasso, and on the back of the guard at the top is the number 520. CONDITION: The entire hilt assembly, guard and grip are in excellent
condition with only superficial marks of age over the past 150 years. The grip is wrapped in two strand copper wire.
The original varnish is mostly present with streaks due to aging. A patina has turned the brass golden. The
hilt and blade are tight. The leather washer is missing.

The scabbard is complete and has the original
throg which is a rarity. Both are impossible to find if missing. The blade is good condition except on
the ricasso and at the point where there is some blackening and pitting on both sides.the tip. The rest of the blade
is bright and shows light buffing with only a few a few dark spots, and only superficial pitting at both
ends.

Original throg and correctly riveted scabbard
with no shrinkage.

This is a complete example of an Ames, Civil War Cutlass and it would
be hard
to find a comparable duplicate! 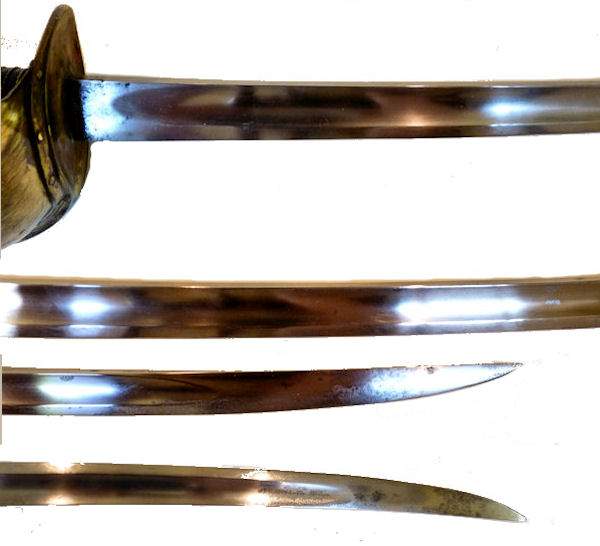 The blade in excellent condition with only minor spotting and pitting From the Chief of Naval Personnel
Public Affairs WASHINGTON (NNS) The chief of naval operations approved a number of uniform changes as announced
in NAVADMIN 118/10 March 31. Included in the announcement is the approval of a Chief Petty Officer (CPO) Ceremonial Cutlass
for optional wear by E-7 through E-9s. Chief petty officers are authorized to wear the cutlass in full dress uniforms when
acting as a member of an official party during a ceremony. However to ensure uniformity, all members of the official party
must wear either the cutlass or the sword. Because this is an optional uniform article, Sailors are responsible for the cost
of the item. Additional details on the final design and manner of wear of the cutlass will be released in a future Navy message.

BRIEF HISTORY Ames Mfg. Co.: The Ames Manufacturing Company, Chicopee, Massachusetts, was founded
in 1832 by James Tyler Ames and his brother, Nathan Peabody Ames. The company manufactured small tools, cotton machinery,
swords, cannons, and did casting of bells. They started production of military contract swords in 1832 with the M1832
foot artillery sword, and ended with the M1906 cavalry saber in 1906. Ames produced more swords for the American military
than any other company before or since, totaling over 200,000 swords in service by the end of the Civil War. In that time,
at least ten different manufacturing marks were used on the swords. A little knowledge of the company history helps place
a date range for when each stamp was used. When the company started producing swords it was led by Nathan P. Ames, and most
marks reflected that fact. In 1847, Nathan died and left the company to his brother James. The markings on the blades were
immediately changed from N.P. Ames to Ames Mfg. Co. In 1848, the town of Cabotville was incorporated into Chicopee, Massachusetts,
and the marks were once again changed to reflect this. Blades dated as late as 1850 may still bear the Cabotville
stamp, as the old dies were probably used until they were worn out. In a much reduced state, they are still in business today.

The Model 1860 cutlass which replaced the Model 1841 saw service during the Civil
War, and through the Spanish American War. They likely were used during the early days of World War I.
Based on company records, 22,000 of them were made for the Navy and 300 for the Army by  Ames in two Massachusetts
plants. The design for this cutlass was copied from the French naval cutlass used from before 1800 when boarding of enemy
vessels was common place. The French affectionately called it “Cuillere-a-pot” (the soup ladle) and the comparison is
obvious. Mostly, from an essay by Mike McWatters