Never Used
Since 1974 ~ 5+ STARS
Presented is a brand new Navy MK III sextant made
by a hereto-for unknown manufacturer of Navy sextants. Our records show that M. Low of New York started making these instruments
as early as 1970. As commonly believed, Scientific Instruments of Milwaukee, Wisconsin whose business dates back to about
1957 may or may not have been the second Navy contractor. That honor might belong to Franklin Instruments which made this
sextant on November 1, 1974 shortly after they started in business. However, even though t hey are still operating making electronic clocks, their founder and his son are both deceased, and their
present management did not respond to our request for information
about their prior sextant business.
The
sextant comes complete with all its original accessories which include a sighting ring, brush, an adjustment wrench and a
spare index mirror, all housed in a a Mahogany case that is finished with C. Plath hardware.
SOME BACKGROUND: A few years after the design of this sextant was adopted around 1971, I became
a member of the Navy Department’s Navigation Symposium Board, and remember we discussed in detail the criteria that was established
for this design. They paralleled the already existing features found in sextants in the civilian maritime industry. The Navy’s
design incorporating these features was late in coming since the civilian sextants were in use before WW II and were far advanced
from the ubiquitous Navy’s standby during this period, the Navy MK II.
Listed are the MK III’s design features:
Light weight
Large size index mirror
Large size horizon mirror
Lighting system
Vernier reading to 6 seconds
Handle for
ergonomic fit
Wide
angle telescope
Non adjustable instrument error of less than 20 arc seconds
Military high impact absorbent case
Except for the handle and case, the Tamaya MS 733 and the C. Plath sextants met these criteria as did
a few others, but there was strong feelings in government to “Buy American” in contrast to today’s World Economy. Consequently,
M. Low of New York City was selected for the MK III program, Little is known of this company other than they were in New York
and in the instrument business. The sextants were made under license from C. Plath, of Hamburg, Germany who may have provided
the tooling. C. Plath aficionados take note, the design is clearly the same as the C. Plath Classic sextant down to the last
detail other than its ergonomic handle and large size high impact resistant case. This pedigree
is noted on page 119 of the book by Friedrich Jerchow,”From Sextant to Satellite Navigation, (1837-1987)
150 years C. Plath”.
After M. Low disappeared from the scene, Franklin Instrument of Rosboro, Pennsylvania must have
become the second contractor, but this is the only example of their sextant we have seen in 35 years. In this picture is Scientific
Instruments, of Milwaukee, WI. who was making these sextants as early as 1975. But they made fewer and fewer sextants as Satellite
Navigation (Sat Nav), the newly accepted electronic system, became more prevalent until GPS succeeded it. SIC stayed in business
until 2008 when they decided to close their doors. In one of our last conversations with the owners they told us sextants
were still being made in very small numbers for newly built U.S. Navy ships at a price of $4300.00. 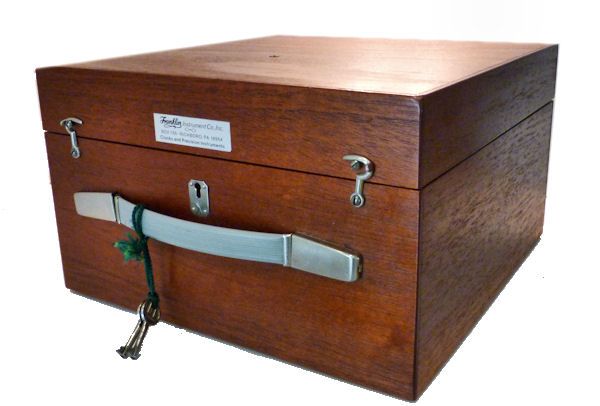 PROVENANCE: We were told by the former owner that the founder of a technology company, an American
Indian, was given the sextant by the Navy as a token of their gratitude. The Indian kept it in storage for years, and when
he met with financial difficulties he used it to pay a debt. That person sold it to us since he had no use for it. 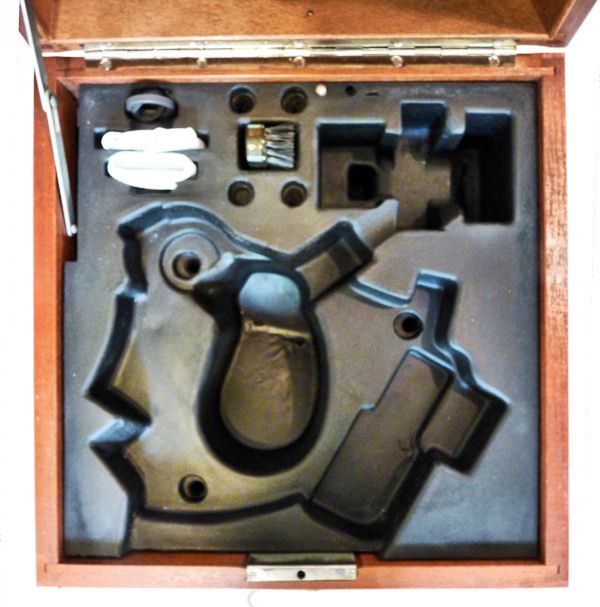 CONDITION:
The sextant shows no evidence of use . The interior of the case is new condition. Usually they are torn up in use from the legs
missing the holes. The exterior has only one minor light scuff. All its machinery works well. The horizon mirror shows some
age along the vertical edge that separates the clear and mirrored portion, but is still near new. A replacement is in the
pockets for both mirrors, a $250.00 value. The stainless screws and clamps are bright and shiny and the black finish shows
as new. The numbers match on the certificate. The lighting works. The index error is negligible, and there is a touch
of side error which is a good thing. The original inspection certificate is included. A C. Plath lock and two keys are fitted
to this Navy style case.
STAR RANKING:
This sextant and case rates 5+ STARS 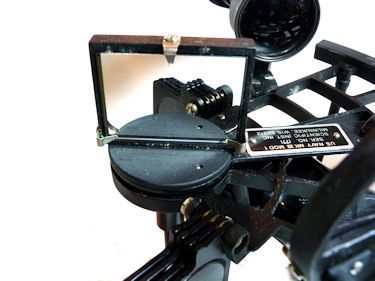 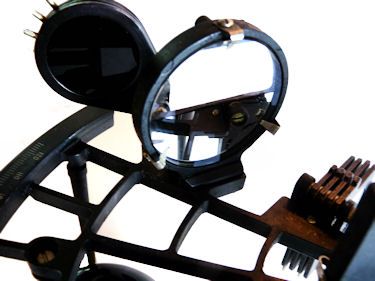 Vernier with 10 indents or each 6″ 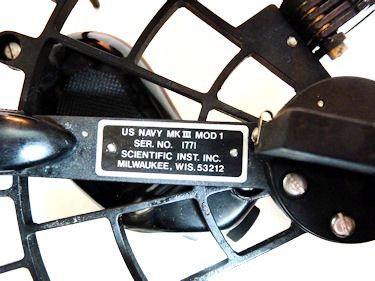 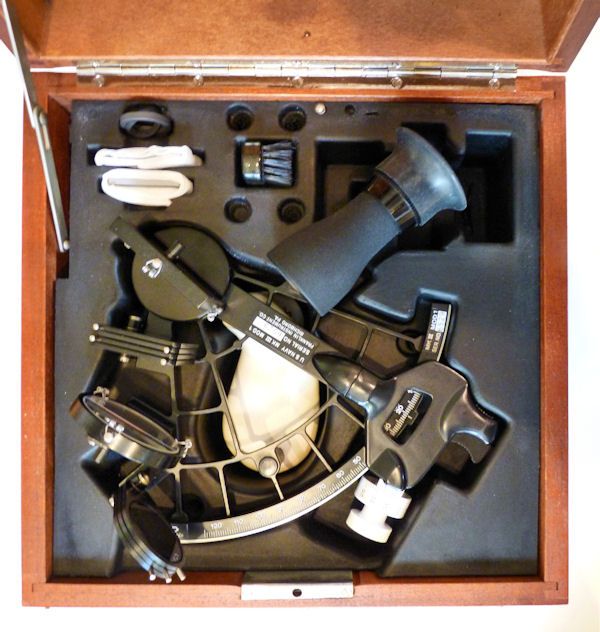 This is fine sextant is
in perfect condition and is backed by our guarantee of satisfaction. It requires someone who can appreciate the fine points
of a sextant, and is willing to pay an appropriate price for this level of quality and excellence.

OUR QUALIFICATIONS:
We are one of the few company’s still selling navigation instruments that know anything about them. For purposes of judging
whether Joel’s opinion counts, he was the editor of the chapter on sextants of the 1977 Edition of “Bowditch”, The American
Practical Navigator, NAVPUB 9; a member of the U.S. Naval Academy Navigation Symposium Board, 1975 -1978; the author of a
book on marine sextants, Cornell Maritime Press,1975, and the founding president of Nautech Maritime Corporation which partnered
with Tamaya of Japan in the introduction of their sextants and the famous NC-2 navigation computer, in the U.S. market. Joel
is also a retired Master Upon Oceans, and held a U.S. Navy “D” Qualification as a Senior Skipper – Oceans. From 1995 through 2000, he served as a Varsity Offshore Sailing Team coach at the U.S. Naval Academy. 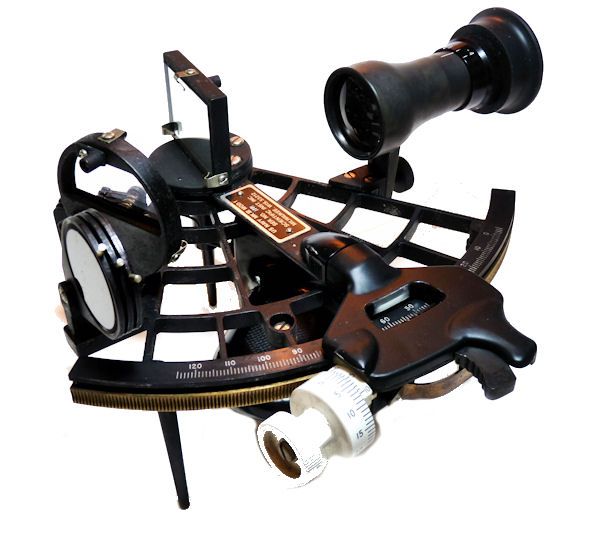